Summer 1976: A ragtag group of activists take to the Pacific in a chartered minesweeper. Their mission: Stop the wholesale slaughter of whales. 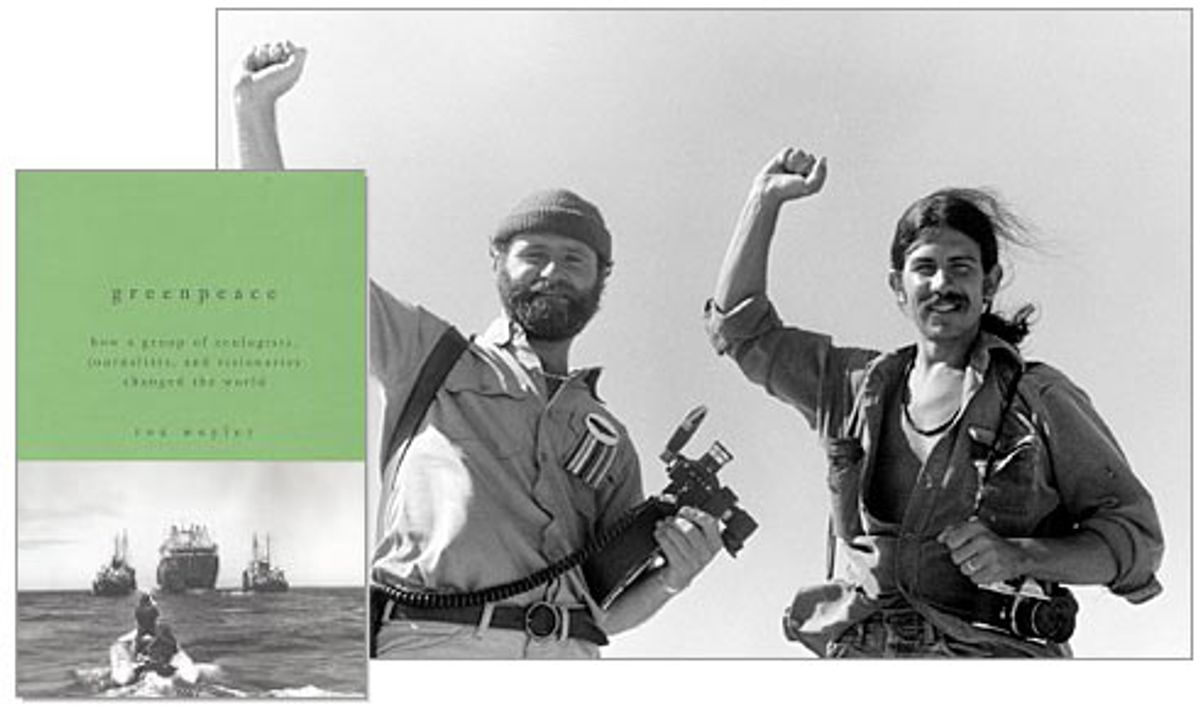 In 1975, Greenpeace confronted Russian whalers off the coast of California in a fishing boat. The following year, Greenpeace activists chartered a bigger, faster Canadian minesweeper and plunged deeper into the North Pacific to find the whaling fleets that now avoided them.

We pushed on before the following northeast trade winds, which helped us make good time and conserve fuel. On July 15 we came upon an eight-foot giant squid, floating dead, or near dead, on the surface of the ocean, with seven albatross making a meal of it. Most of the crew favored leaving the albatross to their banquet, but the oceanographers prevailed. Gary Zimmerman and Paul Watson hauled the squid on deck. Mary-Lee Brassard from Montreal leaned over their shoulders. The biologists marveled over the translucent Architeuthis dux, eight feet long in the mantel, plus 20 feet of writhing tentacles and a long, drooping club. The squid likely weighed 300 pounds. A large portion of the mantel had been torn away, and Zimmerman hypothesized a sperm whale could have attacked it. Marilyn Kaga and Paul Watson cooked some of the squid, but no one other than Watson ate any.

Journalist Bob Hunter could hardly believe his luck. Since we had not yet found the Russians, the squid provided an opportunity to get into the news. He interviewed the biologists and retired to his tiny sanctuary, below deck, where he typed a media release. Hunter cobbled together a story about giant squid and sperm whales, with quotes and impressions from the crew.

He theorized that an unconsumed giant squid lying about in the ocean could be construed as evidence that the sperm whale populations were depleted. His premise, although not rigorous science, was not unreasonable. Zimmerman, Pat Moore, and the other naturalists acknowledged that the sighting was at least consistent with a decline in whales. We possessed plenty of evidence from the whalers themselves that the sperm whale had been decimated. We had seen no sperm whales since leaving Vancouver, so reporting the decline in the whale populations seemed justified. Over the radio, Hunter dictated his story to a new volunteer in the Vancouver office.

A prompt media link had been an essential part of Greenpeace campaigns since the early campaigns. Rod Marining and Bobbi Hunter had served that function during the previous whale campaign, but with them now on the boat, media responsibilities had been left to a volunteer, who considered Hunter's story about the squid too half-baked and refused to release it.

The breakdown typified our new administrative problems. The Greenpeace media strategy had always been to attach political and scientific arguments to news stories that editors would run: action, personalities and human interest. Having no professional journalist in our home office now proved a costly oversight.

On board the minesweeper, we had no idea that this critical link had failed. We busied ourselves about the ship, knowing that we now closed in on the Soviet boats. The James Bay provided an altogether different environment than the homey Phyllis Cormack. The military ship had a wooden hull laid up on aluminum frames, to foil magnetic mines during wartime. Its watertight bulkheads and metallic rooms felt hard and cold.

I took regular radio shifts along with Paul Spong, Marilyn Kaga, and Matt Herron. Old equipment, plastic knobs and gauges lined the radio room. Posters of John Lennon and Apache leader Geronimo hung on the walls. The call letters of the James Bay were HP 2582 or, in martial parlance, "Hotel Papa, 2582." In press releases we referred to the ship as Greenpeace VII, but among the crew, we called the minesweeper Hotel Papa.

When we found out that the squid story had been censored by our office, Hunter raged briefly, then worked himself into a stoic acceptance and began filing stories directly to his old colleagues at the Vancouver Sun. In the grand scheme, the media lapse was a minor setback. We knew that the coming confrontation would make the news. In the meantime, fortunately, the whaling nations did our work for us. The Russians publicly called us "pirates," and the Japanese called us "religious fanatics." This greatly lifted our spirits. News also emerged from the International Whaling Commission that the previous year's catches had failed to reach quotas, and that the quotas would be cut 14 percent to 28,050 whales.

"This is just a pretense of scientific calculation," said Spong. Quotas for the larger whales -- the sperm and fin whales -- had been reduced the most, and the whalers now turned to the smaller minke and sei whales.

This year, we had a Washington, D.C., insider, whom we called "Deep Throat" after the Watergate leak, and we learned that the Russian whalers had circled Hawaii and now moved east as if making for the coast of North America. On July 16 we turned slightly west, but otherwise kept our heading southwest toward Hawaii as if we had no idea of the whalers' location.

In the radio room we scanned the frequencies used by the whalers. We regularly heard the two Soviet factory ships, the Vladivostok and the Dalniy Vostok.

The trade winds calmed to a moderate northwest breeze. As we headed southwest, physicist Norman Seaton rigged speakers outside the wheelhouse and piped Gustav Holtz's "The Planets" throughout the ship. A spontaneous ecstasy seemed to possess almost everyone. Even Moore and Watson got along. Hunter's previous depression vanished, at least publicly, as we approached the whaling fleet. Bobbi Hunter, burdened by financial worries, relaxed. Eileen Chivers and Barry Lavender took control of crew routine in the galley. Tollhouse cookies appeared regularly on the galley table. George Korotva, the irascible Czechoslovakian skipper, had calmed down now that we functioned as a competent team at sea.

Moore conferred with Matt Herron about navigational details. His frizzy blond hair had grown back to an Afro style and he wore one of the airbrushed rainbow T-shirts given to the crew in Vancouver. Moore and Herron hauled the Pacific Ocean charts onto the galley table and pushed colored cubes from the Risk game across the charts to represent ships. In military jargon, this is known as "Kriegspiel," or "war games." Although we fully intended peace and ecology, not war, Eileen Chivers commented that the exercise of tracking down the whalers had taken on a militaristic style. Greenpeace played on a dangerous edge between Gandhian satyagraha and militant aggression.

The Soviet fleet had approached within striking distance of the Greenpeace ship. The whalers would try to avoid us on their way to the coast of North America. Fuel remained our critical limitation, so we had to strike efficiently. Herron marked one day's running with the navigator's compass. Korotva traced the projected track of the whaling fleet. We could not afford to let them slip past us.

The Soviets carried an array of surveillance gear on the Vostok and could monitor our transmissions more easily than we could monitor theirs. On July 17, the Dalniy Vostok factory ship and fleet of harpoon boats proceeded along the 30th parallel, due north of Hawaii, steaming toward the coast of California, 400 miles west of our position. We kept our heading southwest as if making for Hawaii. This evasive heading had been Korotva's idea. "Don't run at them," he said. "They'll just bugger off."

The next day, the whalers closed to only 200 nautical miles northwest. "Now we go to them," said Korotva. Lance Cowan swung the James Bay northward to intercept the projected path of the Vostok fleet. The Soviet ships, possibly because they had cheated north to steer clear of the James Bay, turned south, thinking they'd passed us. We were now on a collision course. By the evening of July 18, we could hear the Russians over the radio, less than four hours away.

That night, however, the whalers turned sharply north, as if responding to our new heading. Hotel Papa and its crew of Rainbow Warriors gave chase. "They know we're on to them now," said Korotva. He shuffled his feet on the bridge, in high spirits. Through the window glass, six pairs of eyes scanned the horizon. On the deck, at the bow, and on the flying bridge under the snapping flags, a dozen more pairs of eyes watched. Pre-confrontation anxiety quickened everyone's pace.

Rex Weyler was a co-founder of Greenpeace International and a director of Greenpeace Canada until 1982. His photographs and essays have appeared in the New York Times, Smithsonian, Rolling Stone and National Geographic. He is the author of "Blood of the Land" and co-author of "Chop Wood, Carry Water."