Environmentalists give John Kerry high marks for his views on global warming -- yet they admit that the Democratic candidate is making too nice with the coal industry. 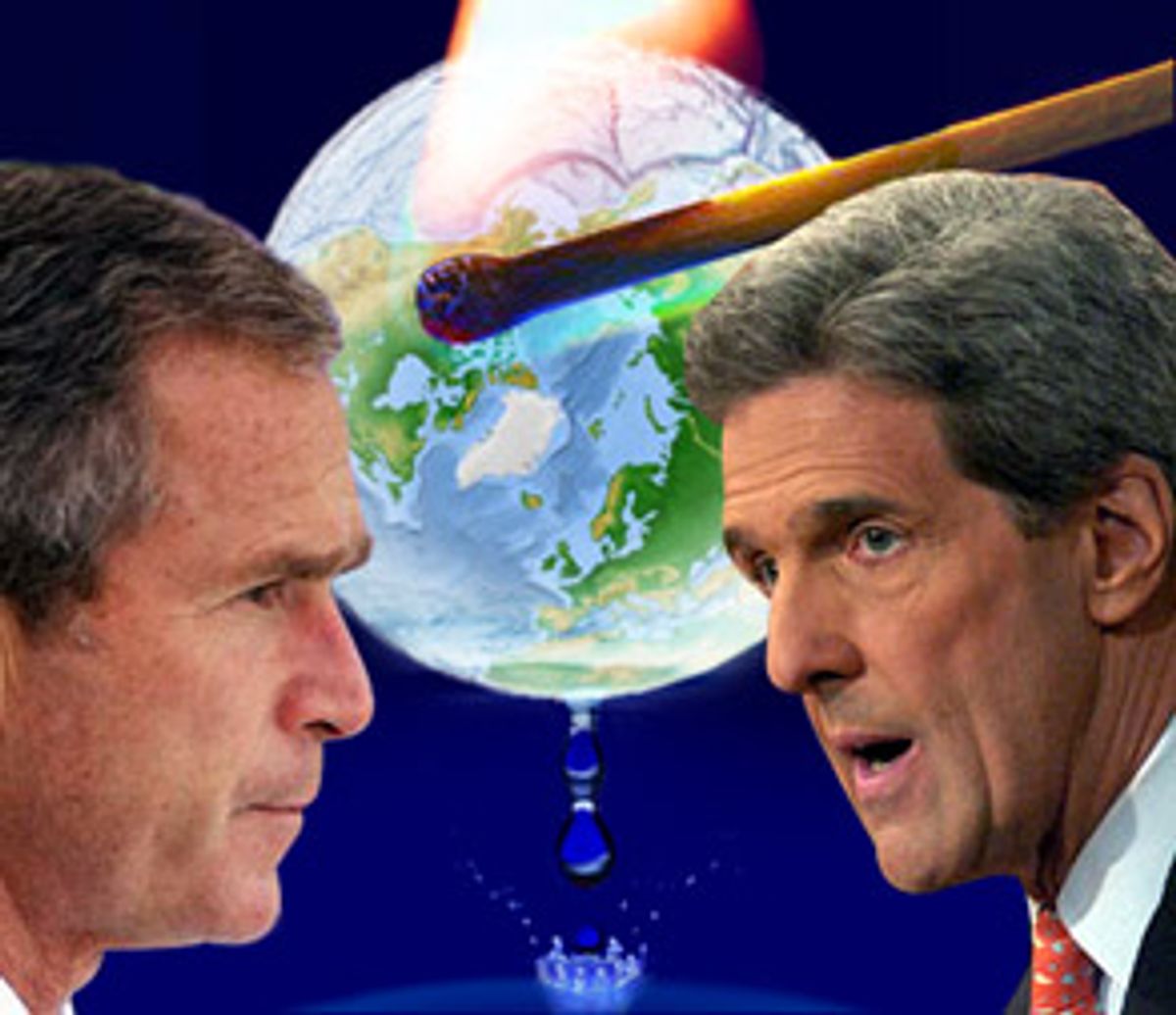 John Kerry is way ahead of George W. Bush on the global-warming issue, which frankly isn't that hard to do. Simply admitting that it's a problem caused by humans puts him light-years ahead of the president. While Bush consistently trumpets the "scientific uncertainty" surrounding global warming, Kerry has said global warming represents America's "biggest threat since the Cold War." And, yes, he said that after 9/11.

On the stump, though, Kerry has refrained from raising the specter of global warming, and struck an alliance with the coal industry, whose mines are based in swing states like West Virginia. While these are sticky issues for environmentalists, they remain loath to criticize Kerry. Instead, they are quick to point out that when it comes to global warming, Kerry and Bush are very far apart.

"It's like being at one end of the Grand Canyon and trying to shout down to the other -- there's a big gap," says Betsy Loyless, vice president for policy for the League of Conservation Voters, which has endorsed Kerry and gives the candidate a 96 percent score on his environmental record.

As a senator, Kerry strongly advocated for increasing the CAFE (Corporate Average Fuel Economy) standard. He introduced legislation with Sen. John McCain, R-Ariz., to increase the standard to 36 miles per gallon by 2015. When he challenged White House Cabinet officials to testify before the Commerce Committee about their approaches to fighting global warming, they failed to show up.

"Kerry knows this stuff -- he knows about climate change," says Ross Gelbspan, author of a new book about global warming, "Boiling Point," which argues that Bush's inaction on the issue amounts to "corruption disguised as conservatism." Kerry personally attended international climate talks, including the 1992 Earth summit in Rio de Janeiro, Brazil; the Kyoto, Japan, talks in 1997; and the 2000 climate talks in The Hague, Netherlands. He met his now wife Teresa Heinz Kerry at an Earth Day celebration and got to know her better at the climate talks in Rio. In her speech at the Democratic Convention, Heinz Kerry said: "With John Kerry as president, global climate change and other threats to the health of our planet will begin to be reversed."

While Kerry now says it's too late for the U.S. to make the Kyoto targets, which would have mandated that by 2012 the U.S. return to emission levels 7 percent below those of 1990, he has pledged as president to reenter international climate talks.

"One of Bush's first actions was basically to pull us out of the whole international debate on global warming," says Debbie Sease, national campaign director of the Sierra Club, which has also endorsed Kerry for president. "John Kerry was a leading voice on the need to take action and the need to take immediate steps."

Despite the strong differences on global warming between the two candidates, it's a subject that's been mostly absent from both campaigns. In Kerry's 14-page environmental plan, global warming gets just one paragraph. "The whole issue has been reframed as an 'energy issue,'" says Eban Goodstein, an economics professor at Lewis & Clark College in Portland, Ore. "In some sense, I think it's a code word for climate change. And that's a real problem. It's like the problem can't be named."

So rather than mention global warming, Kerry focuses on other reasons to reduce our dependence on foreign oil and develop alternative fuel technologies: rising gas prices, the war in Iraq, instability in the Middle East.

The Kerry campaign defends this approach: "I think the policy issues that directly affect what we're going to do about climate change are issues that voters care about greatly," says Roger Ballantine, senior advisor to the Kerry campaign on energy and the environment. "That doesn't mean that the voters necessarily identify the issue as climate change. John Kerry thinks that we'd be better off if we used less oil, and we need to make a national priority out of it. I think that people understand there are lots of reasons to do that other than climate change."

But with the broad public support for environmental issues, shouldn't Kerry be using this as a way to highlight a key difference between him and Bush?

Yes, says Robert F. Kennedy Jr., who's just written a book called "Crimes Against Nature" -- but Kerry can't get the message out: "The press won't cover climate change," Kennedy says. "It's not fast-breaking. They will cover security issues. You have to frame an issue in terms of security."

Kennedy contends Gore faced the same problem when he was running for president: "During the Gore campaign, people were complaining that he wasn't talking about the environment. But I talked to the Gore campaign and they said, 'We're talking ourselves blue in the face about it. It has no traction in the press.' They want to cover the political battle -- the red states vs. the blue states. And if you look, that's what they're covering now.

"Kerry's basically reduced to fighting a battle of platitudes because that's the only thing the American press now understands. The entire White House press corps should all drink poison Kool-Aid. That's the only way that they could bring dignity and integrity back to journalism. They are not journalists; they are stenographers for White House press flacks."

At the same time, Kerry is making big promises to the coal industry. He's pledged $10 billion for "clean coal" -- a phrase that the Bush/Cheney team is also fond of using but many environmentalists consider an oxymoron.

"Clean-coal technology is the fossil fuel lobby's answer to the emperor's new clothes," says Gelbspan, the author of "Boiling Point."

Ballantine claims that Kerry would spend twice as much as Bush on clean coal. "We want to spend a little less time fighting about whether coal is too dirty and make it cleaner to use," he argues. "When the president talks about clean coal, he talks about it in terms of this one futuristic plant that they want to build in the next 15 or 20 years. John Kerry is talking about deploying existing clean coal technologies now."

Coal plants can be made to burn somewhat more efficiently through a process called gasification -- which would result in less carbon dioxide per kilowatt hour of electricity generated -- but the industry has not adopted the technology.

The Kerry campaign is "promoting a technology that the industry has to be dragged into kicking and screaming," says John Coequyt, energy policy specialist for Greenpeace. "Yes, the technology exists, but nobody wants to do it. The solution is to pour a bunch of money at the utilities and drive them into doing it. What Kerry is proposing to do is basically bribe companies into building these plants."

And those plants would still release CO2 into the atmosphere, even if they would generate less soot. To reduce CO2 from coal, Bush and Kerry also talk about the importance of developing carbon sequestration, an experimental plan to capture the emissions and trap them underground. That too draws skepticism from environmentalists, who say the money should be invested in renewable energy.

"There is enough wind potential to provide all of the electricity in the United States with renewables," says Randy Hayes, founder of Rainforest Action Network and director of sustainability for the city of Oakland, Calif. "We don't have the transmission lines to get it out but that's where the government should come in with infrastructure support. That's an investment in a good future vs. an insidious subsidy to a polluting coal industry."

The Sierra Club's executive director, Carl Pope, has ridiculed Bush for trying to dress up dirty policy by using "sweet names like 'clean coal.'" But now that the Sierra Club has endorsed Kerry, it refuses to analyze his specific policy proposals. "We think that John Kerry's plan is better than the Bush administration's, both in proposals and in practice," says Kerri Glover, a spokesperson for the group. "We don't want to be critical because we think he's going to take us in a better direction. It's head and shoulders above what we have now."

Should voters then believe Kerry won't keep his promises to Ol' King Coal? Environmentalists aren't so sanguine on that prospect. "In this day, you are held to your words," says Kert Davies, research director for Greenpeace, who calls Kerry's coal policy "God Bless West Virginia." Kerry is "now making promises in these documents that must be carried out. We expect more vision from someone who we know is as intelligent on these issues as John Kerry."

The mining industry itself is certainly keeping score. It put out a statement applauding what its members see as a reversal of Kerry's previously tough stand on global warming: "In contrast to his past statements of support for binding international agreements to address climate change, his coal technology investment plan now acknowledges the unacceptable hardships that such a treaty could impose on coal mining and on the U.S. economy."

Environmentalists argue that instead of pledging to save the jobs of miners in West Virginia by subsidizing more efficient coal plants, Kerry should be emphasizing new jobs created by investment in renewable energy.

"Right now, they're falling into the old jobs-vs.-environment trap," says Davies from Greenpeace. "It's easy to pander to the coal miners and say we shouldn't do this on the backs of Americans. Yet a true, visionary clean energy policy would a positive thing. It doesn't have to be seen as costing coal miners their jobs. Frankly, I think that a lot of coal miners would like to do something else. And there aren't that many of them. And we can do better for states where those are their only jobs. They could be making wind turbines."

But for now environmentalists are willing to leave the battle over coal to another day. "From a political point of view, there is nothing to be gained," says Goodstein. "Environmentalists are so motivated and so angry that they're going to work for Kerry." Adds Hayes: "We all know that politicians say what they need to say to get elected. But if you look closely at environmental track records, if you compare Bush to Kerry, you have the devil and the angel."