Although briefly buoyed by the convention, the president's job-approval ratings are likely to continue their steady decline, giving Kerry reason for hope. But he should brace himself for an October surprise. 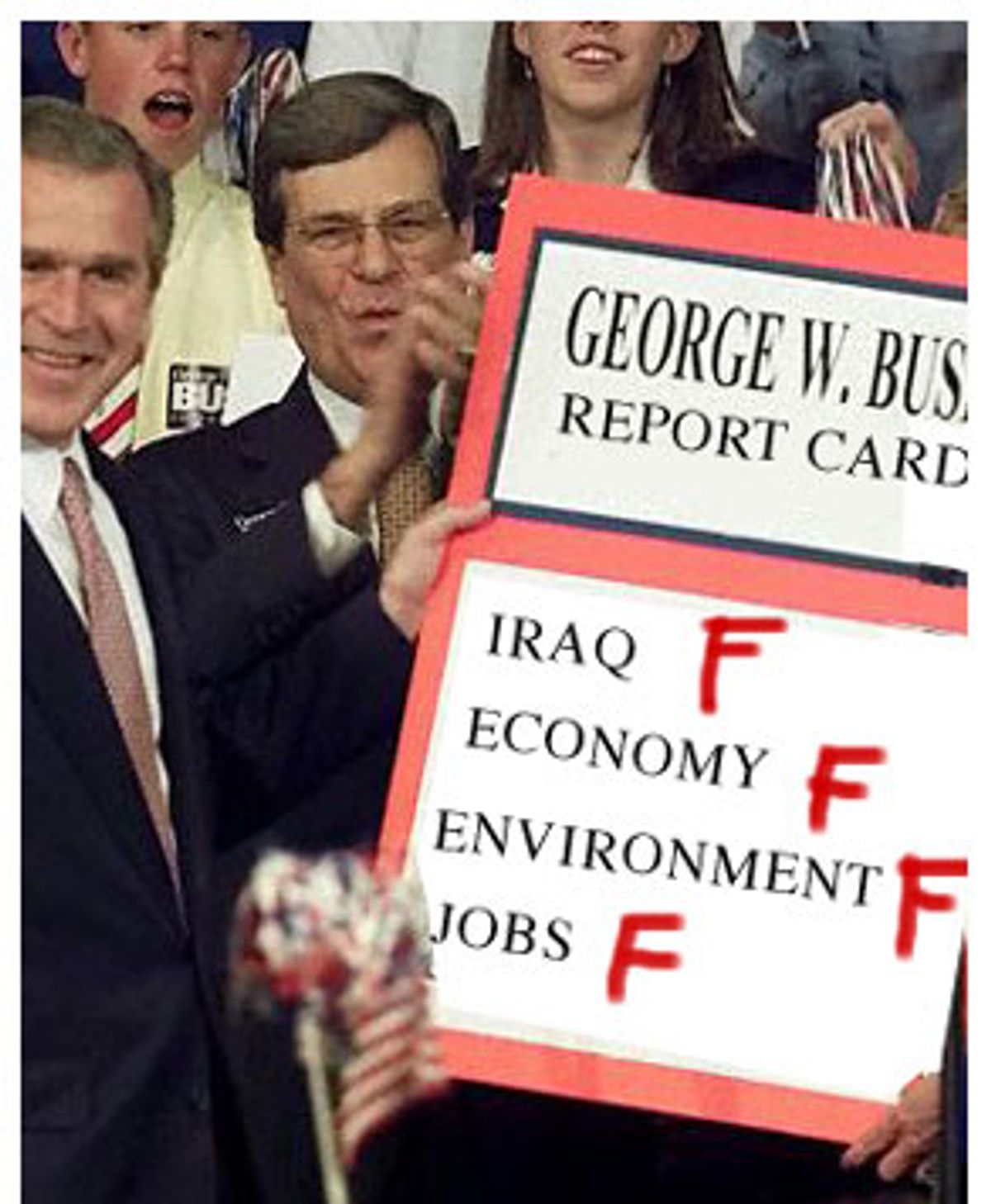 Of course, everyone who watches polls is watching the horse race. But let's look one more time at Bush's job-approval ratings. These remain useful because they provide continuous monthly data through Bush's whole term in office, enabling comparisons of Bush's convention bounce with earlier events in his presidency so far.

Up to last Friday, Sept. 10, Bush's September approval ratings clocked an average of exactly 50 percent, measured across six polls (Newsweek, Fox, ABC/Washington Post, Zogby, CBS/New York Times and Gallup/CNN). That could be a little high, because early September results were probably distorted by the Labor Day weekend -- Newsweek's 52-41 Bush lead and 50 percent approval, which slipped back to 49-43 and 48 percent approval one week later, are a case in point. Also, Fox News shifted the basis of its poll from registered to likely voters -- and Bush got a five-point jump in that poll. Still, to give Bush the benefit of the doubt, I'll factor into the equation a 47.2 percent average approval rating for August and 50 percent for September so far. This represents a gain of about 2.8 percent, which is Bush's sixth-largest monthly gain.

As I've written in earlier columns, about 90 percent of the variation in the changes in Bush's approval rating can be accounted for by just three episodes: the two months following 9/11, the first two months of the Iraq war, and the capture of Saddam Hussein in December 2003. To reach 90 percent, here's one more: the Republican National Convention in New York at the end of August.

Bush faces a steady loss of approval irrespective of events, which I estimate to be about 1.4 percentage points per month. Thus, his gain of 2.8 points comes in the teeth of an expected loss of 1.4 points. From this perspective, one can calculate the actual effect of the Republican Convention at a bit over 4 percentage points -- which is about 1 percentage point less than the bounce following Saddam's capture. It's about a third of what Bush got from the Iraq war, and only about a ninth of what he got from 9/11.

With about seven weeks to go, this equation suggests that if no new major episode occurs, Bush should lose about 2.1 percentage points between now and Election Day. In that case, he will face John Kerry with approval ratings very close to the lows of his presidency. And very close to the floor, below which he probably can't sink.

The moral remains the same. As I've said in earlier columns, an "October surprise" could tip the balance. The country should be braced for news on the terror front from Pakistan or elsewhere. Or perhaps we'll see the gift of a "You can go home soon" speech by Iraqi Prime Minister Iyad Allawi. One hears, at this stage of the campaign, all kinds of rumors. They can't be verified, but they gain weight from the fact that the Bush team tried to manipulate the terror war -- ordering up well-timed arrests in Pakistan -- to squelch Kerry's convention bounce last July. Who knows what else they have planned?

On the other hand, it's clear that Bush hasn't put the contest away. Kerry can win this thing for sure.