The end of oil? Guess again

Sure, the easy-to-find black gold is getting scarce. But Big Oil has a few cards left to play -- no matter what the cost to the environment or the developing world. 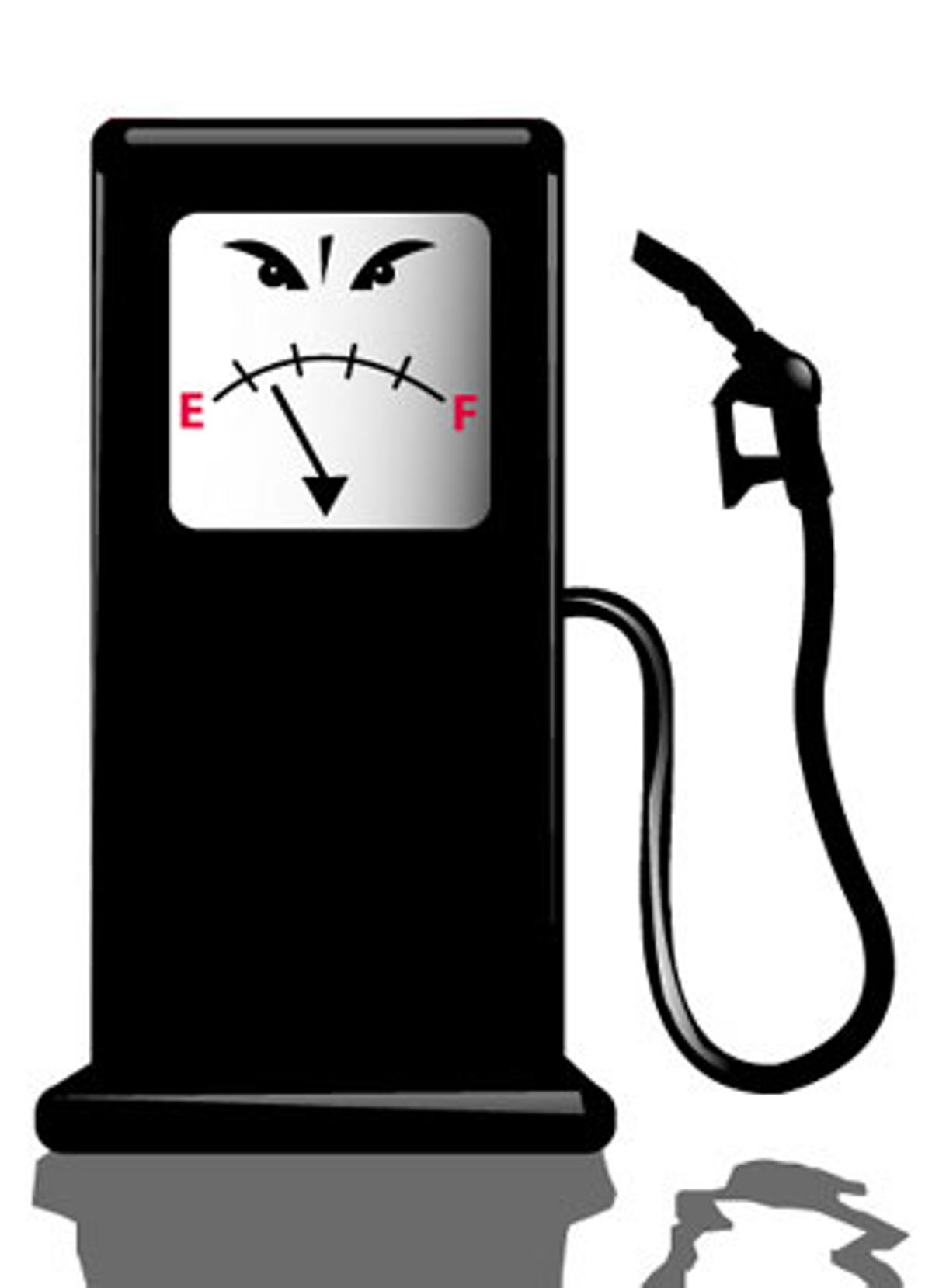 Are we "out of gas"? Is it the "end of oil," as the titles of two recent books suggest? Environmentalists and human rights advocates everywhere might breathe a sigh of relief, if so! Now, finally, we can move on from rapacious, climate-clogging, Nigerian-and-Colombian-slaughtering hydrocarbons to something better. Big Oil is going down! Right?

Keep in mind that the $2 trillion oil industry is well-practiced at rising miraculously from the dead. In 1879, the light bulb was invented, in a stroke destroying the entire market for oil, which was premised on supplying kerosene lamps. In 1909, the world's first Big Oil company, Standard Oil, was beheaded. In 1960, OPEC was formed and oil companies were effectively shut out of more than half the world's known oil reserves. In 1997, the Kyoto Protocol threatened to permanently curb global oil consumption. Now, in 2004, so many people want so much oil that it seems there just isn't going to be enough. Demand is overtaking supply.

True, from the perspective of the Big Oil companies, all the good stuff -- the kind of oil that makes itself known by conveniently appearing in puddles at the surface, generously spurting out of the ground under its own pressure, and politely declining multibillion-dollar state interventions for security -- is gone. But this, arguably, has been true since the early 1970s, when the flow of oil from stable, homey places like Texas and Oklahoma sputtered out.

Since then, Western oil companies have been successfully drilling for oil in progressively more hostile, unforgiving places, from the deeply frozen tundra of the north slope of Alaska and the densely populated swamps of the Niger delta, to the stormy North Sea and thousands of feet under the shifting waters of the Gulf of Mexico. And each foray has left broken communities and ecosystems in its wake.

Big Oil's quest to survive in the age of diminishing oil reserves will likely intensify the trend.

Although the big oil companies could easily ramp up their solar and wind power divisions in preparation for the end of oil -- for the cost of a single leg of a drilling rig, for instance, oil companies could build a solar-cell manufacturing plant that would make the price of solar power competitive with coal -- the evidence suggests they have quite different plans in mind.

Over the next two decades, the U.S. oil industry plans to spend the biggest chunk of its exploration budget hunting for crude not in Alaska, California, and Scotland but in developing countries. Whatever black gold they find will be subject to fewer environmental regulations and will have ready access to cheap, expendable labor, but will be unlikely to uplift the locals. The deadly violence endured by Iraqis, Nigerians and Colombians who have the misfortune to live near Big Oil's stomping grounds testify to oil exploitation's dire consequences for those unlucky enough to live near the oil patch. After all, the business of oil extraction in countries as diverse as Algeria, Angola, Congo, Ecuador, Gabon, Iran, Iraq, Kuwait, Libya, Peru, Qatar, Saudi Arabia and Trinidad Tobago has coincided not with increased prosperity but with a sharp downward slide in living standards.

Transforming unreachable "unconventional" fossil fuel resources into exploitable "conventional" reserves using technology and government subsidies is another likely tactic, one that will place a heavy burden on fragile and underprotected ecosystems. Across the bleak landscape of Alberta, Canada, for example, is a huge stretch of sludge called "tar sands." Back in the 1960s, the technology to mine oil from tar sands, like the technology to extract oil from the Alaska tundra, or the churning North Sea, didn't exist. These resources were, therefore, untouchable. Slowly, the technology improved, the price of oil went up, and the Canadian government offered generous subsidies. Today, the price of extracting a barrel of oil from tar sands has fallen from around $30 in the 1980s to around $5, and in 2003, the Department of Energy redefined no fewer than 180 billion barrels of tar sands as "conventional oil," increasing their assessment of the global supply of oil by a whopping 15 percent. Overnight, Canada leapfrogged over Iraq to become the country with the second-biggest oil reserves in the world.

And yet, mining oil from tar sands burns up to a fifth of Canada's natural gas supply, emits no less than six times more carbon dioxide than producing a barrel of conventional oil, requires six times more fresh water than the oil it renders, and leaves behind vast, festering lakes of wastewater while Canadian farmers shiver and their livestock parch. The acid rain from today's tar-sands operations alone could destroy Alberta's forests. And this dirty, wasteful development could go on for decades. Experts say there are 2.5 trillion barrels of oil locked in tar sands, that is, more oil than in all of the world's conventional reserves. By 2030, Canadian officials expect tar-sands oil to sate no less than 15 percent of the United States' ravenous appetite for oil.

Plans are already underway to shift consumers from oil to natural gas. All the major oil companies are actually oil and gas companies, and for many, gas reserves are growing while oil reserves are falling. Shell's CEO recently announced the company's hope that demand for gas will outshine demand for oil by 2025, making the current era a "window of opportunity" for oil companies to shift their customers from one fossil fuel to the other. Both John Kerry and George W. Bush favor the construction of yet another lengthy pipeline across the Alaska wilderness, this time to deliver natural gas, endlessly mouthing the industry's mantra, that natural gas is a "clean, environmentally friendly" fuel.

This is a half-truth at best. Methane-rich natural gas is a much more dangerous greenhouse gas than carbon dioxide. Already, about 2.3 percent of the natural gas produced by the industry leaks out of valves, pipes and other infrastructure, unburned. If that proportion makes it up to 3 percent, using natural gas is no better for the atmosphere than burning oil. Supplying consumers with more gas will also require dangerous, wasteful practices such as natural gas liquefaction -- that is, burning more fuel in order to cool the gas to negative 260 degrees Fahrenheit, at which point it becomes liquid and thus easier to transport. Keeping the gas pipelines full will exact its pounds of flesh just as effectively as oil, too. All the largest remaining reserves sit under conflict-ridden, densely populated regions in countries such as Nigeria, Angola, Venezuela and Indonesia.

If Big Oil, through these and other tactics, can't adequately slake Americans' thirst for cheap energy, U.S. leaders have another plan: Burn more coal. This time, they say, "clean coal" technologies will be employed -- that is, the coal will be combusted to make hydrogen gas, the resulting clouds of carbon dioxide stashed away, "sequestered," never to be heard from again. The technology to do this is nascent and unproven. Worse, one of the least understood, most poorly regulated regions on earth will likely prove the final dumping ground for the excess carbon dioxide: the deep oceans. We may never fully know the damage this might wreak: Compared with deep-sea oil drilling, deep-sea oceanography is woefully underfunded, although many oceanographers say that the uncharted abyss may hold as much biodiversity as tropical rainforests.

All of these developments will cost money and require new generations of technology, of course. Today's high oil prices and angst over the security of our petroleum supplies can only help, by fattening Big Oil's coffers and beefing up public support for whatever subsidy oil companies promote as essential to our "energy independence." If so, our worries over diminishing oil supplies might presage not the "end" of oil but rather the beginning of a renewed assault on the precious resources buried in our planet's crust.

Sonia Shah is a freelance journalist and author of "Crude: The Story of Oil" (Seven Stories Press, September 2004).