"President Bush thwarted our attempts at every turn"

The widows known as the "Jersey Girls" changed history by demanding an independent 9/11 investigation. Now they want to change who's president -- though some voted for Bush four years ago. 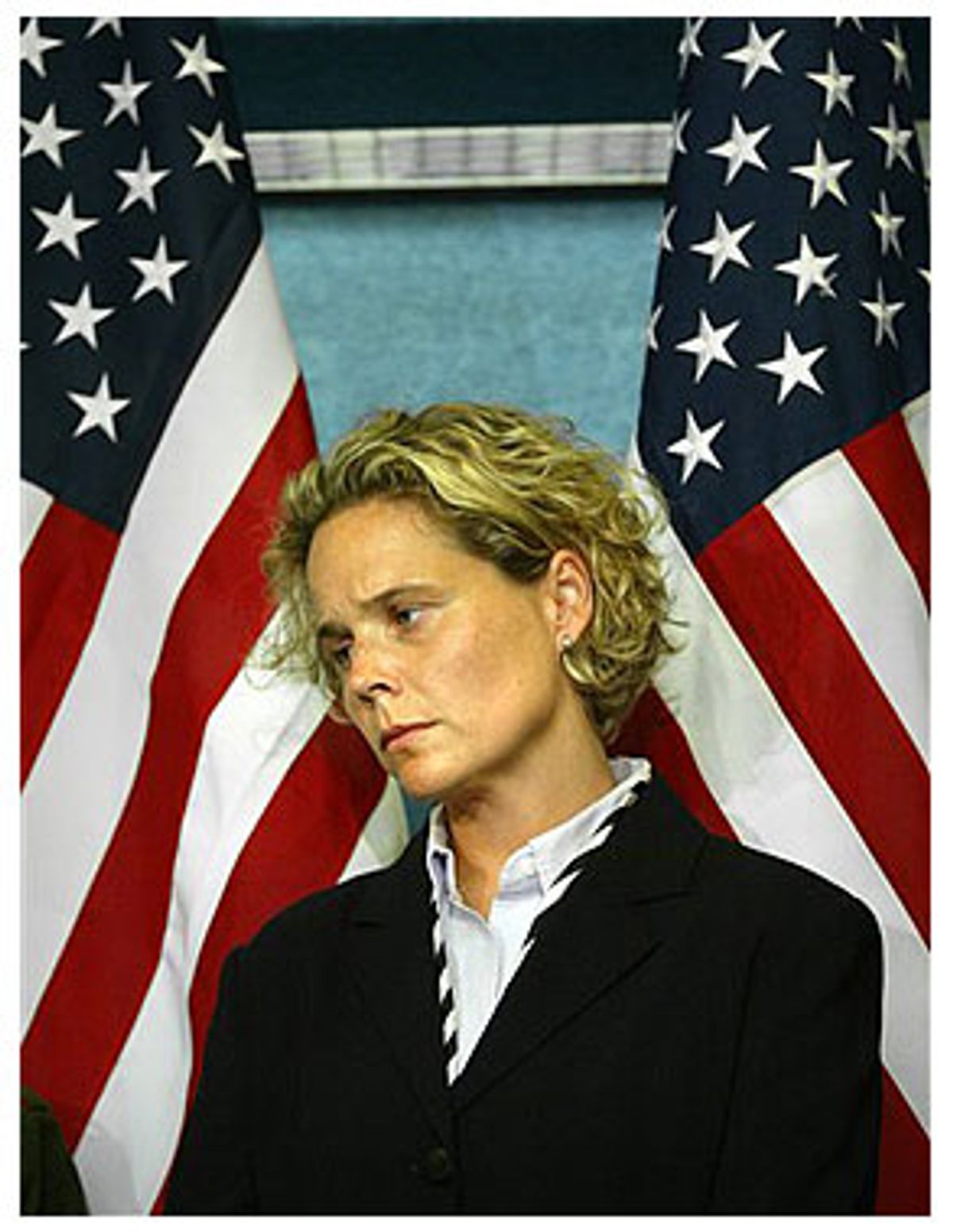 Over the last three years, the group of 9/11 widows turned activists dubbed the "Jersey Girls" have become a fixture on the Washington political scene. Some of them are Republicans, others Democrats or independents. But they are all determined to hold official Washington accountable for the attacks that killed their husbands and nearly 3,000 others. They have held news conferences, lobbied members of Congress, pored over documents, and forced the White House to accept an independent commission to investigate the Sept. 11, 2001, attacks. Along the way, the women have learned about coverups, obfuscation, political cowardice, deceptions and the dangers of eschewing international alliances for a go-it-alone foreign policy.

And their conclusion: For the sake of the country's future, John Kerry must replace George W. Bush.

Gathering at the National Press Club in Washington on Tuesday, the widows announced their endorsement of the Massachusetts Democrat for president, a move made "in good conscience and from our hearts," as former Bush supporter Kristen Breitweiser told the news cameras. "In the three years since 9/11, I could never have imagined I would be here today, disappointed in the person I voted for, for president," she said. Added fellow Jersey Girl Patty Casazza: "It was President Bush who thwarted our attempts at every turn."

The widows said they endorsed Kerry because three years of studying the facts has convinced them he will do a better job than Bush at protecting the nation. "This was not an easy decision to make. We agonized over this," said Monica Gabrielle of West Haven, Conn., an honorary Jersey Girl. "We have always been very careful about not being partisan. We have always attempted to uncover the truth. We have always looked for the greater good." Still, the women said they expect to be trashed as partisan hacks.

"We were joking amongst ourselves yesterday that we should come down here geared up in football pads and helmets, because we were anticipating personal attacks," Breitweiser said. "Some other 9/11 family members have supported President Bush, and I think we have always been respectful of anyone's points of view. And I hope that going forward, the debate and dialogue will be about the issues and it will be respectful and lively. But most important, respectful."

The endorsement was a sword clanging against Bush's political armor. Polls show that voters rate Bush high on his handling of 9/11 and its aftermath, and Republicans have been quick to exploit that approval with television ads and their recent convention, held in Manhattan around the theme of Bush's leadership against terrorism. Meantime, the families of 9/11 victims are split on whom to support for president, with many for Bush.

The Jersey Girls' political foil is Deena Burnett, widow of Thomas Burnett, one of the passengers on United Airlines Flight 93, which crashed in Pennsylvania. Burnett, who lives in Arkansas, spoke to the Republican National Convention two weeks ago, giving an emotional account of her last conversations with her husband from the plane. "The heroes of 9/11 weren't created that day," Burnett told the convention. "Their actions were the result of virtues practiced over a lifetime." Delegates wiped away tears.

Watching the convention on television, Breitweiser felt not teary-eyed, she said, but frightened. She found the speakers angry and bellicose, and she worried that the Bush administration seemed to revel in war. "I am scared [by] the mentality that my daughter, who is 5 years old, is being handed a tomorrow that will be a war for a lifetime. My husband was killed on 9/11. I do not want to lose my daughter 18 years from now when she's walking or living in a large city, and it's payback for our actions in Iraq," Breitweiser said. Later she told me in an interview that she voted for Bush in 2000 because, well, she's a Republican. "I'm not a Democrat!" she said, when I asked if her endorsement of Kerry meant that she had switched parties.

On Tuesday I was unable to reach Deena Burnett, whose name is not listed in the phone directory, for comment about the Jersey Girls' endorsement of Kerry. But a telephone interview I conducted with her two years ago was revealing for her lack of knowledge about the origins and funding sources of al-Qaida. Burnett is a lead plaintiff in a massive lawsuit against wealthy members of the Saudi royal family and Saudi establishment filed by South Carolina trial lawyer Ron Motley, who is trying to prove that the 9/11 attacks were financed out of the kingdom. Interestingly, many people who share those suspicions about the Saudi role in 9/11 also tend to question the Bush family's close ties to the House of Saud, but not Burnett. When I spoke with her for the profile, I expected to talk with her about the substance of the case. Instead, she directed me back to the lawyers, pleading ignorance of such details as which Saudi prince made which overtures to the Taliban. She clearly wasn't a document hound.

The Jersey Girls are. They have read seemingly every scrap of information about 9/11 and al-Qaida, from news articles to affidavits to footnotes in obscure government reports. And their command of the facts is what has made them so effective. On Sept. 18, 2002, when much of the public was still sympathetic to the Bush administration position that the attacks could not have been foreseen or prevented, Breitweiser gave a statement before the joint House-Senate investigation into intelligence lapses; it may have changed the course of history.

In a concise, straightforward manner, she laid out the facts far more effectively than had any senator or representative on the panel. She asked how, for example, the CIA could fail to locate hijackers Nawaf Alhazmi and Khalid al-Midhar, who had entered the United States despite being on a terrorist watch list, when one was listed in the San Diego phone book and both roomed with an undercover FBI informant. The day after her presentation, the White House -- once firmly against an independent commission -- reversed itself and endorsed the idea. And it was the 9/11 commission that would later find no operational ties between Saddam Hussein and al-Qaida, one of the key reasons Bush gave for invading Iraq.

On Tuesday, the widows cited the invasion of Iraq as one of their top reasons for supporting Kerry. "Unfortunately, before the work in Afghanistan was complete ... this administration moved our most precious resources, America's sons and daughters, into Iraq, without the support of our allies. Iraq had nothing to do with 9/11, and that is what we learned from the 9/11 commission's final report," said Lorie Van Auken of East Brunswick, N.J. "Sept. 11 was an enormous intelligence failure, and yet nothing was done to fix our intelligence after 9/11, and that same intelligence apparatus took us into Iraq. So it's doubly frustrating to learn that Iraq had nothing to do with 9/11." Van Auken said she is also worried that with military forces stretched thin, her 17-year-old son and 15-year-old daughter could be called up in a draft.

The women said they approached Kerry about the endorsement, not the other way around. Their requests to meet with Bush were rejected. Breitweiser and Gabrielle plan to campaign actively. In Breitweiser's case, it will be difficult, because she hasn't traveled in an airplane since her husband died. "I have serious anxiety about getting on a plane," she said. "But that's how committed I feel."