"Head in the Clouds"

Penelope Cruz stars with real-life couple Charlize Theron and Stuart Townsend in this frippery romanticizing the fight against fascism. 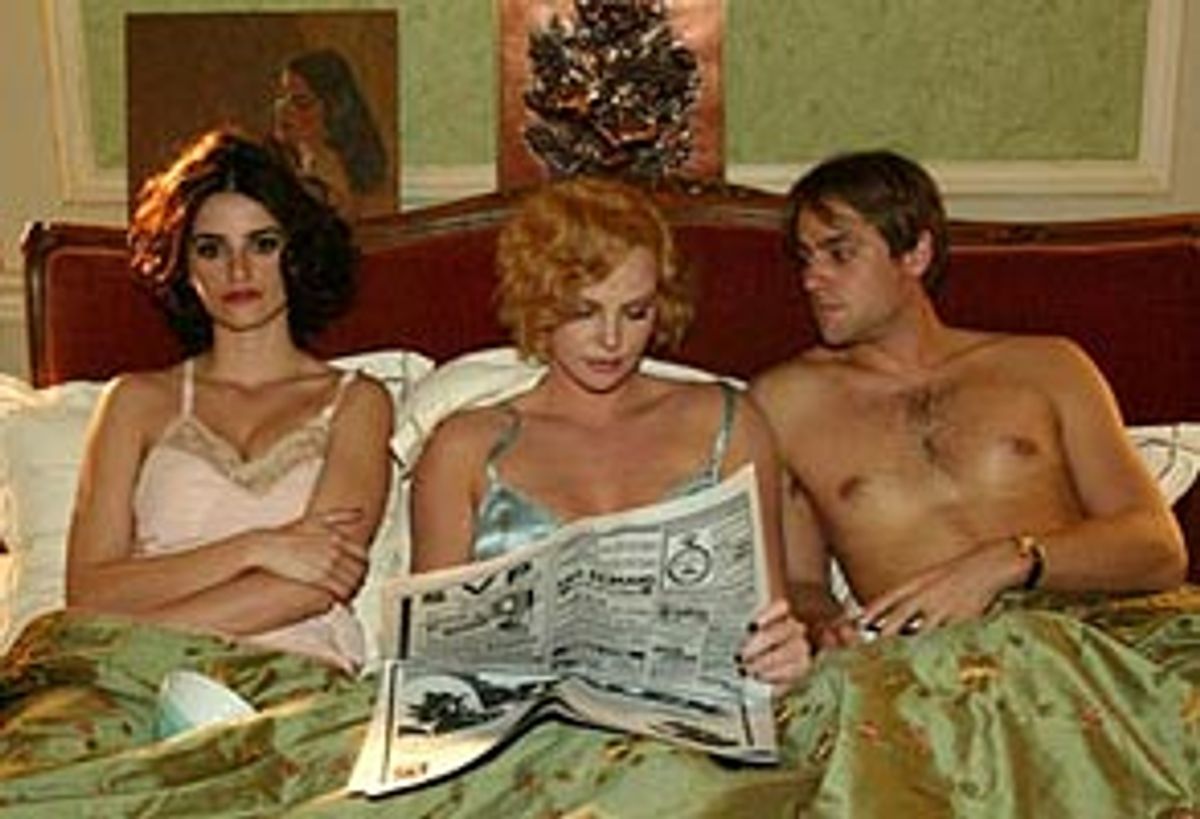 If, during the '30s, MGM had hired leftist writers to dream up the sentimental tributes to wartime duty that the studio turned out during World War II, the result might be something like Australian writer-director John Duigan's "Head in the Clouds." That title is an apt description of where Duigan's own thoughts must have been when he made the movie.

"Head in the Clouds" is a tribute to the noble sacrifices made in the fight against fascism -- only here that fight encompasses the Spanish Civil War as well as World War II. The movie isn't offensive, like William Wyler's nauseating 1942 film "Mrs. Miniver." For the first hour it's plummy enough to be entertaining in its ludicrous fashion, the sort of thing you might hope to stumble across on cable when you're home sick and want to wallow in a little movie-ish luxury.

After a brief prologue, our story opens at Oxford in 1933. (We know it's Oxford because people say things like, "We're having a bit of a beano at the weekend.") Guy (Stuart Townsend) is the son of a Dublin police officer who was killed during the "troubles." One night in a show of chivalry, Guy gives shelter to Gilda Besse (Charlize Theron), daughter of a free-spirited American mother and a French champagne tycoon. (We have to take the movie's word that he's French because he's played by Steven Berkoff and, like every role Berkoff plays, appears to be a Nazi.) When the politically committed Guy admits, "I don't believe much in countries," and rich golden girl Gilda responds, "Neither do I," we know they're soul mates.

Romance blossoms and is then cut short as Gilda goes off to see the world and Guy, displaying the concern with the downtrodden that will keep him in shabby suits for most of the picture, goes to teach in London's East End. One night at the cinema, Guy spots Gilda as an extra in an American movie. Shortly after, a letter arrives from Gilda inviting Guy to visit her in Paris. There she has reinvented herself as a photographer whose commercial portraits finance her avant-garde work. (We know her photos are avant-garde because they feature poor people and prostitutes.)

Gilda's assistant and sometime model is Mia (Penelope Cruz), the Spanish daughter of an anarchist coal miner whose dreams of becoming a dancer were ended by the thugs of Franco's army. Strengthened by her soulful, salt-of-the-earth limp, Mia has worked her way up from being a striptease artiste to having a meaningful career as a nurse.

Rekindling his romance with Gilda, Guy stays on in Paris and soon the two of them, Mia limping by their side, are a fixture in the City of Lights. Alliances between the three form and tangle.

During an evening on the town, Gilda and Mia perform that popular staple of art-house period pictures, the Dance Number With Lesbian Overtones. (Apparently Mia's impediment doesn't affect her ballroom dancing -- she's the Mel Tillis of Spanish refugee ballroom dancers.) With civil war raging in Spain, Guy and Mia are drawn to join the Loyalist struggle. Gilda, who secretly believes a fortune teller's prediction that she will die young, doesn't want to lose either of her lovers and tries to make them feel their contributions will be in vain.

War ravages Spain. Mia, her dedication to the cause evident in the saucer-size circles under her eyes, tends to the wounded. (At times, Cruz's pale complexion and dark eyes make it look as if Marcel Marceau had wandered into "For Whom the Bell Tolls.") Guy does what he can to make more work for Mia's counterparts on the Fascist side. Both write letters to their beloved Gilda that are left unopened in her Paris apartment.

Years pass. The Spanish Civil War turns out to have been a mere dress rehearsal for the larger conflagration to follow. Guy works with British intelligence to aid the French Resistance, an enterprise that entails smoking many harsh cigarettes and surreptitiously listening to coded messages broadcast on the BBC. The Nazis take over Paris, hogging the best tables at restaurants and rarely offering to get the check. Events conspire to reunite the long-separated Guy and Gilda for their rendezvous with destiny. Will Gilda see the light and join the cause? Will Guy ever get a decent suit? Will Mia survive to fox-trot in a free Europe?

With a plot like that, a movie doesn't have to do much to be fun old-fashioned romantic trash. To his credit, Duigan doesn't appear at all bedeviled by the guilt that affects some political filmmakers over the display of movie luxury. (For years, Bernardo Bertolucci ignored the lush, sensualist nature of his movies, insisting that his professed Marxism was a truer expression of him.) He wants "Head in the Clouds" to be a rousing tale of political commitment and a plush movie romance.

His production team, cinematographer Paul Sarossy (who has shot many of Atom Egoyan's movies), production designer Jonathan Lee, and costumer Mario Davignon, have put together an ode to '30s glamour. Sarossy shoots the movie in warm browns and golds that give Lee's interiors a glowing richness. And though I can't be certain, there are a few outdoor shots that look enough like a storybook illustration to make you wonder if Lee hasn't -- artfully -- employed painted backdrops. Davignon's clothes, tweeds and wools and silks, move with the actors, conveying elegance and comfort.

Theron, her hair going from a blond Louise Brooks bob to soft, marcelled waves, emerges here as one of the movies' most spectacular clothes horses. The gowns she wears hang beautifully on her long frame, and her accessories are often well-chosen. Acting the spy in one scene, she's given a fedora arched perfectly over one eye, and there's a shot of her with a row of Bakelite bracelets ascending her arm that recalls the famous Cecil Beaton photo of the socialite Nancy Cunard. (Theron's wittiest outfit is her most minimalist. Wearing only a fedora and a tie as she hovers over Townsend in the bathtub, she looks like a Vargas girl come to life.)

Duigan's political concerns have usually been at the center of his movies, even as light a movie as the charming teen romance "Flirting." Here, as in "Flirting," the politics don't violate the story or feel clumsily appended to it. The trouble is that Duigan believes he's making a serious political drama when the thing that makes the picture watchable is the luxe soapiness of it all. It's fun, but it isn't believable for a minute, especially next to the recent examples of "Charlotte Gray" and "Enigma," wartime melodramas that are both enjoyable in an old-movie sense and credible as grown-up drama.

What is credible here is the chemistry between real-life lovers Theron and Townsend. It's a pleasure to watch two people who so obviously adore each other. And Townsend, who gets to show emotion here -- something not required of him in either "Queen of the Damned" (where nobody was looking at anything besides Aaliyah, anyway -- and who could blame them?) or "The League of Extraordinary Gentleman" -- finally seems like a human being. But the role is a conceit that hasn't been fleshed out, and that's even truer of Theron's Gilda.

It's no news that Theron is luscious to look at. And anyone still debating her ability as an actress after "Monster" (like the bitchy naysayers who took the predictable line of claiming she was praised only because she was a beautiful woman who chose to make herself ugly) just seems too blinkered to see what was in front of them. From moment to moment, what she does in "Head in the Clouds" is convincing. (She's one of the few actresses around who can play soft without going to mush.) It's the role that's a crock -- part bohemian free spirit, part society wastrel, and part Humphrey Bogart, a reflection of the whole dress-up tone of the picture. God knows Theron has the star power to be at the center of a romantic wartime melodrama. But the actress has moved beyond the charming-model stage of her career.

You can't blame a director for wanting to indulge in the glamour of the '30s and the romance of fighting the fascists. But "Head in the Clouds" makes you wish that Duigan had either worked to make the film believable as serious drama or gone unabashedly for tear-jerking. The picture's ending is too much of a bummer to work as a weeper (tear-jerkers make you feel good about being turned into a puddle of snot), and the movie as a whole is way too mushy for the tragic dimension Duigan strains for. But, silly as most of it is, it's not shameful. Duigan should keep trying to meld his conflicting impulses -- a political filmmaker adept at romantic melodrama (especially one who doesn't appear doctrinaire) might turn out some lively work.

"Head in the Clouds" contains one notion that's almost heretical on the left right now: the belief that war can sometimes make a difference. These days, even those of us against the war in Iraq may blanch at the sight of antiwar protesters carrying signs saying "War is never the answer," and so on. Sometimes it is, and it's an ugly truth in danger of being lost on the left right now. Good for Duigan for not losing sight of it.