With the race in a dead heat, John Kerry accuses the president of not telling America the truth about the disaster he created. 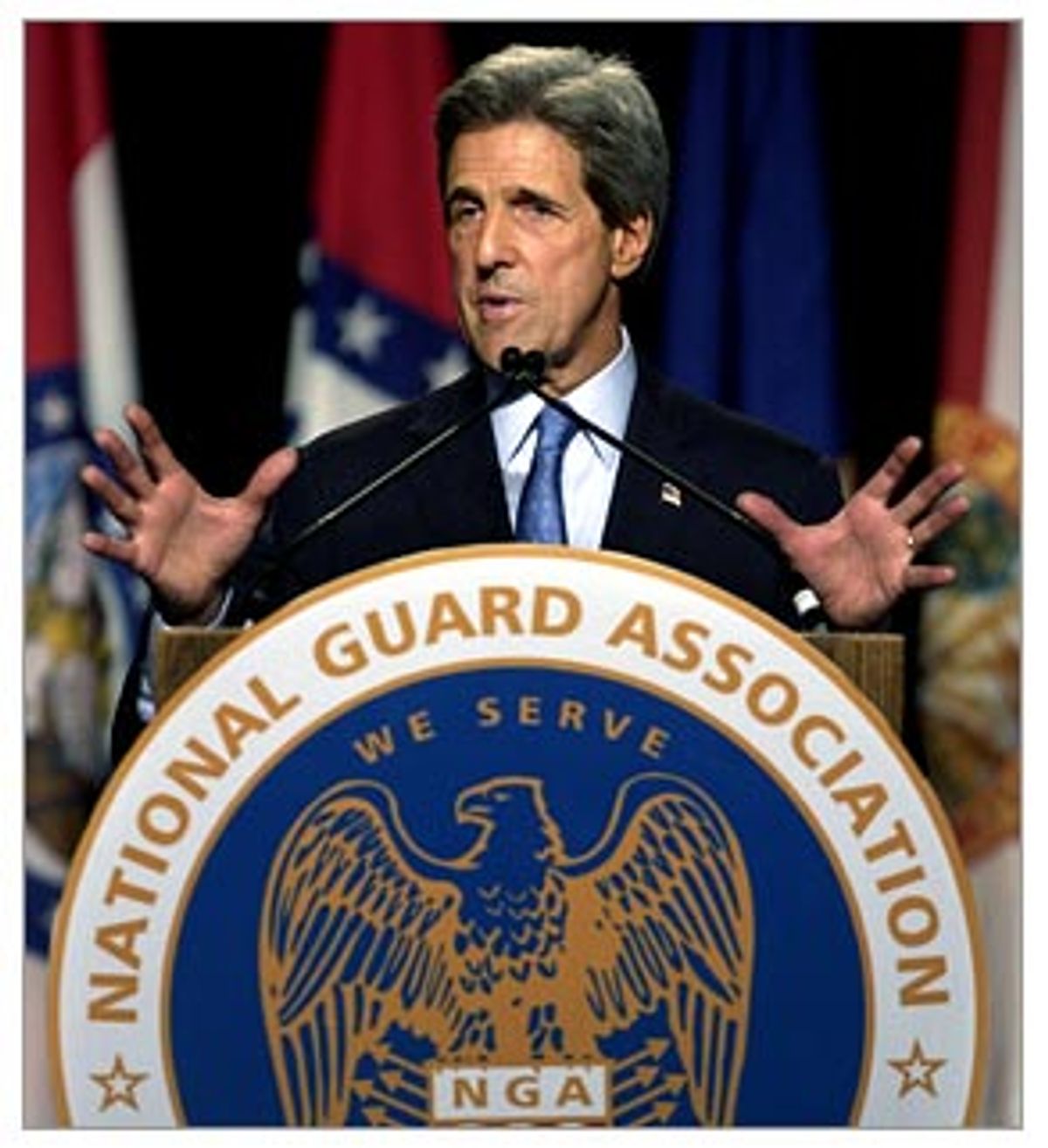 Forty-two U.S. soldiers died in Iraq in June. Fifty-four died in July, 66 died in August and -- if the second half of this month is as deadly as the first -- 92 will die before September comes to a close. All told, 1,024 young Americans have died in the Iraq war, almost 900 of them since President Bush landed on that aircraft carrier and proclaimed that the United States had "prevailed" in the "battle of Iraq."

Bush doesn't mention those dead soldiers much on the campaign trail. They don't get a single word in his stump speech, and the president said nothing about them when he gave an Iraq-specific speech Tuesday to the National Guard Association. There was no moment of silence, no talk of "fallen heroes" or the "ultimate sacrifice." And there was no acknowledgment at all, really, of what even some leading Republicans are now saying: Iraq is a mess and the United States is in deep trouble there.

Forget "Two Americas." The presidential campaign is -- for the moment, at least -- now about "Two Iraqs."

Emboldened by polls showing that the presidential race is once again a dead heat, Sen. John Kerry unleashed a full-frontal assault on George Bush Thursday for misleading the American people about the war in Iraq. Kerry said the president has "failed the true test of leadership" by hiding the facts about the war: a thousand U.S. dead, a growing violent insurgency, entire regions controlled by terrorists, and hopes for security and stability slipping "farther and farther away."

"This is the truth, as hard as it is to hear," Kerry said Thursday in a speech to the same National Guard group that Bush addressed Tuesday. "You deserve a president who will not play politics with national security, who will not ignore his own intelligence while living in a fantasy world of spin, and who will give the American people the truth about the challenge our brave men and women face on the front lines."

The sharp critique was an effort to break through the noise of the presidential race, to focus attention on Bush's record and to brush away Dan Rather, Kitty Kelley and the endless stories about shakeups in the Kerry campaign. Earlier this week, former Democratic Rep. Tony Coelho launched a broadside attack at the Kerry campaign, claiming that the candidate was unfocused and that the addition of so many former Clinton aides to the campaign staff had left "no one" in charge. Joe Lockhart sniped back. But Mike McCurry, another former Clinton press secretary newly ensconced in the Kerry campaign, said Thursday that the real way to silence critics is to "start executing better."

"That stuff goes away pretty quickly if you start to get some momentum," McCurry told Salon Thursday as Kerry finished speaking. "People don't write those stories when you've got things going in the right direction. I think we're probably coming out of that. Kerry's clearly getting sharper and tougher on the road, and I think some of polls are starting to move."

McCurry is certainly right about the latter point. While polls taken immediately after the Republican Convention gave Bush a double-digit lead and sent Democrats into a full-scale panic, polls released Thursday show that Bush's bounce has disappeared. A new Pew Research Center poll has the race dead even among registered voters and Bush leading by a statistically insignificant one point among likely voters. Two other new polls offer similar results.

Even before the new polling came out Thursday, Democratic strategists maintained that the race was Kerry's for the taking, but only if he takes it. The "fundamentals" are there for him. Polls show that voters disapprove of the way Bush is handling the war in Iraq and that they do not believe he has a plan for ending it successfully. They're split on whether the war was worth the cost. They disapprove of the way Bush has handled the economy. And they're unhappy with the direction in which the United States is headed more generally. In the latest Annenberg poll, voters say by a 51-42 margin that the country is "seriously off on the wrong track."

In their most recent Democracy Corps memo, Democratic strategists Stanley Greenberg and James Carville say that -- even at the height of the Bush bounce -- voters still wanted change. "They are upset with Bush's direction on Iraq and the economy and have serious doubts about him. They respond strongly to Kerry's message."

But voters can respond to Kerry's message only if they hear it. When the Democracy Corps pollsters distilled the messages of Bush and Kerry into concise 125-word statements, voters preferred Kerry's to Bush's by a seven-point margin. Kerry's message was even more popular among undecided voters and voters in battleground states.

The problem for Democrats: While George Bush and Karl Rove have done a masterful job of turning Kerry into a sound bite -- if you haven't heard that Kerry is a flip-flopper, you haven't been living on Earth this year -- there is still little evidence that Kerry or his campaign is capable of distilling his message into a simple, concise statement. The campaign is still all over the map -- one day it's "W" stands for "wrong," the next day George Bush is the "excuse president," and if it's Thursday it must be time to talk about Iraq. Kerry is trying to get the focus onto Bush's record in the White House, but at the same time Terry McAuliffe is vowing to make Bush's National Guard service -- or lack thereof -- a central issue of the campaign.

And even when Kerry can focus hard on one subject, the legendary closer still isn't in his fighting trim. Kerry's attack on Bush Thursday was strong on paper but less so in person. Part of it was the audience. While the National Guard members and their families greeted Bush with a thunderous welcome Tuesday, they mostly sat on their hands for Kerry's speech. Even those who were critical of the planning and provisions for the war remained fiercely loyal to their commander in chief, and they sat silently as Kerry criticized him. Even when Kerry called for a show of support for the troops overseas, the crowd was slow to applaud. In a local TV interview -- the only sort of interaction he has with reporters these days -- Kerry said he found the audience attentive and polite. "I know there were some people in there who didn't agree with me before I went in there, and therefore I'm even more respectful of that," he said.

But part of the problem is still Kerry himself. Even with prepared remarks running through a teleprompter in front of him, Kerry frequently strayed Thursday with what are becoming trademark tangents -- elaborations and explanations and qualifications that must strike him as important or interesting but which invariably distract from his central points.

Ruy Teixeira, a senior fellow at the Century Foundation and the Center for American Progress, said he hopes that there's an "inner simplifier" inside Kerry, just waiting to come out. But he acknowledges, as Kerry has, that simplicity really isn't in Kerry's nature. "He likes long lists, he sees many shades of gray, and he resists simplifying things," Teixeira told Salon this week. "It's a problem."

It's less of a problem now, when TV news producers can edit down Kerry's ramblings into relatively clear 10-second snippets, than it will be when the debates begin. Although the Bush campaign is dragging its feet on a debate schedule -- in part because the debates give Kerry a clear shot at Bush, and in part because fighting the debates helps lower the expectations when they come -- it's still likely that the candidates will meet in Miami on Sept. 30 for their first debate. If Kerry can't respond sharply to Bush's sometimes simplistic take on the truth, the ground he's making up now will be lost again.

Kerry should get some help from the new aides joining his campaign. McCurry, who was making his first trip with Kerry Thursday, said part of his job is to help the candidate focus his message. Kerry will get additional help on that front from John Sasso, who came over from the Democratic National Committee and who will, along with McCurry, travel with Kerry wherever he goes. They're not quite the Karl Rove-Karen Hughes team that Bush has -- the two advisors have controlled Bush's message since he ran for governor a decade ago, and they were at his side in Las Vegas this week -- but McCurry and Sasso should provide Kerry with some of the grown-up guidance and discipline that his traveling campaign has often lacked.

McCurry downplayed reports of a Kerry campaign in chaos, but he acknowledged that the infusion of new personnel will require some adjustments. "I have been in the middle of some totally screwed-up campaigns, and that's not what this is," he said. "They went through that period of defining who is going to do what in the general election, and they did that relatively late given that their convention was back in July. But my first cut of this, walking around, is that they've got a good sense of who's doing what, who's delivering what. Adding more people around the table takes a little bit of adjusting."

But for the moment -- and these moments tend to disappear quickly -- Democrats seem a little more confident that their candidate can get to where he needs to be, even if getting there means fighting on the national security turf where Bush seems the most comfortable.

"The same consultants who are so adept at losing presidential elections say you've got to get on your playing field and not talk about their issues," Will Marshall, founder of the centrist Progressive Policy Institute, told Salon this week. "We saw the brilliant effect of that policy in the 2002 midterm elections, when Democrats tried to change the subject from security and talk about domestic issues."

With Iraq spiraling out of control -- the National Intelligence Estimate brackets the outlook for the future between "tenuous stability" and "civil war" -- Marshall said that Kerry has an opening against Bush and an obligation to take it.

"It's foolish for the Democrats to cede security, and it's doubly foolish when George Bush is flailing so badly in his foreign policy management," he said. "It's not as though Bush is terribly effective on foreign policy, so why in the world would you want to cede it?"