"Sky Captain and the World of Tomorrow" 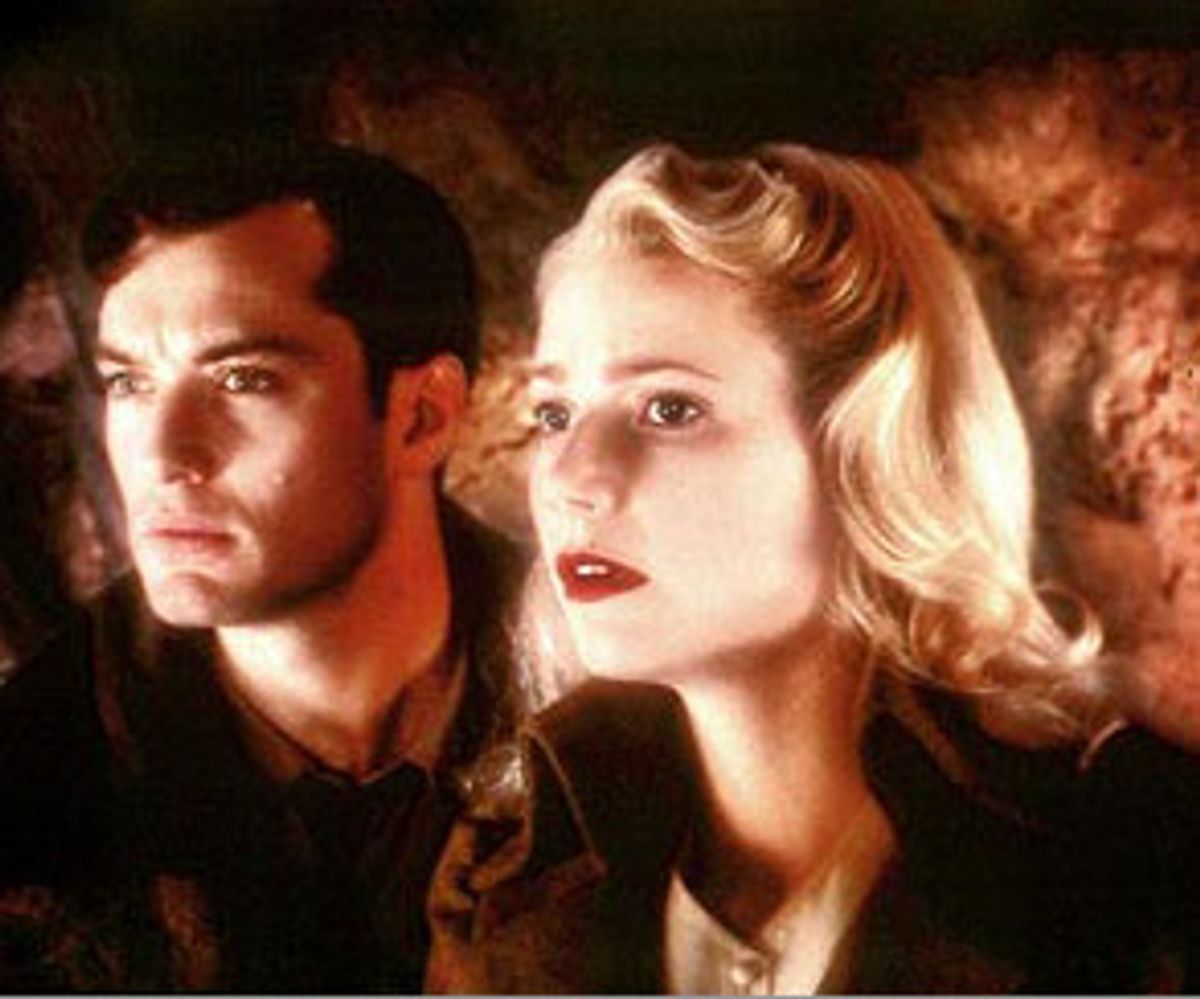 Kerry Conran's "Sky Captain and the World of Tomorrow" is so captivating to look at that you can almost forget there's virtually nothing to it. Set in a nostalgically futuristic fantasy version of New York, circa 1939, "Sky Captain" was filmed with live actors but no sets or locations. This means that its stars, Jude Law, Gwyneth Paltrow and Angelina Jolie, are very real, but the zeppelins, toylike fighter planes and giant Machine Age robots -- not to mention the dreamy Radio City Music Hall interior used in one scene -- are not, no matter how much we may want to believe in them.

Every detail was filled in lovingly, or at least obsessively, after the fact, by digital means. The result looks like nothing you've ever seen before, compiled very knowingly from many things you probably have: film noir, sci-fi pulp adventures from the '30s with garishly exhilarating covers, old Flash Gordon and Buck Rogers serials, and last, but not least, German Expressionist masterpieces like "Metropolis."

"Sky Captain" has a ravishing, pearly-soft surface luster: It reminded me of those hand-tinted photographs from the middle of last century, pictures of World War II-era sweethearts that began life as ordinary black-and-white snapshots and ended up lovingly embellished pocket masterpieces, their subjects transformed from ordinary wives and girlfriends into Venuses with rose-toned cheeks and dream-colored blouses.

Those photographs, to me, have always represented the ultimate in romantic idealization, and similarly, "Sky Captain" looks more like the object of someone's affection than anything so ordinary as a movie. Visually, it has been labored over so meticulously that the reality of what's underneath has been obscured. In other words, the script (written by Conran), the story and the acting -- not to mention the picture's kitschy, maddeningly clever tone -- all fold themselves into a defeatist heap once you dare to hold them up to scrutiny.

And believe me, I held scrutiny at bay for as long as I could. I loved the first 30 minutes or so of "Sky Captain," in which we meet plucky reporter Polly Perkins (Gwyneth Paltrow), who wears a charm bracelet with little P's and airplanes on it and whose hair falls down her back in glowing Varga-girl S-curves. (Her tresses look as if they've been lit from within.) Suddenly, New York City is besieged by massive art deco robots (they've flown in from God-knows-where in perfectly precise fighter-jet formation), who stomp through the streets, each footfall a menacing boom. Polly, bravely, snaps pictures of them. And when she finally does decide it's time to make a run for it, she lengthens the slit in her slimly tailored wool skirt by tearing the fabric fearlessly.

But as even the most sure-footed movie heroine sometime does, she falls down, directly in the robots' path, and we get a glimpse of them from a low-slung "camera" angle -- they're like radio-controlled monstrosities from some evil Brobdingnagian toybox.

Luckily, ace airman Capt. H. Joseph Sullivan (Jude Law), better known as Sky Captain, has been notified that his services are needed: He swoops down and saves the day, at least partially, and we learn that he and Polly have something of a history. They snap and crackle -- "I spent six months in a Manchurian slave camp because of you," Joe rails at Polly, referring to some previous instance of her overzealous reporting -- but you can tell that deep down, they love each other a bushel and a peck.

As Polly and Joe try to track down the mastermind behind the low-tech high-tech robot attack -- and the other, similar invasions that follow -- their adventures take them out of Manhattan and as far afield as Tibet and beyond. Eventually, they're shot right into space, although, of course, they do come back. Along the way, Polly meets the woman who has occasionally wiggle-waggled Joe's loyalty to her. And what a wiggle-waggler she is: Capt. Francesca "Franky" Cook (Angelina Jolie) is a crackerjack pilot who wears a silver eye patch as if it were a pasty.

But by the time Franky saunters onto the screen, the zillion-and-one retro references and the nonstop capital-F fun of "Sky Captain" may have begun to wear you out. The beginning of "Sky Captain" has a page-turning swiftness. Its early scenes seem to have been designed to suit a little boy's attention span circa 1939. First, we get some giant killer robots, then some giant winged flying things with sparks zapping off them, then a bunch of mechanical monsters with big tentacles, and so on -- there's some boring stuff in between, with a guy and girl talking, but it doesn't last long.

But the zinginess of the picture's first half-hour is deceptive. The movie is actually designed for a modern attention span -- the damned thing never lets up. By the time we get to one of the movie's centerpiece effects -- Laurence Olivier's reconstituted image, shimmering from beyond the grave, an instance of high-tech grave robbing -- we've been so relentlessly dazzled that we're ready to cry "uncle."

"Sky Captain" is so insistently impressive that nothing as organic as magic ever kicks in. I adored one of the movie's early images: an elephant who had been shrunk down small enough to lounge casually beneath a glass dome. But not long after that, the story began to meander, sometimes at breakneck speeds, which only made things worse. I kept looking to plug into the movie's sense of wonder, but I couldn't find the outlet. Everything, and everyone, looked so right.

Paltrow, in her sharp-shouldered suit, has the comic-strip reporter-heroine act down cold, to the point that it means nothing. Law, who always looks to me as if his limbs are connected by wooden pegs, at least has the correct era-specific aura about him -- he has the stiff elegance of a J.C. Leyendecker ad illustration -- but he's joyless to watch. Giovanni Ribisi, as Joe's comic-book-loving sidekick Dex, gives a real performance here. Unfortunately, he's absent for a huge chunk of the movie, having been kidnapped by those dang tentacled monster-thingies.

"Sky Captain and the World of Tomorrow" began as a six-minute short film made by Conran on his computer, and if nothing else, the look of the film speaks of an intense conviction. Conran believes in his movie so much that he almost wills us to believe in it, too. The critic sitting next to me grumbled about the style of "Sky Captain," claiming that it was just a manifestation of a fascist aesthetic, consisting, as it does, of lots of big, gleaming mechanical monsters and modern buildings juxtaposed against small scatterings of tiny, insignificant people. I think that's being too hard on Conran. As I see it, his aesthetic has been shaped more by stuff than by, say, Leni Riefenstahl. From what I can see, I suspect he's in love with puffy tin Buck Rogers ray guns, with softly colored souvenir postcards of the Chrysler Building and the 1939 World's Fair, with Bakelite rotary-dial telephones.

Considering I love all that stuff too, I can't say his heart is in the wrong place. But I eventually realized that I wanted to live in "Sky Captain," not watch it.

It's disappointing that "Sky Captain" reaches so high and so far, and ultimately seems more like a fancy mechanical toy than a work of art we can warm up to -- it's so calculated that it has none of the throwaway, cheapy vitality of the old '30s serials that inspired it. If it's at all possible, Conran may have cared about "Sky Captain" too much. It's a movie with all its fur loved off, and consequently, it gives off no love at all.