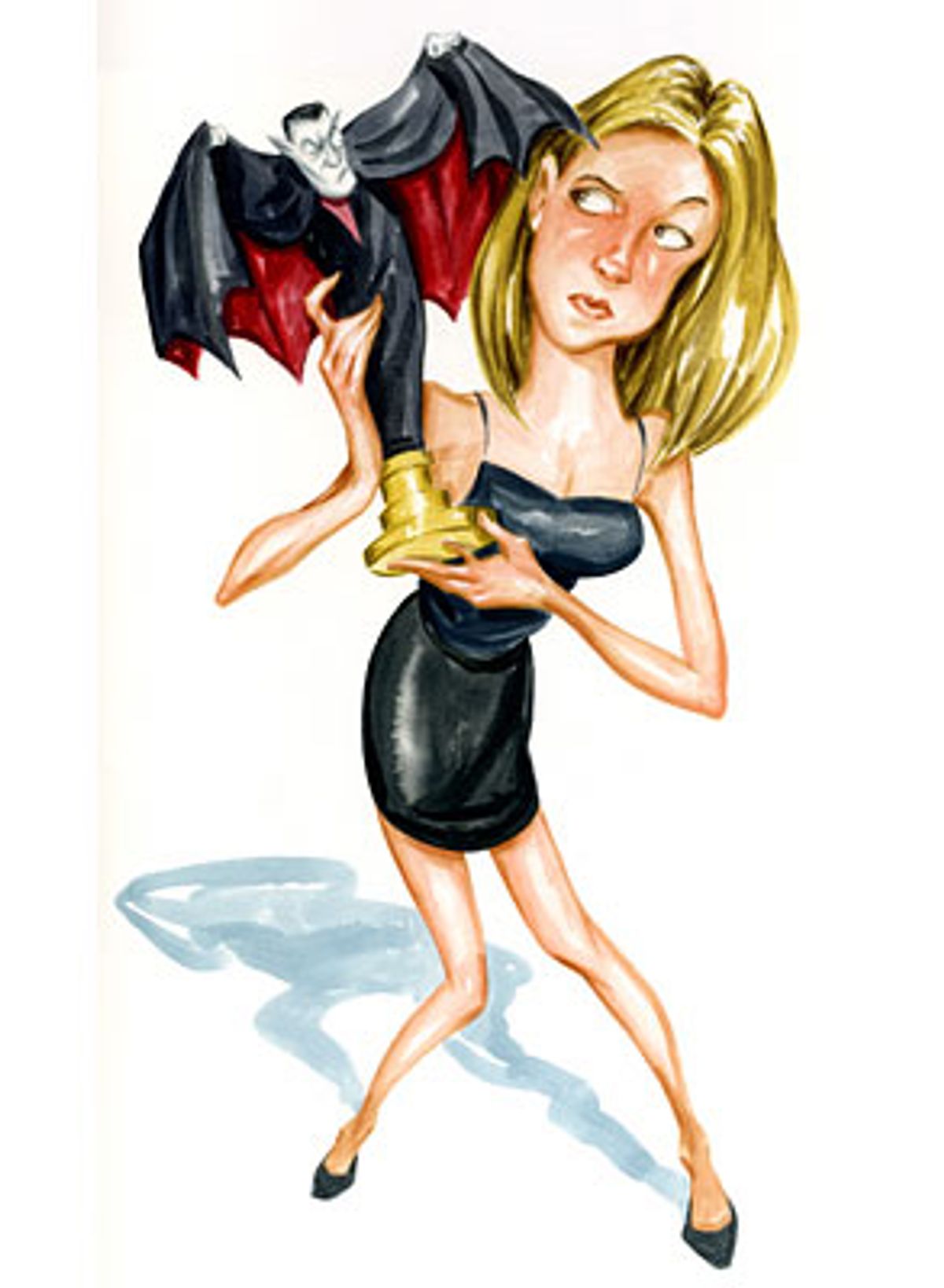 Why didn't "Buffy the Vampire Slayer," the show that launched more scholarship, analysis and reverent weekly gatherings than most organized religions, ever win an Emmy?

Hey, there, Scooby Gang. Put down those staffs! Yes, it's true that "Buffy the Vampire Slayer" won two Emmys. But should we really feel comforted by the fact that Joss Whedon's sly creation took home one Emmy for outstanding makeup for a series and another for outstanding music composition at a time when competent couch-idlers like "The Practice" and "Law & Order" went home with armloads of ghetto gold? The travesty. The travesty!

Of course, the standard answer for how "Buffy" and other shows -- "Gilmore Girls" and "Boomtown," to name a recent few -- can be both wildly admired and largely ignored by Emmy is mass popularity: "Buffy" never cracked the Nielsen Top 50, and if there's anything Hollywood admires more than an original story, it's a killer ad rate. That's why Emmy can continue to heap attention on such stale fare as "The West Wing" and "24" and ignore shows like BBC's "The Office," available only on BBC-America, usually located way down on your cable dial and frequently interrupted by ads for Chia pets and toothbrush disinfectants.

"Buffy," alas, is gone. But that doesn't mean that other shows won't be spared the attention they deserve -- and need, in order to build their audiences and ensure that they live to see another season. The Academy of Television Arts and Sciences should be patrolled like the Hellmouth that it is. And so, beginning this year, Salon will annually honor the show that has been most unjustly ignored by Emmy. The reward? The Buffy, a virtual token of our esteem, representing the courage to fight against crime-show clones and mindless action sequences, against extreme makeovers and Heather Locklear cameos.

Such trash is an insult to your intelligence. You're better than that. You're the proud owner of ... the Buffy!

So without further ado, Salon proudly announces that the 2004 Buffy goes to...

Not long after "The Wire" debuted in 2002, David Simon explained to Salon that he was interested in creating a show that didn't pander to an audience's expectations. "The pilot of ["The Wire"] is very much the anti-pilot. The one thing it doesn't have is that sense of, 'Are you gonna watch this show now? Are ya? Huh? Huh? Huh? If you don't come back we might kill this guy.' That's what you have to do on network, 'cause if they don't come back, you're cancelled."

That's the sort of pressure that a show like CBS's "CSI: Miami" feels when it promotes its Monday season premiere with flashing images of the cast and a warning that one of these characters will not survive! Despite suspiciously enthusiastic TV forums like this one, it's tough to believe that anyone cares very deeply about disposable characters on a skin-deep crime franchise.

In contrast, the deaths of characters like D'Angelo Barksdale and Frank Sobotka on "The Wire" (season premiere Sunday) felt like body blows to fans of the show, who'd become hooked on its simmering narrative and intricate plot lines. Still, it can be a difficult show. During the second season, when the story seemed to dwell on the inner conflicts of a longshoreman's union or followed the bumbling action of two green detectives who seemed so distant from the main story line, it was tough not to lose patience. Such meandering is utterly deliberate, according to Simon, who writes in "The Wire: Truth Be Told," a just-released companion guide to the show, "We would certainly lose some viewers: those who did not devote enough effort to follow the intricate story, those who gave it their all but were confused nonetheless, and those who, expecting an episodic television drama, would be bored to death by the novelistic pace of [the show]."

The patience and complexity of the storytelling might just be what distinguishes "The Wire" from any other show on TV. Entire episodes can feel like a setup to future plot points. Even the writers behind "The Sopranos," a show that never attempts to create contained little stories, throw in one or two moments per episode -- a great Meadow hissy fit, a memorable visit to Melfi -- that titillate and entertain while the major plots are slowly unfolding. This season, as Tony Blundetto dug himself a deep hole and Adriana slipped into denial about her fate, we were treated to hilarious squabbles between Meadow and her live-in boyfriend and nights on the town with the ever-moronic Anthony Jr. On "The Wire" there are no sops to viewers. Let's just admit it: Things can get a little slow. Like a very long, wordy novel, you need to pay close attention lest you miss something important. And you have to trust there's a payoff down the road -- because there is.

Take, for example, a moment from the first season when Det. Jimmy McNulty (Dominic West), and his partner Bunk Moreland (Wendell Pierce), examine a murder scene that may or may not be work of D'Angelo Barksdale (Larry Gillard Jr.), the morally conflicted nephew of a Baltimore drug lord. It's a clever scene, the cameras suggesting the geometry of the shooting, where the bullets came from, how the murder went down. Moreland notices white spots on the carpet, McNulty swings open a refrigerator door. They find a shell casing outside a window. The dialogue between the two consists almost purely of the repeated word "Fuck!" As the scene ends, they look like they've reached a conclusion of sorts -- and it's still unclear to the viewer what that conclusion might be.

That answer finally does come -- six episodes later, in the season finale, when McNulty and Moreland interrogate D'Angelo. Simon explains in "The Wire: Truth Be Told" that "when D'Angelo explains that he had brought cocaine to the woman, who told him she would put it 'on ice,' the detectives acknowledge the connection to their crime scene with a single word: 'Refrigerator,' says Bunk. And McNulty nods casually." To faithful viewers, the exchange prompted cheers and a deep sense of satisfaction. Can you image one of TV's franchise crime shows, with its strict 44-minute formula, stretching the denouement over seven weeks?

Part of what makes the "The Wire" so convincing is Simon's passion. A Baltimore journalist who left the profession in disgust over the toothless nature of most newspapers, Simon still talks like an old-fashioned muckraker, and the stories he tells have the zing of a good exposé. The first season, which focused on McNulty's obsession with a far-reaching drug-running Baltimore crime family headed by the mysterious Avon Barksdale, was not a crime show to Simon. Instead, it was "a dry deliberate argument against the American drug prohibition -- a Thirty Years' War that is among the most singular and profound failures to be found in the nation's domestic history." The second season, which eventually found McNulty and crew probing a foreign crime syndicate operating out of the Baltimore port, was really "a treatise about the death of work and the betrayal of the American working class, as exemplified by the decline of a city's port unions." One thing's for certain, this guy Simon is angry. Maybe that's why his show crackles with such fierce conviction.

"The Wire" may be populated by a killer cast of unknowns and scripted by a writing crew (including Richard Price and George Pelecanos) that will appear legendary years from now, but Simon doesn't hold back in giving credit to HBO, which, free from the demands of commercial TV, doesn't place the same sort of demands on him ("How [would] I help my sponsors sell sports utility vehicles and prewashed jeans to all the best demographics while at the same time harping on the fact that the American war on drugs has mutated into a brutal war against the underclass?"), the sort of demands he felt as a writer on "Homicide," after NBC executives had read a script ("Where are the victories?" "Where are the life-affirming moments?").

There's nothing obviously life-affirming about "The Wire." The two characters who grappled with morality and tentatively tried to do what was right met vicious ends. We're never quite sure whether McNulty, the show's glue, really cares about justice or just about being right. We're just as likely to cheer for the iconic Omar, a stickup artist bent on brutal revenge against the Barksdale clan, which he blames for killing his gay lover. It's a swirling moral universe these characters exist in, and it can be a disorienting one. But at a time when most television (entertainment and news) seems programmed to provide quick titillation and social reassurance, "The Wire's" insistence on seeking out truths and raising important questions is more welcome than ever before.