Paul Bettany and Kirsten Dunst prove they're real pros in this film about a mediocre tennis player who finds his confidence ... and his love match. 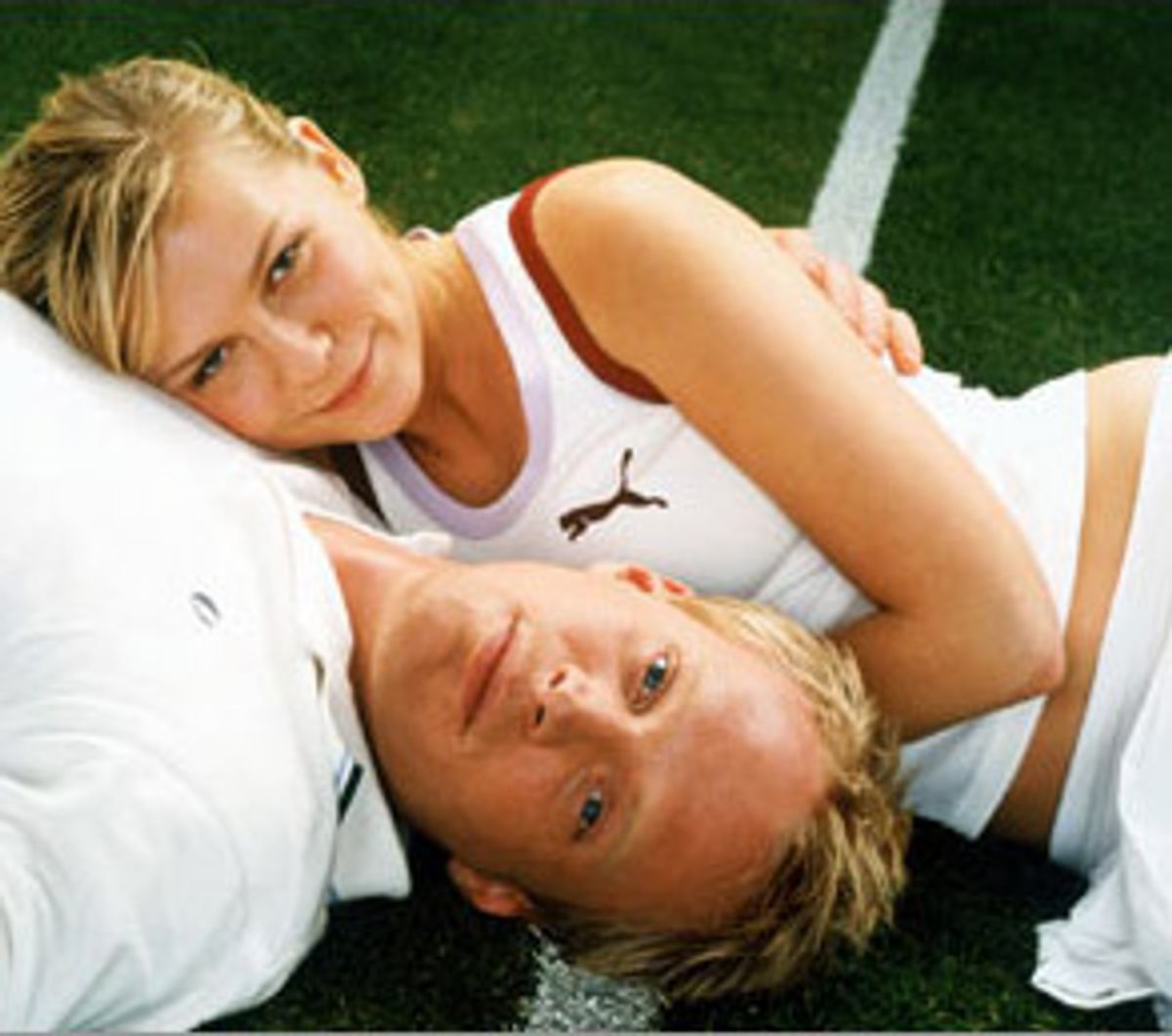 In "Wimbledon," as a professional tennis player whose self-assurance is shot after years spent on the bottom rungs of the professional rankings, Paul Bettany uses his character's crisis of confidence to deliver a smashingly assured performance. The 33-year-old Bettany gives a young man's version of an old pro's suavity. He's drily witty, fabulously sexy, and he's learned the trick of holding back enough to make you want more.

Peter is in his 30s and has been heading to Wimbledon for 13 years -- at this point, more as a matter of form than anything else. He never advances very far into the rankings, and as the movie opens, he has decided to trade in his competitive career after this year's tournament for a stint as the pro at a posh tennis club in the London suburbs.

"Wimbledon," which was written by Adam Brooks and the team of Jennifer Flackett and Mark Levin, is about what happens when Peter regains some of his confidence and begins advancing toward the finals. A big part of the boost to his confidence is his affair with Lizzie Bradbury (Kirsten Dunst), an American player who's unapolagetically aggressive on the court but who wilts under the scrutiny of her coach-father (Sam Neill, bringing a light touch to a potentially overbearing role).

From the opening credits, where the titles appear to the thwock-thwock tick-tock of a tennis ball being hit back and forth, director Richard Loncraine keeps "Wimbledon" moving at a pleasingly swift place. The movie doesn't wait for Peter and Lizzie to fall in love before it lets them fall into bed (the beginning of their affair is presented as part of Lizzie's matter-of-factness).

Loncraine doesn't linger on potential groaners, like the trio of horny middle-aged women ogling Peter at the tennis club, and he gives just enough screen time to characters who could grow tiresome, like the snotty young American player (Austin Nichols) trying to bed Lizzie, or Peter's missing-in-action agent (Jon Favreau) who turns up when his client becomes hot again. Favreau gives the character just the right amount of sports-agent-galoot avarice, but the most welcome sight among the supporting cast is Eleanor Bron, as Peter's mother, who sails through the movie with the assurance of someone who's utterly content with who she is.

Loncraine's sense of pacing comes through best in the tennis scenes, where he's aided by Humphrey Dixon's sharp editing. Watching Peter advance through one round after another might have quickly grown repetitive. Loncraine and Dixon know just where to put the focus -- which is on Peter. There are moments here where Bettany is held in close-up, and the only sounds we hear are his interior monologue, which put us inside an athlete's head better than any movie since Robert Towne's "Personal Best."

As for the play itself, the movie whizzes through the matches, often just showing one essential point, or jumping ahead to the aftermath, telling us the outcome and moving on. Loncraine doesn't spend much time on any one match until the finale, and then he achieves genuine suspense. The cinematographer, Darius Khondji, shoots the tennis scenes in ways that put you close to the action, keeping it fluid and clear. There's none of the static feeling you get from watching the unmoving overhead shot of a match on television.

London hasn't been given the glamorous treatment in the movies much in recent years. Khondji gives the city its due. A sequence where Peter and Lizzie walk around London at night, and another where they take off for an impromptu seaside idyll, zipping along in Peter's MG convertible, has some of the cocktail-shaker sparkle you recall from the way movies depicted London in the '60s.

Perhaps "Wimbledon" was considered not slam-bang enough to be a summer release. Coming a week before the season ends, its sunny warm-weather look is a teasing reminder of the days about to slip away. That look is a big part of what makes "Wimbledon" such a slick, satisfying entertainment, as is the chemistry of Dunst and Bettany.

In "Spider-Man 2" Dunst seemed to be chafing against her role for no discernible reason; it was a grating performance. "Wimbledon" gives that spikiness an outlet. Dunst instinctively understands the comedy within the idea that someone as dimpled and sweet-looking as she is turns out to be an aggressive, unfazed-by-anything smartass. Dunst, flattening out her voice to achieve a tone of deadpan sarcasm, delivers little zingers with lemonade sunniness.

Dunst and Bettany turn the movie into a barbed love match between American wisecracking and British dry wit. She keeps tossing lines to Bettany to see if he can parry them, and to her delight, and ours, he does. The tension adds to the sexiness of their matchup. That tension goes pffft in the final shots, which have the feel of a studio-imposed add-on from the '40s. It's not enough to ruin the movie, though.

It was only a few years back that the movie model for English sexiness was Hugh Grant's floppy-haired stammering routine. Fortunately, for him and for us, Grant discovered he's a lot sexier and more appealing as a bastard ("Bridget Jones's Diary") or at least as a bit of a bastard ("About a Boy").

Paul Bettany's performance suggests that an English actor need no longer neuter himself to be a sexy romantic lead. There's one throwaway exchange in "Wimbledon" that may be the key to the performance. "Everybody loves a winner," says Peter's friend and workout partner (the charming Nikolaj Coster-Waldau), to which Peter replies, "Everybody but the British."

Part of the pressure that builds on Peter comes from the fact that no Englishman has won Wimbledon since Fred Perry in 1936. Several times in the movie Peter is tempted by how easy it would be just to give up, to stop playing through the pain, and to settle into the long-honored tradition of British failure.

We want to see Peter win, of course. The movie gets comic mileage out of the superstitions of athletes. But what cuts deeper is that Bettany doesn't filter out the fear or weariness from Peter's hunger to win. It's a recognizable, attractively human approach, and because Bettany plays Peter's moments of doubt with such casual aplomb, he's never in danger of appearing dithering or weedy. Movingly and without any sentimentality, Bettany gets at the profound sense of tiredness that can affect a still relatively young man when failure and disappointment start to eat away at his confidence.

"Wimbledon" is a sleek trifle, but Bettany gives it some weight. He shows us how hard Peter works to get where he does, and does it with wonderful ease. This is a star-making performance and, as with the character he plays, success looks good on Bettany.