The giant retailer's introduction of RFID technology is forcing other supermarket chains to catch up. But fiddling with data may not be the best survival strategy in the Wal-Mart future. 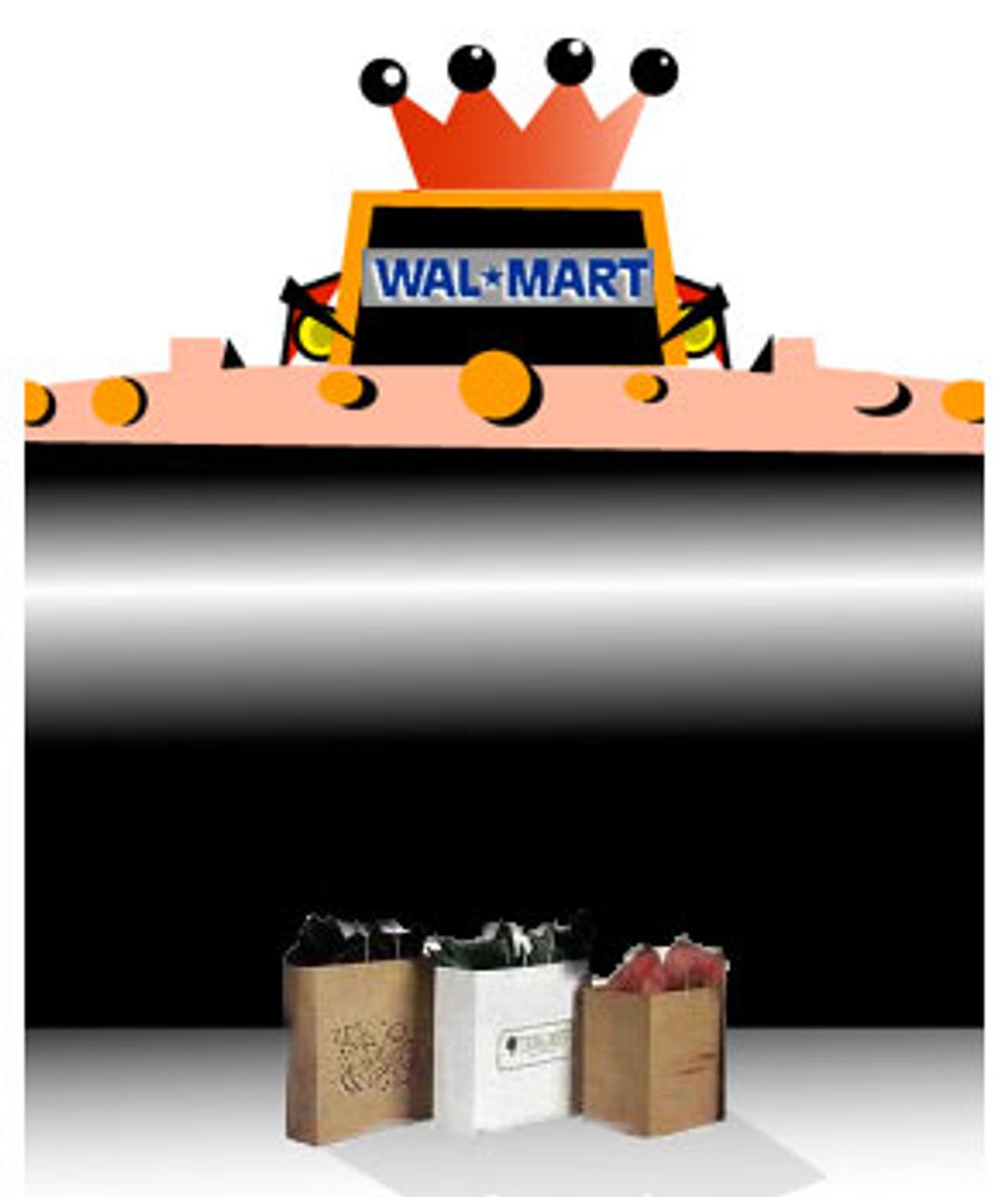 What do you call it when a company announces a multibillion-dollar technology initiative with no preexisting infrastructure, no software code and an 18-month deadline to delivery?

In most cases you'd call it a recipe for disaster. In the case of Wal-Mart, a company with the power to force others to follow its technology agenda, you'd simply call it "tough love."

That two-word description, according to a January article in Computerworld Magazine, is exactly how Wal-Mart CEO H. Lee Scott summed up his company's philosophy on radio frequency identification (RFID) in a speech to suppliers last winter. For those who missed it, the company sent out letters to top suppliers last June requesting that all pallets and boxes come equipped with RFID tags by Jan. 1, 2005, a request designed to facilitate better warehouse tracking. Suppliers so far seem to have gotten the message. This June, a year after the initial letter campaign requesting 100 participants, Wal-Mart reported that 137 companies had climbed aboard.

"We see this as beneficial to the entire supply chain," says Procter & Gamble spokesperson Jeannie Tharrington, summarizing her company's eager participation in the so-called "mandate." "Right now our out-of-stock levels are higher than we'd like and certainly higher than the consumer would like, and we think this technology can help us to keep the products on the shelf more often."

Such comments, of course, reinforce a growing theme in the business and technology press: Those worried about Wal-Mart's deleterious effect on mom and pop retailers need to put down Nirvana's "Nevermind" album and catch up on present-day reality. Nowadays, even billion-dollar behemoths face the awkward choice of doing things the Wal-Mart way or watching a major portion of their customer base wave goodbye.

Not surprisingly, most are choosing to set their strategic clocks to Arkansas time. This summer, just before Wal-Mart launched a pilot RFID rollout in a handful of Texas stores, the Worldwide Retail Exchange, an industry consortium launched by supermarkets and other large retailers to improve back-end efficiencies, announced that it, too, had seen a dramatic increase in members willing to participate in its "global data synchronization" effort. The effort's focus is to make sure that the code a supplier uses to describe a consumer product in its own databases matches the code in retailer databases, a simple concept in theory but a fiendishly complex task in reality. The reason: Most retailers and suppliers rely on proprietary software code and standards to define current bar code data. Adopt a common standard, says WWRE's chief marketing officer Nick Parnaby, and a package of toilet paper or can of tuna suddenly becomes trackable across all portions of the so-called "supply chain" -- factory, truck, retail shelf and checkout line.

Wal-Mart's decision to unilaterally impose RFID on its suppliers made making the case for "global data synchronization" to the rest of the industry a done deal, whether or not they understood what they were doing.

"[Before RFID] you couldn't describe it to your chief executive in less that 25 words," says Parnaby. "With RFID, you suddenly have people's attention."

Granted, investment levels in technology among supermarkets, a retail sector that has given up 21 percent of its North American market share to Wal-Mart over the last two decades, remain modest. Of the 20 companies that have participated in the data synchronization program, Parnaby estimates the average investment to be $250,000 per company. Still, he sees it as an ante on what has become an increasingly high stakes poker table. It's a sign that volume-dependent chains like Krogers, Albertson's and Safeway are willing to gamble on Wal-Mart's ability to make RFID an industry-wide product tracking standard.

"Wal-Mart has created this herd moving in the right direction," Parnaby says.

But is it really the right direction for anyone besides Wal-Mart? Some industry observers suggest that supermarket chains that are attempting to survive in a Wal-Mart world may find that no matter how many technological "efficiencies" they introduce, they will never be able to challenge Wal-Mart in the area where it remains supreme -- price. If they really want to differentiate themselves, they may have to look elsewhere. Instead of searching their databases for answers, they might just have to ask a simple question:

Joshua Greenbaum, principal at Enterprise Applications Consulting, has counseled clients to hang back a bit when it comes to game-changing strategies like RFID and data synchronization. After all, he says, it was only five years ago that most supermarket chains were still racing to catch up with electronic data interchange, or EDI, a 1980s-era data-sharing standard designed to reduce the vast amount of paperwork supermarkets generated with each product order.

"Wal-Mart has proven that under intense margin pressure, a little I.T. [information technology] can go a long way," says Greenbaum, noting the company's mid-1990s decision to move past the EDI standard. "On the flip side, the mechanics and physics that go into making RFID work are still a long way off. With RFID, there's still something in the hookah that smells a little funny."

Such comments echo concerns within the supermarket industry. Known for its punishing margins -- according to the Food Marketing Institute, the average supermarket earned 95 cents for every $100 spent inside its doors -- the industry can afford little in the way of technology experimentation. That Wal-Mart has proved itself more aggressive in this arena owes more to size than boldness. Last year, Wal-Mart stores generated $256 billion in sales, $67 billion if you count only the food, candies and tobacco products. That's more than Krogers ($54 billion), Albertson's ($35 billion) and Safeway ($35 billion).

In other words, assuming a similar 1 percent technology reinvestment rate, Wal-Mart could match each of its three grocery competitors dollar for dollar and still have another dollar left over for pilot programs like RFID. Never mind the additional savings from nonunion labor and having the best bulk-buying leverage in the business.

"When we're talking about Wal-Mart, the best that other retailers are going to be able to compete with Wal-Mart is to do what Wal-Mart can't do," says Lee Hollman, vice president of product development for Nashville-based IHL Consulting Group, a company that tracks I.T. spending within the retail industry. "Wal-Mart will beat everybody on price, beat 'em like a drum."

Surprisingly, few companies take that advice. Asked for an example, Hollman skips over the top tier of companies and points to Publix, a fast-growing Florida supermarket chain that earned $661 million on $16.8 billion in sales, an eye-popping 3.9 percent margin. How did the company do it? By focusing on store-specific services like on-site bakeries and baggers who walk the groceries out to customers' cars.

To pay for the extra labor, the company charges higher prices than its discount competitors, of course. Then again, the company has also foregone the now-standard "loyalty card" programs that impose hidden software licensing and database grooming costs on the back end.

"I have to get my biases up front, however," says Hollman. "Both my wife and I do our shopping at Publix."

The reason, says Hollman, boils down to service. Because the customers who prefer lower prices to better service already have the option of driving to Wal-Mart and Costco in most corners of the U.S. southeast, the company can instead focus on the minority of shoppers willing to pay a few cents more to have their groceries walked out to the car. When the company does make a decision to invest in technology, such investments generally focus on portions of the business visible to the customer, such as a recent 16,000-unit order for Hewlett-Packard checkout terminals.

"They do customer stuff really well," Hollman says. "They understand that going head-to-head with Wal-Mart is probably not in anybody's best interest."

Loyalty card programs, like RFID, have been a favorite target of consumer groups concerned about retailer use of customer-specific information. A more damning complaint, however, comes from Gary Hawkins, president of Green Hills Market, a single store operation in Syracuse, N.Y.: Most companies have yet to see anything close to the expected profits such systems originally promised.

"The big guys deal directly with the [consumer products group] companies," says Hawkins, noting his neighboring competitors. "My experience has been that the large retail companies collect data more for the benefit of suppliers or to make sure suppliers' discounts only go to the best customers. I would venture to say, I don't think that's the best strategy."

In contrast, Hawkins says, his own company's loyalty card program, run with the help of a Windows PC system and an SQL database, is devoted more to identifying the best customers and making sure those customers get additional benefits beyond low prices. Each Thanksgiving, Green Hills' top spenders receive a free turkey, and each Christmas they get a free tree. Additional incentives throughout the year are designed to keep the profitable customers coming back while at the same time encouraging unprofitable customers to find another place to ferret out bargains. Like Publix, the company is willing to trade higher volume for higher income.

Not every store manager or president has the luxury of knowing his best customers by name and face. Still, Hawkins says, customer service is as much a matter of philosophy as strategy. Executives who see Wal-Mart as a paragon of retail are, in essence, espousing the philosophy that companies can squeeze more profits out of internal operations than they can draw out of customers at the checkout aisle.

"If you sit back and look at the whole supply chain, the consumer is not in that supply chain," says Hawkins. "The products on that flier are not there because that customer is interested in those products. Those products are there because the manufacturer has paid for them to be there. What the customer wants doesn't enter into the equation. In my mind that's a bit backwards."

At the same time, however, Greenbaum has noted the paradox of Wal-Mart capitalism: That in order for it to succeed, a company practically has to give itself over to Soviet-style principles. Whether that means management centralization, tighter information control, or adopting a "tough love" approach to suppliers and employees, most large-scale corporations are too far down the garden path to consider a detour.

"This is command capitalism," Greenbaum says. "It almost has to be. We're talking about the tightest, most dreadful business to be in: All your capital is sitting on the shelf going out of date. Your competition is 100 times bigger than you'll ever be and can sell products at retail cheaper than you can buy them at wholesale. We're talking about a business that's heavily unionized and where one of the biggest unions is the Teamsters. It doesn't get much more grim than that."