The Saudis just say no to Bush

The desert kingdom's elite say a second term would be "catastrophic." 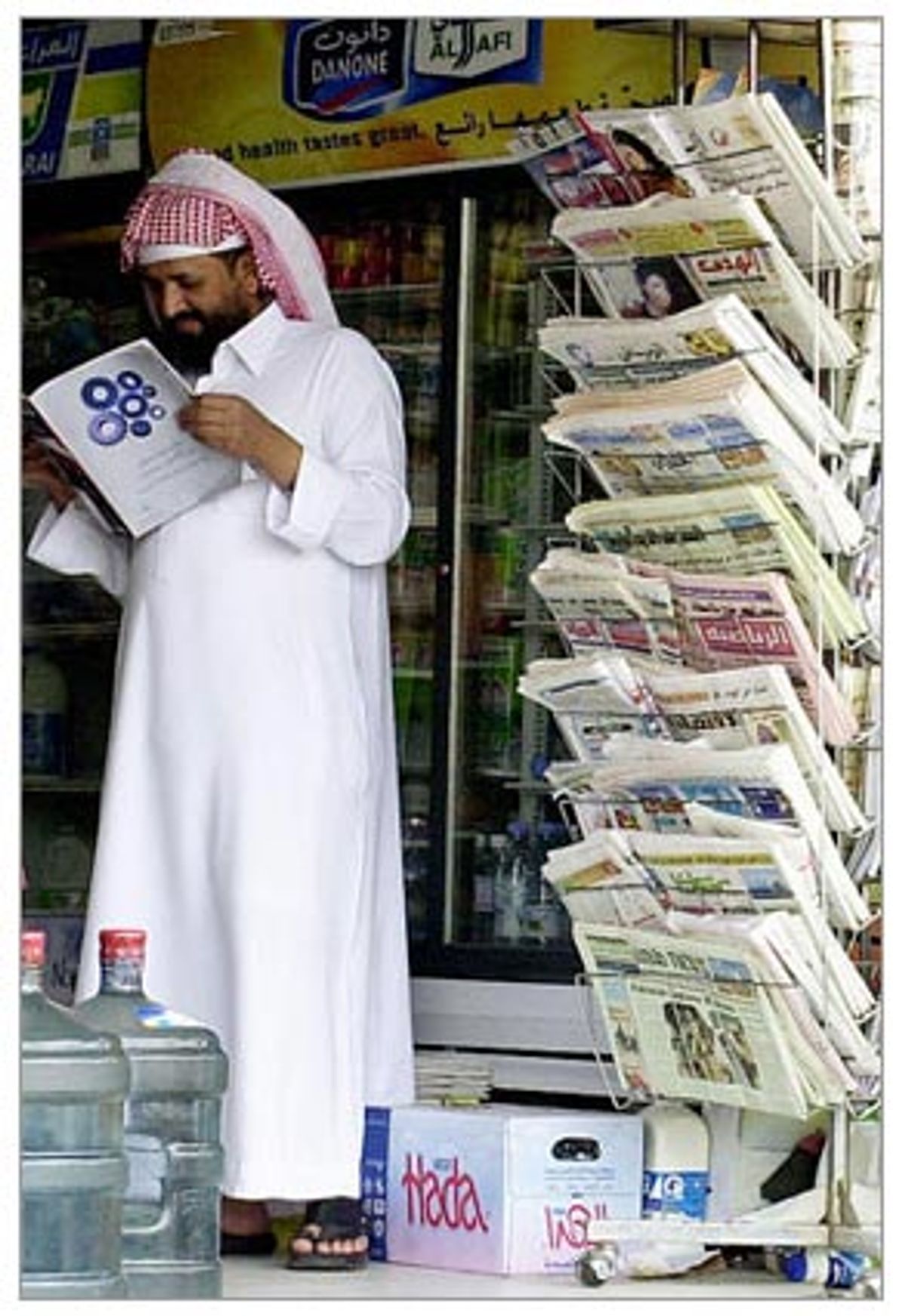 Once staunch allies and supporters of President Bush, many influential Saudi Arabians -- whose nation the president's father, George H.W. Bush, protected from Saddam Hussein during the 1990-91 Gulf War -- view the prospect of Bush's reelection as "catastrophic." Indeed, on a trip to the desert kingdom earlier this month, I was hard-pressed to find anyone, at any level of society, in Saudi Arabia who speaks positively of President Bush, or looks favorably on the prospect of another four years of the Bush administration in the White House.

Many fear that a Bush victory in November would only mean more turmoil and violence in the Middle East. They point to the "failed policies" of the Bush administration as cause for their concern: the apparent descent into civil war in Iraq, the stalemate in the Palestinian-Israeli dispute (and the administration's pro-Israeli tilt), the alienation of the Arab and Islamic world, and the rising tension from U.S. accusations about Iran and Syria concerning their nuclear weapons programs and support of terrorism. Saudis also worry about a suggestion by U.S. neoconservatives inside the Bush administration calling for the breakup of the Saudi kingdom into two or three smaller states.

At a traditional "diwaniye," a men-only dinner, in Riyadh in early September, I sat down with some 25 Saudi businessmen to discuss the American presidential election. They seemed far more interested in the U.S. elections than in their own -- also scheduled for November -- despite the fact that theirs are being held for the first time in more than 30 years. Saudis are to elect half of the 178 municipal councils, the rest of which will continue to be appointed by the king.

The men at this gathering are not fundamentalists but the elite, politically influential segment of Saudi society -- CEOs of information technology companies, owners of big businesses, and doctors -- the movers and shakers. From their stylish corner offices in Riyadh's high rises, they tap away on computers connected to the world via broadband, keeping tabs on the price of Arabian light, Brent crude and breaking news. They drive elegant cars, fire off e-mails using fancy PDAs and close business deals worth billions of dollars. They are at ease discussing world affairs with visiting Western reporters -- chatting about Bush's poll numbers, the war in Iraq, security in the kingdom and other issues on which they keep abreast and are ready to offer their opinions.

The majority of these men studied at American universities. They remember their college days in Houston, Los Angeles or San Francisco with fondness. But the "bad effects the Bush administration is having on the Arab world," they say, are rapidly eroding their pleasant memories. "We all obtained our degrees in the United States; we felt at home there," one prominent Saudi said. "But now, the way they are treating Arabs in general and Saudis in particular, we are sending our children to British, Canadian and other colleges. In the long run it is America that will suffer," he said.

"Everything is good about America except its politics," said another Saudi man, to nods of approval from the group. When informed that Bush was leading Democratic contender John Kerry by as much as 11 percent in one poll, one of the dinner guests lamented that a Bush victory would be "catastrophic." Several of his friends nodded in agreement. They said they have a hard time understanding Bush's decision to go to war in Iraq.

Of course, before the war Saudi Arabia was hardly a friend of Saddam Hussein, whom Saudis saw as a serious threat to their security. It was George H.W. Bush who protected Saudi Arabia from a possible invasion in 1990-91, after Saddam invaded and occupied neighboring Kuwait. Many analysts believed at the time that Saddam would have kept going and taken the Saudi oil fields were it not for the presence of the U.S. troops hastily dispatched to the kingdom. So while Saudis are still highly critical of the current President Bush, they speak warmly of the United States. "I have not met anyone who has been to the United States and not liked it," one of the dinner guests said.

In other parts of the Arab and Islamic world, those who may likewise appreciate America and Americans share these Saudis' contempt for Bush. A poll conducted in Egypt -- another staunch U.S. ally and the recipient of tens of billions of U.S. dollars in financial aid -- on the eve of the third anniversary of the Sept. 11 attacks found Osama bin Laden ahead of President Bush in popularity. A poll in Saudi Arabia showed that if it were to hold free elections with bin Laden as a contender, he would win by a clear margin. (In some Arab and Islamic countries, of course, anti-Bush sentiment is encouraged by the government to distract people from internal problems.)

Most members of the Saudi elite I encountered believe that the war in Iraq was a diversion from an important concentration on al-Qaida and bin Laden. Three years after 19 terrorists, most Saudi nationals, slammed passenger jets into the World Trade Center and the Pentagon, shocking America and the world, the war to eradicate terrorism is far from being won, they say. Al-Qaida and its affiliates remain operational -- carrying out attacks across the globe, from Jakarta, Indonesia, to Riyadh -- despite being routed from their Afghan stronghold and the killing or capture of a number of key operatives.

Now Saudi Arabia's long-standing close relationship with the United States, cemented over the years in part by the American education of the Saudi elite, is likely to shift to other countries. Already, the kingdom has started selling more of its oil to China, and it may no longer be among the top five largest suppliers of oil to the United States, according to James Placke, a senior associate at Cambridge Energy Research Associates and a former U.S. deputy assistant secretary of state for Near Eastern affairs. He says that the once "special relationship" between Saudi Arabia and the United States is weakening; it began to decline, Placke says, when the Bush administration prepared for war with Iraq. He notes that Saudi oil exports to the United States dropped from 1.7 million barrels per day in 2002 to 1.1 million bpd in May. The invasion of Iraq, says Placke, "was clearly not in tune with [the interests of] Saudi Arabia or really anyone else in the Arab world." Now, he says, there is "a slow recognition by the Saudi side that the 'special relationship' isn't so special anymore."

What's more, many of the Saudis I spoke to believe that Bush's plan to instill democracy overnight in the Middle East is wildly unrealistic. As Ihsan Ali Bu-Hulaiga, a member of Saudi Arabia's consultative council, the Majlis al-Ahura, said, "Before you can install democracy, you need to have democrats." For the moment those are hard to find in most parts of the Middle East.

In his campaign appearances, President Bush tells Americans that the world is now safer because of his war in Iraq. But much of the rest of the world, including the Middle East, begs to differ. Summing up his countrymen's sentiment, one Saudi said: "Bush has caused more harm to America's image than can be imagined."

Claude Salhani is an international editor and political analyst with United Press International.