Gold bodysuits, giant inflatable phalluses and an orangutan mascot for gay divorce. With a new book and movie, the Yes Men prepare to take their activist performance art to a whole new level. 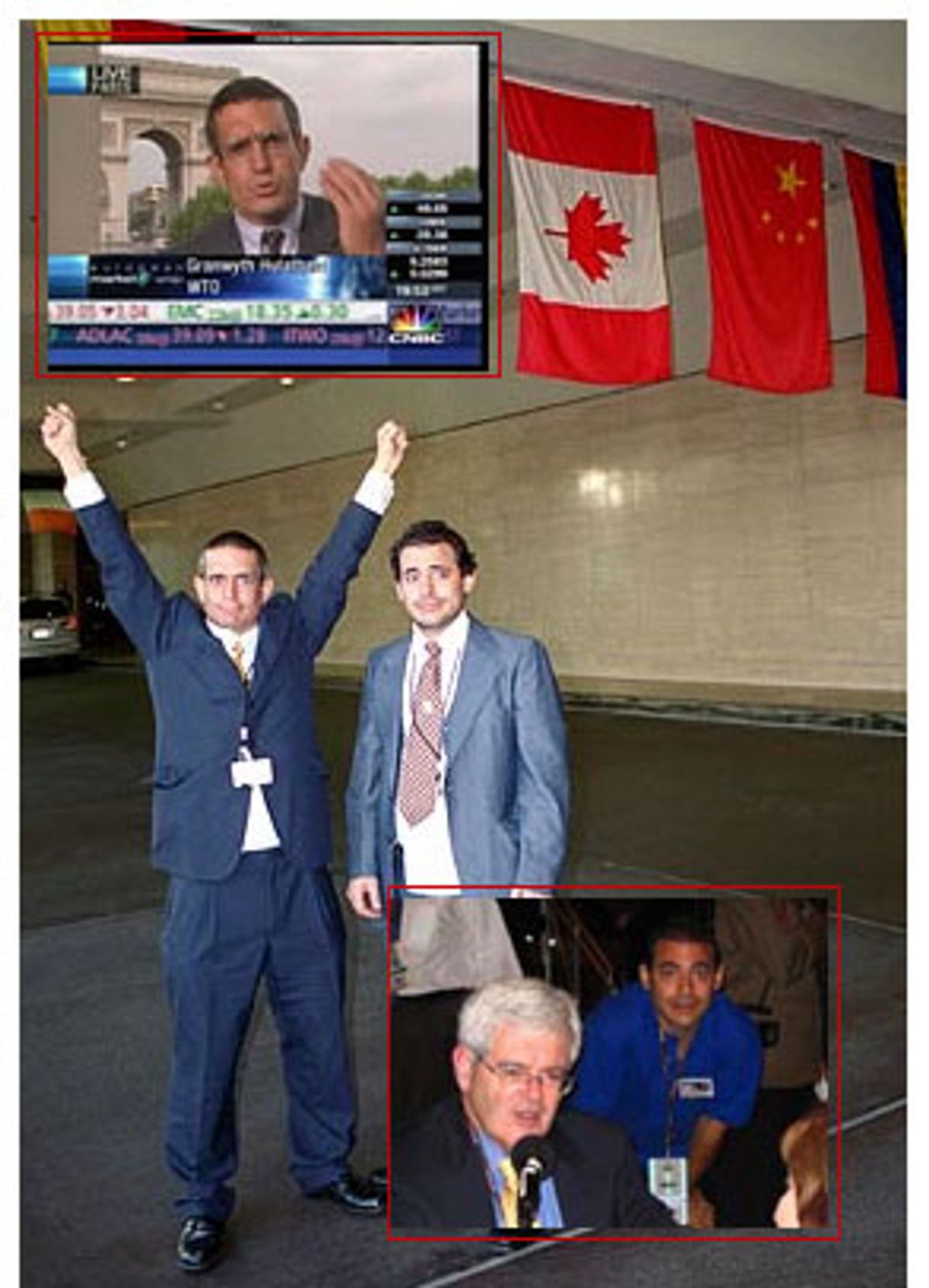 The four male figures standing in the moonlit yard of a Los Angeles hillside house are plotting strategy. And central to it is the 6-foot-tall tree, with bug eyes and a black ministerial hat, standing in front of them.

"That's Smokey the Log, our mascot," explains Mike Bonanno. He and his partner, Andy Bichlbaum, together known as the political prank team the Yes Men, plan to use Smokey the Log in their latest act of activism/performance art. Smokey, it seems, will be deployed during the group's bus tour of presidential swing states to persuade voters to sign petitions stating that they are supporting President Bush's forestry policies and are "promoting global warming," Bichlbaum says.

The Yes Men are sort of like "Jackass" for the MoveOn set, except they set the artistic bar a bit higher. "'Theater' is basically the closest word we could use to describe what we do," Bonanno says, adding emphatically: "It's protest, it's theater, it's performance art. It's identity correction."

Their pranks are reaching a broader audience this week with the release of their book and documentary film (opening Friday in New York and Los Angeles), both called "The Yes Men." Impersonating Republicans and members of the World Trade Organization, they have attended conferences and spoken on television, expressing what they believe to be the unfiltered and uncensored agendas of their nemeses. And -- to further aggravate their NEA-bashing foes -- they've received grants to pursue their passion: a Guggenheim new-media grant, a California Institute of the Arts Alpert grant for film and video, and an experimental/new genres grant from Creative Capital Foundation in New York.

"When it comes down to it, we like to think that we're telling the truth," Bonanno says. "If anyone took us to court they would be doing their own identity a disservice."

"The Yes Men" chronicles Bichlbaum and Bonnano's prankish "Identity Correction" projects as they impersonate their initial target, the World Trade Organization, online, on television and at business conferences around the world. In the film's climax they make it all the way to Tempere, Finland, for a business conference on textiles where Bichlbaum transforms himself into "Hank Hardy Unruh, WTO representative."

Amid a roomful of a dozen or so unassuming attendees, he gives a lecture explaining that the problem with slavery in the United States was not an ethical one, but its lack of cost-efficiency. The stunned audience is speechless until Unruh's assistant (Bonanno) helps him further the presentation by yanking off his breakaway business attire to reveal a skintight gold lamé jumpsuit. The conference-goers gasp.

"This is the management leisure suit," Unruh proudly proclaims. With another tug at his groin, a large phallus with a mock television screen at its tip inflates from his waist. This schoolboy's accidental nightmare is the intentional climax to the Yes Men's political theater of the absurd. Unruh paces around, gold protrusion bouncing with each step as an instructional video shows how the businesses of the future will monitor workers through the strange TV penis he's demonstrating. The baffled audience applauds, and as seems to usually be the case, "nobody gets it," Bichlbaum says, resigned.

New York natives Bichlbaum, 40, and Bonanno, 36, met eight years ago and immediately hit it off. The two had both taught university courses in new media, and "we were both politically active in our different ways," Bichlbaum says. "People we knew introduced us to each other because we had done similar projects."

Their first Yes Men foray was conceived serendipitously in 1999 while they were working at the anti-corporate Web site ®™ark. They received an e-mail from someone who had registered the domain name www.gwbush.com asking them to create a site spoofing Bush's election platform. Bichlbaum and Bonanno got to work. They graphically fashioned it after the real Bush campaign site (www.georgewbush.com), sans flowery political rhetoric. Instead, they unabashedly offered the platform: "To help the rich at the expense of the poor and the environment."

At a press conference shortly after the mock site went live, a reporter asked the then-presidential hopeful to comment on it. An outraged Bush exclaimed, "There ought to be limits to freedom."

After that, Bichlbaum and Bonanno obtained the domain www.gatt.org ("GATT" being the abbreviation for General Agreement on Tariffs and Trade). They set it up to look like a World Trade Organization site, complete with a contact e-mail. When they started receiving invitations to appear at global business conferences and on television by people who wished to reach the WTO, they decided to launch their breed of live-action political theater.

"We kept upping the ante," says Bichlbaum. And so WTO characters like Hank Hardy Unruh and Granwyth Hulatberi were born.

During a July 2001 appearance on CNBC's "European Market Wrap," Hulatberi appeared to discuss the upcoming protests against the G8 meeting in Genoa, Italy. Among his suggestions: a market for human rights violations, so that countries that want to abuse their citizens can buy "justice vouchers" from those who don't. The show's host took it in stride, but fellow guest Barry Coates, from the activist World Development Movement, was livid.

More people were introduced to the Yes Men via their recent high-profile escapades at the Republican National Convention in New York City, which earned them the title of "prankster invaders" in the New York Times. Doesn't this mainstream media coverage put them in danger of being recognized? "Our target audience, swing voters, doesn't read the New York Times," Bichlbaum says.

He and Bonanno crashed the convention in Madison Square Garden disguised as Republicans. "People gave us their press credentials," Bonanno admits. Once inside, they passed out more than 1,000 fliers asking folks to "Take the U.S. Patriot Pledge" and volunteer to have a permanent nuclear waste storage facility in their communities. And they made friends. Bichlbaum ingratiated himself to Energy Secretary Spencer Abraham, getting his photo taken with him. "He was probably the only rabid fan that Spencer Abraham had ever seen," Bonanno jokes. Bichlbaum pipes in: "Mike got a photo of himself crouching behind Newt Gingrich!"

If the unique photographs weren't enough to earn them a red shooting star on eBay, the Yes Men snagged another invaluable souvenir that would certainly be sought after: the 210-page script from that day's RNC speeches. Found on the floor next to a garbage can, the teleplay included Arnold Schwarzenegger's prime-time speech. "It had scripted pauses, as well as spontaneous eruptions from the audience," Bichlbaum notes. "We also saved a list of delegates' names and addresses. We can use it as a mailing list for something," Bonanno adds impishly.

The Yes Men don't have specific plans on how they will use this material, but they know that other opportunities for more political pranks will come up (all of which will be chronicled on the Yes Men's Web site).

What sets the Yes Men apart from other political pranksters is the elaborateness of their disguises. They conduct interviews and online research and can create a mean PowerPoint presentation on short notice. An experienced special effects designer, Sal Salamone (who recently contributed his work to the hit musical "The Producers"), creates the elaborate costumes, like the Studio 54 homage to indentured servitude that Bichlbaum wore in Finland and the majestic Smokey the Log suit -- two weeks in the making.

Salamone is also debuting another Yes Men "character," a sort of party gorilla for the James Brown fan who votes -- an orange orangutan sporting funky sunglasses and a suit made of (you guessed it) gold lamé. The satirical simian and the lovable log are part of the traveling "Yes, Bush Can" tour.

As they make their way through the swing states in a large white van, campaigning heavily through Nov. 2, the Yes Men will ask potential voters such loaded questions as: "Will you sign a petition supporting Bush's tax cuts for the elite?" "Orren," their orange orangutan, will serve as the Bush administration's environmental policies mascot. Orren made a test run just last week in San Francisco's Castro District as the Diversity Compassion Orangutan, there to support gay divorce on behalf of the Bush-Cheney campaign. (Specifically, he was promoting a preemptive annulment program for potential gay marriages, fully explained in this leaflet.)

Of course, this derision toward the president, his party and their politics is par for the course in this epoch of rebellious pop-culture politics. Controversial filmmaker Michael Moore -- who makes a cameo appearance in "The Yes Men" -- is chief among its patrons. Bichlbaum and Bonanno are slowly gaining a following from the underground up for their unique brand of highly organized but absurd comedic protest.

The Yes Men are in good (albeit odd) company among anti-administration groups like Guerrilla News Network (online uncensored hard news from the underground) and "F**k the Vote" (a satirical campaign to trade sex for votes against Bush). "Bush has been a real good leader of the activist community," Bichlbaum says.

Yet, despite all the Bush-bashing, Bichlbaum says that not much will change for the Yes Men if the Oval Office occupant changes. "If Kerry wins, it's not going to be over," he says. "This momentum is going to have to carry us past November." He believes that when people see the type of political protest that the Yes Men and others do, they will become "addicted to it, because it's so fun."