Too much about memos, too little about war

As the election nears, will TV news finally get tough and really cover the Iraq war? 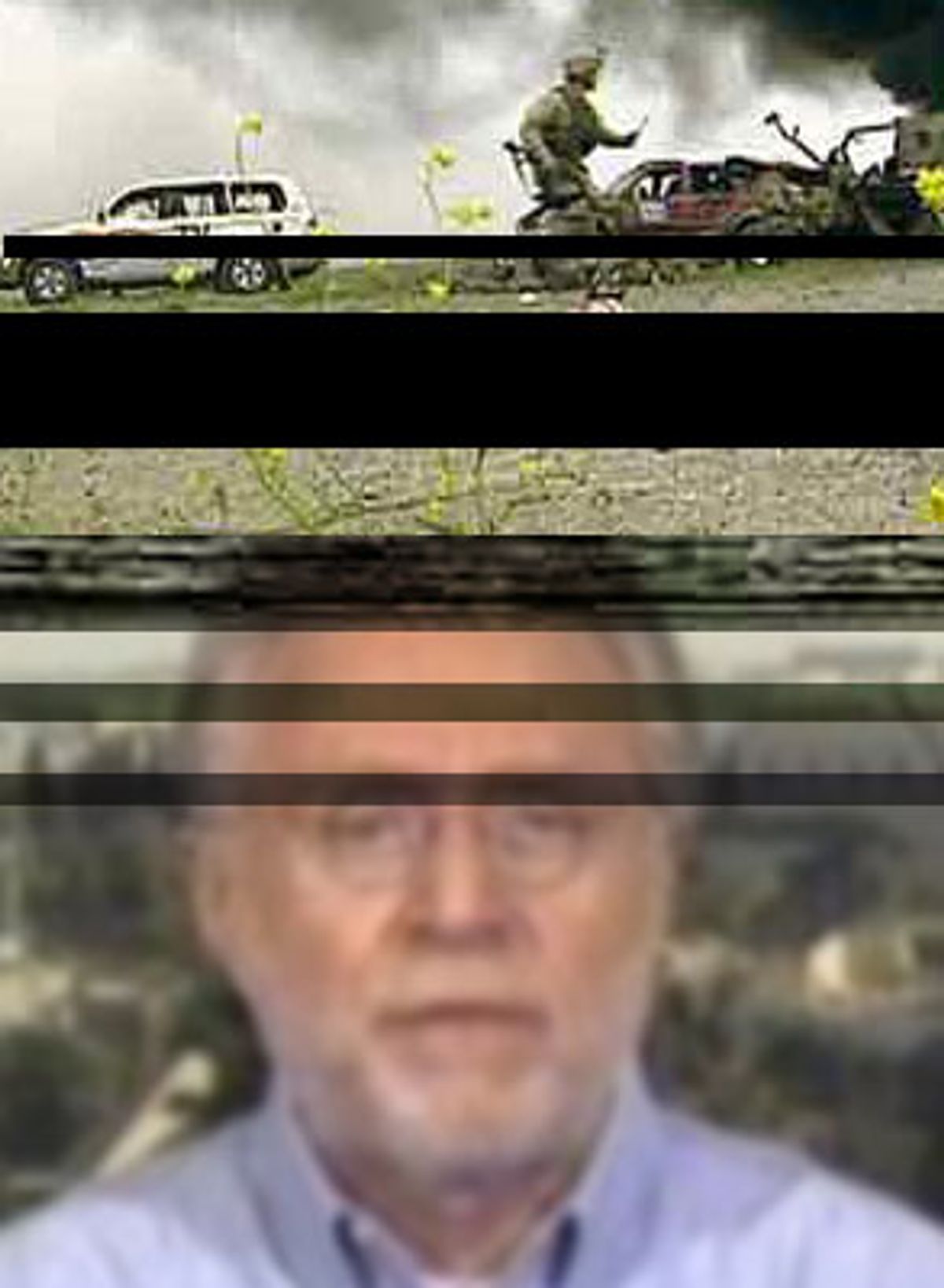 With the war in Iraq emerging this week as perhaps the defining issue of the presidential campaign, news reports from the region take on added significance, helping voters sort out their feelings about the war. It's too soon to know how the all-news channels and television networks will play the Iraq story between now and the election, whether they'll show some skepticism toward positive White House forecasts about the situation in Iraq or revert to perfunctory dispatches, dutifully noting the latest roadside bombings, found in so much of their coverage over the summer. But for now at least, as more questions arise about Iraq's future, there are signs of a new, more realistic brand of reporting.

CNN's Wolf Blitzer this week described Iraq as a "daily bloodbath," while the on-screen graphic for a segment during CNN's "NewsNight With Aaron Brown" on Wednesday read: "The Wreck That's Iraq." Networks are also doing more fact checking. On ABC's "World News Tonight," Peter Jennings highlighted a statement by the president in which Bush said that John Kerry had proclaimed "the world was better off with Saddam in power," and said, "I strongly disagree." ABC then played a clip of what Kerry had actually said: "Saddam Hussein was a brutal dictator who deserves his own special place in hell. But that was not ... in and of itself, a reason to go to war." (But when White House communications director Dan Bartlett made the same baseless charge about Kerry's view of Saddam during an interview this week with CNN's Judy Woodruff, she responded rather meekly, "I don't know if that's exactly what he said.")

Last week's bloodletting in Iraq, which killed hundreds -- combined with a new CIA analysis that refused to rule out the eruption of a civil war in Iraq, Bush's high-profile address to the United Nations, and Sen. John Kerry's daily Iraq-related attacks on the Bush administration -- has brought the issue back to television's center stage. "They're beginning to show a little more [about Iraq]," says Yvonne Haddad, a professor of the history of Islam at Georgetown University.

According to a search of TVEyes, the database of television news, for each consecutive week this month, Iraq garnered increasing mentions on all-news cable channels and the three major networks. For instance, on MSNBC during the week of Sept. 5-11, Iraq was referenced 464 times. The next week the number grew to 542 mentions. And as of Thursday morning, this week's Iraq tally was already up to 774.

With more press attention to Iraq comes more public attention. According to a September poll conducted by the Pew Research Center for People and the Press, 47 percent of Americans are paying close attention to news about Iraq, compared with 39 percent in August, among the lowest levels of the past year. And there is a clear connection between how closely Americans pay attention to Iraq and Bush's standing in the polls; the less attention people pay to Iraq, the better Bush does.

Critics of the media, though, insist that despite any recent strides, TV news outlets have a long way to go to provide truly thorough coverage of Iraq. "Print people are doing a better job of explaining what's going on," says Dow Smith, associate professor of broadcast journalism at Syracuse University. "Networks haven't done that kind of explaining piece. They've relied too much on, 'Today a suicide bomber killed this many Iraqis.' The networks' mentality of a 30-minute newscast doesn't fit the situation in Iraq. You'd think the 24-hour cable channels would be filling that role, but they haven't stepped up, either. I watch the cable channels and fume. None of them are doing a good job with perspective and background on Iraq."

Part of the shortcomings in coverage stems from the physical strains of trying to report from inside Iraq, where journalists no longer feel safe going out among the local population and instead confine themselves to the relatively secure hotels, where TV correspondents tape their satellite feeds. As the Washington Post's Rajiv Chandrasekaran told readers during an online chat Wednesday, "The roads are too dangerous, the threat of kidnapping too great. We spend a lot of time sitting in our hotels and relying on the reporting of our very brave Iraqi local staff. It's not great for us and it's not great for our readers, but it's the best we can do under the circumstances."

At the same time, U.S. news outlets remain reluctant to pick up footage shot by Arab-run outlets such as Al-Arabiya and Al-Jazeera, which often capture more graphic and timely footage. Consequently, when comparing Arab and U.S. television newscasts, "a totally divergent story about Iraq comes out," says Asad Abukhalil, professor of political science at California State University at Stanislaus. (The last time Arab footage received wide exposure in the United States was when an Al-Arabiya correspondent was killed on the air after being hit by U.S. rocket fire last week.)

Another factor limiting U.S. coverage is that television news organizations, after amassing enormous resources for the invasion of Iraq, cut back too quickly, not anticipating an extended aftermath that proved deadlier than the major combat. "I don't think networks are represented well enough in Iraq, numerically or qualitatively," says Robert Zelnick, chairman of the journalism department at Boston University and a former Pentagon correspondent for ABC News. "So they're reduced to doing reports from the rooftop of their hotel, which is not adequate."

Broadcast journalism's continued gradual awakening to Iraq might put an end to the odd inverse relationship that developed over the summer between the amount of Iraq news and the number of U.S. casualties: As more and more U.S. troops were killed, there seemed to be less and less TV news coverage. In June, 42 U.S. soldiers were killed; in July, 54; in August, 66. September's tally is projected to be around 75, making it the third-deadliest month since the occupation of Iraq began more than a year ago.

And if that trend continues, it would mean approximately 90 U.S. fatalities in October, for a total of nearly 1,300 dead coalition soldiers by the time of the November election. (The tally is closer to 1,500 if private U.S. contractors are included.) Yet despite the clear increase in violence and in U.S. and Iraqi casualties, TV outlets continued to treat the situation in Iraq with a strange detachment. For instance, the morning of Sept. 5 brought news that seven Marines had been killed by a suicide car bomber Monday as they patrolled the outskirts of Fallujah, marking one of the deadliest attacks of the entire summer. The New York Times posted a dispatch on its Web site at 8:05 a.m. Yet at 10 a.m. during their top-of-the-hour news reports, CNN, Fox News and MSNBC made just cursory mention of the mass killings. The channels were entrenched in hurricane mode, covering Frances nearly nonstop for the fourth straight day.

The same was true on Sept. 14, when a car bomb killed at least 50 people in Baghdad. That attack came just two days after a different insurgent strike had killed approximately 80. But on Sept. 14, Fox News waited until 10 minutes after the top of the 11 a.m. newscast to even refer to the fresh Baghdad carnage.

"Fatigue does set in among readers, reporters and editors," notes Judith Matloff, a professor of journalism at Columbia University who covered conflicts around the world for the Christian Science Monitor. "The bar inevitably rises for people to get upset about certain types of violence. [You] have to have an outrageous incident to wake people up again. Readers and editors think, We've heard this before." Marcy McGinnis, senior vice president of news at CBS, disagrees, saying, "There is no fatigue."

Yet even with its interest in Iraq piqued, television still seems to have its heart in other stories. For the period between Sept. 15 and Sept. 22, when extraordinary violence was erupting in Iraq on a daily basis and Americans were being kidnapped and beheaded, "Iraq" was discussed on the three all-news cable channels just about as often as was "CBS," which found itself at the center of a media controversy involving disputed memos from President Bush's former commander in the Texas Air National Guard. Iraq was mentioned 1,125 times on Fox News while CBS was mentioned 1,031 times, according to TVEyes. At MSNBC Iraq got 918 mentions, and CBS 929, while at CNN the difference was much greater -- 1,069 references to Iraq, and 364 to CBS. (It's interesting that at CNN Europe, Iraq was mentioned 1,022 times during this time period, nearly as often as on CNN's U.S. broadcast, even though most of the coalition fighting -- and dying -- is being done by U.S. troops.)

And if it wasn't the CBS memos nudging Iraq aside, it was hurricanes. From Sept. 1 through Sept. 22, all three cable news outlets, as well as all three major networks, spent far more time covering the storms pounding Florida than the battles being waged inside Iraq. MSNBC showed the widest disparity: 2,940 mentions of hurricanes and 1,826 references to Iraq so far this month. By September's end, at the current pace of combat deaths, slightly more Americans will have died from the hurricanes during the month than from fighting in Iraq.

"During the Republican Convention, what did everybody cover? The convention," says Charles Peña, director of defense policy studies at the Cato Institute and an analyst for MSNBC. "Same with the Olympics. News organizations pay close attention to events for a finite period of time, knowing that once it's gone, it's gone. Subliminally, they may be thinking, Well, Iraq's not going anywhere."

Smith of Syracuse notes that the BBC has been broadcasting stories about Iraq that are being missed by its American counterparts. "For instance, two Sunni clerics were murdered over the weekend. I didn't see that anywhere on TV, but that was BBC's lead story on Monday," he says. Smith would have had to watch pretty closely to catch any mention of the clerics' killing. According to TVEyes, between Sept. 19 and 21 the three cable channels made just 15 references to the murder of the two prominent clerics. By contrast, during the same time span, CNN, Fox and MSNBC combined made 52 references to Britney Spears.

Sometimes, the cable channels just don't seem to want to focus on the negative. Over a three-day period this week, when there was shocking news that two more Americans had been beheaded by terrorists while the killers' cameras rolled, CNN, MSNBC and Fox combined had just 221 mentions of the beheadings while they made 1,636 mentions of the CBS memo controversy.

"It's almost as if the media fears the public thinking of them as being too negative if they go with too much war coverage," says Peña. "Enough of the media doesn't want to cross some imaginary line where they're going to be accused of politicizing the news and going after the administration."

While U.S. television coverage of Iraq has gotten a bit more aggressive this month, it still doesn't accurately reflect the situation there, says Georgetown's Haddad: "Everybody I know in Iraq is saying it's worse than you can possibly think."