When Bush and Kerry finally face off Sept. 30, which version of Iraq will the public buy? 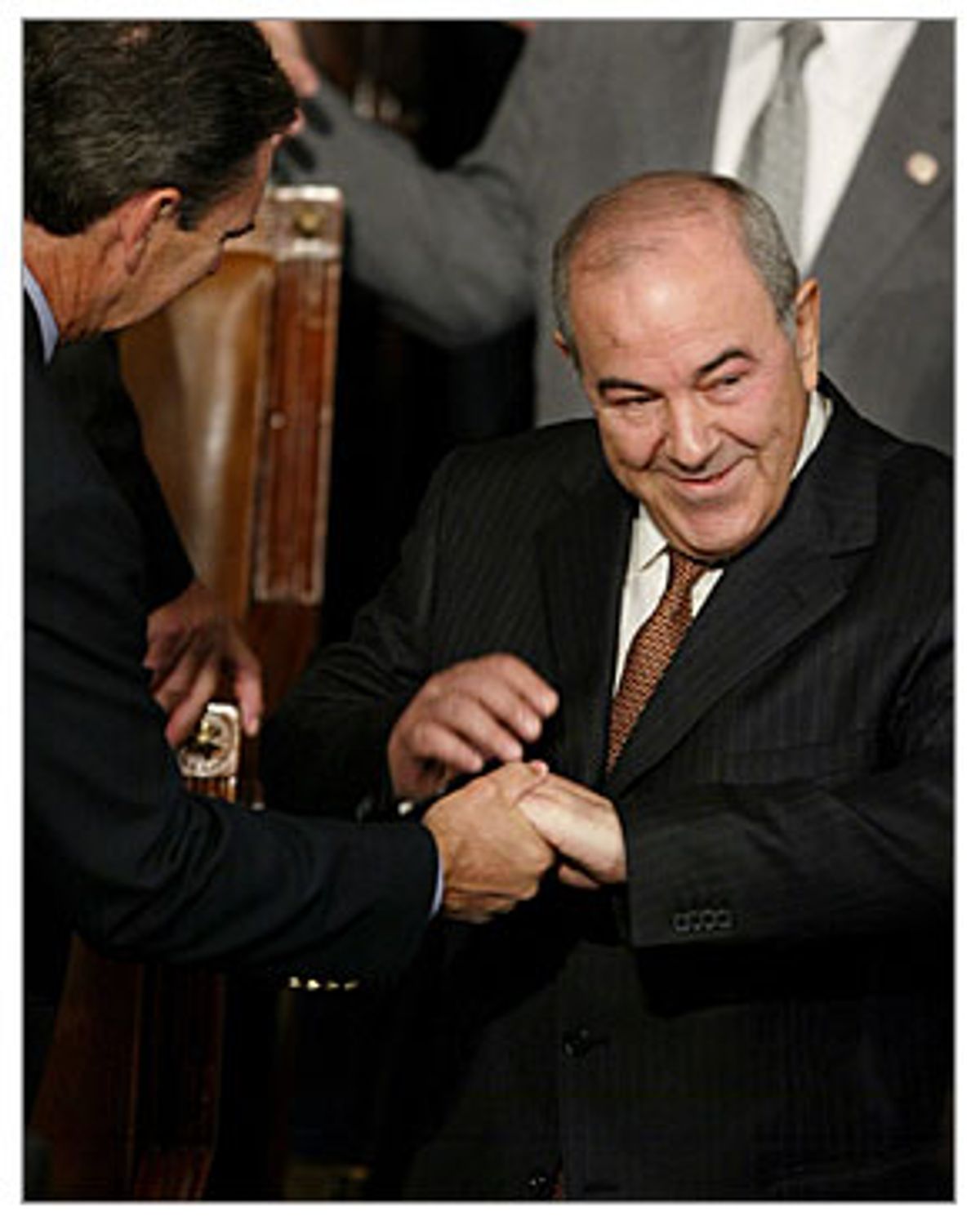 Ayad Allawi, the interim Iraqi prime minister, stuck to the Bush administration's talking points in Washington this week. In media interviews, he insisted that U.S. troop levels in his violence-wracked country are just fine and that if Saddam Hussein were still in power, "terrorists [would] be hitting there again at Washington and New York." In an address to Congress, the onetime CIA operative -- using language that appeared to be lifted from a Bush campaign speech -- spoke of the "determination of the Iraqi people to embrace democracy, peace and freedom." Handpicked by the Bush administration and rubber-stamped by the United Nations after its choice was rejected by the United States, Allawi stood smiling in the Rose Garden next to President Bush as he called critics of his Iraq policy weak-kneed pessimists.

For Rep. Ellen Tauscher, D-Calif., these scenes were surreal. The House Armed Services Committee member returned on Monday from Iraq, where American civilians are being kidnapped and beheaded, Iraqis are dying in suicide bombings and U.S. forces are being driven from much of the Sunni triangle. In Baghdad, the first thing she noticed was the raw sewage flowing through the streets. "Children were playing in puddles that you know are basically human excrement," she told Salon in a telephone interview Friday. "Clearly, we had a fundamental misunderstanding of what it takes to win the hearts and minds of Iraqis."

Tauscher added: "There's been a major effort by both the administration and the administration's advocates, which include Allawi, to put a happy face on the situation. They are trying to accent the positive as opposed to being realistic."

Instead of stumping on the economy and domestic issues, as he had planned for the election homestretch, over the past week John Kerry has relentlessly attacked Bush's invasion and handling of postwar Iraq as dangerously wrong and incompetent. The president struck back Friday, accusing Kerry of undermining Allawi with his criticism. In the battleground state of Wisconsin, Bush told supporters: "You can't lead this country if your ally in Iraq feels like you questioned his credibility."

On Capitol Hill on Thursday, Defense Secretary Donald Rumsfeld testified before the Senate Armed Services Committee and said that, if Iraq is too insecure to hold national elections in January, "well, so be it." Not every Iraqi needed to vote, he said. "Nothing's perfect in life."

Tauscher found Rumsfeld's insouciant attitude about the elections disturbing. "You can't have San Francisco and Chicago and Dallas not vote in a national election and have anybody believe it is a credible election," she said. But without a major military operation to return control of insurgent-held cities in the Sunni triangle to the central government, Iraq will not be able to claim that it held a free and credible vote, Tauscher said. "I'm not criticizing the prime minister for being an optimist, or even for being in lockstep with the administration, who did, after all, appoint him. But expectations have got to be recast. There is a major counteroffensive that we have to launch in Fallujah, and I expect it will come after the elections. That means casualties will mount at Thanksgiving and Christmastime, and the American people aren't expecting this."

But the election comes first. Will voters respond to Kerry's gritty realism? Or will they prefer Bush's sunny optimism? What role will reality play? With Bush claiming that criticism of his Iraq policies shows disrespect for U.S. troops, the facts can easily be lost in a festival of patriotism. The danger, as Senate Foreign Relations Committee member Chuck Hagel, R-Neb., recently put it, is that Americans will become deluded with "some grand illusion that we're winning."

Sheba Crocker, co-director of the Post-Conflict Reconstruction Project at the Center for Strategic and International Studies in Washington, said the think tank's reports on Iraq indicate "a fairly negative picture at this point, and I think strongly belies the idea that it's only anecdotal evidence that goes against these more positive public pronouncements."

CSIS has gathered data from American, international and Iraqi sources and conducted nearly 700 interviews with ordinary Iraqis, using Iraqis as researchers to enable speaking with people whom the security situation would prevent foreigners from reaching. The study found that Iraqis are happy that Saddam is gone, but they also want Americans to depart, and they express uncertainty about Iraq's ability to govern itself. The violence, lack of electricity and water, and absence of healthcare and employment opportunities have degraded their quality of life.

"There is a disconnect between the very positive public pronouncements that we are hearing and the reality on the ground," Crocker said. "It's maybe understandable because of the politics of it. But to be faced with beheadings, daily bombings and vastly increased attacks against U.S. forces, and the establishment of these 'no-go areas,' and to then say it's only dire pessimists raising questions seems to deny the reality."

Gen. John Abizaid, commander of the U.S. Central Command, told Congress this week that while he could use international and Iraqi forces to bolster his 135,000-person operation in Iraq, he didn't think the United States itself would need to send more troops.

But Sen. Jack Reed, D-R.I., one of the administration's most vocal critics, challenged that notion during the Senate Armed Services Committee hearing at which Rumsfeld spoke. Reed read from a new report by a Pentagon-appointed panel, the Defense Science Board, which identified "a lack of long-term endurance" in the military. Troops are stretched so thin, the report found, that if Iran, North Korea or some other hot spot flares up, the United States would be hard-pressed to respond. Rumsfeld shrugged off the report, telling the committee that better management, such as using civilians to do tasks now performed by uniformed personnel, would free more troops for combat.

In an interview with Salon, Reed called that approach "legitimate," but pointed out that the Defense Department "has been trying to do that for a couple of years," and yet "the experts who have been looking at this have come to the conclusion that we [still] need more troops."

Asked about reports that Fiji is considering contributing troops in Iraq, Reed diplomatically praised the South Pacific island nation, saying, "We certainly appreciate the contributions of any country around the globe." But they are of little help, he added, if troops "are not capable of doing particular missions and of supporting themselves logistically. And, I mean, how many troops is Fiji really going to bring?"

Another gaping hole in the Bush line about Iraq exposed this week is the notion that 100,000 Iraqi security forces have been trained to fight alongside Americans. In fact, only about 4,700 of those new forces so far are trained for military action, as opposed to police work or other less intense security tasks, Reed told Salon.

What's more, the few forces that Americans have been able to train and equip are not always reliable. In an interview on NBC Thursday, Tom Brokaw told Allawi that the network had recently sent a correspondent and crew to Samarra, where they encountered Iraqi troops working with anti-American insurgents -- helping them smash radios the U.S. military had distributed in the hopes that the local people would tune into American-sponsored radio programming. Allawi breezily replied: "Now the situation has changed."

Rep. Tauscher understands why Iraqi troops' loyalties are divided: "It's like if Tennessee were to declare war on Arkansas. I don't think we, as Americans, could imagine the Tennessee National Guard running into Arkansas to fight the Arkansas National Guard," she said. The American-trained Iraqi troops are being asked to fight people who "all look like they do, are from their tribe, or live down the street. It's an unnatural act."

Seeking to defend his version of the Iraq war this past week, the president dismissed the CIA's dire National Intelligence Estimate of Iraq's future as a "guess," delivered a defiant speech before the United Nations, welcomed the cooperative Allawi and dispatched his political surrogates to attack Kerry as aiding and abetting terrorism. But next week, during the first debate, he and Kerry will finally clash face to face.