I loved her as my own. But when her father and I split up, and I was forbidden to see her, I paid the price. 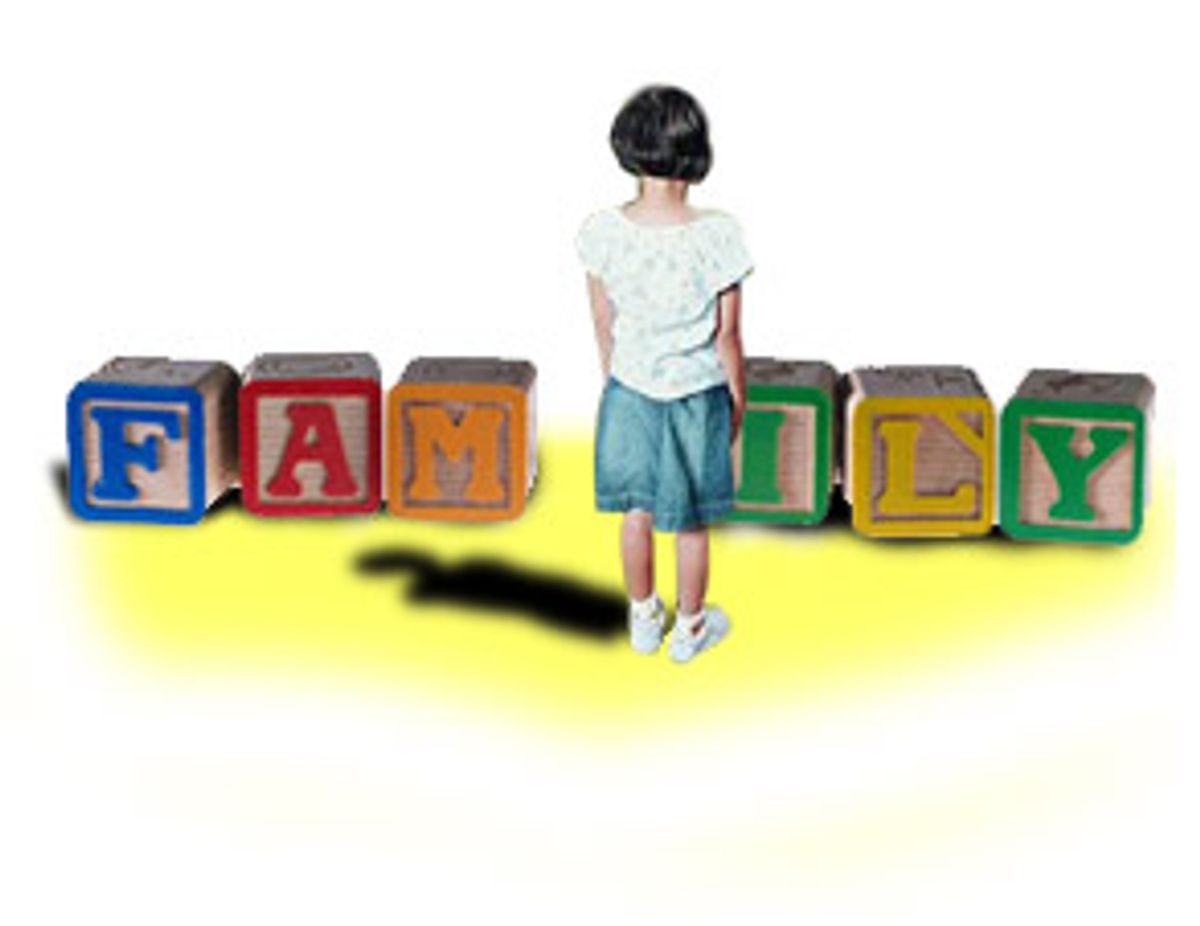 I was 27 and she was not yet 1 when we first met. As the third of six kids, I was comfortable around babies, but this situation was rife with conflicts -- a guilt-ridden father/new boyfriend, an angry mother/ex-wife and an innocent child caught in the middle. At first, she'd just stare at me warily with her startlingly blue eyes, almost as if to say, "Who are you? And why are you with my dad?" But after enough diaper changes, neighborhood strolls and peekaboo games, she accepted my hugs, her chubby arms squeezing my neck in return.

Not that it was easy at first. There were days when I resented my new instant family, planning weekends around a child who wasn't even mine. I didn't officially become her stepmother until she was 3, but by that time I was already used to Saturday night living room dates -- after her dinner, her bath and her bedtime stories, of course. I knew she'd gotten to me when she showed up in my dreams, the two of us having conversations she wasn't yet capable of.

But then she began awakening late at night and rousing me -- the light sleeper -- for a glass of water. There in the dark kitchen, like a drowsy little angel in her long white nightgown, thoughts would come pouring out, magically clear and descriptive. I'd try to recall her eloquence for her father the next morning, but -- as if those nighttime moments were meant to be our shared secret -- the words always eluded me. During the day, she struggled to integrate and figure out her two lives: "Are you friends with my mom?" she'd ask. "Why don't you come to my house and meet my two cats?" And, "My mom hates you, so I hate you." Yet, in the parking lot of ballet recitals and class plays, she'd try to join her mother's hand with mine.

Side by side on black rubber swings that burned our thighs and pinched my hips, we'd spend hours together in the park, taking turns playing our favorite game: "On hot summer days, I love to ..." Eat lime popsicles until my tongue turns green. Swing as high as the sky, touching the clouds with my tiptoes. On trips to museums or street fairs or shopping malls, strangers would say, "You look just like each other." When we'd admit we weren't actually related, they'd walk away a bit embarrassed. So most of the time we'd just smile and say thank you.

Ironically, the more disconnected I grew from her father, the closer I grew to her. By this point I loved her like my own. We baked lopsided birthday cakes, shared fries and shakes at Johnny Rockets, arranged photos just so in special albums. Whenever I'd dare consider ending our marriage, my husband would stop me with: "You can't do that to her. She needs you. She can't go through another divorce." So I stayed.

When she was 7, a baby boy changed both our lives. She was a big sister now, no longer the center of attention. And I was a full-time -- not just a weekend -- mom. But by the time we celebrated our son's first birthday, I was unable to ignore the truth. My marriage to her father was over. As I desperately fought to disengage from my husband, I slowly discovered the price of giving my heart to someone else's daughter.

The night she learned we were splitting up still haunts me. Her voice on the other end of the line was way too cheerful, as she asked when her little brother and I were returning home. I realized she hadn't been told. Pacing my sister's living room 3,000 miles away, it was left to me to say the words no child wants to hear -- particularly this child, who already knew so much about grown-up failings. "Daddy and I are getting divorced." "Divorced?! You said you weren't! You lied to me! You lied!" The fact that she was screaming at her father, not me, did little to lessen my pain.

And, just like that, our relationship was severed, along with any chance to try to explain. I asked her father over and over if I could see her but he refused. Her grandfather -- who'd once hugged me for taking such good care of her -- served the divorce papers. Friends I thought were true turned away, murmuring they'd known my husband longer. Reclaiming my life somehow made me the villain. I was offered not a single photo from our treasured pile of albums.

For a year and a half, I barely saw her and worried she thought I'd abandoned her. But one Saturday, her father agreed to a mall outing for the two of us. She'd just turned 10 and I wanted to buy her gifts, to be those two window-shopping girls we once were. On the drive over, I asked who her best friends were. "You and Vanessa," she replied. I struggled to explain that her mother and father thought it best for us not to see each other; that if it were up to me we'd get together regularly; that I would always love her. And then, because I was still the grown-up, words I knew I had to say: "But we have to respect your parents' decision." No sound from the back seat. Then, softly, "I thought you were mad at me."

Over the next three years, I continued sending her birthday gifts -- a journal to mark age 11, an Asian Spice candle when she turned 12 -- but knew little about her life, apart from the fact that she lovingly tolerated her pesky little brother, who saw her every other weekend. Then, one Sunday afternoon, waiting outside my son's religious class, I heard my name. Turning around, I saw two unfamiliar teenage girls. I stared at them for awhile, feeling off-balance, not quite recognizing the face in front of me. And then -- those piercing blue eyes. I hugged her too tightly, struggling to reconcile how the gangly little girl I remembered had transformed into this fully developed 13-year-old young woman. A bit hesitantly, as if she wasn't quite sure how to introduce me, she said to her classmate, "This is my friend Rochelle."

She's 15 now -- politically involved, socially aware and remarkably intelligent. Yet I'm troubled by a reticence when I happen to see her -- in the way she talks quickly but quietly; in the way she repeatedly glances at her father, just waiting to be pulled away; in the way she returns my hugs halfheartedly, as if afraid to reveal unacceptable feelings.

A few months ago, my son and I ran into her and their father. With the boys ahead of us, we walked arm-in-arm, talking about her classes, my writing, her blog -- in which she's as passionate about the war in Iraq as she is about her classmates' immaturity. I told her I read it often and think about her a lot. She told me she'd like to graduate early. And that she misses me.

Seeing her unexpectedly always leaves me a bit unsettled, melancholy even. I can only wonder if she's still as confused as I am about how we now fit into each other's lives. And hope the day will come when she'll understand that I divorced her father, not her. Because while grown-up love is complicated and sometimes fleeting, the love I have for her -- even as her former stepmother -- is much simpler. It's unconditional.

Rochelle L. Levy is a writer living in Los Angeles.