Not just a socialite, but a gritty survivor

Susan Mary Alsop, who died last month, faced a personal crisis when the KGB tried to smear her influential columnist husband, Joseph. A friend recalls her courage in the face of that ordeal. 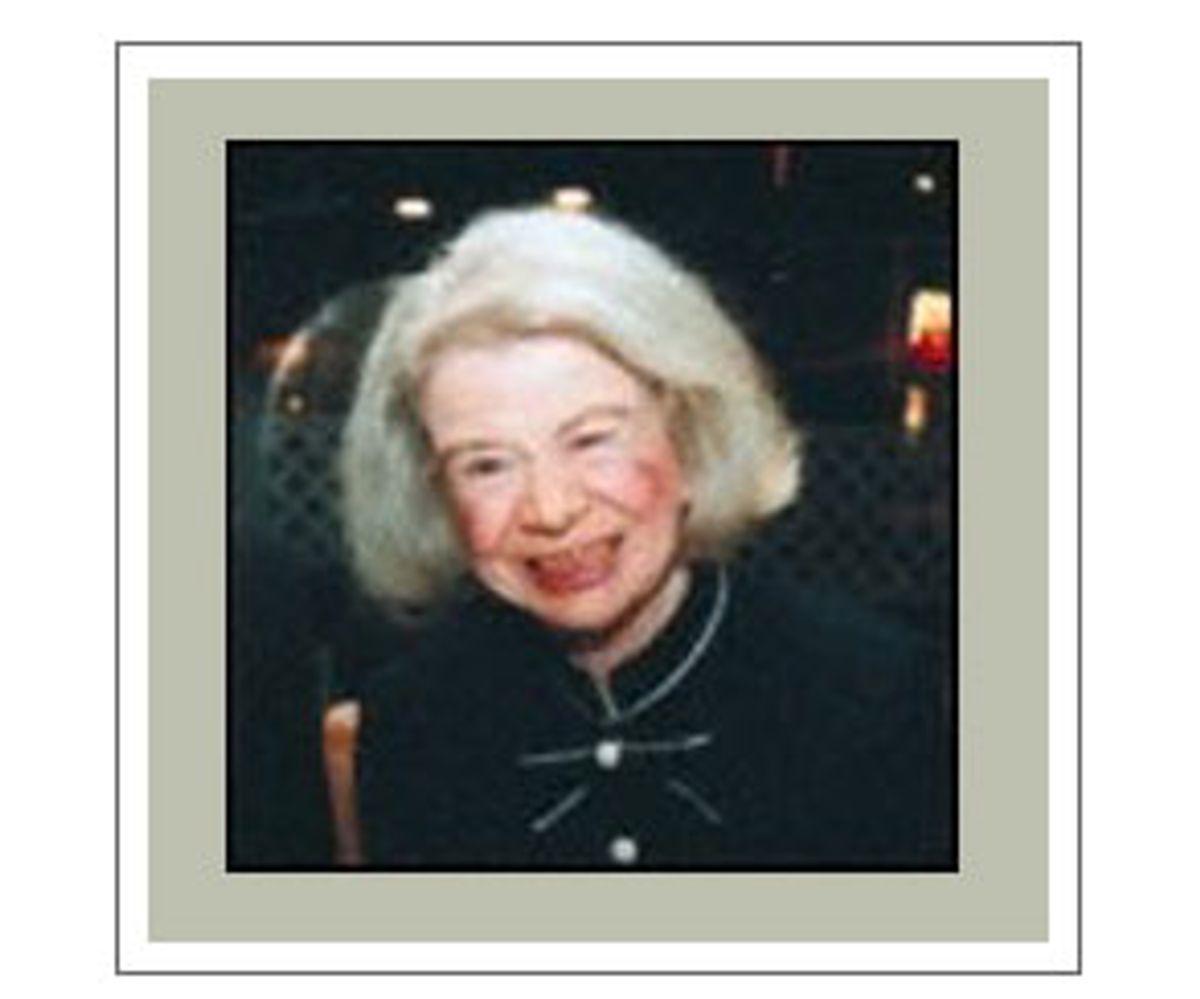 The scene at Christ Church in Georgetown, in Washington, for Susan Mary Alsop's memorial service last week reminded me more than a little of that last party in Proust where everyone is the same but much, much older. And allowances made for era and nationality, it was the equal in elegance. But no one who encountered her, however casually, would reduce Alsop in death to the dismissive word "socialite," as did the headline on her obituary last month in the Washington Post.

True, she was descended from distinguished early-American families -- she was originally a Jay of the John Jay line; and her social contacts on two continents were unmatched for variety and intimacy. In youth she had been courted by English and French nobility and introduced to Edith Wharton, the chronicler in fiction of old New York. But so were many who lacked her gaiety, urbanity, intelligence -- and accomplishments. In later life, she had carved out a niche for herself as a writer on architecture and diplomacy.

I came to know her because 10 years ago I wrote a small book, "Joe Alsop's Cold War," about her former husband, the Washington columnist and gourmet. It fell to my unintended lot to discover and reveal for the first time in print a haunting episode in Joe Alsop's life (and in hers too, after she became his wife).

In 1957, during his first and only visit to the Soviet Union, Joe was entrapped by the KGB in a Moscow hotel room in a compromising situation with another man. Photographs were made, apparently meant to be used in retaliation for Joe's fiercely anti-Soviet polemics. They never were, but thereby hangs a tale.

I knew nothing of this episode when I began planning my book. And though I had been in Joe's company a good bit during my years in Washington -- he was a fabled host -- and had combed his colorful archive at the Library of Congress, I had heard nothing of the matter. Then one of his friends I was interviewing suddenly asked, "How are you going to handle the Moscow episode?" What Moscow episode? I asked. The story followed.

Dealing with the sexual secrets of a man whose writing I had admired for decades -- it was one of the ornaments of my craft -- wasn't something I had been bred or trained to do. But I soon learned that "everyone" in his circle of dedicated friends (and enemies too -- few were neutral about Joe) knew the story and expected it to be dealt with in any useful account of his life. How to handle it? In particular, how to address delicate questions to his former wife (and continuing friend and hostess), Susan Mary, the woman he had married when her first husband, his close friend, died and left her with small children and limited resources?

Fortunately, my wife is a skilled psychotherapist accustomed to dealing, confidentially, with hidden intimacies. In contrast, I grew up in a world of genteel reticence in which sexual gossip about one's friends was forbidden and in which scandals lay discreetly behind a veil of secrecy.

Accordingly, in preparation for asking the awkward questions I knew I must ask, I sought my wife's coaching. She told me what questions to ask and how to ask them. I listed them on a yellow pad and kept my appointment with Mrs. Alsop. We seated ourselves in her beautiful drawing room in Georgetown, with the Gilbert Stuart portrait of "silly old John Jacob Astor" at one end (she never explained what was silly about him) and, at the other, the portrait that her ancestor John Jay had commissioned of Baron von Steuben. Timidly, my eyes glued in mortification to my yellow pad, I swallowed hard and played my gambit: "What, er, about sexuality?"

I needn't have fretted. With disarming aplomb, candor and sympathy she told me the full story. She and Joe had been best friends for years -- their vivid correspondence is one of the many gems of the Alsop papers -- when Joe called on her one day in Paris after her husband, Bill Patton, died. He asked her to marry him.

"I was stunned," she said, "by Joe's proposal, but even more stunned when he said, 'Susan Mary, there is something you should know before you answer.'" That something was that he was gay -- of course she didn't use that silly but now inevitable word. "But I want to take care of you and the children," he said. She accepted and moved to Washington, where she and Joe were at the epicenter of President Kennedy's social circle during those legendary 1,000 days.

That was far from the end of the story. Some years after Joe and Susan Mary married, the KGB intensified its smear campaign, apparently thinking Joe, the cold warrior par excellence, could be bullied into silence. Someone wrote "Joe Alsop is queer" on the dusty windshield of a car parked outside their house. She consulted Joe's relatives for advice. No one would help. "Alsops aren't homosexual," she was told. Then the KGB played what it apparently deemed its trump card. The compromising Moscow photographs were anonymously mailed to a number of Joe's colleagues, including columnist Charles Bartlett; the late Philip Geyelin, then editorial page editor of the Washington Post; and improbably, one of the great gentlemen of American journalism, humorist Art Buchwald.

The inclusion of Buchwald showed how dense the KGB gumshoes were. Buchwald had caricatured Joe, who could be pompous, in a Broadway comedy of his called "Sheep on the Runway," and Joe had proclaimed that he would not enter a house where Buchwald was received. The Russkies must have thought Buchwald would be eager to get back at Joe, but then no one ever accused them of grasping the nuances of American political and social life. It was a grotesque miscalculation and the beginning of the end of a nasty campaign.

The harassment did not stop until the Russians were put on notice through back channels that the CIA had dirt with which to retaliate. What I recall from that afternoon in Georgetown as Susan Mary Alsop told the story so serenely was the courage -- and humanity -- with which she had faced an unexpected and harrowing ordeal.

And who were Joseph Wright and Susan Mary Jay Patton Alsop? Both were high-born, as American lineages go. Joe was the grand-nephew of President Theodore Roosevelt, hence a cousin of the later White House Roosevelts, a connection he exploited to useful effect when he came to Washington in the mid-'30s as a correspondent for the New York Herald Tribune. In those younger years Joe was one of the whiz kids of American journalism and a widely read syndicated columnist in his 20s.

After World War II, when he and his brother, Stewart, returned from distinguished military service, both became powerful anti-Soviet voices but also stalwart defenders of the open society at home. They distinguished themselves as critics and hair shirts of our most dangerous and disruptive postwar demagogue, Sen. Joe McCarthy, and played a key role in his downfall. Joe defended the great physicist J. Robert Oppenheimer, "father of the atomic bomb," against a ludicrous removal of his security clearance by the Eisenhower administration. In short, Joe was -- and defined -- the "Cold War liberal," as the patronizing term now has it. He died in 1989.

Readers of the recent obituaries for Susan Mary Alsop could feast on colorful reports of a fairy-tale life among the high and mighty and elegant, some of them even true. But the woman I knew was a gritty survivor who had been rescued by Joe Alsop from a vulnerable widowhood, only to find that he too was vulnerable in unsuspected ways. She met the challenge with loyalty, resilience and humanity, and that is the way I shall remember her.