The stock market is voting for Kerry

When the market goes down, incumbent presidents tend to lose. It's down now, and headed further south. 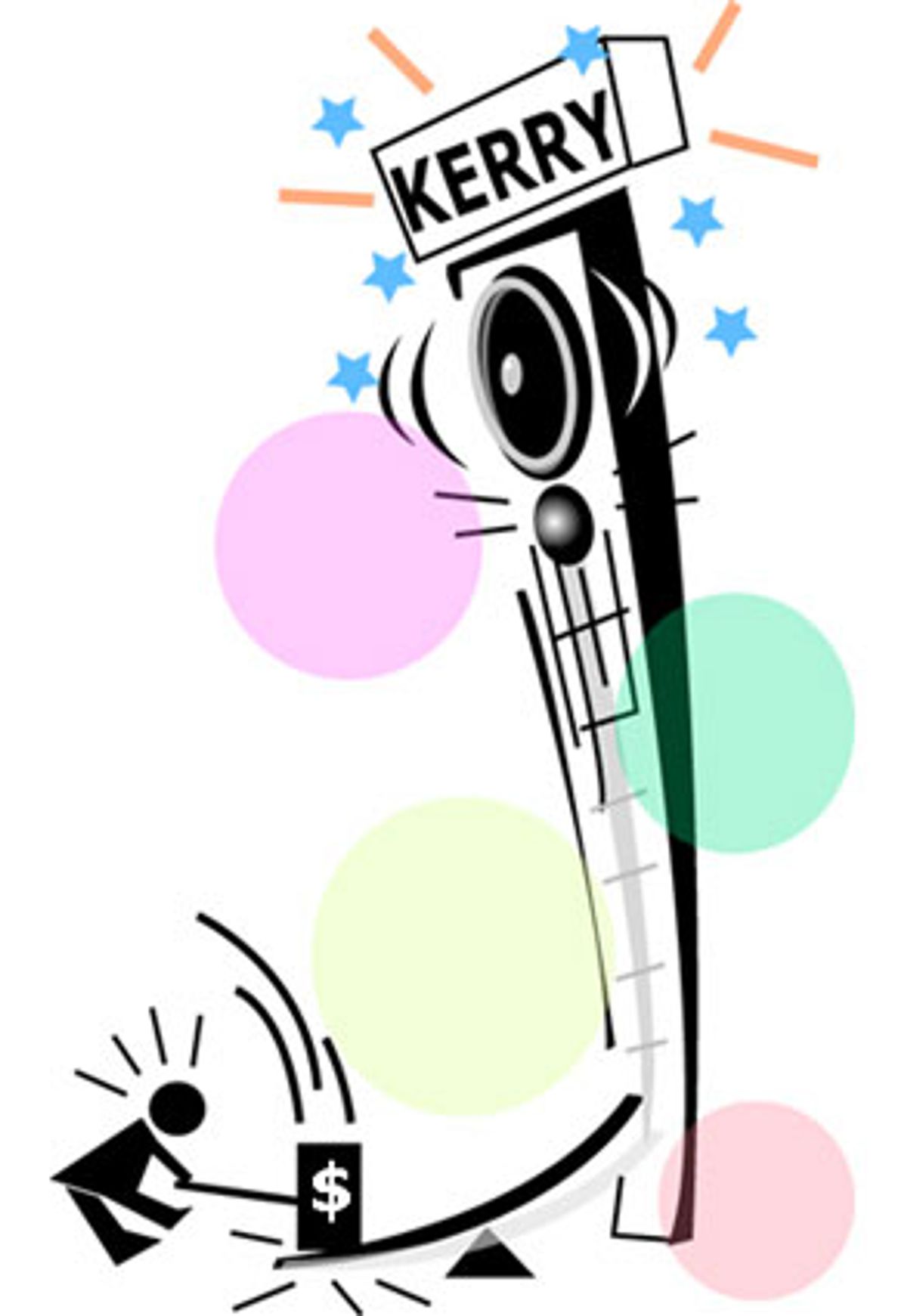 The polls are bleak for John Kerry one month before the presidential election, but there is one prognosticator that is on his side: Mr. Market. According to stock market history, which rarely records a win for an incumbent in a year when the market is down, the trend lines indicate that Mr. Market likes Mr. Kerry. What's more, the market is showing clear signs it's about to sink even further in the crucial month before the election.

The general public may have a vague sense that if the stock market is down it's bad for the president and vice versa. Guess what, the experts agree. Jeffrey A. Hirsch, editor in chief of the authoritative Stock Trader's Almanac, slavishly parses every conceivable stock market statistic and trend. Hirsch has tracked presidential election cycles back to 1833 and found a definite pattern: During the year before an election the stock market performs the strongest, averaging a 10 percent return, possibly from the incumbent goosing the economy to look good. Election years boast the second best average: just under 7 percent.

(Then, the chickens come home to roost: The first year of a new term is almost invariably lame. It has the lowest average: 1.6 percent. And the next year is up about 4 percent.)

It's important to remember that the touchstone here is not flat zero: During a typical election year, the market goes up about 7 percent. Since the 20th century, when the president (or his party) stays in the White House the market rises an average of 16 percent that year. If the voters toss them, the Dow averages a 1 percent loss that year.

The market so far this year is down, no matter what flavor index you prefer. The big companies of the Dow are down 4 percent and the tech companies of the NASDAQ have slipped 7 percent. Both broad indexes, S&P 500 and the Wilshire 5000 (the stock geek favorite, which includes all regularly traded stocks), just slipped into negative territory in mid-September.

The measure that most people look at to study the relationship between the market and elections is the entire calendar year, the end of which is still a frustrating three months away. Lucky for us, Hirsch has some other metrics to try: January, the first four months, and the month of October.

The theory is, as January goes, so goes the year. Then to get a sneak preview of the sneak preview, he looks at the first five days of January. So, in early January Mr. Market (legendary fundamental investor Benjamin Graham's nickname for the manic-depressive, sometimes idiotic personification of the market) was shouting, Go Bush, playing Lee Greenwood really loud and extolling the virtues of Bush's strength of character to anyone who would listen. By the end of January, however, his enthusiasm was waning and he was getting annoyed about rising interest rates, the deficit, unemployment, the housing bubble, the war, oh, the list could go on and on. Maybe he was still wearing a Bush pin, but in his heart he was one of those dreaded undecided voters: The Dow was up only 34 points or three-tenths of 1 percent.

Hirsch's next big marker is how the market was doing by the end of April. The Dow was down 226 points or 2 percent. Mr. Market had switched sides! Mr. Market was now preoccupied with Iraq and oil prices and watching Jon Stewart every night. Over the last half-century, Hirsch has found that if the market is down by the end of April, then the odds are 5 in 6 that the incumbent will lose.

Could Mr. Market really be favoring a Democrat? Haven't we always been told that Mr. Market is a tax-averse Republican, who delights in dismantling environmental regulation and sputters with rage at the thought of universal health insurance or consumer lawsuits? Mr. Market doesn't feel that Republican anymore. Mr. Market had a great time under Clinton, but has been kinda blah under the current leadership. Since 1901 the Dow has returned 9.1 percent under Democrats but only 6 percent under Republicans. So, it's not that Mr. Market gets sad when he sees a Republican losing, as some have argued. It's more that Mr. Market, the eternal nonpartisan pragmatist, looks at the current economy and weeps. What's more, there are plenty of signs that Mr. Market is on a boozy downward spiral that he may not snap out of anytime soon.

Investors' intuition tells them that October is a lousy month for the market -- mainly because of that whole 1929 and 1987 thing -- but here experts disagree. As Mark Twain once wrote: "OCTOBER: This is one of the peculiarly dangerous months to speckulate in stocks in. The other are July, January, September, April, November, May, March, June, December, August, and February." Turns out, according to Hirsch, who has inevitably studied this sort of thing, September is actually the worst month, averaging a 0.7 percent loss, compared to a 0.8 percent gain for October.

So, it's not that the month of October is generally bad. Instead it's a grim outlook for world events and the U.S. economy that's weighing heavily on Mr. Market. Even if Mr. Market pays attention just to sensible fundamental indicators like earnings growth, he gets downhearted: Those numbers are expected to drop in the third and fourth quarters. There are some good things going on in the economy, but Mr. Market seems preoccupied with slipping consumer confidence, the legions of unemployed and oil hitting $50 a barrel.

Then there's the technical side of things. Mr. Market has taken a shine to chart reading. Technical analysis has become so popular it's become a self-fulfilling prophecy: So many people do charts, that when they act on the chart signals (buying when the chart looks optimistic, selling when it paints a bearish picture) the extra demand pushes the price in the direction they expected. What the charts are saying now is that the markets are going to be down for the next month or so, during Hirsch's key October election indicator.

The market has bobbled all year, but there's been a pattern to it and the pattern is headed down for the next few weeks. Until March it moved in waves, getting progressively higher. Since then it's moved in a pattern that traders are familiar with and find distressing: lower highs and lower lows. The market keeps moving up and down, but it's gradually sinking. It recovers, but never quite as strong as the time before. The S&P 500 hit its most recent peak Sept. 21 at 1,131. The previous, declining peaks had 1,163 in March, 1,150 in April, 1,146 in June. A look at the peaks and lows also outlines the S&P 500's declining trading "range" -- the difference between the highs and lows.

Traders like to draw lines on their charts to show a trading range. There are now so many people drawing these lines that the lines themselves act like a fence that becomes hard for a stock to break through: They form "resistance" for a stock heading up or "support" for a stock that would otherwise sink. But if the price does manage to break through the lines, watch out; it's likely to surge in whatever direction it's been heading.

There are other indicators chart readers are looking at now, too: All the indexes are below their 200-day moving averages. That's what's known as the "death cross," a sign that gets Mr. Market spooked. The other big technical tools -- stochastics and Moving Average Convergence Divergence -- also give a big thumbs down for the near term.

There is a question of timing: This wavy, declining chart pattern shows itself in all the major indexes. But while the NASDAQ, S&P 500 and Wilshire all peaked on Sept. 21, the Dow peaked on Sept. 9. That could be key because the charts say the market is likely to dip down and come back up. The Dow is already off 3 percent from its peak. The other indexes have fallen about 2 percent and the charts say the S&P 500 will probably hit "support" at about 1,050 and bounce back. In other words, Democrats should be looking for the market to be flat till October, then slide down, Republicans would rather it dropped now, then bounced back.