The Iowa Electronic Markets are still going for Bush

Election-predicting traders are betting not just on a narrow Republican victory, but a landslide. What's behind the Bush bubble? 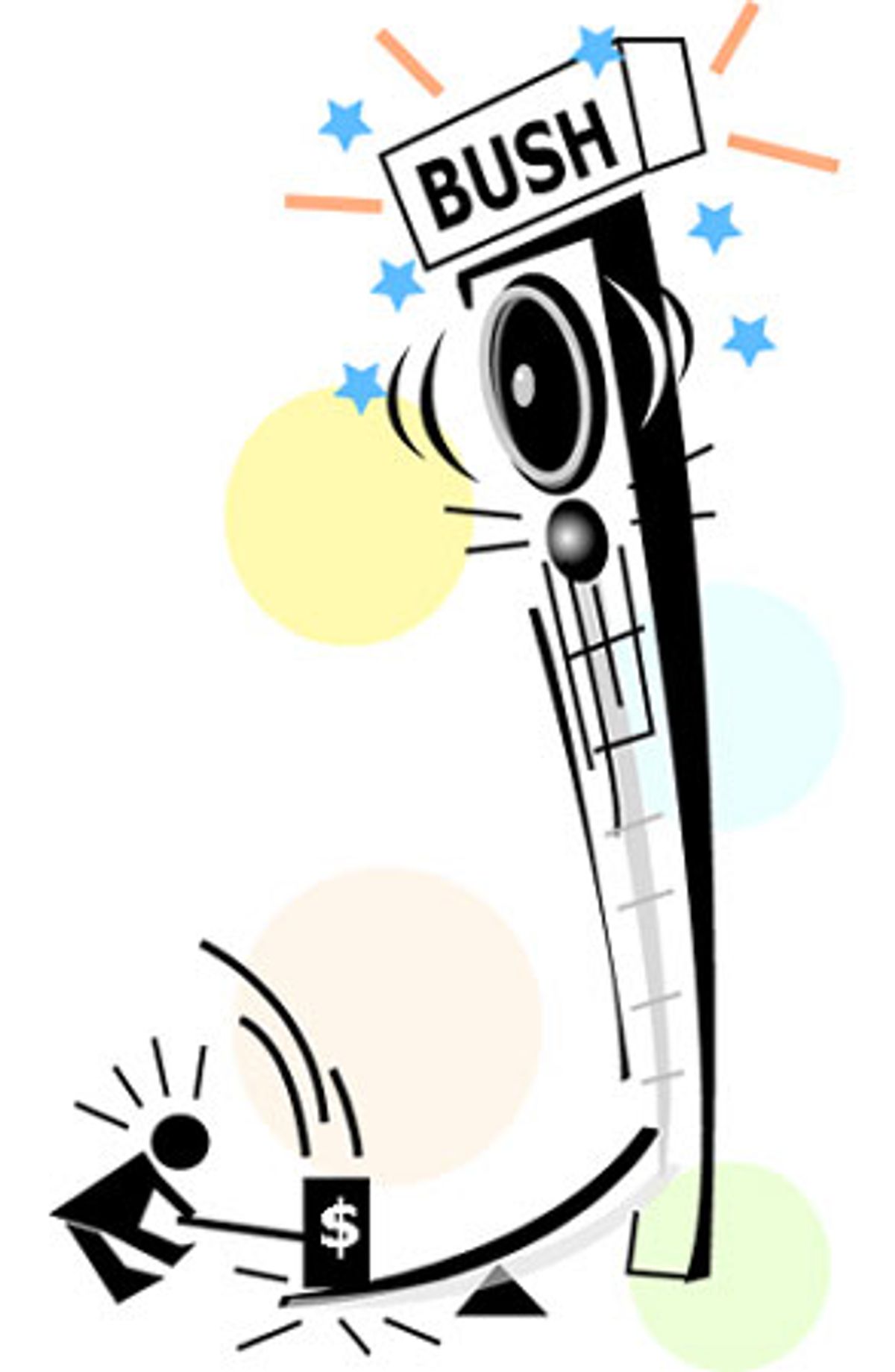 It might seem difficult to recall now, but just over a month ago, in the middle of August, John Kerry's star shone the brightest in the political firmament -- polls had had him up against George W. Bush in national races, he was ahead in key battleground states, and commentators, impressed by his acceptance speech at the Democratic Convention, were declaring the race "John Kerry's contest to lose." The zeitgeist was decidedly on Kerry's side; only one stubborn measure, the price of Kerry shares on the Iowa Electronic Markets, seemed to point to the possibility of the senator's loss in November.

The IEM is a real-money, Web-based system on which anonymous traders buy and sell contracts that offer payouts based on actual events. On the IEM's presidential election market -- which I've been playing since June -- you can exchange shares of Kerry and George W. Bush according to your guesses about how each man will do on Election Day; the price of each candidate's stock reflects the traders' collective forecast of who will win in November, a forecast that, in the past, has proven quite accurate. As I wrote in August, it seemed rather curious that Kerry's lead in the polls and among the pundits was not reflected in his stock price: Why were the IEM's traders not captivated by Kerry's speech, as was the rest of the nation? Did they know something that the pundits did not?

Looking back, it seems they did. Perhaps Kerry's low stock price did not point out the specific problems that led to his subsequent decline in the polls -- the numbers didn't lead us to watch out for attacks on Kerry's Vietnam service, for instance -- but you can make the case that the mid-August market indicated real uncertainty about Kerry's ability to run a winning campaign, uncertainty that now seems thoroughly justified. Traders on the IEM were not clouded by emotion, by a desire for a Kerry presidency, by pat political theories having to do with perceived Kerry "momentum" -- instead, when they looked at Kerry they saw a tough rough road ahead, and while the rest of the political establishment swooned, they stayed in their seats. And, so far, they've been right.

As I've written, I'm supporting Kerry for the White House, but on the IEM, I've been betting on Bush. This is not meant as a slight against Kerry -- it's just that I have doubts about his ability as a campaigner, and more important, I think that the Bushies are extremely good, not to mention that historically, incumbents running during a time of economic growth tend to win reelection. So far, alas, my bet is panning out, as measured not just by Kerry's shortfall in the polls but also by the current performance of Kerry shares on the market. As of Monday, traders on the IEM give Bush about a 70 percent chance of winning in November. To look at the graph of the IEM is to despair over the prospect of four more years -- a confident red line aims straight for the stratosphere, while a morose blue line nosedives.

For the first time since I started playing the market, though, I must say that I'm dubious of the IEM's high valuation of Bush. Here's why: On Sept. 21, the gurus who run the IEM split the two main share contracts -- one Bush contract, one Kerry contract -- into four share contracts. Now, instead of betting either that Kerry will win or that Bush will win, you've got to also guess what percentage of the popular vote the candidate will get. You can buy a Bush contract that will pay you off only if Bush receives more than 52 percent of what's called the "two-party popular vote," which is a measure of the popular vote that excludes third-party candidates such as Ralph Nader; or you can buy a contract that will pay you off only if Bush wins between 50 and 52 percent of the two-party popular vote. Similarly, you can purchase a Kerry contract that will pay you off if Kerry wins between 50 and 52 percent of the vote, or one that will pay off if he wins more than 52 percent. The IEM trader is thus asked to forecast both the winner of the election as well as the size of his mandate: Who will take the White House in November? And will he win big?

What's happened since the stock split seems strange. Share prices corresponding to either a small Bush win or small Kerry win have remained relatively low, while shares for contracts that say that Bush will win big have skyrocketed. On Monday, a Kerry small-win share was selling for about 22 cents; a share corresponding to a small Bush win was priced just a bit lower, about 21 cents. A share saying that Kerry would win big was selling for about 7 cents. And then the big one -- shares for contracts saying Bush would win by more than 52 percent of the vote were selling for 51 cents, and that price has been rising over the past few days. What this means is that according to the collective wisdom of traders on the IEM, there's a better than even chance that Bush will win in a landslide on Election Day.

To me, these numbers seem off. Everything we know about this election says it's going to be close. In the last two weeks, only Gallup's polls have shown Bush leading Kerry by more than a three- or four-point margin, and those surveys have been criticized for possibly oversampling Republicans in their calculation of how many voters are "likely" to come to the polls on Election Day. Just about every other national poll shows either a dead tie or Bush with a tiny lead.

Of course, it seems possible that, despite the polls, Bush could win more than 52 percent of the vote; nobody would be astonished if that occurred. But the IEM's traders aren't saying that this outcome is merely possible -- they're saying that Bush's winning big is the most likely outcome in the presidential race, more than twice as likely as the prospect of Bush's winning small. Bizarrely, the traders believe it is more likely that Kerry will win the race than that Bush will win with a small mandate. If Bush wins at all, they're saying, he will win big.

To figure out the IEM traders' reasons for betting on a Bush landslide, I thought it might be a good idea to look back at the history of presidential elections in America and count the number of elections in which candidates won big. Using raw data I found on the trusty Web, I constructed a spreadsheet to calculate the two-party popular-vote share of all the Republican and Democratic presidential candidates since 1900 -- that is, the vote share of the candidates that eliminates the effect of third-party candidates. What I found surprised me: It turns out that of the 26 presidential elections conducted in America since 1900, in the vast majority -- 21 -- the winning candidate has received more than 52 percent of the two-party vote. Bill Clinton did it in 1992 and 1996. George H.W. Bush did it in 1988. Ronald Reagan did it twice. Richard Nixon did it in 1972. Indeed, the only presidents since 1900 who failed to win more than 52 percent of the two-party vote were Woodrow Wilson in 1916, John F. Kennedy in 1960, Richard Nixon in 1968, Jimmy Carter in 1976, and George W. Bush in 2000. In other words, winning big is the norm, and close elections are the exception.

It is most likely this history that explains the IEM's swing toward shares rewarding a big Bush win. But I'd be remiss not to discuss some other theories that Salon readers have proposed to explain Bush's IEM success. One idea is that the IEM's traders are biased toward Republicans. Trading in a stock market, this theory goes, is the province of wealthy people, and the wealthy are probably favoring Bush in this election. Therefore it's no wonder that the wealthy people who are on the IEM are choosing Bush.

But that theory rings hollow. First, you don't need to be especially wealthy to be on the IEM. I invested in the market with only $30, and the IEM sets a maximum for each account at $500. You're not going to find people at the poverty line investing in presidential futures, but it doesn't have to be the domain of millionaires, either. The IEM is also not unknown to liberals; it's been featured here in Salon, in the journalist James Surowiecki's book and his New Yorker column, in the New York Times, on PBS, and on many lefty blogs. If Democrats really believe that John Kerry's chances are better than the IEM says, why don't they sign up to the market and start bidding up Kerry shares?

Salon readers have also floated the idea that Bush is doing well on the IEM because it's possible that some event in the late stages of the race could decisively tip the election toward the president, while nothing could really decisively tip it toward Kerry. This is the "October surprise" theory -- if there's a terrorist attack or if Osama bin Laden is caught, or even if we see unexpectedly good economic news during the next two months, Bush will win. I see some truth to this idea; I think it explains why, for instance, shares for a big Kerry win are selling so cheap.

Finally, there is the possibility that we're living in a Bush bubble, a moment when all rationality has gone for a walk. Looking at the inexplicable price rise of shares for "big Bush win" contracts over the past week, I must say that I've thought on more than one occasion that the traders buying that stock can't be thinking rationally. Before we've seen a single debate, how can you confidently venture that there's a 50 percent chance that Bush will win handily in November? Could it be that the traders buying these shares aren't doing so because they believe that Bush has such good odds to win big but, instead, because they think there are other people who believe this of Bush who'll be willing to buy the shares for even higher prices? Bubbles aren't common in a market like the IEM, where each contract has a definite value -- $1 on Election Day if the contract wins, nothing if it loses -- but they can still develop when each trader buys a share in the belief that he'll be able to sell it to another sucker for a higher price the next day. Is this what's happening on the IEM? Has Bush become the stock of suckers?

And my dream scenario (financially) would be for Bush to win with less than 52 percent of the vote. In that case, I'd win $57 in the market, $27 more than I invested, which wouldn't be a bad way to kick off four more years.