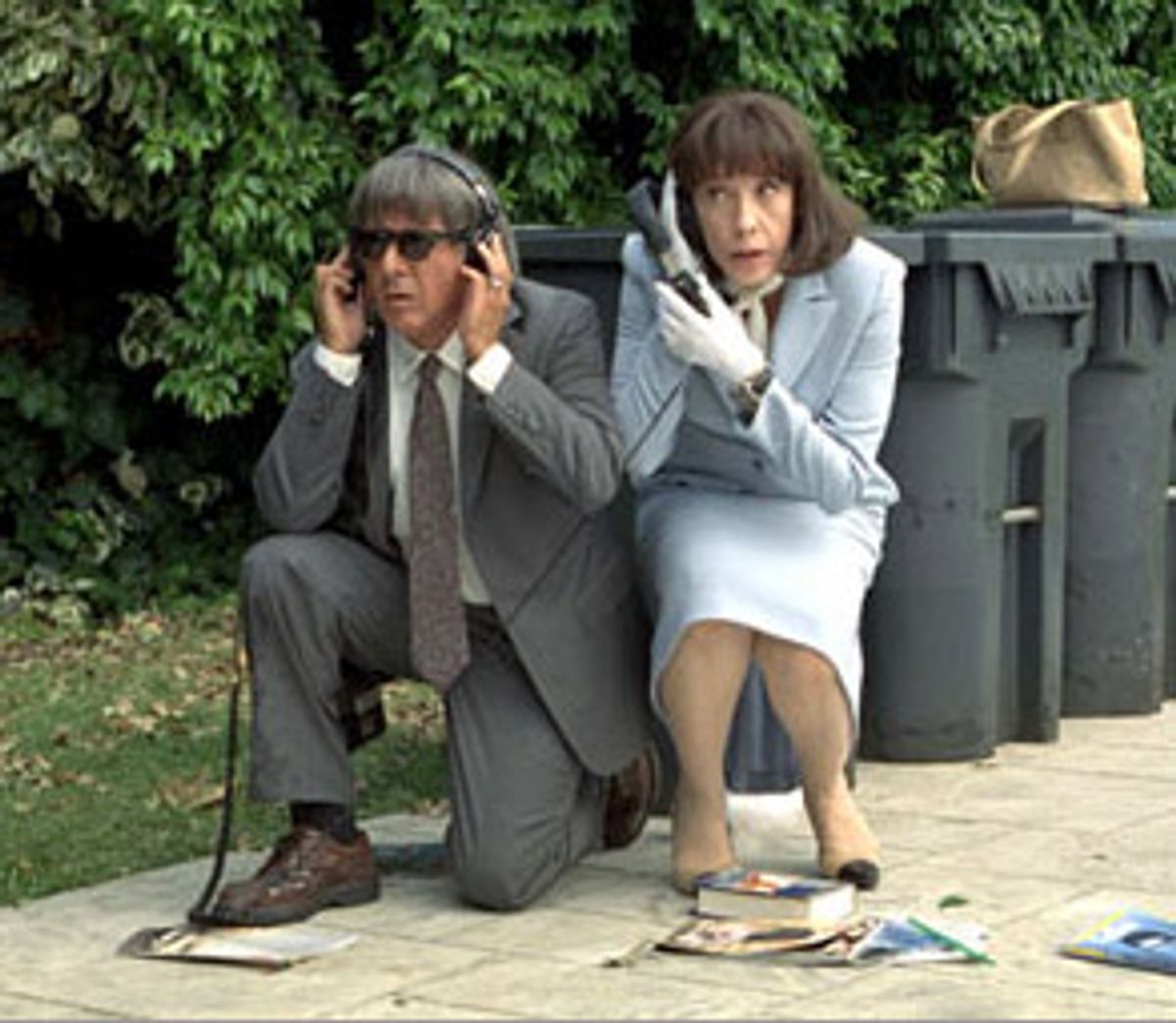 David O. Russell's fourth picture, "I Heart Huckabees," is one of those deeply well-intentioned failures that springs from the fallacy that movies need to be about the thing they're about -- and if you think I've just set up a confusing construct, just wait till you see this movie.

Albert Markovski (Jason Schwartzman) is a young poet-activist who has set up a deal with Huckabees, a Target-type superstore chain. The company is helping to sponsor his environmental-preservation program (it's called the Open Spaces Coalition) as a community goodwill-slash-P.R. campaign. Albert has to deal one-on-one with ambitious, shallow Huckabees slickster Brad Stand (Jude Law), who is in most ways his polar opposite. Not only does Brad make tons of money; he also gets to date Dawn (Naomi Watts), the willowy-but-perky Huckabees spokesmodel, who's just as shallow as he is.

Brad never thinks at all, while Albert thinks way too much. After encountering a tall, striking-looking African doorman in several disparate places, Albert, believing that such a coincidence must surely mean something, seeks the counsel of Bernard and Vivian Jaffe (Dustin Hoffman and Lily Tomlin), a husband-and-wife team of "existential detectives," whose job is to help clients burrow deep into their lives to uncover the essence of existence itself (or something like that). Just as the Jaffes get to work, though, their former student and current rival, the existential seductress Caterine (Isabelle Huppert), appears on the scene to drag Albert off the track of enlightenment they're hoping to set him on.

So Albert and Caterine make love after rolling in the mud (as one does, when one seeks the meaning of existence), and other stuff happens too: As he shambles forward on his quest, Albert meets one of the Jaffes' other clients, troubled firefighter Tommy (Mark Wahlberg). In the midst of their soul-searching, the two tussle like sibling lion cubs, sometimes at odds and sometimes in sync. Somewhere in there, Watts' Dawn shows up in shapeless overalls and a sunbonnet, chewing on something that looks like dirt, at which point I realized the meaning of life can never be found on a movie screen -- only through the exit door.

"I Heart Huckabees" is obviously a very personal film for Russell. He admits he has long been interested in Zen Buddhist teachings, and he spent a great deal of time and effort to get "Huckabees" made. But "Huckabees" feels weirdly impersonal; very little love, or even true thought, shows up on the screen. The characters are mouthpieces for concepts and nothing more -- we never understand them as people, which is probably not supposed to matter. What matters, I guess, is Albert's quest, which Russell clearly identifies with. (He co-wrote the script with Jeff Baena.) To paraphrase Jerry Lewis in "Hollywood or Bust," Russell is soiching -- soiching! He dunno what he's soiching for, which is why he's soiching.

Even though Russell thinks he's giving us depth, his depth is all surface: He's written a slapstick philosophy textbook packed with so many gimmicks that we forget what the ideas are in the first place. I hesitate to speak so harshly of a gifted filmmaker whose work I've loved so much: Although I couldn't sit through "Spanking the Monkey," Russell's "Three Kings," one of the great films of the '90s, really is about the urge to extract meaning from absurdity.

But "Huckabees" feels like the work of a man who's sorting out his problems at the expense of the audience. The gags wobble and weave before plooping over sideways, exhausted. The actors (all save Wahlberg, who turns the suffering of his character into something palpable instead of just a jittery haiku) fumble their way along, unclear about who their characters are and what their lines really mean: Tomlin, an actress we don't see on-screen often enough, is wasted here -- her timing is genuinely Zen in a movie that's only conceptually Zen, and the disjunction between the two feels like a cruel joke. Hoffman waddles and mutters through his scenes like a confused ghost. Schwartzman pours nothing but hipster blandness into his character, Law puts visible effort into pulling off a semi-believable American accent, and Huppert stalks around in a couture trench coat, looking dry and pinched. These actors are woiking -- woiking! -- and yet nothing they do works.

"I Heart Huckabees" might have been conceived as a warped bookend to one of Russell's earlier pictures, the marvelous "Flirting With Disaster," in which new dad Ben Stiller, an adopted son, sets off in search of his birth parents. But it has none of that movie's wicked spark. In fact, it has no sparks at all. There's something drably accusatory about "I Heart Huckabees," as if Russell were outraged to think that he's the only one who troubles himself thinking deep thoughts about interconnectedness and isolation.

The hardest thing to reckon with is that "I Heart Huckabees" is desperately sincere: Russell wants us to care about these deeper meanings, but he can't lead us to see them for ourselves. In "I Heart Huckabees" he has connected only with himself. Maybe this is the sound of one hand clapping. Or maybe just that of the monkey being spanked.