This love story about a soldier and a country boy from Thai director Apichatpong Weerasethakul makes you feel as if life itself is unfolding on the screen. 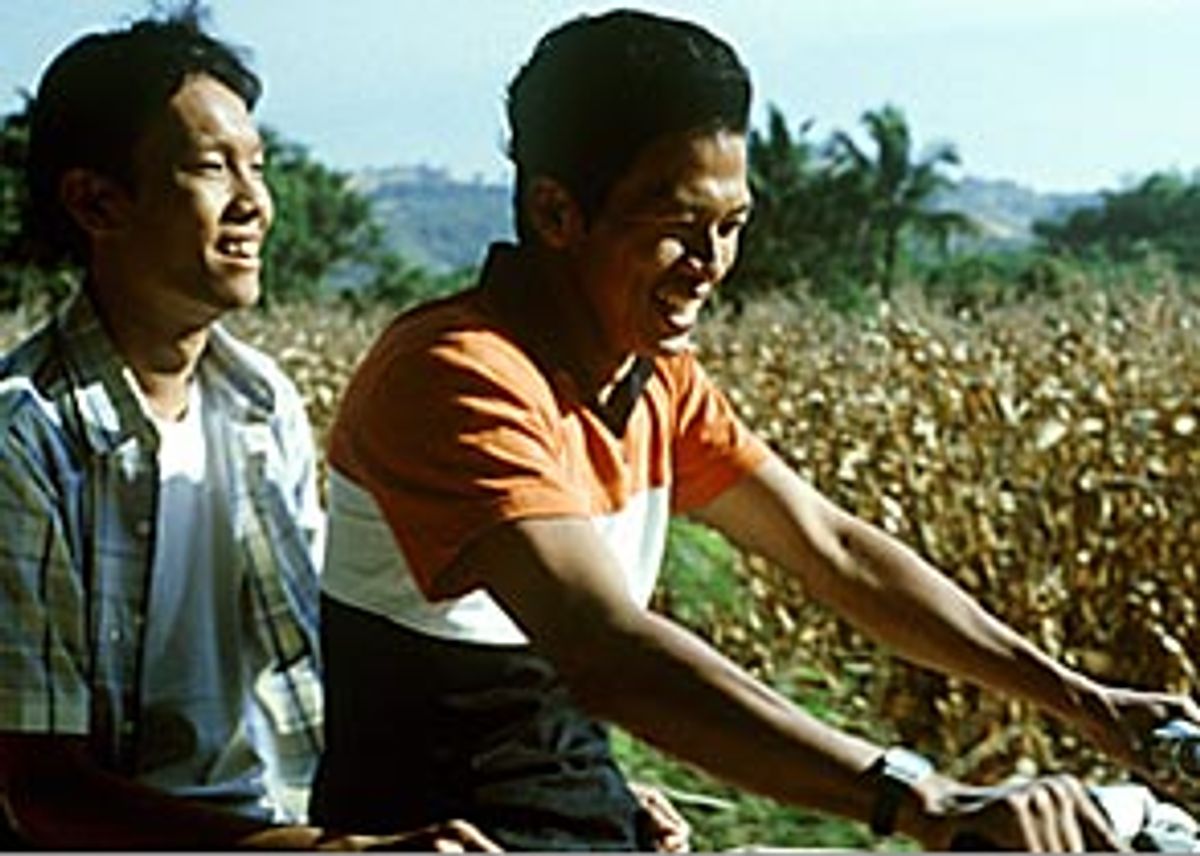 If we're honest, most of us would admit that our spirits sink when we hear a movie described as "pastoral." Too often the term has been used to signify pictures that are lovely, composed and becalmed to the point of deadness. This year's "Spring, Summer, Fall, Winter and ..." is the perfect example of this sort of movie, the kind that takes about five minutes to make you wonder how you're going to get through the next two hours.

The two fictional features of 34-year-old Thai director Apichatpong Weerasethakul -- the 2002 "Blissfully Yours," just beginning to be released theatrically here, and the new "Tropical Malady," which is in the New York Film Festival and opens in theaters next year -- are certainly pastoral. Each film starts out in Bangkok before moving into the Thai forests, and once they get there, they progress at the speed of nature.

One of the truest sensualists to emerge in movies in recent years, Apichatpong makes you feel as if life itself is unfolding on the screen. He does it mostly just by allowing his characters to bask in their rural surroundings. When the lovers in "Blissfully Yours" lie in the sun, the camera stays on them to give us the feeling of sun-drenched contentment. We're aware of details like the beads of sweat just visible at the girl's hairline and the repeating patterns of the bird calls high above them. The effect may seem anti-dramatic, because events are not heightened or "edited"; but Apichatpong gives us the ability to live in each moment with the people on-screen, and at moments it feels indefinably precious.

Of his two fiction features (his first feature, the 2000 "Mysterious Object at Noon," is an impressionistic documentary), "Blissfully Yours" is the more accessible and, I think, the better film. It opens in a way that makes you think the projectionist has screwed up the reels: with no titles, right in the midst of a scene. We watch as a young man with a strange skin disease, his factory-worker girlfriend and an older woman who is their acquaintance (and perhaps more) consult a doctor, do their marketing, visit the woman's husband at his place of work. We pick up information about these three and the way they are connected in scattered bits and pieces. The overall effect is static: There's no music, and the film comprises long takes in which the camera doesn't move.

The young girl, Roong, lies to her boss to get the afternoon off, and she and the young man, Min, take off for a day trip into the country. Only then, 45 minutes into the movie, do the opening credits come on as the soundtrack fills with a Thai pop cover of an Astrud Gilberto song. Suddenly everything that had seemed prosaic and dreary is transformed with the promise of freedom, even if that freedom is limited to an afternoon of playing hooky. It's as if Apichatpong is saying, now that our deadening routine is finished, the movie -- and thus pleasure -- can begin.

The hour and 20 minutes that follow are Eden. We watch Roong and Min enter into a secluded grotto where they don't do much more than laze in the sun, nibble at their picnic, make love, doze. Apichatpong communicates a feeling of peace and contentment with shots as simple as the lovers caressing each other's feet beneath the waters of a running stream. As an expression of the fragility of perfect moments, this is the closest movies may ever get to Manet's painting "Le Déjeuner sur l'herbe."

"Tropical Malady" is more a film of payoffs than a sustained flow of realized moments. It's a far more elusive and abstract movie, and while it's not as satisfying as its predecessor, it has the excitement of a talented young director working his way toward something new, even if he's not sure what.

There's an unresolved tension in "Tropical Malady" between the director's control and the inchoate feelings he's depicting. The movie teeters on the brink of the irrational, or to be more precise, it ventures into territory where the links being made are poetic rather than literal or narrative ones.

Were Apichatpong in less control, the movie might simply feel crazy. And in a weird way, the unresolved tension works for the movie. The movie treats the irrational in reasonable terms -- monkeys talk; the soul of a dead cows rises from its corpse and walks away, a milky, translucent ghost -- and the disjunction is unsettling. We can't quite believe we're seeing what we're seeing, and yet the spell we're under leaves no doubt.

Like "Blissfully Yours," "Tropical Malady" leaves the quotidian world behind midway through -- only what it plunges into is pure fable. The beginning of the film is the burgeoning love story between a soldier, Keng (Banlop Lomnoi), and a country boy, Tong (Sakda Kaewbuadee). Tong shyly resists Keng's declarations and shows of affection and Keng's request that Tong join him when he leaves for maneuvers in the country (out of shyness, you get the feeling; part of the idyllism here is that there's no proscription against being gay). We're simply watching the playfulness of two boys falling in love.

But when Keng leaves for duty, "Tropical Malady" turns into another movie. Storybook illustrations and titles relate the legend of a powerful shaman who can turn himself into a tiger. In the region where the soldier is stationed, there has been a disappearance and cows are turning up slaughtered. We, and eventually the soldier, see a naked boy (Sakda Kaewbuadee, who plays Tong in the movie's first half) running through the jungle, his body covered in faint stripes that suggest the stripes of a tiger. Eventually the soldier realizes this "tiger" has come to devour his soul.

Were "Tropical Malady" to be reduced to what it's saying, in the psychoanalytic manner that always cheapens art, it would seem trite, a fable of how desire reduces us to a primitive state. The movie is too strange and vivid an experience to be summed up in that way. The naturalistic story of a soldier on lone patrol devolves into a cursed fairy tale. Apichatpong said he wanted to create an "in-between-worlds mood" in this section.

It's a night world in which, like a tiger, we learn to see in the dark. Sometimes all we can make out of the soldier is the outline of his features limned by the moon. All we see of the forest is what the soldier's greenish flashlight beam picks out. And what gets under your skin is that even though we see only bits and pieces, the surroundings seem just as alive as they do in daylight scenes (part of that is thanks to the superb sound design by Akritchalerm Kalayanamitr). By the time that flashlight beam picks out a tiger looking down from a tree with a hungry, mournful lordliness, we have succumbed to the movie's dark enchantment.

It may be that audiences are comforted (or at least less maddened) by reducing the movie to a parable about the deforming nature of love. But "Tropical Malady," even fighting off the longheurs as it sometimes does, is a good example of how the power of a movie sometimes has only marginally to do with what it claims to be about. The movie may be too strange, too experimental, too slow to attract much of an audience when it opens here next year. Neither did "Last Life in the Universe," directed by Apichatpong's countryman Pen-ek Ratanaruang. Thailand, at least, should be proud that it has produced two of the best young filmmakers working.