In Arizona, influential Republican women are increasingly coming out for John Kerry. 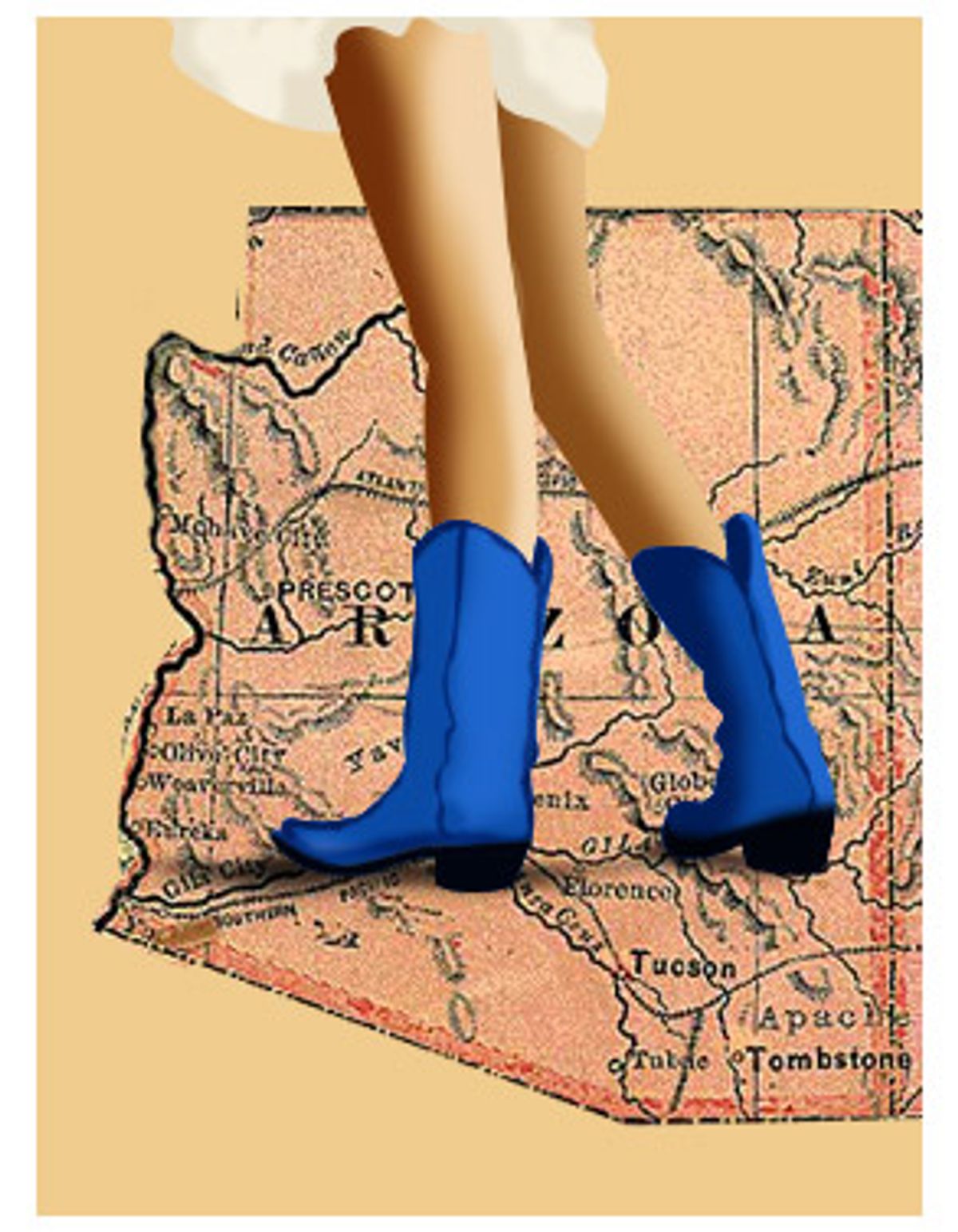 Judith Allen, longtime Arizonan and lifelong Republican, says her choice is clear. She is voting for John Kerry on Nov. 2 and says there are plenty more where she came from.

Allen is not a lone voice, crying in the wilderness. She currently serves as a volunteer coordinator for the group Republicans for Kerry, which believes in "putting aside partisan politics to do what is right for America." In spite of recent polls to the contrary, Allen says her fellow Republicans, turned off by the Bush administration's sharp turn to the right, are defecting in droves to the other side. If what these Arizonans want is any indication, Bush may well be in trouble. Since Arizona earned statehood in 1912, no Republican has been elected president without carrying the state.

Allen is also part of a brewing revolution of Republican women called the WISH List (Women in the Senate and House), a Washington-based organization committed to electing moderate, pro-choice Republican women to public office. WISH raises about $1 million a year to elect candidates and boasts a 75 percent success rate for the 1,400-plus candidates it has supported since 1992.

In the presidential election, says WISH national board member Deborah Carstens, the group stands firmly behind the Bush-Cheney campaign. Behind the official facade, though, is a different picture. "I've met and talked with numerous Republicans since I've been in this march for John Kerry," says Allen, now a senior adviser to Arizona's Kerry-Edwards campaign. "They have all echoed to me, 'I will vote for Kerry.'"

Allen, who served for 11 years as a clerk in Maricopa County's court system, says she was inspired to work for Kerry because she got tired of yelling at Bush on TV. She says that of the more than 700 cross-over Republicans she's spoken to in Arizona, many remain active in the GOP and reluctant to discuss their support for Kerry. Two WISH women corroborate this with Salon. When asked if they plan to vote, they say yes, then add emphatically, "but not for Bush," who won Arizona by just 6 percent in 2000.

Still, it's going to be an uphill battle for Kerry. Arizona is one of those pesky "purple" states. It has a Republican-leaning, albeit largely independent electorate that has been known to swing toward unpredictable places. Bill Clinton was the first Democrat to win Arizona since Harry S. Truman in 1948, and the GOP has a 120,000-voter advantage in party registration over the Democrats. Yet Arizona has a pool of about 600,000 registered Independents.

Although it is traditionally conservative, Arizona boasts a fiercely independent and occasionally progressive streak. It's the state that produced Barry Goldwater, the far right-winger who morphed into a maverick conservative, as well as the poster child for political independence, John McCain. In 1998, voters elected the "Fabulous Five," the country's first all-female line of succession: governor, secretary of state, attorney general, treasurer and superintendent of public instruction. These days, with its constant influx of new residents and Phoenix's recent designation as the country's fifth-largest city, Arizona's political landscape still is tough to categorize. But the last gubernatorial election signaled what many consider to be a powerful shift.

In 2002, the Republican Party pitted a far-right, pro-life conservative, Matt Salmon, against a moderate, pro-choice Democrat named Janet Napolitano. Napolitano, who was tough on crime and favored the death penalty while serving as the state's attorney general, won by only 1 percent or 11,819 votes to become the state's first elected Democratic governor in 20 years.

Scores of WISH women, it was learned after the election, had voted for Napolitano. In fact, some of them referred to themselves, unofficially, as "Republican Women for Janet," in a show of solidarity against the state's conservative Republican Party leadership. To many on the right, the women were defectors -- they have been both credited and criticized for helping Napolitano win the election, depending on which side of the aisle you're talking to -- but Gov. Napolitano calls them "rational deciders."

Bob Fannin, chairman of the state's Republican Party, doesn't buy it. "I just don't know whether that really happened," Fannin says. "I've heard the same stories. But I don't know how many women belonged to the WISH List." He says he doesn't know who did and who didn't vote for Napolitano.

Still, party hopping might become commonplace if the right wing doesn't start to make a move toward the center. Some WISH women, like Allen, are sparking a revolution, while others are trying to work from within to change their party. This conflict was clear at the group's third anniversary luncheon last summer at the Hilton Scottsdale Resort, when relatively few of the free "W Stands for Women" pins that were handed out were worn.

State Sen. Linda Binder, a Republican from Lake Havasu City and a WISH List member and candidate, sees a clear distinction between Bush and Kerry that's in line with WISH's sensibility. "I think Kerry is much more moderate [than Bush]," she says. "I don't think he's a liberal. I think that he understands about trying to govern from the middle. To me that's what you have to do."

Binder, who was born in London but has lived near the real London Bridge in Lake Havasu City for more than 20 years (and is a member of the London Bridge Republican Women's Club), believes many Republican women will vote for the Democratic ticket, even though it may be a reluctant, "rational decider" vote. "I don't think anybody will know until Election Day," she says in the British accent she still hasn't lost. "I've got a lot of friends who have been staunch Republicans that feel totally abandoned by this administration."

Binder, who claims she is still undecided, says the Kerry-Edwards ticket is the better choice for women. "The Republican Party has been so captured by the Christian Coalition and the right-to-lifers. They've just about destroyed women's rights and human rights. I would imagine from that perspective the Kerry-Edwards team is a lot more appealing."

Gov. Napolitano, who was named one of six Kerry debate advisors last month, agrees. "I definitely believe the Kerry ticket favors women on a whole host of issues," she says. "On the domestic side, with things like healthcare, child care and education, Kerry is much stronger."

Fannin counters that national security is priority No. 1 for women. "Most women that I talk to believe that we will have a safer place to live if we have a positive, decisive president," Fannin says. "They don't believe Senator Kerry would provide the kind of leadership that President Bush has on security issues." WISH's Carstens agrees. "Many soccer moms have morphed into security moms," she says, "and think security is probably the No. 1 issue."

"Are we safer today?" Judith Allen asks. "No." But that's not the only reason she's campaigning against Bush. Allen cites a laundry list of reasons why she and other Republicans are championing Kerry; since she joined the campaign in mid-July, her role in Republicans for Kerry has expanded rapidly. "It evolved because we had so many [Republican] people calling, saying, 'How can I get involved?' They knew I was a Republican and they felt comfortable talking to me. It's kind of like, 'It's all right. You have a friend.'"

One of Allen's new friends is Phoenix teacher Catherine Wyman. At the group's behest, Wyman, a registered Republican-cum-Kerry volunteer, paid to attend a recent luncheon in Phoenix in which Wade Sanders, a friend of Sen. Kerry's since the '60s who also commanded a Swift boat in Vietnam, spoke to a group of about 30 Democrats, Republicans and Independents. Sanders' stop in Phoenix was one of many during his tour of Arizona, in which he met with veterans, undecideds and Kerry supporters.

"I just don't think our country can survive four more years of George Bush," says Wyman, who flirted with the Libertarian Party for two years but remains registered with the GOP. "I think that the war in Iraq is nothing short of criminal. And I think that his unilateral decision to attack a sovereign nation, it just was horrible and played right into the hands of al-Qaida."

In Arizona, perhaps enough women agree with Wyman, Binder and Allen to render the Electoral College vote a horse race. "It depends on how tight the election is," says Robert Robb, veteran political columnist at the Arizona Republic. If only 1,000 Republican women switched sides, that would be more than the margin of victory in both New Mexico and Florida in 2000. However, Robb doesn't expect that enough Republicans -- of both genders -- will trade parties to turn Arizona blue. "I think Kerry made some ground in the debate on Thursday night," he says. "But I don't see what, short of a national landslide by Kerry, would change the election here."

Still, says Sue Walitsky, communications director for the Kerry-Edwards campaign in Arizona, Democrats haven't given up. "We have probably the strongest field operation that this state has even seen; strong in terms of number of people, resources, reach across the state. We are running a ground game here," she says. (The third presidential debate is scheduled to take place at Arizona State University on Oct. 13.)

So what's a moderate, pro-choice Republican woman to do? For her part, Allen believes it's a sign of maturity that enables voters to cross party lines. "I used to think, and I know many people do, you define yourself by your party," she says. "And since I have not been in [elected] office, I've realized, first, that I am an American. And I really don't want to be defined as a party because currently the party doesn't represent me."

Allen hasn't yet pulled a Teresa Heinz Kerry and registered as a Democrat. "I truly believe that I can help change this [Republican] party," she says. And she has some words of encouragement for Republicans who want to come out of the Kerry-Edwards closet. "It's OK," she says, "you can come forth and, honest to God, no one will shoot you."

Leigh Flayton is editor in chief of Arizona Monthly magazine.