It's the IQ, stupid 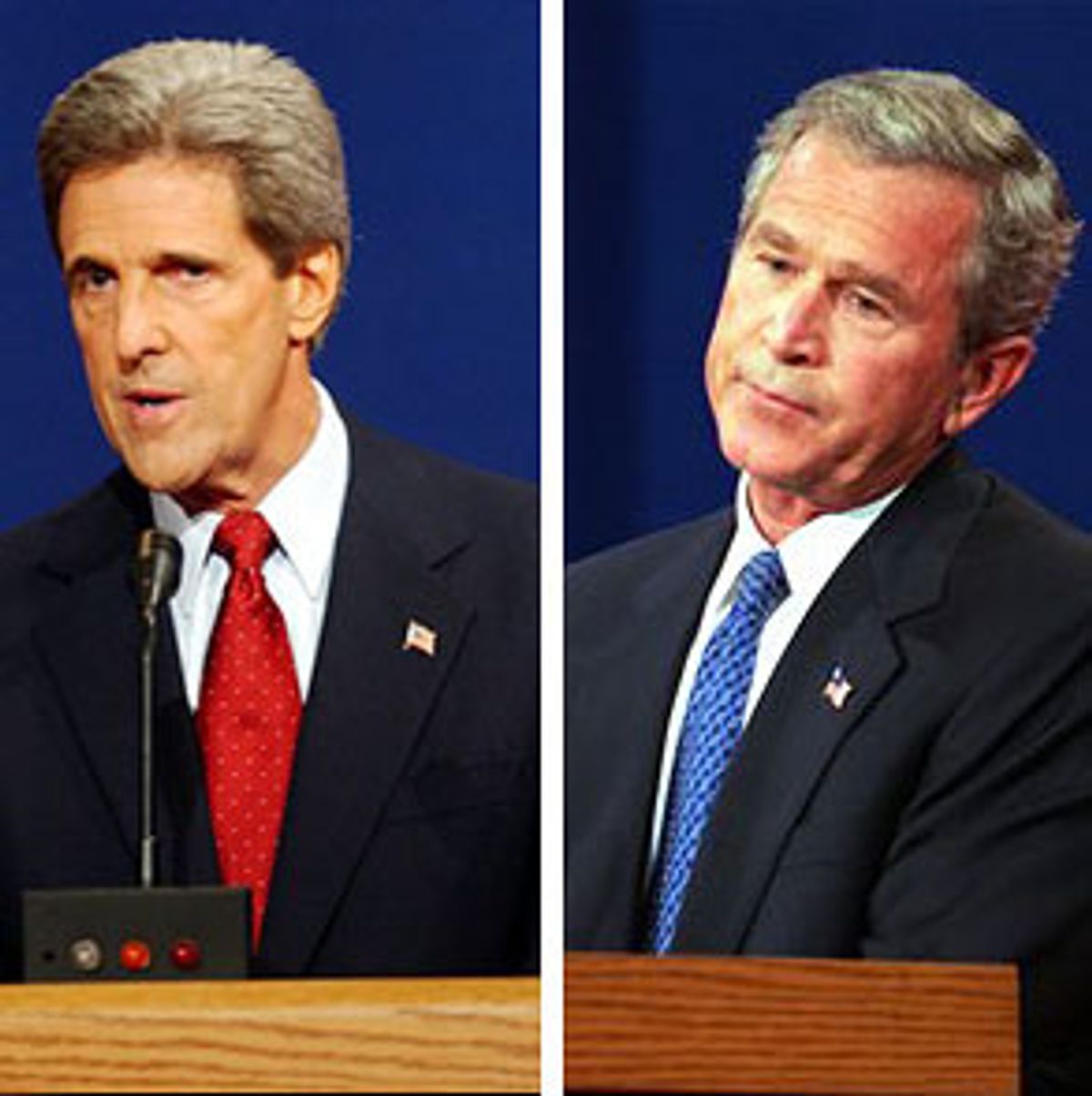 It happened slowly, and sometimes it seemed that it wasn't happening at all. Kerry opened in fits and starts. He answered moderator Jim Lehrer's first question with the sort of strong, clear, declarative sentence that seems to evade him -- Lehrer asked Kerry if he thought he could make America safer, and Kerry said, "Yes, I do" -- but then interrupted himself to offer expressions of gratitude to the hosts of the debate. Later, Kerry waited way too long to respond to Bush's "flip-flop" charge, and his first few swings at it were ineffective. "I believe in being strong and resolute and determined," Kerry said at one point. "We have to be steadfast and resolved, and I am," he said at another.

But as the night went on -- as Bush smirked and stumbled and even seemed to sigh -- Kerry hit his stride and found his strength. The moment came about half an hour in, when Lehrer asked Bush about his policy of preemptive war. Bush said he had "never dreamt" of starting a war before Sept. 11 -- "but the enemy attacked us, Jim."

Kerry was on it, and his response was devastating. "The president just said something extraordinarily revealing and frankly very important in this debate," Kerry said. "In answer to your question about Iraq and sending people into Iraq, he just said, 'The enemy attacked us.' Saddam Hussein didn't attack us. Osama bin Laden attacked us. Al-Qaida attacked us. And when we had Osama bin Laden cornered in the mountains of Tora Bora, 1,000 of his cohorts with him in those mountains, with the American military forces nearby and in the field, we didn't use the best trained troops in the world to go kill the world's number one criminal and terrorist ... That's the enemy that attacked us. That's the enemy that was allowed to walk out of those mountains."

Bush had no response, at least no intelligent one. "Of course I know Osama bin Laden attacked us," he said. "I know that." But it wasn't so clear sometimes that Bush did know that. Earlier in the debate, he had mixed up Saddam Hussein and Osama bin Laden and had to stop to correct himself.

It wasn't Bush's only low point. Bush's message discipline has served him well in this campaign -- every man, woman and child in America knows that John Kerry is a "flip-flopper" -- but Thursday night, message discipline looked like mindless repetition. Bush used the words "mixed signals" or "mixes messages" nearly a dozen times, and it seemed like a lot more. He accused Kerry of changing positions eight times. And he complained seven times about Kerry's calling Iraq "the wrong war at the wrong time."

Again and again, Bush jumped on the end of Kerry's answers, asking Lehrer for time to respond, then found himself with nothing to say. The president sputtered, stared off into the distance -- invoking nothing more than that footage of him listening to "The Pet Goat" -- then inevitably returned to the riff he repeated all night long. In case you hadn't heard, Kerry changes his positions and sends "mixed messages."

And when Kerry turned the tables on Bush -- when he challenged him on Iraq or North Korea -- Bush seemed to have little to say beyond his first line of defense. The president seemed either unwilling or unable to deal with the tragedy of Iraq. On a day when 41 Iraqis were killed in car bombings -- 34 of them children getting candy from U.S. troops -- Bush said nothing at all about the suffering of the Iraqi people. He described Iraq in the way that some people talk of losing weight: "It's hard work."

It's really hard work, so hard that Bush used the phrase 11 times. And Bush said he understands it's hard. "I get the casualty reports every day," he said. "I see on the TV screens how hard it is." Bush seemed to save himself from the emotion-free zone a few minutes later, when he got choked up talking about his meeting with a woman who had lost her husband in Iraq. But then he bungled it with another "hard work" and a little Bushism to boot. "You know," he said, "it's hard work to try to love her as best as I can, knowing full well that the decision I made caused her loved one to be in harm's way."

But it wasn't Bush's stumbles that mattered Thursday night. Bush has bumbled and fumbled in a million other speeches and press conferences and interviews, and it hasn't done a thing to undercut his support with his half of the electorate. People -- some people -- even find it endearing.

What mattered Thursday was Kerry's performance. Kerry had the chance to share the stage with the president, and he had to look like he belonged there. Just before the debate, Kerry advisor Mike McCurry acknowledged that voters "don't put Kerry in the context right now of commander in chief." McCurry wrote it off to the "usual life cycle" of a presidential election, but it was more than that. Whether in the caricature the Republicans have drawn for him or in his own meandering style, Kerry had failed to come across as fully presidential. When he'd say something like, "When I'm president," it seemed, well, off.

In the run-up to the debate, it was unclear that Kerry would be able to change that. First, Matt Drudge and Lynne Cheney suggested that Kerry had taken on some kind of artificial orangey glow. Then, on "Good Morning America" Wednesday morning, Kerry flubbed a question he should have been ready to nail. Asked about his infamous "I actually voted for the $87 billion before I voted against it" comment, Kerry said he'd made it in "one of those inarticulate moments late in the evening when I was dead tired." Kerry was wrong; he'd made the comment early one afternoon.

And Thursday, the Kerry campaign managed to get into a spat over the timing lights. The two campaigns had agreed that the lights would be visible to the television audience; the Kerry campaign hadn't contemplated that they'd be mounted on the lecterns. In the view of reporters, Mike McCurry and a team of Kerry aides fought it out with a handful of Bush advisors. The lights stayed, and Kerry looked both hyper-technical and weak for raising the issue.

But all that disappeared as Kerry found his stride -- his presidential style -- Thursday night. As Bush got angry, Kerry got stronger. With Bush deep in heavy-repetition mode on North Korea and Iran, Kerry stepped back and explained the crises in the two countries calmly, methodically and with a confidence that came from knowledge. And somehow, he did it without devolving into Gore-ian condescension. While Kerry didn't score any ha-ha one-liners -- it's not his style, and he looks goofy when he tries -- he nailed Bush a couple of times with simple, clear condemnations. Going after Bush's budget priorities, Kerry said: "We didn't need that tax cut. America needed to be safe."

Kerry advisor Tad Devine said that Kerry "looked and acted like a president," that he had counteracted in 90 minutes the $150 million in Republican advertising. While Karl Rove would never go that far, he clearly understood that John Kerry had kept himself in -- or put himself back in -- the race Thursday night. "This is going to be a close, hard-fought race right down to the end," a subdued Rove told Salon. "I think people are going to look at each one of these and sort of draw an opinion from each one. There's going to be very little movement one way or the other."

That's not so clear. While polling in the presidential race won't be available for a few days, the networks' instant polls held considerable promise for Kerry. CNN polled 615 registered voters right after the debate; they said Kerry won, 53-37. And the pundits seem to be on board, too. All through the day, Kerry's team talked of the importance of the post-debate spin, a lesson learned four years ago when Gore won the debate but lost in the war of the talking heads. But by the time Team Kerry rolled into Spin Alley, their candidate had made their job easy. Devine pronounced Kerry's debate as "the best wire-to-wire performance I've ever seen in a debate." Even John McCain, on hand as a Bush surrogate, conceded that Kerry had done a good job.

Karl Rove and the Republicans will certainly fire back Friday. They'll call Kerry on a factual flub or two -- when Kerry said he'd never called Bush a liar, you knew that the Republicans would find a time that he did, and they did -- and they'll get back on their flip-flop talking points. But for one night, at least, John Kerry has taken control.