People have the power

Bruce Springsteen, REM and friends kick off the Vote for Change tour with a night of passion and inspiration. 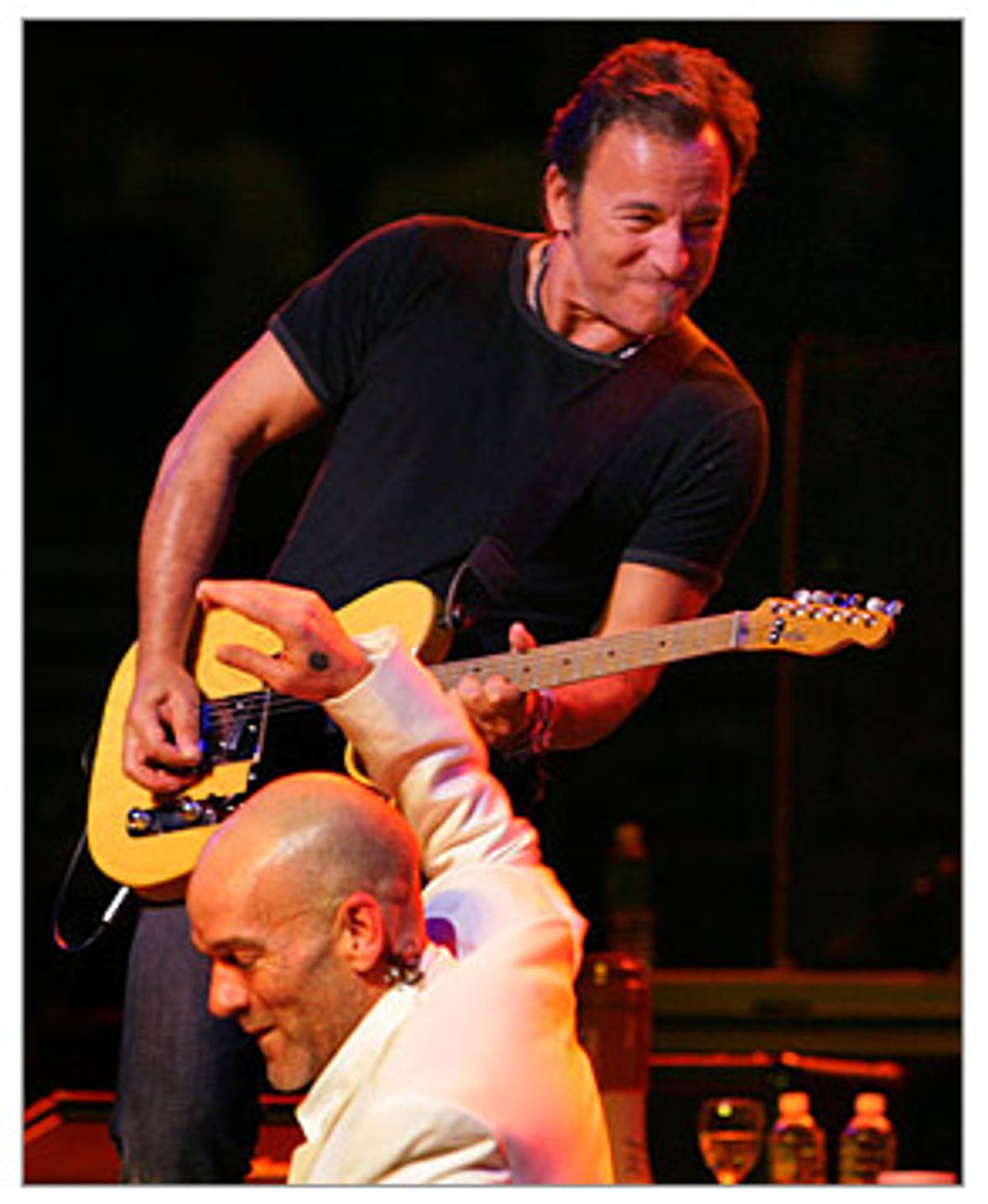 Hunched over a 12-string acoustic guitar, standing in the lone spotlight of an otherwise darkened Wachovia Center in Philadelphia Friday night, Bruce Springsteen began his tour sprint to help unseat President Bush with a bluesy, instrumental version of the Star Spangled Banner. America is not always right -- thats a fairy tale you tell your children, Springsteen later commented from the stage. But America is always true. And its in seeking this truth that we find a deeper patriotism. Remember, the country we carry in our hearts is waiting.

It was that sense of determined optimism -- a positive message of empowerment -- that drove the opening night of the unprecedented, all-star Vote for Change tour. On Friday night, Springsteen and his E Street Band were joined by REM, John Fogerty and the young band Bright Eyes for a memorable concert of inspiring American rock classics, bound together by a newfound call to activism.

The Vote for Change tours, featuring six separate traveling bills, include Pearl Jam, the Dixie Chicks, Jackson Browne, Bonnie Raitt, John Mellencamp and others. They will play 37 shows in 30 cities in swing states such as Ohio, Michigan, North Carolina, Florida, Minnesota, Wisconsin, Iowa, Missouri, Washington and Arizona. Proceeds go to ACT (America Coming Together), a group raising money for Democratic candidates. The tour concludes in Washington on Oct. 11 with 13 of the headliners and will be televised on the Sundance cable channel.

On Friday night in Philadelphia, talk of politics was relatively subdued. There was no Bush-bashing and Sen. John Kerrys name was mentioned only once from the stage by Springsteen. (REMs Michael Stipe wore a Kerry T-shirt for the encore.) Sharply political comments aired in taped interviews by Vote for Change artists played between performances. Pearl Jams Eddie Vedder said of the Bush administration, They went out of their way to lie to the American people.

Early on, Stipe told fans from the stage, This is a very important moment for every one of us and for our country. Several times during the night, Springsteen talked about the need for a new progressive government, for an administration that was open, rational, and forward-looking.

But any Kerry supporters coming to the show expecting a banner-waving pep rally were probably disappointed. Organizers have said the Vote for Change shows are meant to be respectful. And artists are being careful not to give Republicans any ammunition to criticize them for questionable rhetoric, as Republicans did this summer when Whoopi Goldberg made a crude pun on Bushs name during a Kerry celebrity fundraiser at Radio City Music Hall.

That said, given how barren the political landscape has been among pop stars for the past 10 years, how strangely silent so many of them have remained as tumultuous, national events often came and went without comment, Vote for Changes embrace of a political identity constitutes a remarkable breakthrough.

Introduced by Springsteen as one of the great American rock bands, REM turned in a spirited, 50-minute, 10-song set. Opening with, The One I Love, REM faced the thankless task of not only acting as Springsteens de facto opening act (normally, he never employs one) but doing it in the singers backyard of Philadelphia. But with Michael Stipe out front, REM is rarely in danger of losing a crowd. Dressed in a white suit, white shirt, white shoes, sporting a shaved head and looking more and more like John Malkovich every day, Stipe remains one of rocks great crooners. Hes what every band craves: a dynamic presence you cant take your eyes off of.

This is REM and this is what we do, Stipe announced, never even bothering to plug the groups new CD, Around the Sun, which arrives in stores on Tuesday. For most of the set, the band leaned on recent material, such as 2003s Final Straw, released the week the United States declared war on Iraq, and Bad Day, another 2003 release that already sounds like an REM classic. The band also dug out the seldom-performed World Leader Pretend and then drilled for gold on the wonderfully raucous She Just Wants to Be.

Stipe told the audience that sharing the stage with Springsteen and the E Street Band was a fucking unbelievable honor. He then invited Springsteen onstage to join the band on Man on the Moon. As Stipe and Springsteen traded verses, paying an ode to late, demented comedian Andy Kaufman, and singing choruses about astronauts, the giddy crowd went bonkers.

After mentioning Kerrys triumph in Thursdays debate (I think were on a roll), Springsteen uncorked a full-throttled version of Johnny 99, complete with fiddle break. His 19-song show was not entirely seamless, though. Because of the multiple-act bill, the set was roughly 50 minutes shorter than usual and at times the band seemed to wrestle with finding its rhythm. And why Springsteen continues to resuscitate the plodding Youngstown in concert remains a riddle.

The second half of the show was dominated by collaborations. Fogerty, whose 60s band Creedence Clearwater Revival helped define American rock with its sharp, economical classic songs, joined Springsteen for Centerfield, his jubilant ode to redemption via the ballpark. Like the earlier version of Man on the Moon, the moment was pure joy; nothing to do with politics and everything to do with having fun with bass, guitar and drums.

Things turned sober as Fogerty sang his new antiwar single, Dija Vu (All Over Again): Day by day we count the dead and dying/ Ship the bodies home while the networks all keep score. But when Fogerty stalked the edge of the stage, unveiled the telltale chords to Fortunate Son and growled the opening lines -- Some folks are born/ Made to wave the flag/ Oooh, theyre red, white and blue -- the mood in Philly became electric. When he sang the chorus about being a guy sent to war because I aint no millionaires son, the reference was lost on no one.

Fogerty penned Fortunate Son 35 years ago, sitting on the edge of a bed with a legal pad in his lap. Its a confrontation between me and Richard Nixon, he once said. Friday it served as a biting indictment of Bush. (In recent weeks, the Democratic National Committee, raising questions about Bushs National Guard service during the Vietnam War, even began referring to the president as a Fortunate Son.)

After Fogerty and Springsteen traded vocals on The Promised Land (Blow away the lies that leave you nothing but lost and brokenhearted), Stipe returned to the stage to tackle Because the Night, the Springsteen song that Patti Smith turned into a hit. Stipe devoured the vocals while Springsteen ripped the cover off the guitar solo. During the beach party vibe of Marys Place, Springsteen muttered, Im out of practice, moments before the 55-year-old got up a head of steam, sprinted across the front of the stage and flopped to his knees in trademark style, sliding 20 feet.

Following what Springsteen called his public service announcement about a deeper patriotism, REM guitarist Peter Buck and bassist Mike Mills joined the E Street Band for Born to Run. During the '80s, REM rose to fame as the face of college radio, the smart band that purposefully avoided larger-than-life rock epics. But with the Wachovia Center house lights up throughout Born to Run, Mills could barely contain his glee. REM has played and probably sold out every major concert arena in America. But as Mills saddled up to Springsteen in anticipation of the songs famous 1,2,3,4 count-off, and 22,000 Bruce faithful erupted, its possible the REM bassist had never experienced a phenomenon quite like it before.

Back came Fogerty for a full-on run-through of Proud Mary. Whenever he fronted the mighty E Street Band, Fogerty had the look of a teenager who was just given the keys to a Cadillac Escalade and was taking it out for a joy ride. But he was so caught up in the excitement that on the second verse of Proud Mary he missed a vocal cue on a song hes no doubt sung a thousand times.

For the finale, the entire lineup emptied onto the stage and unleashed diesel-powered, 16-person versions of Nick Lowes Peace, Love and Understanding and Patti Smiths modern-day call to arms, People Have the Power.

For the next week, Vote for Change will try to spread that power, one encore at a time.