The future won't be defined by East vs. West or Christian vs. Muslim. As Michael Klare's new book, "Blood and Oil," shows, it's all about who has, and who wants, the black gold. 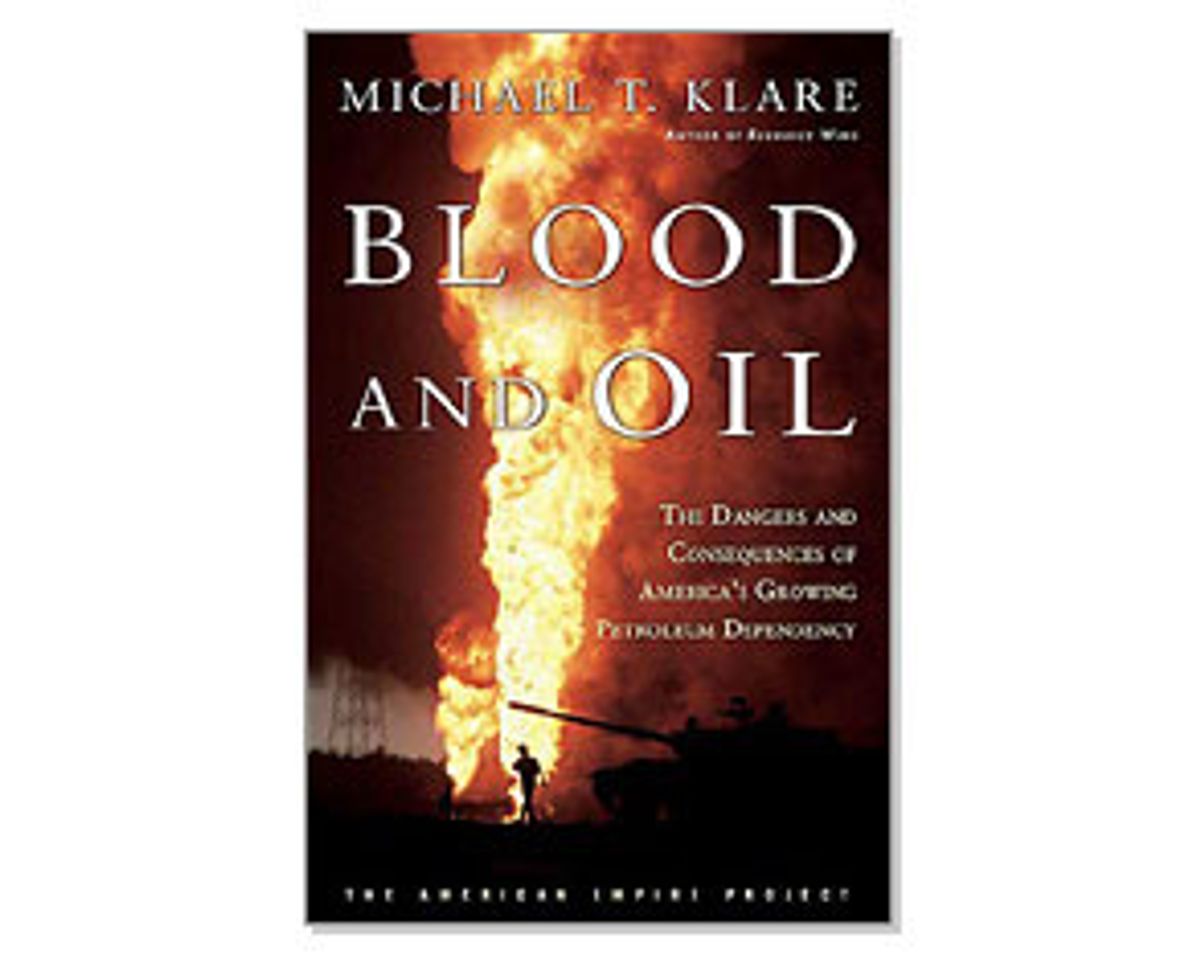 Of all the misinformation, spin and outright falsehoods that the Bush administration has perpetrated with regard to the war in Iraq, there is no more hair-pullingly outrageous, flat-out preposterous assertion than that the invasion had nothing to do with oil.

This is wrong on so many levels that one hardly knows where to start -- even if, for argument's sake, one dismisses as conspiracy theory the claim that the U.S. invasion was directly aimed at getting control of Iraqi oil fields, and accepts the dubious assertion that by removing Hussein, the Bush administration struck a blow against terrorism.

What inspired al-Qaida's attack on the United States in the first place? Was it not Osama bin Laden's outrage at the stationing of American soldiers in Saudi Arabia? And weren't those soldiers there to protect Saudi Arabian and Kuwaiti oil fields from Iraqi aggression? So even by the disingenuous logic of the Bush administration, which continues to claim, against all evidence, that Saddam Hussein had strong links with al-Qaida, the struggle for control over oil fields in the Middle East is the root cause of today's conflict.

Such has been the case since at least as far back as the Roosevelt administration, as Michael T. Klare calmly and inexorably explains in "Blood and Oil: The Dangers and Consequences of America's Growing Dependency on Imported Petroleum," and such will be the case for the foreseeable future, unless U.S. leaders make vast changes in current energy policy. Every American president since then has made the issue of U.S. access to Persian Gulf oil a priority -- a priority that has put the nation in bed with corrupt, anti-democratic rulers, infuriated rank-and-file Arabs, and entailed military commitments that result in the deaths of American fighting men and women.

And it's only going to get worse, writes Klare. Worldwide demand for oil will continue to rise as supply tightens. As a consequence, bloody and deadly conflicts, not just in the Persian Gulf but everywhere there are significant reserves of oil, will continue to rage.

What are we going to do about it? After outlining the danger the United States is currently in -- foreign oil imports now account for more than 50 percent of total U.S. consumption, and that percentage is only going to rise -- Klare calls for a comprehensive reworking of national energy policy. Getting out of the oil dependency trap will require conservation, investment in renewable energy, and fundamental reworking of land use, zoning and public transportation priorities.

It's a big job, and one quails at the prospect of any such national initiative making headway in a land as addicted to cheap energy as the United States. But one way or another, change is going to come -- the only real question is whether political leaders and individual Americans have the gumption and foresight to get ahead of the problem, or whether the global economic meltdown that will result from worldwide war over energy resources makes our choices for us.

Does that sound too apocalyptic? Too scare-mongering? Too sky-is-falling? So be it. If history teaches us anything, it is that the struggle over resources is one of the most enduringly bloody occupations of humans on this planet. Oil is the most precious such resource today. And so we will continue to bleed.

Michael Klare is the defense correspondent for the Nation. As such, one would expect a pretty solid left-wing approach to issues of global politics and energy resource management. But for the most part, "Blood and Oil" is an exercise in pragmatism, not ideology -- a sober analysis of troop movements, international diplomacy and energy-resource allocation.

There is one point, near the end, however, where readers might shake their heads at what appears to be a head-in-the-clouds approach to solving the current dilemma.

As a first step in coming up with a new energy policy, Klare argues that the United States needs to cut off its support of all undemocratic regimes, and to make it clear that there will be no more quid-pro-quo arrangements that trade weapon systems and defense commitments in return for access to oil. "The United States must no longer agree to help defend any foreign state or regime as a condition of access to oil." Then, as a next step, Klare calls for increasing investment in alternative sources of energy and public transport, and a commitment to energy conservation.

Given the circumstances that Klare so compellingly outlines -- U.S. dependence on foreign oil imports, increasing scarcity of resources, and ever-more-intense competition all over the globe for those resources -- it stretches credulity that U.S. leaders are going to suddenly start conducting foreign policy based on moral imperatives. It is very difficult to see how the United States can extricate itself from the Persian Gulf or anywhere else, without already having secured some measure of energy independence, whether that be by suddenly becoming a nation of bicycling, air-conditioning-eschewing ascetics, or by virtue of technological breakthroughs leading to new sources of energy production (hydrogen, cold fusion, etc.) Unilaterally disengaging from all the tin-pot dictators and corrupt regimes that the U.S. is propping up over the globe would make Americans feel morally superior for about a minute, and then the outrage over gas prices spiking to 10 bucks a gallon would result in the speedy removal of whatever leaders had the guts to make such a move.

But that's really the only point in "Blood and Oil" where one feels that a political point of view is interfering with a cold assessment of reality. The great bulk of "Blood and Oil" dispassionately lays out, step by step and barrel by barrel, how American military and strategic priorities all over the globe are predicated on the principle that access to energy resources is a fundamental issue of national security.

The great tragedy of this, as Klare observes, is that American support of anti-democratic regimes, particularly in the Middle East, is a clear root cause of anti-American sentiment, and thus, terrorism. The inseparability of terrorist activity and the struggle for oil is manifest. Perhaps Klare's most valuable point is that the defining conflict of our times is not, in Samuel Huntington's phrase, a "clash of civilizations" between worldviews and values, but is instead the much more basic struggle to decide who gets the oil.

So where does that leave us? The U.S. can't unilaterally abandon its support of, say, the Saudi ruling family without causing massive economic disruption domestically. But its very support of the Saudis is a root cause of terrorism. And even if the invasion of Iraq was designed to bring Iraqi oil fields under U.S. control, not only would the added oil not solve the problem of future demand but, as is painfully clear, that war is only succeeding in breeding more terrorism.

The only way out, then, would appear to be to subsidize massive investment in renewable energy and conservation. The current presidential administration, staffed largely by representatives of Big Oil, will never take that step. It's also easy to have doubts as to whether a Kerry administration will have the will to make the changes necessary. Still, one can dream -- if the $120 billion spent on the Iraq war had been spent on light rail and bike paths and subsidizing research into hydrogen fuel cells and encouraging Detroit car manufacturers to upgrade fuel efficiency, wouldn't we all be able to sleep a little bit easier?