Forget about terrorism -- the true enemy is American dependence on energy resources in unstable foreign countries. 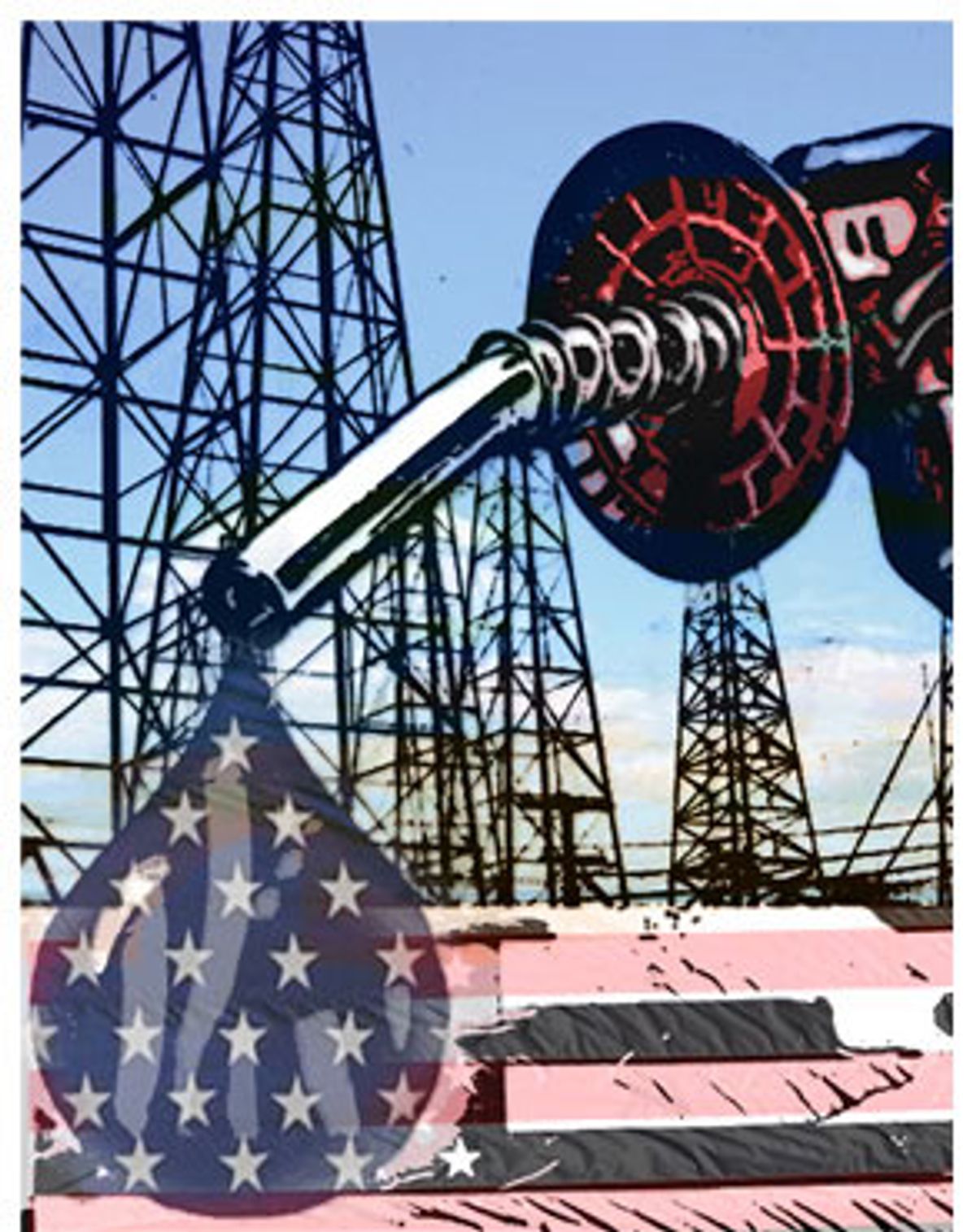 As the presidential campaign draws to a close, the two major candidates are sparring over many aspects of American foreign policy -- notably Iraq, the war on terrorism, and America's fraying ties with other major powers. But there is one critical topic that both are refusing to confront frankly: America's growing dependence on imported petroleum.

Rising oil dependency has many serious consequences for the United States. To begin with, it entails a mammoth transfer of national wealth to foreign oil producers: nearly $200 billion per year at current prices. These transfers represent the single largest contribution to our staggering balance-of-payments deficit and are steadily eroding the value of the dollar. Growing dependency also compels us to coddle foreign oil potentates like the royal family of Saudi Arabia -- some of whose members made lavish donations to Islamic charities linked to Osama bin Laden and al-Qaida. Worst of all, our dependence renders us highly vulnerable to oil shocks caused by turmoil and conflict in the major producing areas abroad.

These are not new concerns. The United States has been exposed to the fallout of rising oil dependency for some time. But the severity of the problem has become more pronounced over the past few years. As the United States has deepened its reliance on imported petroleum, the center of gravity of world oil production has shifted inexorably from established producers in the industrialized world to emerging suppliers in the Middle East, Africa, and the Andean region of Latin America -- war zones all. The further we look into the future, therefore, the greater the risk of international oil crises.

Given the high stakes involved, oil dependency should be among the top issues discussed in the campaign. Both major candidates should be offering detailed plans for reducing our reliance on imports and developing alternative sources of energy. And, to be fair, both have made token statements in this direction: Sen. Kerry has called for greater spending on petroleum alternatives, while President Bush has touted his plan to promote energy "independence" by drilling in Alaska and other protected wilderness areas. But neither candidate has been willing to face the fact that American dependence on imported oil will continue to grow unless we adopt far more ambitious plans of conservation and changes in technology.

The reluctance to contemplate such moves is understandable. The American economy is deeply dependent on cheap and abundant petroleum, and more and more of that energy must be acquired from foreign suppliers. Even if Alaska's Arctic National Wildlife Refuge actually contains all the oil it is said to possess -- about 10 billion barrels -- we would still be dependent on imports for an ever-growing share of our energy needs. Even the production of more hybrid vehicles will not make a real dent in our foreign oil consumption, so long as most Americans continue to drive the relatively inefficient vehicles now on the road. As things stand now, we are destined to be even more beholden to foreign producers in the future than we are at present.

The fact that we have become so dependent on imported oil is scary enough. But what is truly frightening is that an ever-increasing share of our imported energy will come from countries that are chronically unstable, torn by ethnic and religious conflict, or house anti-American terrorists -- or some combination of all three. The ever-turbulent Middle East harbors 65 percent of the world's known oil reserves, while producers in Africa, Latin America and Asia possess another 20 percent. These countries or their self-appointed rulers may want to sell us their petroleum, but they lack the capacity to maintain stability in their own territory and so cannot always guarantee a safe and reliable stream of crude. As a result, supplies are curtailed, prices rise and the global economy is at risk of a slowdown or contraction -- precisely the conditions we face today.

This is not a temporary worry. We may get past the current upheavals in Iraq, Nigeria and Venezuela and see lower energy prices in the year ahead. But even if these key suppliers settle down a bit, others -- Iran, Saudi Arabia, Angola, Azerbaijan -- are likely to become more restive. There simply is no escape from oil-supply disruptions and the resulting economic traumas produced by instability in producing regions abroad.

The propensity toward violence in these areas is partly a result of the historic antagonisms that plague many of these countries -- Shiites versus Sunnis, Arabs versus Persians, Muslims versus Christians and so on. Even without petroleum, these countries would be subject to periodic upheavals. But the discovery and production of oil tends to exacerbate these differences, bringing immense wealth to some and disappointment to others -- a sure source of conflict. In Nigeria, for example, the dominant tribes of the north have largely monopolized the allocation of national oil revenues, while the marginalized tribes of the south -- where most of the oil is produced -- have been excluded from these benefits. The unsurprising result: tribes in the south are threatening civil war and a costly oil-production shutdown unless the government channels more petroleum wealth to their impoverished communities.

But this is only part of the problem. Many of these countries were once occupied or controlled by the major colonial powers, and so harbor deep resentments toward any remnant or reminder of colonialism. As the leading Western power, the United States has become a magnet for much of this wrath. And because the most visible expressions of American involvement in these countries are the large U.S.-based energy firms, anything to do with oil -- pipelines, pumping stations, refineries, tankers and so on -- becomes a legitimate target of attack. The lethal threat from terrorism, therefore, cannot be separated from our reliance on foreign oil. American leaders are not unaware of this danger. Months before Sept. 11, 2001, President Bush warned of the dangers associated with growing U.S. dependence on imports from the developing world. "If we fail to act," he declared on May 17 of that year, "our country will become more reliant on foreign crude oil, putting our national energy security into the hands of foreign nations, some of whom do not share our interests." The logical response, of course, would have been to take swift action to diminish America's dependence on imports. But this would have required a substantial reduction in our consumption of oil and a dramatic improvement in the fuel efficiency of American automobiles -- steps that Bush was clearly unwilling to take, presumably because this would jeopardize the profits of his friends and associates in the petroleum industry. As a result, we are far more dependent on imported oil today than we were in 2001.

It follows that efforts to substantially reduce America's oil dependency will prove far more difficult in 2005 and the years thereafter than they would have been if we had started down this path in 2001. For example, if we had imposed significant fuel-efficiency requirements for cars and SUVs in 2001, we would now be saving a million or more barrels of oil per day; instead, overall fleet efficiency actually declined over this period, and so we are that much further behind the curve. To catch up with where we might have been had we moved sooner will require far more stringent requirements in the years ahead -- and it is this awesome prospect that has deterred the major candidates from raising the oil issue in a meaningful way. They may pay lip service to the perils of dependency, but are unwilling to advocate the decisive steps that are required to make a meaningful difference. Kerry is more outspoken on this issue than Bush -- he has proposed a $10 billion fund to promote new automobile technology and other energy innovations -- but has not called for mandatory increases in automobile fuel efficiency, the only sure way to reduce net petroleum dependency.

With crude oil fetching a record $50 per barrel and prices rising at the pump, Bush and Kerry are both likely to promise vigorous action to resolve the crisis. Both will also tout their respective solutions to dependency: drilling in ANWR in Bush's case, accelerated development of new technologies in Kerry's. But neither will acknowledge the magnitude of the problem or offer the sort of remedies that can really make a difference. The dependency dilemma will intensify, therefore, and we can expect bigger oil shocks in the years ahead. Environmentalists will, of course, keep pushing for tougher action, but we may have to wait for a truly massive crisis -- entailing a global economic meltdown -- before our leaders give this issue the attention it deserves.