Forget about that nasty oil or radioactive nuclear waste: If you want to breathe fresh air, says the coal industry, burn, baby, burn! 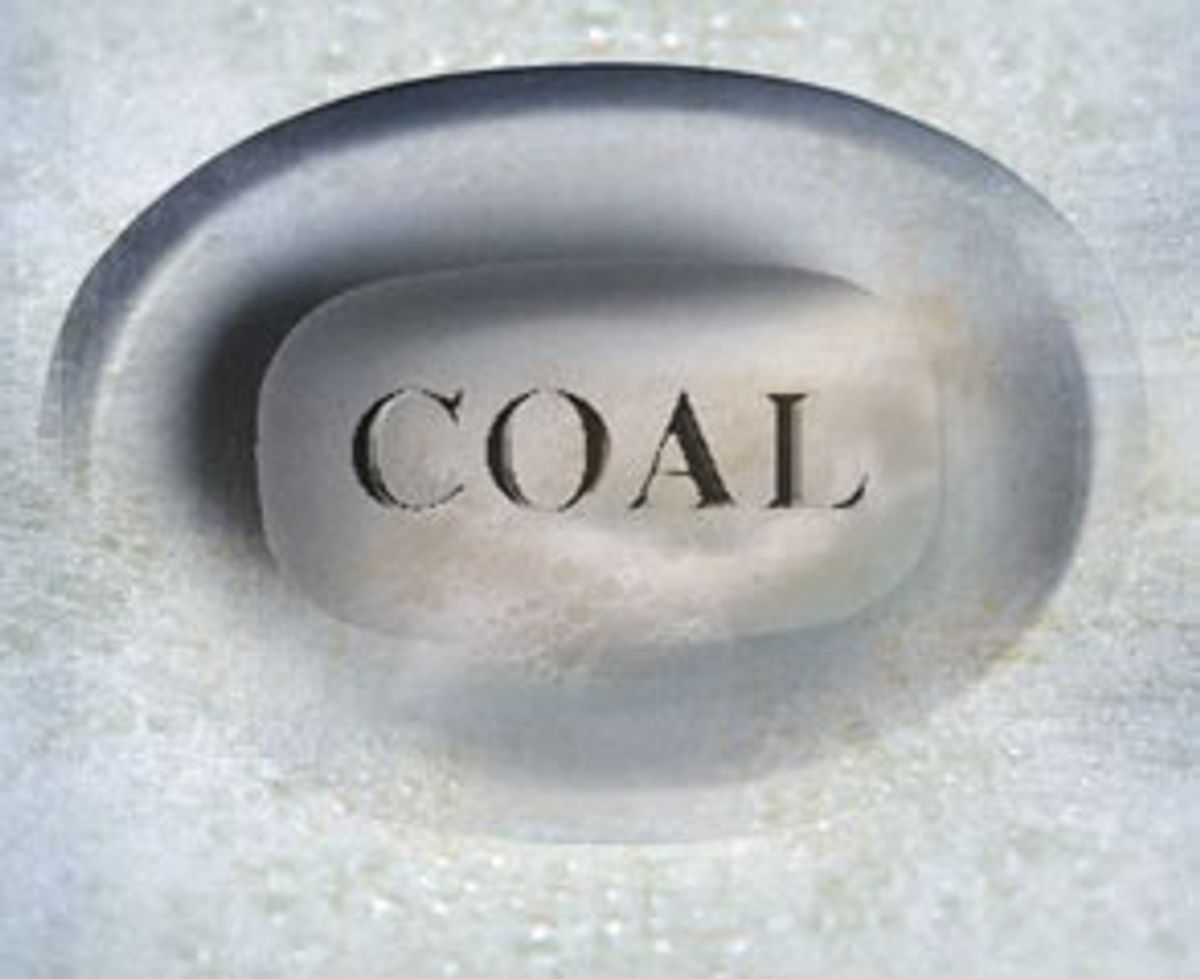 The 30-second TV ad opens with a bald eagle struggling to fly through a smoggy sky. The year is 1970, and the location is a mountain in North America. But wherever this range supposedly is, you would have to wear a gas mask to hike it.

After a few seconds of flapping through the soot, the wheezing eagle gives up, crash-landing on a rock. With a deep cough, like a smoker who has been puffing away for decades, the eagle sputters: "Not a good day for flyin'."

Cut to the next scene; the year is 2004, and the bald eagle is floating above the same mountains. But now the sky is bright blue, dotted with puffy white clouds. The eagle soars, true and proud -- God bless America!

Is this a self-satisfied broadside from environmentalists celebrating the Clean Air Act? Not at all. The free-flying eagle is bringing happy tidings from a group called Americans for Balanced Energy Choices, a 5-year-old nonprofit funded by the coal, rail and power industries. ABEC's primary purpose, apparently, is to promote the notion that coal is, as its Web site declares, not only "affordable" but also "increasingly clean."

A voice-over in the rehabilitated-eagle ad intones: "Thanks in part to clean coal technologies, our air quality has been improving. And by 2015 emissions from coal-based power plants will be 75 percent less than they were in 1970."

The claim doesn't sit well with environmentalists. "What emissions are they talking about? Clearly, they're not talking about CO2 [carbon dioxide] -- there's no question," says Aimee Christensen, executive director of Environment 2004, a political group dedicated to exposing the Bush administration's anti-environmental record. Under Bush, the Environmental Protection Agency has refused to regulate carbon dioxide as a pollutant, even though emissions of CO2 have been closely linked by scientists to global warming, and coal-fired power plants are significant producers of CO2.

No Americans for Balanced Energy Choices would return calls for this article, but the eagle spot, which has been broadcast on CNN, can be seen on the Web here. It's the latest salvo in the industry group's ongoing campaign to promote "clean coal" as a cheap and increasingly green electricity source for the future.

Environmental and corporate watchdog groups have taken pains to debunk the nonprofit front group's trumped-up "Don't worry, love coal" claims, but in an election year where coal-loving swing states such as West Virginia and Pennsylvania are very much in play, both presidential candidates have embraced the "clean coal" mantra. That's easy enough for them to do even if their positions on global warming differ, because "clean coal" is one of those catchphrases that mean less the closer you look at them. Ultimately, "clean coal" is an umbrella term for many technologies, everything from widely available scrubbers that reduce sulfur dioxide, which causes acid rain, to cutting-edge carbon-sequestration technologies that hold out the hope of capturing greenhouse gases and storing them under the earth in vast geologic reserves.

With access to energy resources now synonymous with national security, it's not hard to see why King Coal has taken its new spin. "When oil prices started spiking, they started calling themselves domestic, secure energy. They're making people think about coal as a safer alternative to oil and natural gas," says Kert Davies, research director for Greenpeace.

With oil at $50 a barrel, and natural gas prices on the rise, look for more feel-good coal messages. But no matter how high that eagle flies, don't expect it to escape the consequences of global warming anytime soon, no matter how squeaky clean the coal industry claims to be.

For the Bush administration, the promise of true "clean coal" is remarkably similar to the promise of the hydrogen fuel-cell car -- a tantalizing technological fix that's decades off, so one can endorse it happily and continue merrily polluting in the present. So the administration continues to promote its FutureGen Initiative, a research project to create a power plant that generates electricity and hydrogen while generating no emissions, including CO2, which would be captured and trapped under the ground.

"You can burn coal with basically no CO2 emissions if you want to spend enough money," says David Keith, an engineering professor at the University of Calgary who works on carbon sequestration.

Oil companies have long pumped carbon dioxide back into the ground, as one way of ferreting more oil out of depleted oil wells. Norway, where there has been a federal tax on CO2 emissions since 1991, has been a pioneer in implementing this technique: capturing the CO2 emissions from burning coal and stashing them under the North Sea seabed. But when it comes to sequestering CO2 emissions from coal-fired power plants in the United States, there is simply no regulatory incentive for companies to bother. Those circumstances would be different if the United States had signed the Kyoto Protocol, which does provide economic incentives for carbon sequestration, but for the present, why bother to spend the money to try to capture carbon dioxide when you can just freely spew it into the air?

Scientists also still have concerns about whether the captured and stored carbon dioxide will leak, defeating the original purpose. "It's not an explosion hazard," says John Galloway, a senior energy analyst for the Union of Concerned Scientists. "It's just that the energy that you used to clean up the fuel and put the carbon in the ground is wasted, because it comes back out of the ground, and you've accomplished nothing."

Bush has promoted the promise of carbon sequestration in speeches, but under his administration, the New Source Review amendment to the Clean Air Act has been gutted, allowing the oldest, dirtiest coal-fired power plants to operate longer; Clinton-era regulations on mercury pollution have been scaled back; and efforts to regulate CO2 emissions have gone nowhere.

Even the vaunted FutureGen no-emissions power plant project has been underfunded: "This is the centerpiece of Bush's program for cleaning up the environmental performance of energy, but he's actually not making it a budgetary priority," says Bracken Hendricks, executive director of the Apollo Alliance, a coalition of labor and environmental groups that includes miners and that agitates for the United States to invest in renewable energy as a way to create high-paying jobs. "He's never asked for full funding for the program, and each year his request to Congress for the program has declined. In the most recent appropriation, he requested a quarter of the promised funding."

The Kerry campaign has a marginally more acceptable environmental stance. Kerry has vowed to more tightly regulate harmful emissions than Bush and has outlined an energy policy that promises to provide 20 percent of the electricity in the country from renewable energy by 2020. But even such a plan will mean a great deal of the country's energy in the immediate future will still come from coal, which currently accounts for about 50 percent of U.S. electricity. Kerry has pledged $10 billion, including $4 billion in "deployment incentives" to encourage -- or some might say bribe -- coal-fired power plants to adopt the cleaner technologies, which federal dollars have helped develop.

One technology that holds promise for cleaner coal is gasification, or "integrated gasification combined cycle systems," which convert coal into a gas before generating electricity.

"That enables it to burn more efficiently and more cleanly than traditional coal-burning power plants," explains Environment 2004's Christensen. Today's coal-fired power plants in the United States are about 30 percent efficient -- which means about 70 percent of the coal's inherent energy value is wasted as it is burned to create steam -- but the Department of Energy predicts that gasified plants could be as much as 60 percent efficient.

Environmentalists say that really investing in clean coal technologies will result in benefits beyond just cleaning up our own environment -- there's also the prospect of exporting them to the rest of the world. "We're expecting globally a tripling of the use of coal in the next couple of decades," says the Apollo Alliance's Hendricks. "China being a huge piece of it, but also India, Iran, Korea. Many parts of the developing world are planning to put new coal plants online. It could be a very significant export technology."

But the irony is that some of the technologies now used to make coal burn cleaner can increase CO2 emissions, since the new technologies also require energy to run.

"When you have a scrubber on a plant, it decreases efficiencies. It's like putting a muffler on your car. If you're adding scrubbers, they use energy to run them, and you have to burn more coal to get the same amount of power. So, there would be more carbon for unit of juice coming out of the plant," says Davies, of Greenpeace.

Even coal gasification doesn't entirely escape the problem of CO2 emissions and global warming. "We need to get to close to zero total CO2 emissions, and you're not going to do that with efficiency," says Keith.

Only somehow keeping the carbon from escaping into the atmosphere via carbon-sequestration techniques could achieve that. But the costs of bringing such a futuristic solution to market have yet to be explored: "The perfect solution of coal gasification with carbon sequestration on the back has not been used enough to really get at what the costs are going to be," says Galloway from the Union of Concerned Scientists.

In the meantime, the coal industry seems intent on promoting how relatively cheap coal is now, while continuing to push the message that CO2 emissions and global warming are nothing to worry about. The "members only" section of the Americans for Balanced Energy Choices Web site disseminates fact sheets attempting to debunk global warming, including this chestnut: "A gradual sea-level rise of 10 inches over the course of the next 100 years will not lead to cataclysm; in fact, it may prove hardly noticeable at all."

Maybe to an eagle. But not to anyone living on the ground in Florida.