New Republic senior editor John Judis talks with Salon about his new book, the Iraq war's grim precedents, and the next president's desperate need to have a heart-to-heart with Syria and Iran. 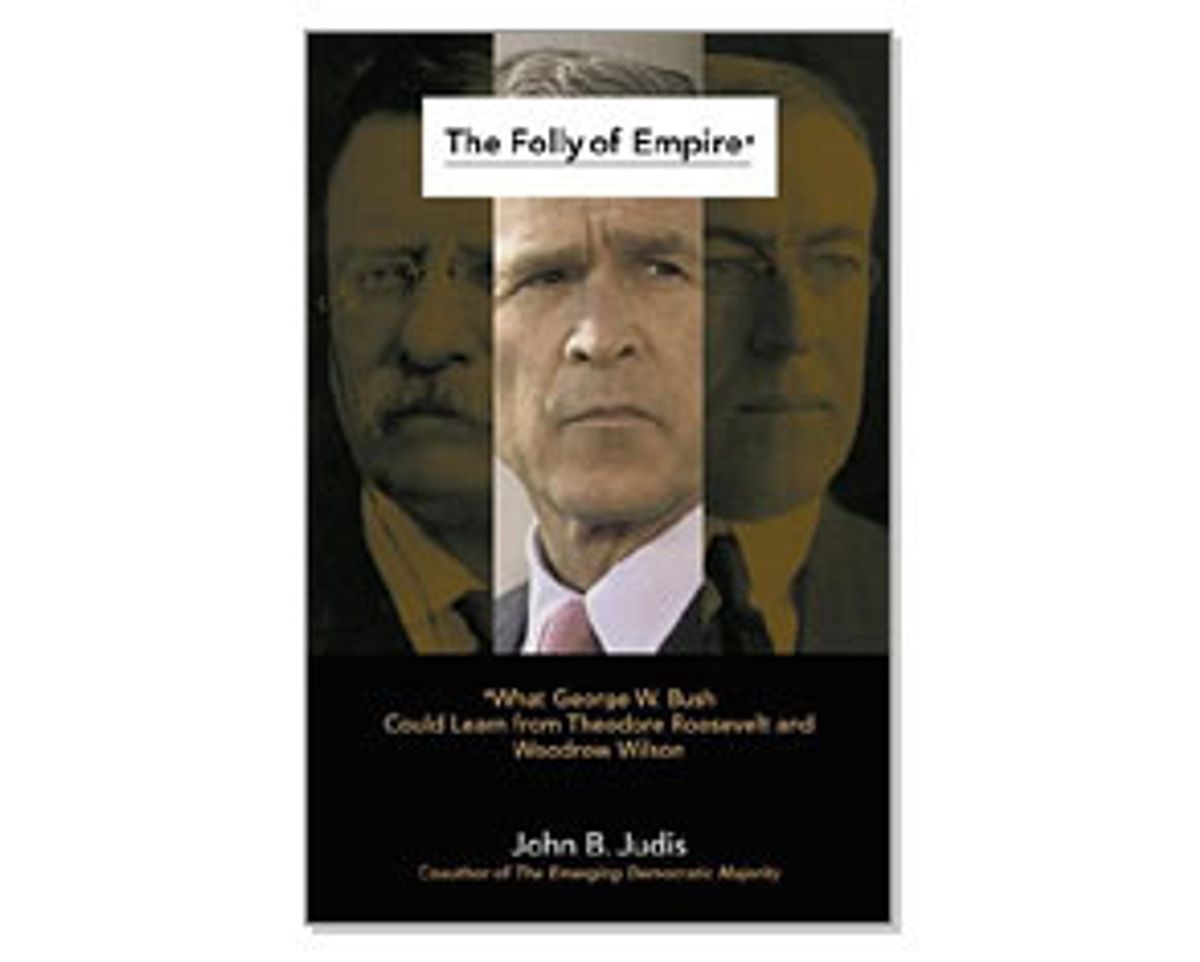 It's been observed that how we remember wars is rarely how we fight them. The Second World War did not truly become a fight against monstrous evil until decades later, when the extent of the Holocaust became clear to Americans. For many, the Vietnam War did not become a calamity until after the last American troops had been evacuated from Saigon. Both wars, on a day-to-day basis, looked the way the Iraq war does now -- a series of loosely connected violent events, hopeful pronouncements and conflicting information. While the practical details of the Iraq war provide ample fuel for debate-- whether, for example, we began the occupation with too few troops or erred by resurrecting Saddam's most notorious interrogation center as a coalition prison -- there is still the question of what it will mean.

John Judis' new book, "The Folly of Empire," is an early but persuasive salvo aimed in the direction of that question. He argues that the war in Iraq is a doomed throwback to America's last turn-of-the-century bout with imperialism, when it took 14 years of brutal fighting in the Philippines to cool American fervor for empire. The book compares Bush's foreign policies to those of Teddy Roosevelt and Woodrow Wilson. Neither comparison is flattering, and Judis portrays Bush as incapable of learning from his predecessors' mistakes as from his own. Equal parts foreign-policy history and campaign-season assault, "The Folly of Empire" is a plea for returning cooperation to foreign policy and removing Bush from office.

Judis spoke to Salon from his office at the New Republic, where he is a senior editor.

You portray Teddy Roosevelt as an imperialist eager to expand America's greatness through force, and Woodrow Wilson as one who wanted to use America's influence to help build equality among nations. Where does our current president fit in?

It's hard to talk about Bush's motivations. He is not, to say the least, a dominant intellectual figure as a president, especially compared to somebody like Wilson or Roosevelt, or even to Clinton or Reagan. You have to understand him as the resolution of different currents and pressures within his administration. Bush is clearly a decisive man. But is he a neoconservative? I'd hesitate to call him that. You can talk about what the Bush administration's foreign policy is, but I have a hard time talking about Bush himself as having clear motives and designs.

What currents are winning out in his administration?

A lot of Bush's defenders, particularly neoconservatives, describe him and themselves as Wilsonians. I think that's entirely wrong. By wanting to transform the Middle East in America's image, Bush is fulfilling a kind of Wilsonian foreign policy. But we've had this evangelical view of ourselves ever since the first settlers from Holland and England arrived in the 17th century and saw their role as creating a kind of new Israel.

In the early part of America's history, we thought of remaking the world by example, by creating "a city on a hill." In the late 19th century, Theodore Roosevelt, Henry Cabot Lodge, and various other American leaders argued that America should become an imperial power, and on that basis they urged McKinley, after the Spanish-American War, to annex and take over the Philippines in order to "civilize" and Christianize it. Wilson also talked about America as a liberating power, as bringing salvation to the world.

What separated Wilson from the young Roosevelt, however, or from George Bush's administration, is that he learned something: When he sent troops in 1913 to get rid of the Saddam Hussein of Mexico, a guy named Huerta, he found the United States facing an alliance of Huerta and his opponents -- even though he'd expected Huerta's opponents to unite with us and greet us as liberators. Wilson figured out that trying "teach Latin American republics to elect good men" would only provoke a nationalist reaction and obscure America's effort to create a democracy, to get rid of a dictator.

So the neocons are only Wilsonian in the sense that every president since Washington on has been Wilsonian: They've all had this evangelical sense of America. The neocons haven't learned what Wilson did -- that if the United States or Britain goes into a country and tries to impose its way of life on it, it's a disaster.

You note that a president's approach to war is often molded by the fortunes of a previous military conflict. How did the invasion of Afghanistan affect the Bush administration?

After the United States defeated Spain in 1898, Americans felt this incredible exhilaration. The country previously had been in the shadow of the Civil War, which looked like it was going to destroy America. And we'd never won a war overseas. So afterward, we suffered from what a British journalist later called "an illusion of omnipotence," which encouraged the McKinley administration to annex the Philippines. They thought it would be easy, and they had businessmen from Manila telling them that it would be easy -- sort of the Filipino counterparts to the exiles from Iraq.

Bush had a very similar experience. When we went into Afghanistan initially, Bush and the Pentagon worried we would be fighting for a year. Rumsfeld was counseling "patience." But all of a sudden, in the space of a few weeks, the Taliban folded up their tents -- they were gone.

So by December of 2001 one finds in Washington the same sort of exhilaration that followed the Spanish-American War. Bush gives these boastful speeches about how people thought we were a paper tiger, but they'd better think again. I think it was an important factor in leading him -- who was initially very cautious, in terms of his foreign policy -- to agree to this wild idea of invading and occupying and transforming Iraq.

There's a strong hope among many Democrats that Kerry can "internationalize" Iraq and somehow get things on a different track. But what could John Kerry realistically do to make this a world project?

You know, my fear is that a Kerry administration could suffer the same fate as Nixon and Kissinger in '68. They'd want to change things, not be able to do it, and end up prolonging the war.

But just by being a different administration, Kerry will have an opportunity to change American foreign policy and gain sympathy and support from countries that previously opposed us. That's particularly true in Europe, though I don't think that the solution is to get the Germans and the French to send in troops. People who say that's the solution are just asking for dead Frenchmen and Germans.

More importantly, Kerry will have a chance to turn around American relations in the region and bring the neighbors in. That would mean Iran and Syria, as well as Turkey and Saudi Arabia and the Emirates. Iran is the most important. Bush made Iran part of the axis of evil. But if we want to get out of there, and at the same time leave a stable Iraq behind us, we need to reach some kind of agreement with them to not encourage a proxy war between the Sunnis, Shiites and Kurds.

Now, getting them to the table and getting them to agree is going to be extraordinarily difficult. I'm not saying Kerry will do that. But at least he'll be in a position to do it.

Syria and Iran are classified by the State Department as terrorist states. How can we justify their involvement?

We worked with Syria in the first Gulf War and with Iran in the war against the Taliban. Gaining their support in trying to create a stable Iraq is a higher priority right now than punishing them for supporting groups that are using suicide bombers to fight the Israeli occupation of the West Bank and Gaza.

In your last book, "Emerging Democratic Majority," which you co-wrote with Ruy Teixeira, you predicted that the nation was shifting in favor of Democratic positions on economic social issues. And Kerry consistently polls ahead of Bush on issues like healthcare and jobs. Yet those advantages hardly seem to guarantee him victory in November. Why not?

You know, Kerry has two problems. We noted that national security has been one of the Republican conservatives' drawing cards ever since 1980. Bush's success after Sept. 11 reinforced that, and explains why in the middle of a recession, the Republicans got the better of the 2002 elections. Without that, they would have lost considerable seats.

The second problem is that Kerry is a kind of candidate by default -- Gore dropped out, and it was a weak field. The most arresting politician, Howard Dean, was someone who didn't appear to be viable as a general-election candidate. Kerry won the primary, but it's no secret by now that he's not a stellar politician.

So demographic trends favor the Democrats on social and economic issues, and there's the Iraq war, which casts some doubt on Bush as commander in chief. But add in Bush's advantages -- the war on terror and Kerry's ineptitude -- and you get a very close race.

You come out very strongly in favor of making the international community a partner in American foreign policy. But even now in Darfur, the U.N. is vacillating while government-sponsored genocide continues. Considering that much of the U.N.'s General Assembly is composed of dictatorships that don't protect the basic human rights of their own citizens, and that the organization is notoriously inefficient, how can we treat the U.N. as a partner?

My view is that when the United States is not immediately threatened, when we're trying to make the world a better place, it's best to do that with other countries. Whether we do that through the United Nations, NATO, the World Bank, or various other ad hoc organizations really depends on the particular circumstances. I don't see any magical role for the United Nations.

In some cases, like the Gulf War, the United Nations has been extremely useful and important. In other cases, like the one you cite in Africa, I can imagine that it would be less effective, and that countries that wanted to take action would have to find some other international forum.

But I think we would be making a big mistake to take it upon ourselves to go it alone. If, for instance, we had tried to do that in the Balkans, in Bosnia and Kosovo, I think we would have faced a situation similar to the one we now face in Iraq, where we're seen as conquering powers. Because we went into the Balkans through NATO, we muted that criticism enough so that our intervention was seen as an attempt to end a conflict, not to take over Serbia.

In his meeting with Allawi last week, Bush spoke in Wilsonian terms of bringing Iraq into a sort of brotherhood of democratic nations. How will what's happening in Iraq influence future interventions for security and humanitarian reasons?

For now, other nations will distrust our motives. They'll wonder whether, in intervening in a particular place, we're really after the country's resources and want to establish military bases there -- all the doubts that have already occurred to Iraqis. It has already become very hard for us to advocate for human rights in light of having committed gross violations ourselves in Iraq, torturing prisoners. We've already put ourselves in a position where we're seen as hypocrites when we advocate for human rights.

I think the legacy for intervening on behalf of security will be a positive one: People will think twice before they believe a president who says we're under imminent attack. Again, that's another reason to get rid of Bush. We need to revive our reputation as a country that freed itself from imperialism and is a model of self-determination to the world.