Poked and prodded by his younger opponent, Old Dick lets loose clouds of steam and ash but doesn't blow. 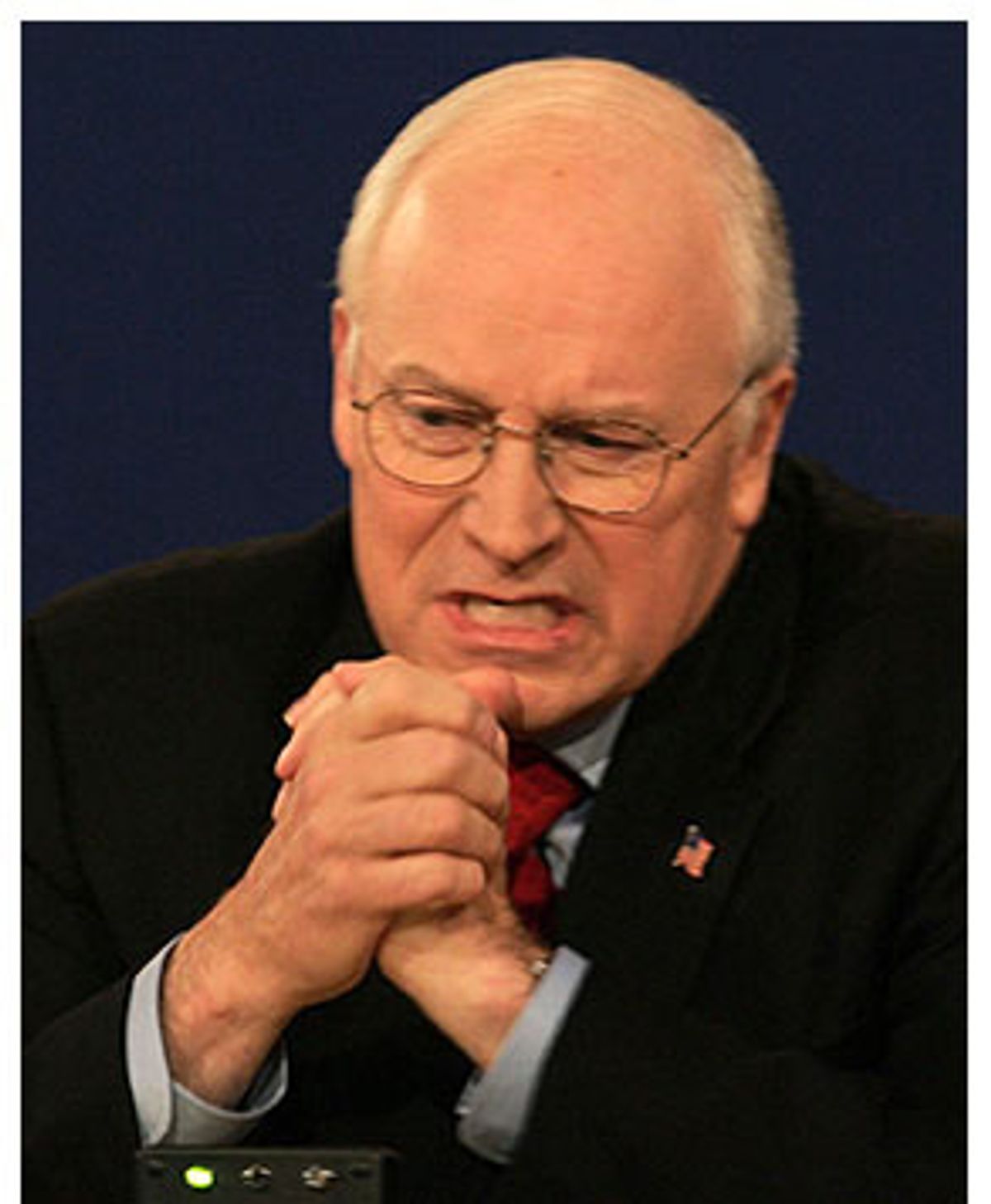 The man known as "only a heartbeat and a jumpstart" away from the presidency called Democratic Sen. John Edwards to account for his impertinent truth-telling Tuesday evening in a debate at Case Western University.

Conceding the point, Edwards recognized Dick Cheney's most notable and enduring campaign strategy, saying, "Mr. Vice President, you are still not being straight with the American people."

Throughout the 90-minute debate, Cheney drew on his long experience, carpet-bombing the proceedings with magnificent mendacity. Whether claiming never to have met John Edwards or denying that he had frequently made a false connection between Iraq and September 11, the front end of the Cheney-Bush racehorse was out to show that he could have his yellowcake and delete it too.

Cheney also proved himself the expert at directing many answers under the table, the better to highlight his preferred location for making deals. At other times the vice president, who suffers from prolonged lack of exposure to all known light sources, folded himself neatly into his own skin while simultaneously executing an upward glower, a downward bite, and a sideways utterance. This left Edwards, the political neophyte, with no choice but to look the American people square in the eye and speak plainly. Indeed, Edwards looked every inch a Portrait of the Senator as a Young Man to Cheneys older, more developed Portrait of Dorian Gray.

The debate, which took place in what now ranks as the most impoverished city in the nation, as well as the state that has lost nearly a quarter of a million jobs under Bush and Cheney, and which has had 37 soldiers killed in Iraq, asked the difficult question: which presidency might better serve America? Queried on this point in a national poll, several unemployed, impoverished, hungry, beaten-down, undecideds -- who had been intimidated by elections officials, held up for $7.4 trillion dollars, had their children carried away by flying monkeys, and seen Karl Rove in a bi-plane skywriting the words, Surrender, Democrats -- said that they were still not sure." A few ventured that they would have a better understanding of the facts once somebody had hit them on the head with a large billboard emblazoned with the words Soylent Green is . . . . People!"

For the most part, Cheney was eager to discuss the benefits of staying the course in the war on global terrorism, which, of all the wars hes loved before, is clearly his favorite. Brushing aside the fact that, thanks to the administrations rush to divert military resources to Iraq, Afghanistan is a drug-dealing, warlord-ridden killing ground with a growing number of hiding places for Osama bin Laden, Cheney offered voters his most optimistic vision of the future yet -- namely, that one day, this too could become another El Salvador.

El Salvador is a whale of a lot better because we held free elections," gushed the vice president, rising up from the depths of his own drivel with a firm slab of blubber clenched between his pearly whites. The power of that concept is enormous," he gnashed gnawingly, "and it will apply in Afghanistan. And it will apply as well in Iraq. Void where prohibited in Ohio or Florida. This offer not good to anyone who has not signed the loyalty oath."

As Edwards repeatedly poked at Cheneys murmuring continuum of schlock and jaw, the vice president continued to rumble, letting loose clouds of steam and ash that, according to scientists from the U.S. Geological Survey, were visible from 200 miles away.

To be fair, Edwards failed to point out that Cheney did vote in favor of making Go f**k yourself" the official bumper sticker of Reggie the Voter Rig.

Still, there were indications that Cheney might actually be tiring of working a double shift in the Rove-al Office. At one point, in response to Edwards comments about Halliburton, now under several criminal investigations arising from activities that occurred during Cheney's tenure as CEO, the vice president encouraged anyone interested in getting "specific details" to visit www.factcheck.com, a site funded by Democratic philanthropist George Soros. Visitors to the site were greeted with compelling testimony entitled President Bush is endangering our safety, hurting our vital interests, and undermining American values. Plus, hes got Texas toast between his ears."

Which may explain a curious silence on Cheneys part. Twice Edwards mentioned Kerry in response to the one question for which moderator Gwen Ifill asked that there be no reference to either mans running mate. And while Edwards mentioned Kerry by name dozens of times in the course of the debate. Cheney, for reasons unknown to anyone not yet born, took great pains to avoid mentioning Bush at all. (Memo to Bush: And you thought Kerry forgetting Poland was significant.)

He did, however, give a shout-out to some precinct committeemen in Iowa to emphasize that he couldnt care less what such people thought about him. It was one of just many heart-stopping moments when Big Dick took out his true feelings for the American people and waved it in their faces.

Edwards closed with a message of hope for a weary nation that misses its loved ones, its jobs, its democracy, and the days when Dumb and Dumber was a movie, not foreign and domestic policies. Ever the statesman, Cheney assured voters that a Kerry victory might lead to terrorists bringing a nuclear bomb into a major American city and killing hundreds of thousands of people. Whether this would disrupt e-Bay access, a key economic indicator according to Cheney, he did not say.

Afterward, Edwards posed for photographs with his children while Cheney made haste to rejoin the children of the night. Asked about Cheneys whereabouts, Defense Secretary Donald Did I Know Anything? And If So When Did I Know It? Rumsfeld commented, He has migrated in the most amazing way.

Pressed as to whether Cheney might have stopped off somewhere to pick up an ounce of credibility and then returned home to help Bush finish his homework, Rumsfeld looked thoughtful. "To my knowledge," he said, I have not seen any strong, hard evidence that links the two."