Mother of all home movies

Jonathan Caouette explains how he captured his turbulent childhood and his mentally ill mother in his documentary "Tarnation" -- which he created on his computer for $218. 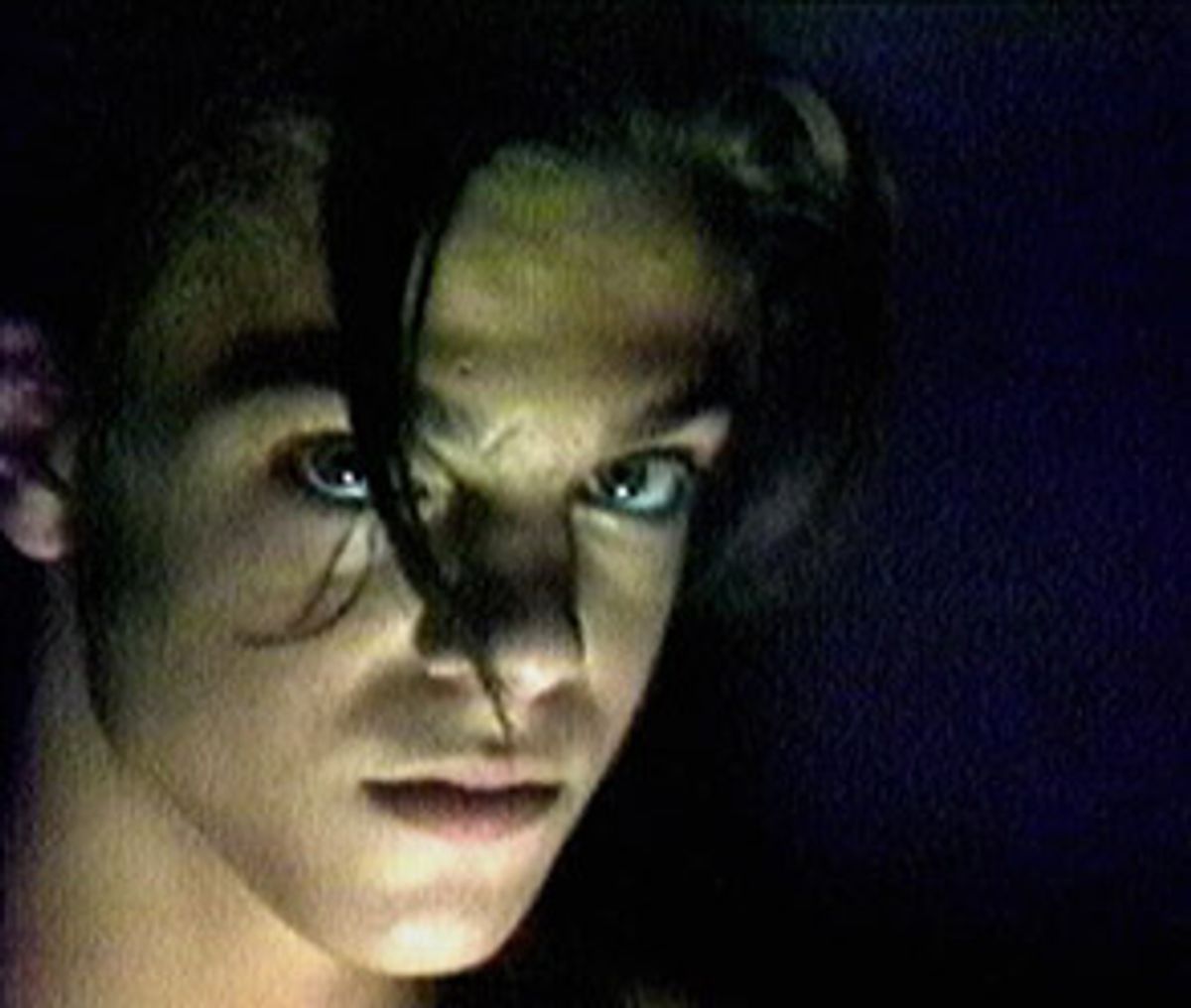 Jonathan Caouette's autobiographical "Tarnation" unfolds with the vigor of hallucinatory thought -- a hyperchaotic collage of Caouette's own gauzily saturated Super-8 footage, family snapshots, amateur short films and clips of '80s television, set to a moody, haunting soundtrack of ambient music. It's earning accolades, and not simply because the film was edited entirely using Apple's iMovie editing suite -- standard system software included on most Macs -- which accounts for its much-publicized (before postproduction) budget of about $218.

Caouette, born in 1972 in Texas, began documenting his daily life at age 11 by interviewing family members, filming confessional-style monologues and making short films, all to escape the dysfunction surrounding him. His mother, LeBlanc, a childhood beauty queen, underwent frequent shock therapy after she was diagnosed with a a mental condition in her youth, which the film suggests doomed her to a life of numerous hospitalizations, physical abuse and mental instability, and left Caouette to grow up mostly with his grandparents. Caouette himself was later diagnosed with depersonalization disorder -- an affliction characterized by feelings of detachment from one's own body or thoughts.

In 2003 LeBlanc overdosed on lithium in Texas -- which we learn of in real time, on-camera, along with her director son -- while Caouette was living in New York, forcing him not only home again, but also to examine his difficult past.

The story of "Tarnation's" provenance is almost as amazing. In its earliest stages, Caouette's collected footage served as experimental fodder for flashback sequences for a fictional short film the director was making. Then the loosely archived material became part of an audition tape Caouette submitted for a part in John Cameron Mitchell's "Hedwig and the Angry Inch." An impressed Mitchell encouraged Caouette to collate his archived material into a film, and passed him on to Gus Van Sant, who signed on, along with Mitchell, as an executive producer. Caouette completed the final 88-minute version just in time for it to show at the 2004 Sundance Film Festival. The film opens this week in New York, and will play in more cities in the weeks to come.

Salon spoke with Caouette as he prepared for the film's showing this week at the New York Film Festival.

First, how is your mother doing now?

That was gracious of your boyfriend.

He's got an infinite capacity for compassion, and I've never met anybody like him. It's a daunting thing to ask of anyone, any couple, gay or straight, to have a mother living with them, never mind a mother with a mental illness. We've been together for about seven years without any bumps and bruises, and that's kind of a miracle in New York.

Does your mother know about the New York premiere?

She does, she does. She's ecstatic. Neither she nor I ever really knew that this would be my way of -- that the real McCoy of footage was sitting under my nose.

At times, it's truly painful to watch --

It still is kind of tough for me to watch sometimes. I cringe at certain parts even though I've seen it about a hundred times by now.

How has it been to get feedback from people you've never met but who now know you, from watching the film, more intimately than they might know their own friends?

It's strange, and it's bizarre, and really beautiful, because I never realized how accessible the film could be to people, and I think the real testament to that was at the Roger Ebert film festival in Illinois. I thought it was just going to be a bunch of kids hanging out, because it's a college town, and I walked into the auditorium, and it was like 70 percent women in their 80s. I thought that they were going to walk out. I had no idea what would happen, but lo and behold, they came up afterward, and without even saying a word just began a dialogue about things going on in their own personal lives, people that were in their lives that they knew had suffered from mental illness -- some of them had even overdosed on lithium like my mother -- and it was just really great to begin a conversation with somebody like that without any B.S.

Is there any lingering regret that you might have exposed yourself too much in revealing your own bouts with mental illness?

No, not really. At the beginning I was petrified that I was going to be exploiting both me and my mother. The first time I came out to her and showed her the movie was in front of an audience of about 500 people. I was pondering what it was exactly that I was doing and then she saw it and I finally realized that it's OK. It was a great story to get out there. I was petrified to sell the film more than anything. I was really scared that the distributors were going to pick the film up and apply it with a label, as a sort of "found art" and position me as a "director," director being in quotes, and that ultimately I would be the one exploited. But thank god that people get it, and they understand the whole thing. I know it's not a popcorn movie by any means, but it is a story that people really do get and that's a good thing. A validation that our society still is capable of being empathetic.

Some of the scenes in the film featuring your mother, when she's displaying her illness -- particularly the scene where she performs a stream-of-consciousness monologue, clearly unable to restrain herself or maintain her attention span -- make for difficult viewing. People leaving the theater might question your judgment in showing her in that state, that maybe you're exploiting her.

People have sort of said that, but I never really thought it did. Really, for the record, my mother and I are actually having a really good time in that scene, and I just think that the context of where it's played makes it a lot darker and possibly exploitative, but again I really don't think it is. It's really an expression of what mania was like -- a manic state -- or mental illness in general. I just think Hollywood directors candy-coat -- any directors -- candy-coat mental illness. They tend to bring the idea to audiences based on what they think they're going to understand, and sort of deconstruct it from the human condition without showing its real effects.

The footage of you from when you were 11, filming yourself in stark close-up portraying a mannered, melodramatic mother suffering a violent relationship early on in the film is really remarkable to watch.

Thank you. It's pretty crazy -- you know, when I did that I was basically imitating my mother.

Kind of -- she's not really a hard, Texas diva like that. It was sort of an impromptu monologue that was definitely in relation to some experiences that my mother was going through at the time with her failed second marriage.

I'm willing to bet that your film contains the only theatrical version -- featuring members of your high school drama society -- of David Lynch's "Blue Velvet."

Yeah -- a musical. That was crazy as well.

Speaking of Lynch, it's apparent that his work has affected you.

Yeah, I'm highly inspired by Lynch. One of my dreams would be to direct something of his, though I know it would never happen -- it's a highly delusional dream. But he wrote this amazing screenplay called "Ronnie Rocket" that's been shelved for about 20 years now, and it's kind of a sequel to "Eraserhead." It's about this detective who goes into a place called "the inner city" to figure out why the electricity has gone in reverse.

I'd love to do it, but I know he'll do it someday.

I was particularly struck with how self-aware you were of your sexuality at such an early age, especially with the manner in which it is conveyed: your young voice, quietly declaring, "I'm gay and I've always known I'm gay," so intimately that it sounds like it was taken from an answering machine message.

Me too. I was essentially out of the closet, basically at 12, and I was constantly engaging myself in dangerous situations, like hanging out with random, really bizarre sorts of art fags and pedophiles, going to these gay teen clubs and getting into a lot of trouble. But thankfully, acknowledging my sexuality has never really been an issue for me.

Can you describe your experience growing up gay in red-state Texas?

Red-state Texas. [Laughs]. Well, I don't recommend it. The minute that you do know that you're gay, get the hell out because you will endure a lifetime of hell. I ended up actually, inevitably, dropping out of high school because, in my formative years, it was just hell on earth -- it was absurd. The most out-to-lunch, backward, homophobic, racist people I have known -- but that's not everybody, of course, just many I met. But in general, if you're gay, or an artist, and/or both, get out and find somewhere else to live.

Much attention has been given to the film's minuscule budget and the fact that you edited "Tarnation" on iMovie. What are the implications for other young filmmakers as a result of your success?

Some of the footage was shot with a Sony Handycam, a Hi-8 camera, that I had. At the end of the day, if there's anything to take away from this film it's that it should absolutely inspire people that never felt like they had a voice to get out there and make a film. If you have access to a camera, a computer and a firewire, you're good to go.

The film also shows how integral a part technology plays in facilitating people's understanding of not only mental illness but disease and illness in general. I'm speaking particularly of the scene where you turn to the Internet to learn more about your mother's condition, immediately after you learned of her lithium overdose. That must have been excruciatingly difficult, to read a cold, clinical description of her condition, yet not be able to speak with her.

It was horrible being on the phone with the nurse at the ICU and just realizing what it was that had happened, because I didn't know if she had suffered a massive stroke or what. And at the same time, I was reading all of this frightening stuff about her condition -- I was completely destroyed that weekend. Then I had to get on an airplane and fly down to Texas, and I hate flying, so the whole experience was horrible. But thank god she came out of it, eventually.

Do you have any hopes for what sort of change your film might help precipitate, either in the world of documentary or in people's understanding of mental illness?

People are calling it a whole new genre of film and that's really cool, that's really cool to know. But I don't know if I consciously executed it like that. I wasn't trying to do anything like that, but I really just hope that the film can inspire understanding in people, to see and not look past the "crazy person on the street." Mentally ill people suffer. They suffer. What they go through is hell.

Peter L'Official is a writer living in New York.