The first half of Mike Leigh's latest, about a cleaning woman/abortionist, showcases how he can get amazing performances from his actors. But the second half . . . 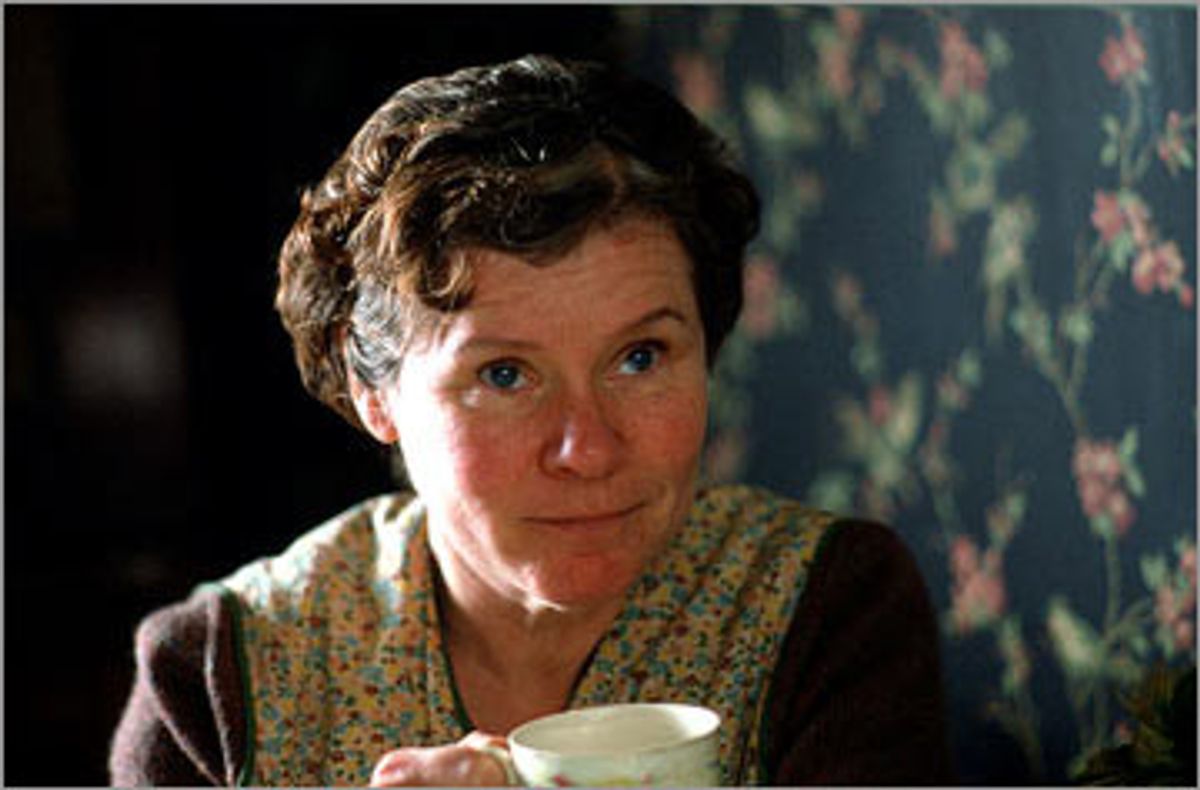 For the first half of Mike Leigh's new film, "Vera Drake"-- which plays in the New York Film Festival this Friday and Saturday and opens theatrically on Sunday -- Imelda Staunton, as the working-class '50s woman who gives the movie its name, keeps a smile on her face. Vera is a bundle of energy and good cheer as she keeps house for her loving husband, Stan (Phil Davis), son, Sid (Daniel Mays), and daughter, Ethel (Alex Kelly), and for several upper-class employers; drops in on her invalid mother; visits a sick neighbor to make sure he and his family are eating all right; invites home a bachelor neighbor to share in her family's supper; and performs abortions on young women who find themselves pregnant.

I'm not coyly tossing that in at the end of a list of Vera's good works. In the movie's scheme, Vera's services as an abortionist, her willingness to help women in a situation they can't see their way clear of, are part of what make her a good, caring person. Vera isn't a polemicist for reproductive rights, and she's not a vulture preying on vulnerable women. She doesn't charge for her services, and she doesn't employ a butcher's methods. Vera induces a miscarriage by douching the young women she attends to with soapy water. And like everything else she does, she goes about it reassuringly, competently, soothingly.

Leigh isn't interested in debating the morality of abortion. What would be the point? Everyone knows where they stand. You either believe it should be safe, legal and available or you don't. Leigh is making a movie about an era when abortion was illegal, but whether it was safe and available depended on which class you belonged to. We see a rich young girl (Sally Hawkins) who's been raped able to talk to a doctor and check herself into a private clinic. And we see the dreary rooms where the women Vera attends to live.

"Vera Drake" gives off a powerful feel for early '50s London, when the glory of surviving the Blitz and beating the Nazis didn't result in a glorious life. Britons were still on rationing. (Vera has to make black market purchases for basics like sugar.) Leigh manages to give us this atmosphere of reduced circumstances and reduced expectations without overdosing on the dreariness or hardship.

The first hour or so of "Vera Drake" is a good demonstration of why J. Hoberman, in his Village Voice review of Leigh's last film "All or Nothing" (one of Leigh's best and least heralded), called Leigh the most Dickensian of filmmakers. Leigh, who famously works with actors for weeks doing improvisation before filming, is often mistaken for a naturalist, perhaps because he deals with social issues. But Leigh's method is that of the caricaturist, and when he's cooking, no one is better at making caricature come alive on-screen, of using caricature for rich dramatic effect.

Leigh can stage a scene like the Drakes cozily sitting around their table at the end of their various work days, enjoying dinner and each other's company, and do it without a trace of the homiletic creeping in. And Leigh can toss in characters who are no more than eccentric doodles (like Chris O'Dowd as the jolly Irish fellow who goes to young Sid, a tailor's apprentice, to get fitted for a suit), and make you delight in them the way you delight in Dickens' eccentrics.

Leigh is considered a whiz with actors and the reason why is evident in scene after scene. For the first half of "Vera Drake," there's good acting everywhere you look -- from the immensely likable Phil Davis as Vera's devoted husband; from Ruth Sheen as Lily, the craven intermediary between Vera and the young women she attends to; from baby-faced, quiff-haired Daniel Mays as Sid; from Alex Kelly, so withdrawn she nearly draws her neck inside her sweater as Ethel; from Fenella Woolgar as the worst friend any girl in trouble could turn to; and from the marvelous Eddie Marsan as the shy bachelor Reg. These actors bring their characters to life in a scene or sometimes just a shot. The performances in "Vera Drake" are what happens when actors find themselves lucky enough to work with a director who loves actors and works to serve them.

And though there's certainly love in Mike Leigh's handing Imelda Staunton her first starring role (whether you know her name or not, you've seen her -- as the stern nurse in "The Singing Detective," as Gwyneth Paltrow's maid in "Shakespeare in Love," in Kenneth Branagh's film of "Much Ado About Nothing"), he winds up serving her very badly.

For the first half of the film, Staunton is remarkable. Watching her bustle into an invalid neighbor's apartment, arrange his pillows and blankets, do a quick tidy up, make a fresh pot of tea, and bustle out again -- all without taking off her coat, you have the sense of someone for whom there is no such thing as a wasted movement or an idle moment. And yet there's not a trace of resentment in her, no sense of being weighed down by drudgery.

Vera is one of life's caretakers without being bossy or cloying about it. Vera belongs to that generation of women (my Canadian grandmother was one) whose cheerful demeanor wasn't some Pollyanna obliviousness but reflected a bone-deep knowledge of just how hard life could be, and a determination to do the the best they could for their families and to do good wherever they could. That's what gives Vera strength.

When one of the young women Vera attends to nearly dies of complications, the police arrest her -- and the movie goes thud, taking Staunton's performance along with it. It's as if Leigh the dramatist is replaced in the movie's second half by a Marxist theorist who is more interested in demonstrating a thesis about class, even if it destroys all the virtues of the movie he's been making.

Once Vera is in police custody, Staunton spends the rest of the movie weeping, often in close-up, and barely speaking above a whisper. It should be an irony that Vera, who is so adept at boosting other people, giving them strength and making them feel they've done it themselves, is helpless to steel herself with that strength.

But this presentation isn't ironic. Leigh is saying that Vera's fearful obeisance makes sense in the way a woman of her class and predicament would react to someone in power. Perhaps. The problem is that the choice wipes out the backbone and the competence of the character that Leigh and Staunton have created. Once Vera is arrested, there's nowhere for the movie to go dramatically, and so we're stuck watching drawn-out interrogation scenes that develop neither the story nor Vera's character.

Not that Leigh should have included scenes where Vera challenges the police (who, for the most part, treat her quite decently) or speaks out for the right of women to have abortions.

Leigh has never before resorted to what some left intellectual filmmakers do, depriving the poor and oppressed characters of their individuality, depicting them as a faceless mass in order to make a political point. (That's what Eisenstein did, and what the Italian Gillo Pontecorvo does in the restored version of his 1970 "Burn!" now opening for the first time in this country.) Vera isn't part of a mass, but by the end of the film she is a sheep.

Leigh's preoccupation with class, which in pictures like "Life Is Sweet" and "High Hopes" has resulted in loving depictions of the pride working people take in making a decent life for themselves, consistently blinkers him here. He goes out of his way to present Vera's sister-in-law, Joyce (Heather Craney), as a nasty, materialistic bitch, though in a country as bleak and economically depressed as Britain was in the '50s, her desire to leave that bleakness behind seems perfectly reasonable. But Leigh the good socialist can't find it in him to show sympathy to her middle-class aspirations.

Joyce will never be in the desperate straits of the women Vera services. And neither will Susan, that rich girl who could go to a lush private clinic to end the pregnancy that resulted from her rape. But Leigh seems determined not to delve too deeply into the indignities that even someone from Susan's class has to face.

It's not that he doesn't show them to us -- we see Susan dealing with a disapproving s.o.b. of a doctor and then having to undergo a psychiatric evaluation before she can check into that clinic. But once she does and comes home to her none-the-wiser rich mama (Lesley Manville), she's summarily dropped from the movie. Susan has served the point Leigh is making about how easy it is for affluent women to get safe abortions (no kidding) and is no longer of use or interest to him.

Leigh knows that Susan's wealth isn't enough to keep her from being ashamed and terrified at the prospect of being pregnant and single -- even if she got that way from being raped -- but he doesn't much care. He undervalues her vulnerability as much as he undervalues Vera's strength. Leigh can't see these women as victims of the same hypocrisy.