In one of the most male-dominated nations on earth, Afghan vice presidential candidate Shafiqa Habibi doesn't play second fiddle to anyone. 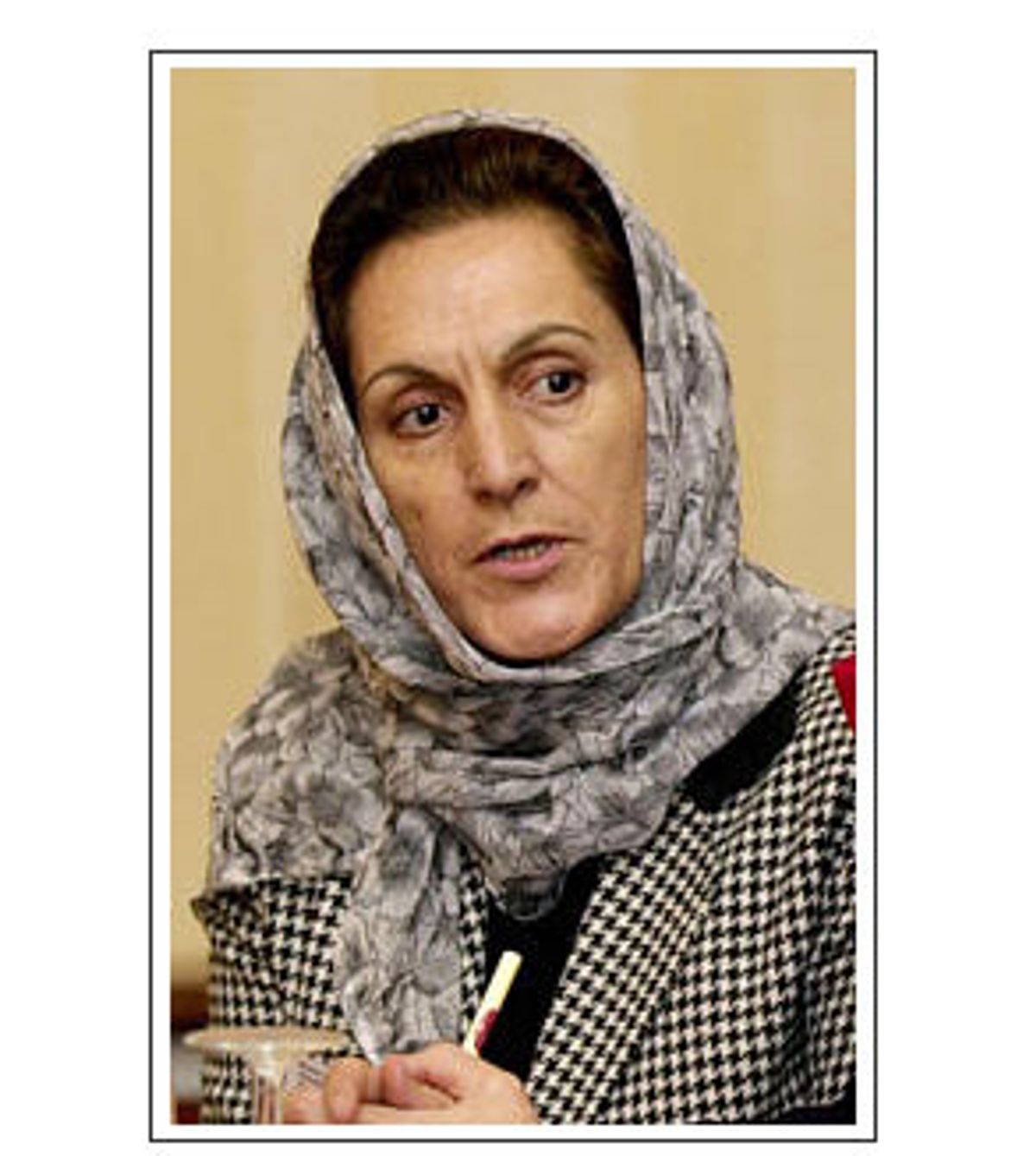 Perhaps the best summary I heard of next week's Afghan presidential election came from one of the freshman boys I've been teaching English to at Herat University. "It is unfair, but we must say it is fair, because it is our first election. Karzai will win because the Americans want him to win."

Sitting presidents have an advantage everywhere in the world, but it is rarely as large as in media-poor Afghanistan. Most Afghans cannot read well enough to understand the newspapers, which are pitched to a high school reading level. In Ghor Province, Afghanistan's poorest, the mention of the word "rouznameh" (newspaper) produced blank stares, as well it might in a province where only a small percentage of the people outside the local capital can read. Together with small, colorful posters found even in village shops, radio and TV are the main sources of information (where there is reception). But in Herat, as in other provincial capitals, there is just one TV station. (The rich here, as elsewhere, have satellite TV.) Before President Karzai deposed local strongman Ismail Khan three weeks ago, the station showed all Khan, all the time. Now it shows a mixture of Kabul and local programming, but the Kabul news coverage is all Karzai, all the time. The other night, I watched nearly real-time coverage of Karzai's recent visit to the United Nations. None of the other 17 candidates for the presidency appeared at all.

With little chance of victory, most appear to be running for a combination of symbolic reasons and free publicity that may help them in the March parliamentary elections, but a few have a chance of leveraging a good showing into a cabinet ministry. Gen. Abdul Rashid Dostum, a so-called jang-salar, or warlord, of Uzbek descent who controls most of Afghanistan's northwestern provinces, is in this category. Dostum seems to be keeping the channels of communication open with Karzai. Although he attacked "financial corruption" in Karzai's bureaucracy at a Kabul stadium campaign rally on Oct. 6, he also had positive words for the president, saying, "After breaking the power of al-Qaida, Mr. Karzai brought us peace and also millions of dollars of outside aid."

Dostum is running as a simple, forthright man of the people who, unlike the vacillating Karzai, will be able to vanquish the Taliban -- a claim that he might actually be able to back up. More unusually, in a society still dominated by the khan class -- landed feudal aristocrats like Karzai's family -- he uses his humble origins to appeal to the average voter. In his Kabul stadium speech he also told the crowd: "One foreign journalist asked me how with little education I could aspire to become president. I told him that we have not come from Europe. We have come from the heart of the Afghan people."

But the most intriguing thing about his campaign, what makes it transcend Afghanistan's ethnic (qomy or, literally, tribal) politics, is his vice presidential running mate.

Shafiqa Habibi is a human-rights worker, a Pashtun, and a public intellectual from an upper-class family. She is also one of only three women in the race.

Habibi is a remarkable figure in many ways. Her human-rights credentials are impeccable. One of 1,000 women nominated as grassroots peace workers for the 2005 Nobel Peace Prize, she has also won the 2002 Ida B. Wells Bravery in Journalism Award. During the Taliban period, Habibi ran eight secret home schools for girls. More recently, she worked for the Afghan Independent Human Rights Commission.

Her political appeal to Dostum is obvious. As a Kabul University graduate from an educated family, married to a former high government official, she has the elite connections Dostum lacks. And as a Kabul-raised Ahmedzai Pashtun whose family is from Logar Province, she brings regional balance to the ticket. (The Ahmedzai are a large, powerful tribe, and Afghanistan's royal family belongs to a subgroup.) She's perfect on more subjective grounds, too: While Dostum is burly and intimidating-looking to some Western reporters, Habibi looks every inch the television announcer she was for more than 20 years.

The two running mates might seem to have a puzzling lack of common ground, until you know that Habibi and her husband were among the 200,000 Kabulis, including many of the most educated, who fled after the mujahedeen took the city in 1992 for Mazar-e-Sharif. There Dostum managed to maintain law and order and fend off the Taliban until 1997. Habibi's husband, Dr. Mahmoud Habibi, was also in the same orbits as Dostum at that time. A Ka Khel Pashtun from a famous Kandahar family, he was variously minister of information under King Zahir Shah, president of the senate under Najibullah, and governor of Kabul, Kunduz and Panjshir provinces in the 1970s.

Given that this is the first election in which Afghan women can vote, Habibi's presence in the race, along with two other female candidates, is extraordinary. On Kabul's streets, I saw vastly more women showing their faces than in fall 2002, and I was told, but didn't see, that a few elite women were driving cars. (Nothing had shocked my English students more in 2002 than my being "allowed to" drive a car in the United States.)

I briefly saw Habibi at the Oct. 6 rally in Kabul where Dostum spoke. She had come straight from the airport from a campaign rally in Herat. She said that it was the first time in history that women had participated in such an event in Herat. Of the crowd of 1,000, 100 were women, she said: "some in chadoris, some in burqas, some not wearing chadoris or burqas."

Despite these signs of progress, it's hard to predict whether female candidates like Habibi will pick up women voters' support, or whether ethnic and class loyalties -- or the injunctions of their husbands -- will prove more decisive.

Whatever the results of the election, Habibi's political career is sure to continue. If Dostum doesn't win, she says she may run for Parliament. She could receive a cabinet position. And she recently started a cross-party women's political committee.

I met with Habibi on the mornings of Sept. 20 and 21 to hear her answers to questions many Afghans were asking: why she had joined Dostum's ticket and why she thought Afghans should give her their vote. We spoke in a mixture of English and Dari while my friend Dr. Shafiq translated when necessary.

Sitting ramrod straight on a small, uncomfortable-looking couch in her modest walkup apartment, Habibi is a beautiful, poised woman who appears to be in her late 40s. Her floor-length, long-sleeved dress, navy blue with light blue and white flowers, combines elegance with modesty. Her fresh appearance is a shock if you know that she was reporting in 1959, when Afghan women were allowed to appear in public without the veil, and that she graduated from Kabul University in 1966. I reflected that it must be difficult to look so polished in an apartment where the electricity works only a few hours a day. While the Soviet-built Microrayon complex was once the height of chic, it's now badly deteriorated, like much of Kabul.

What do you think of General Dostum's past? Isn't it going a step backward to ask Afghans to vote for a "warlord"?

You should not speak of him as a warlord. He is different. He always worked with the government he was with, whether Najibullah or the mujahedeen or the Americans after 11 September. And he likes to help intellectual people. That is another difference. During the mujahedeen period, he protected them. One night the mujahedeen decided to kill all of the professors at the Polytechnic in Kabul because they were [Afghan] graduates from Russia. All of his soldiers surrounded the Polytechnic and protected the professors. He said to the mujahedeen, "Our agreement was not to kill our people. It was to make peace in Kabul." All of those professors went out of Kabul.

How did you get involved with his campaign?

When I was in the constitution Loya Jirga [grand council], I heard some discussion about federalism in northern Afghanistan and some proposals to give all Afghan nationalities the right to study in their national languages. It was a good idea, but there were some problems discussing it. We need to work with national unity in Afghanistan. So I talked with Dostum's people in March 2004 about working with them. Then they requested me to help him as a candidate.

What do you think of President Karzai?

Karzai never did anything he promised. The money from foreign governments has not reached the Afghan people. Even here, in Microrayon, the electricity only comes at 8 o'clock. Maybe some people in his [Karzai's] government are not honest. I do not know about this. I know that the only one who has responsibility for all of them is the president.

Even President Karzai has difficulty controlling the Pashtun south of Afghanistan. If Dostum somehow wins, how could he, an Uzbek, do better?

If General Dostum wins, he will run out all the Taliban and al-Qaida from Afghanistan. They will not be there. He will do very soon the DDR ["disarmament, demobilization and reintegration," the U.N.-sponsored program for Afghan militias]. In two years Karzai's government has not been able to do anything.

What will your responsibilities be if you become vice president?

I will work with women's rights and social and cultural programs. My program for women has two sides. For the small, small number of educated [tahsillat] women, we will help them to use their knowledge. But for the 98 percent or 99 percent that are illiterate, we will promote four rights: the right to speak up in their families and make decisions concerning their own lives, including the right to refuse marriage partners proposed by their families; the right to literacy; the right to work; and the right to healthcare for them and their children.

The Koran gives a lot of rights to women. But it is Afghan tradition that the girl must be quiet. She must not say no to a man her family chooses. Sometimes two families that are fighting exchange women to settle the fighting. Also she may be forced to marry her husband's brother if she becomes a widow. The Koran does not say this.

What do you think of the situation of Afghanistan now, three years after the defeat of the Taliban?

Now we have some liberty. But this liberty was given to us not by Karzai, but by the coalition forces. Sometimes Karzai gives a green light to the Taliban. He works two sides. He always has.

How about the situation of women?

We got our political rights to take part in this election for the first time in Afghan history. In the northern provinces, 48 percent of the voters registered are women. There would be more if they had better transportation. A lot of this is due to the activity of Junbush [Dostum's largely Uzbek political party]. This election is a very great experience for Afghan women. If I am elected or not, I will continue on this way. If we do not win, I may run for Parliament in the coming elections.

Just before leaving her apartment, I asked if I might take Habibi's photograph. She told me to wait a moment, then returned wearing a black headscarf instead of the blue-and-white one matching her dress that she'd worn throughout the interview. Apparently a patterned headscarf is still too liberal for public appearances.