Gael Garcia Bernal looks beautiful dressed as both a man and a woman in Pedro Almodovar's latest, but the movie lacks a real woman's touch. 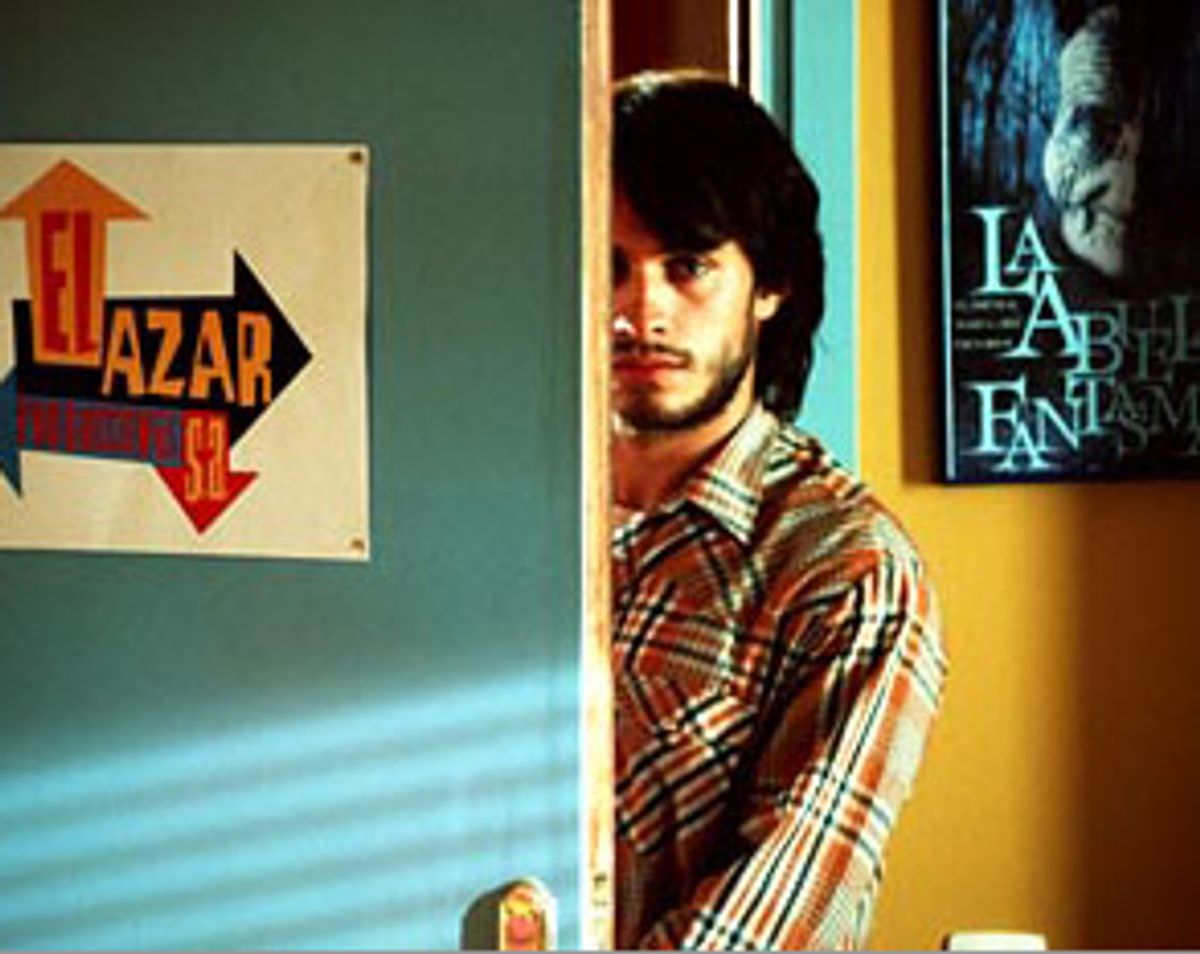 Pedro Almodóvar's 14th picture, "Bad Education" -- which plays the New York Film festival this Saturday and Sunday and will open theatrically later in the fall -- isn't a comedy or a melodrama. Almodóvar, who also wrote the script, has described it himself as a film noir, a template the movie seems to fit well enough, albeit somewhat unconventionally.

In "Bad Education," which is set in 1980 Madrid (with flashbacks to 1964 and a fictionalized story-within-the-story that takes place in 1977), a successful film director, Enrique Goded (Fele Martínez), is having trouble finding a subject for his next picture. Into his office walks -- stalks might be a better word -- a scruffily bearded but charismatic creature who calls himself Ignacio (Gael García Bernal), an aspiring actor who hopes to be cast in Enrique's next picture.

"Ignacio" and Enrique aren't strangers: Years before, as schoolboys, they had just begun to fall in love. But a priest at their school, Father Manolo (Daniel Giménez-Cacho), desperately in love with Ignacio himself, had Enrique sent away. Enrique and Ignacio haven't seen or spoken to each other since, and while Enrique is intrigued by the sudden appearance of his old friend, he begins to realize that something about him isn't quite right, not least his insistence on being called by his professional name, Ángel, and never by "Ignacio."

Ángel was a writer before he became an actor, and he has brought Enrique an idea for his next movie, a short story that closely follows the shared history of Enrique and Ignacio as schoolboys. In the story, Ignacio has grown up to be the sultry female impersonator Zahara (also played by Bernal). Zahara, while performing in a nightclub, meets and picks up a gorgeous, seductive stranger, who she learns is her long-lost love, Enrique. Zahara and her friend, Paquito (Javier Cámara, of "Talk to Her"), then set out to take revenge on Father Manolo, the villain responsible for Enrique and Ignacio's tragic separation.

The real-life story of Enrique and Ignacio intertwines with the fictionalized one, and both take numerous twists and turns in which passions are inflamed and deception reaches the level of performance art. Enrique, the sensitive movie-director type, is something of a cipher: We never learn much about him, and although Martínez plays him with quiet thoughtfulness, he's the sort of character who slips out of our memory whenever he's off-screen. (Almodóvar claims "Bad Education" is autobiographical only in a broad sense, drawing from his boyhood and from stories about abusive priests that filtered back to him through his schoolmates.)

Bernal is the real star here, and at the very least, he's certainly something to look at: Slithery in a sequined dress, or looking suitably Adonis-like in his tighty-whiteys, Bernal, dressed as a man or woman, is this noir's obvious femme fatale. But Bernal, who was so terrific in "Y Tu Mamá También," seems unreadably opaque here, largely because of the way the character is written. We can never quite warm to him, even in the way we grow to "like" traditional noir villainesses. Bernal's character is alluring but ultimately not particularly interesting: Not even lies and deceit can make him/her glamorous.

Although sexual abuse is the catalyst for much of the drama in "Bad Education," this isn't a judgmental, preachy picture. Nor does it fixate on the damage that abusers can inflict (although it does acknowledge that such damage can be lasting and sometimes inescapable). But for once, Almodóvar isn't playing the provocateur, and while it's his right to reinvent his approach from movie to movie as he so desires, the Almodóvar spark is missing here. The scenes that are supposed to be funny, or vaguely outrageous, feel inconsequentially soft. "Bad Education" is neither deliriously perverse (like "Matador") nor ardently melodramatic (like "All About My Mother"). Despite the loveliness of José Luis Alcaine's cinematography, the picture just sits flat on the screen.

The big problem may be that "Bad Education" features only one "real" woman: Ignacio's mother, played by Petra Martínez, who appears in only a few brief scenes. She isn't a glamorous character, but I found myself perking up whenever she appeared. Note that my definition of a "real" woman in an Almodóvar movie is infinitely flexible: For instance, the wonderful Antonia San Juan, in "All About My Mother," is about as real as they come.

But women characters -- crazy ones, grounded ones, funny ones -- always bring out the best in Almodóvar, and he has a knack for choosing actresses (like Carmen Maura and Cecilia Roth) who know how to put good-natured, if wacky, complexity on the screen. Bernal is beautiful to look at, as both a man and a woman. But he just doesn't throw off the same kind of feminine energy that typically gives Almodóvar's movies, even some of the not very good ones, their vitality and sense of spontaneity.

Almodóvar has always sought out such marvelously off-kilter beauties: the wiry, captivating bullfighter played by Rosario Flores in "Talk to Her," the fabulous-looking Rossi di Palma in "Women on the Verge of a Nervous Breakdown." Maybe Almodóvar figured it was time to make a picture mostly about men. Still, it's a drag that "Bad Education" lacks a woman's touch.