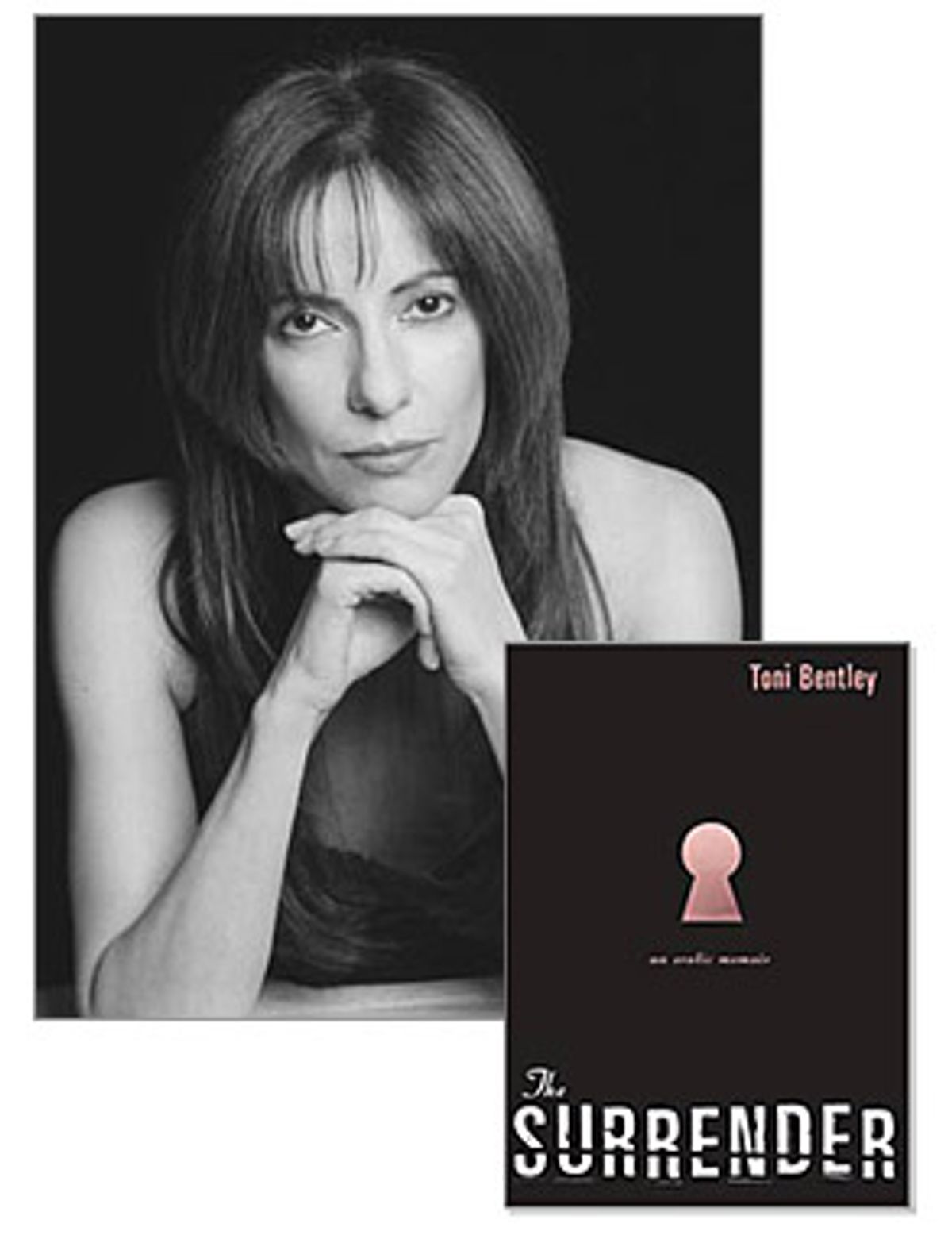 As a young woman, Toni Bentley danced with the New York City Ballet, and made a second career writing well-reviewed books about it. She knew George Balanchine and co-wrote Suzanne Farrell's autobiography, and she can delicately describe the agony of toeshoes and the psychological rigors of the barre. Now she has turned her literary attention to another activity that stretches body, mind and psyche: sodomy.

In addition to enjoying the physical act itself -- which she finds "unwinds" the lower bowels -- the atheist Bentley insists that she found a spiritual ecstasy in buggery. She has been to the mountain and seen God; and apparently, He likes it from behind. Despite her mad love for A-Man -- evidenced in no small part by the fact that she keeps the condoms-and-K-Y detritus of their unions and a baggy-full of his pubic hair in a little memory box -- Bentley staunchly resists a traditional commitment to him. The lovers do not meet outside the bedroom: no monogamy, no dating, no shared friends, no movies or meals. In fact, the only food they consume together is the occasional restorative snack between back-door intrusions. By the end of the book, A-Man is history, and leveled Bentley is left to sort out her altered body, desires and devotions.

You want the technical description? I use explicit language in the book, in a literary context, but using that language out of context can be disheartening to me.

It's true. I am a regular woman. I don't want lots of pain, lots of bleeding, and I certainly don't want lots of shit everywhere. You can help by being extremely hygenic, having good digestion ... But no, there was absolutely zero shit factor. If there had been I wouldn't have done it.

Now, I don't think that's true for all people. Some people are even into it being not like that. But I am bearing witness to my own experience and saying that it can be the way it was for me. All those gross-out factors were completely absent.

Yet I had the most transcendent sexual experience from going there many times. I started reading about it ... It started making so much sense: the contradiction of [going] in the back door. That Oscar Wilde line about being in the gutter but looking at the stars. It was also about not being a snob, of not thinking, I won't go there. It's vulgar. Balanchine believed in putting yourself out there and when I danced, I couldn't do that. I was too shy and modest as a dancer.

First of all, the g-spot can absolutely be stimulated from your ass. But to me it's much more than that. There is a great deal more trust. Because it could hurt, it could hurt like crazy. You have to be willing and open-minded in a way you simply don't have to be with vaginal sex. It's pretty easy for a guy to get in [a vagina] whether a woman wants it or not.

I would rather not talk about my personal life.

But you write in the book about your unwillingness to ask A-Man to commit. If you loved him so much why didn't you want to make him a committed, monogamous part of your life?

I considered all of these things. I learned things about the magic we had between us. What creates that magic is very complex ... And it only got better. [A-Man and I] discussed this: How come time 250 is better than time 249? Most committed, monogamous relationships are good for a week or six months, or if you're really lucky six years. I did not have any girlfriends who were having as reliably and transcendentally good sex as I was. And if we had a conventional movies-and-dinner relationship, I thought we would lose the magic.

I am not selling this type of relationship. I had a long and monogamous marriage to a man I loved very much. It didn't work out, and my disappointment was unbelievably huge ... I didn't want the same kind of heartbreak again. With A-Man, the sex never went bad. To me that's some kind of victory. My tolerance for certain kinds of disappointment is very low and will probably never improve. So perfection is what's strived for. That's from ballet. I saw it manifesting itself while watching Suzanne Farrell ... Transcendent things can happen in life.

But you did experience devastation when your relationship with A-Man ended?

You cannot go that high without going that low. I was devastated, but I survived. It lasted an incredibly long time at an incredibly high level. I took a huge risk with him in not being monogamous, and got extreme and incredible sex that made all other sex incredibly profane in comparison. We had sacred sex.

But now that you're not having sacred sex anymore, is all other sex still profane? Do you enjoy vaginal sex?

Do you think feminists are going to be ticked off by your book?

My book owes everything to the feminist movement. I am a product of that. I am a woman who had this experience that was very unconventional ... I am interested in my sex: in experiencing it and in the powers it holds for me. I am interested in our freedoms: You're a woman and I'm a woman having this conversation about this kind of book -- this is fantastic! But I think some women will protest the obvious things that I am talking about: submitting or surrender. I say feminism gave me the freedom to submit. Isn't this what we all want from feminism? The ability to choose conventional monogamy is a great option but not the only option.

And my ability to submit -- I wouldn't have been a woman who could have done that even 10 or 20 years ago.

I tried what most women do: monogamy. I have never been unfaithful to any man who thought I was being faithful to him. It's a point of integrity for me.

There were limitations, yes. We didn't have a commitment, but what that means I don't know. Most people who have a commitment don't have what we had, which happened incredibly consistently until we ended it. I have a great dislike for relationships [where] you get so close you start yelling and screaming at each other, blaming each other. He and I never did that. I would have never yelled at him; he would have never yelled at me.

You write that submitting to A-Man brought out your femininity. What is feminine to you? What is masculine?

I suppose I think of it in terms of energies; all men and women have both masculine and feminine energies. The feminine side in a man or woman is the more open, intuitive, feeling, sensitive, vulnerable, receptive side. And the male side in both men and women would be the more aggressive, analytical, penetrating, knowledgeable, intellectual side.

In relationships it's about how people play off each other. A very feminine woman and a very feminine man -- maybe you should go off and be gay. I don't believe you are going to be able to have fantastic sex that way. You need polarized energies. Of course if a man is 100 percent masculine they're sort of Neanderthals and you can't talk to them. But in my relationship with A-man where I became my most feminine sexually, he was the most masculine of anyone I'd ever been with. I wanted him in control, which was an incredible relief to me.

The huge problem is you cannot give just anyone control. To give that up to some guy? On the whole you'd be a fool. He has to be trustworthy.

But it was the biggest relief I ever felt. Obviously I am an intelligent woman, a successful woman. I have written all these books, danced for George Balanchine. I know all about control and the ultimate act for me is to be able to give that up. It was the greatest gift to me to be able to be some kind of melting essence and not have to control the situation, not have to dictate, not have to be on top technically and otherwise.

I do not believe in the abuse or humiliation of animals. They are noble, natural, innocent creatures who should not be abused by humans doing their thing sexually. Otherwise, I am open-minded. Beyond the animals. If that's your thing, that's your thing, as long as it's consensual.

It sounds more like lowering expectations than demanding perfection.

It is about making expectations lower. The idea being, let them be who they are without trying to change everything. Just try to let all the good exist and don't go where you'll be disappointed. If I wanted a full-on, monogamous, going-on-vacation relationship with the masseur, it wouldn't have worked. I probably would have been in pain and disappointed and incredibly angry with him, which isn't pleasant for me, and not loving to him.

Can you talk a bit about the connections you make in the book between being anally penetrated and finding God?

This act took me to a place emotionally and mentally that I would call of a spiritual realm. The best way to say it is that I went beyond my own ego, and most of us are mired in ego 24/7: all the constant self-criticism, self-love, self-loathing.

While having this kind of sex [with A-Man] I went beyond this voice in my head and beyond all control. And I write in the book, beyond control lies God.

The other way one can talk about this is, I was profoundly, profoundly in love with this man.

It's not that I want to hurt. I don't want to be in pain, emotional or physical, more than anyone else. But I do have a deep connection to pain, both as a dancer and -- how can I explain this -- it's really hard to explain. I won't let a guy near me who doesn't treat me like a queen, I can promise you. Yet to be very submissive, to have this kind of sex act repeatedly with this man. One can call that masochistic. But there was zero bad about it.

I was more vulnerable with him than I'd ever been with anyone else. That's also why it was so painful at the end. I really went very, very deeply into vulnerability and that dark side because I trusted him.

The other thing about masochism is that if it is defined as being intensely receptive and open, then that is going back to male/female traits, because that is a feminine place to be -- to be the ones who get penetrated vaginally or otherwise.

But your argument that you were feminine falls apart when you consider that you took these acts and wrote them down and are talking about them now: an analytical, intellectually penetrative act that you would ascribe to a masculine energy.

That's true actually. Here I am with this book ... the phallic pen and all that. Who knows, it's possible I went so deeply into my submission that a strange balance brought out the other part. It's very possible that in many ways writing was counterbalance to the vulnerability and the way I kept control.

Also, you know we all have that question: Who's on top, who's on the bottom, who's in control?

In S/M, they say the bottom is in control.