Billy Crudup explores his feminine side and Claire Danes proves she's all grown up in this charming, billowy entertainment. 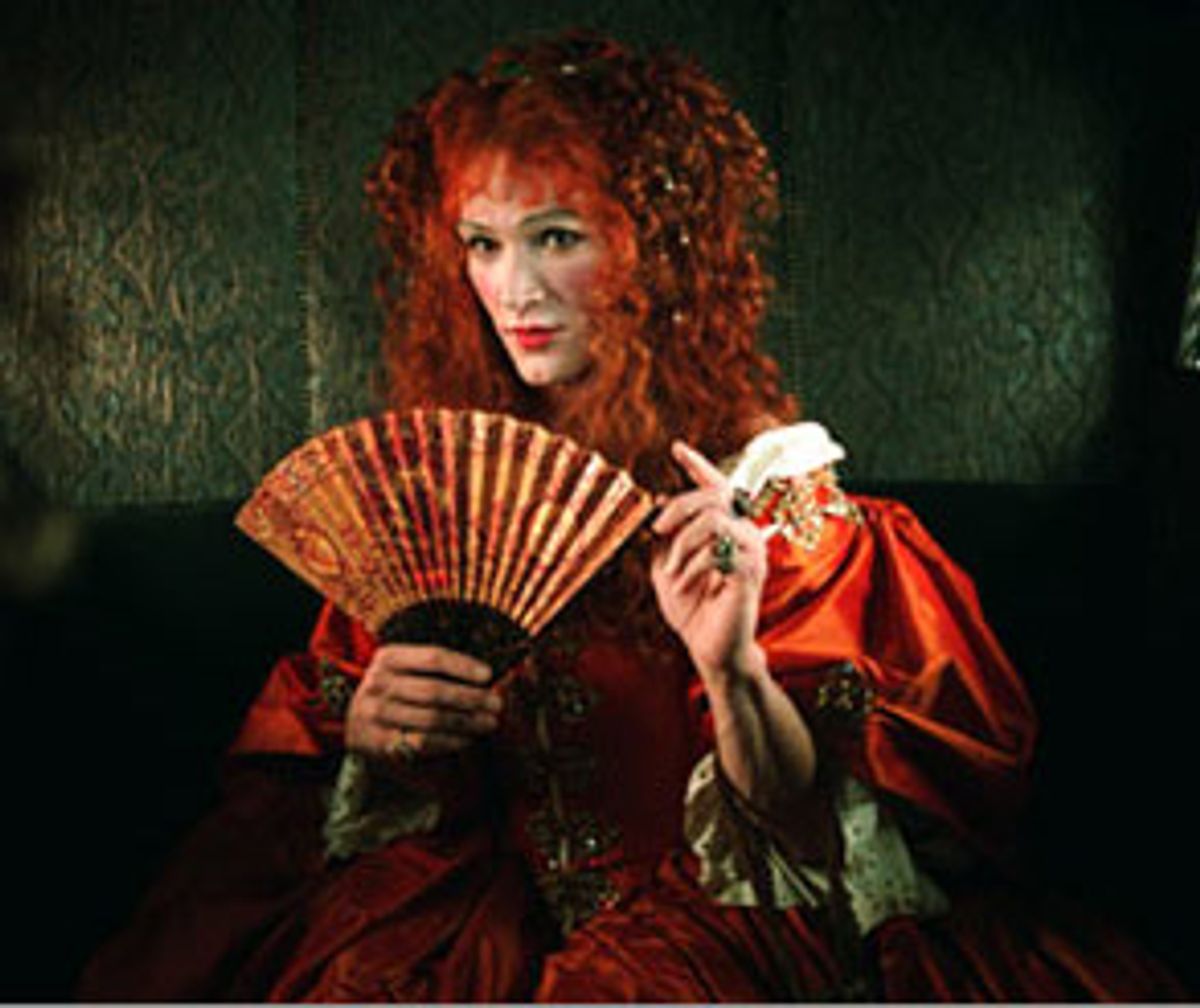 I once knew a theater critic who claimed he disliked actors -- to him, they were all arrogant, raving egotists. The idea of a critic disliking actors is akin to loving sausage but refusing to acknowledge that some poor pig had to die for it.

Acting, done right, can be the most terrifying kind of emotional work. Vulnerability and insecurity, often marbled through with arrogance and self-centeredness, are part of the actor's game, but they're also among his most necessary tools -- and he's the one who has to lug them around when the cameras are off or the footlights are out. We may find actors annoying when we hear them drone on about themselves. But if that's the price I have to pay to get one Olivier, one Brando, or one Gish (or even two), I'll gladly pay it, plus the price of a ticket.

"Stage Beauty," the noted theater director Richard Eyre's second movie, is an entertainment as billowy as a Shakespearean nurse's sail-shaped hat. The picture glows with ideas -- it charms us into thinking, instead of poking a stick at us as if we were a badger in a hole (the image that always comes to mind when I hear the term "thought-provoking"). And it's deeply perceptive about what good actors do, without resorting to theatrical platitudes.

"Stage Beauty," adapted by Jeffrey Hatcher from his play "Compleat Female Stage Beauty," takes place in Restoration London, at the tail end of an era in which all female stage roles were played by men. In the picture's semihistorical universe, women are prevented by law from acting onstage, but they're not necessarily missed: Some of the male actors who don wigs and dresses do such a fine job impersonating the fair sex that the men in the audience become enchanted with them.

The lead peacock among those actors is Ned Kynaston (Billy Crudup), a 17th century actor who became renowned for his great beauty in stage drag. (Samuel Pepys wrote of one performance in which, dressed in women's clothes, Kynaston "was clearly the prettiest woman in the whole house.") Kynaston has spent years in pursuit of ultimate feminine beauty, or, more accurately, the illusion of it. When he plays Desdemona to Tom Wilkinson's Othello, he thrashes a bit on the bed, prettily, before succumbing to the great beyond -- the coda to his death scene is a precise, if graceful, flourish of the hand, one of the many cartoonishly feminine gestures he has rehearsed to perfection, as if repetition of learned cues could somehow turn you into the exquisite creature you always wanted to be.

Kynaston loves the stage, and the attentions of the male and female groupies he attracts. But offstage, his identity is fragile. He feels most himself when he's playing a woman, done up in petticoats and girlish wigs, his lips rouged to an unnatural pout.

What makes Kynaston, as Crudup portrays him, so sexually alluring is that beneath the makeup, he looks vulnerable in a specifically masculine way. If the softness of woman is designed to invite tenderness, Crudup has an angular jaw you could crack with your fist. A gentleman never hits a woman, which offers her at least some form of protection. But a man trying to protect the woman within -- even as he's trying to draw her out, for the sake of his performance -- is completely exposed. Crudup understands that in his bones -- when his Kynaston is in drag, he walks like a woman imitating a man instead of the other way around, as if he believes he needs to rough up his impeccable learned daintiness in order to make it seem real.

Men in the audience may swoon for Kynaston -- he has a regular beau, George Villiars, Duke of Buckingham (Ben Chaplin), who often drops by for after-show delight -- but there is only one person who has the potential to understand him from all angles: Maria (Claire Danes), his dresser, both longs for him romantically and yearns to take his place onstage, if only that were allowed. He flirts with her, innocently, having no idea what she feels for him. She watches him rehearse alone on a darkened stage, admiring his gestures even as she mimics them exactly, having studiously learned every one: She's his Helena and his Eve Harrington rolled into one.

Maria borrows Kynaston's props and costumes at night and runs off to perform the role of Desdemona herself, in a thrown-together production in a seedy tavern -- the Restoration equivalent of underground theater. But before long, her cover is blown. When, at the urging of his mistress, the bodaciously pleasing Nell Gwyn (played with curvaceous audacity by newcomer Zoë Tapper), King Charles II (Rupert Everett) makes a decree that men shall never again play women on the London stage, Maria becomes a star. And Ned Kynaston not only loses his livelihood, but audiences forget they ever cared for him in the first place -- perhaps the cruelest injustice you can inflict on an actor.

Good theater directors usually know a lot about how to work with actors, but their vision doesn't always translate to film. Eyre doesn't have that problem: He recognizes that a movie screen isn't 2-D but infinitely, sometimes maddeningly, multidimensional in terms of the layers of detail you can add -- he doesn't clutter it with too many or give it the impoverished, deprived appearance of having too few. His Restoration London is none too clean, and yet cinematographer Andrew Dunn takes care not to make it too dismally grimy, either. And he has fun with the occasional telling detail, including, in a bustling street scene, a fine graphic depiction of a "steaming heap." (If the term is a cliché now, it hasn't always been.)

Eyre captures the mood of late 17th century London, or at least what we want to believe that mood was like, with his colorfully dappled mix of characters. Hugh Bonneville (who played the young John Bayley, marvelously, in Eyre's first movie, "Iris") shows up as a fiddling-and-diddling Samuel Pepys, always lurking in the shadows with his furtive scribbling -- the kind of nuisance nobody ever wants to have around but sure is grateful for 350 years later. And Everett, in his country-music-star wig and devilish mustache, makes a dashingly swishy Charles II. He may swan about, but it's screwball swanning: He's a vision of over-the-top splendor as he strides down palace corridors, his famous spaniels dustmopping madly around his legs.

"Stage Beauty" is great fun, but it's fun with an air of melancholy about it. It's a love story woven of frazzled golden threads, one in which happiness for the two lovers is anything but guaranteed. Danes and Crudup are wonderful, both together and apart. Danes -- who, not so long ago, gave us the most moving screen Juliet we may ever see -- is maturing as an actress without becoming harder or sharper. She hasn't lost that teenage softness of hers, and perhaps she never will -- her features still have that quality of rubbery vulnerability.

Even so, Danes cultivates a fierceness here that we haven't seen in her before. Maria, sensing how lost and troubled the deposed Kynaston is, rescues him from the life of debasement he's sunk into. She spirits him away to the country, where they shack up in a cozily spacious cottage. That's the setting for one of the movie's loveliest scenes: Finally recognizing that she can't wrest Kynaston into the role of the man, she looks to him to find out more about being a woman. She seduces him, gently ("I've never been with a woman -- except myself," he tells her, a funny line you can't bring yourself to laugh at), and together they try to figure out what makes a man a man and a woman a woman. She straddles him authoritatively, looking down at him; he slips beneath her, melting under her gaze. "Who am I now?" they repeatedly ask each other, a question they're no closer to answering by the end of the scene (or the movie) than they were at the beginning.

Kynaston is often deeply unlikable, but we care desperately about him. Crudup pushes the limits of our patience with his depiction of Kynaston's sourness and jagged desperation, but we still feel protective of him. When, challenged to deliver a few of Othello's lines before the king -- dared, in other words, to be a man -- his masculinity (which is as much a part of him as his womanliness) fails him. We feel his horror and his shame as much as he does.

In the end, Maria doesn't really teach Kynaston to be a man any more than he teaches her to be a woman. But they unveil for each other an essential truth: Men and women are historically at odds, but the best parts of us often seem to belong to the opposition. Which means that to be our best selves, in bed or anywhere, we can't always be defined by what's between our legs.

And right there, maybe, is one of the great secrets of acting, one that "Stage Beauty" points toward. To become another person, you don't necessarily have to know yourself, which is just one of the ways in which acting is a dangerous profession. But the better you know yourself -- including the parts that belong to the opposition -- the braver you can be when it comes to unsheathing your feelings. "A woman playing a woman -- where's the trick in that?" Kynaston asks indignantly in "Stage Beauty," and he's right in that it's no trick at all.

The final question of the movie, one that Maria poses to Kynaston, is "Who are you now?" His response is almost giddy with helplessness: "I don't know." The only certainty for Maria and Kynaston is that it's a mixed-up, mumbled-up, shook-up world. Sometimes the only thing that makes sense is a man in a dress.