Voter registration is exploding in the swing state, but a ruling by the obstructionist Republican secretary of state may result in thousands not voting. 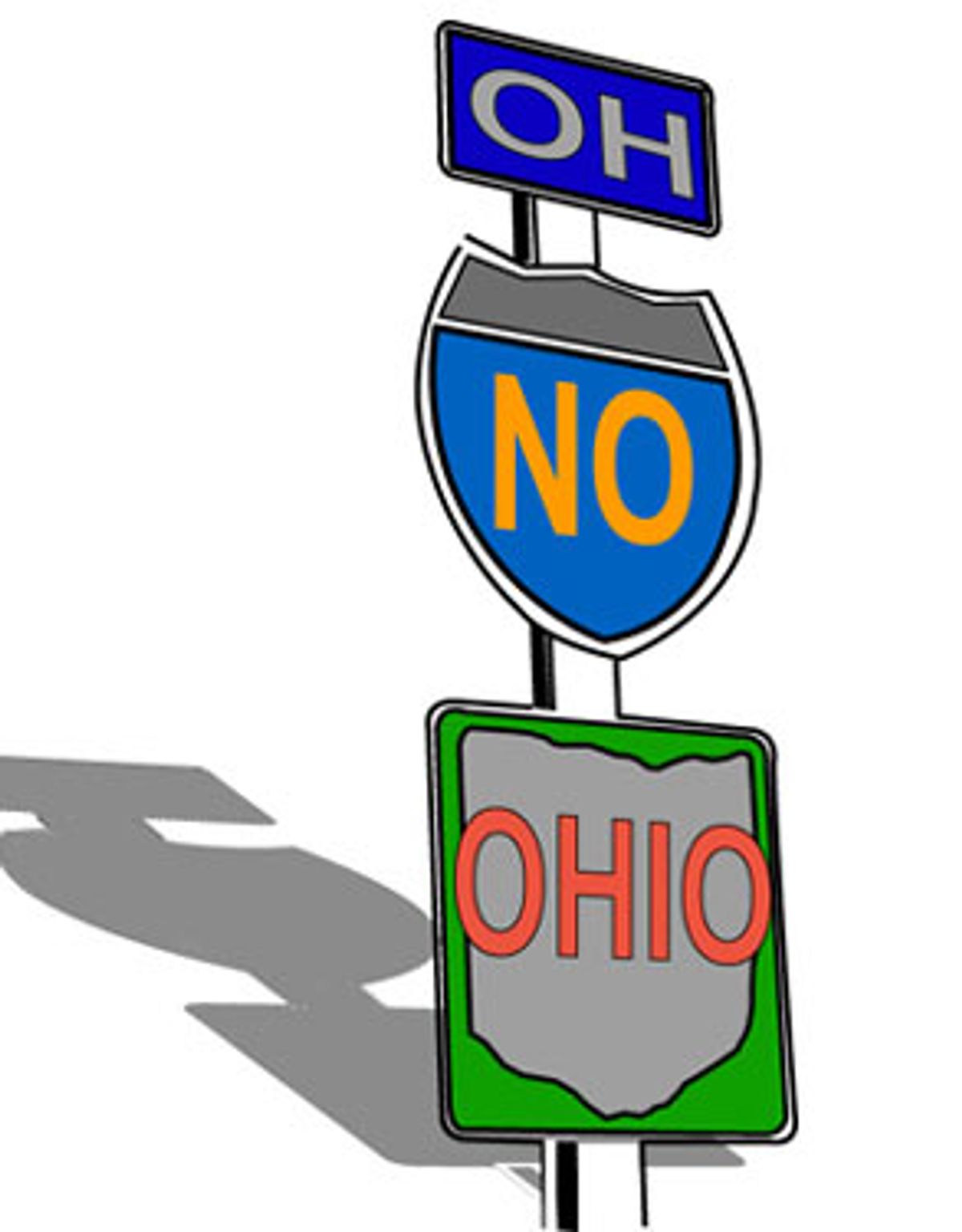 On Monday, the final day of voter registration in Ohio, the Board of Elections in Cleveland had a line out the door. "I've never seen anything like this in my life," said John Ryan, head of the Cleveland AFL-CIO. "We did a voter registration drive four years ago. We turned in 14,399 new registration forms, and we were pleased with that. This time, there are about 100,000 newly registered voters. That blows my mind. This is not Arizona with a growing population. People are leaving this area, not coming in."

That people are moving to other states is due in no small part to the fact that Cleveland is now the poorest big city in the country, with a poverty rate of 31.3 percent, according to a recent Census report. The rest of Ohio isn't faring much better, with poverty rates in Cincinnati at 21.1 percent, Toledo at 20.3 percent and Columbus at 16.5 percent. For those who can't leave, voting seems to have taken on an urgency not seen in many years, if not decades.

With the registration deadline past, the focus for the numerous groups in Ohio that are working to mobilize voters has now shifted to making sure those voters get to the polls and, once they get there, are able to vote. Conventional wisdom has always held that the hard part is getting people signed up and to the polls. But with millions of dollars being spent by groups such as America Coming Together, MoveOn PAC, 21st Century Democrats and others on such efforts, a more important problem may be getting those votes counted -- a fear given definite shape thanks in no small part to Ohio's obstructionist Republican secretary of state, Kenneth Blackwell.

While there had been a lot of hand-wringing among elected officials, voting rights groups and the public over electronic voting, Ohio passed a law in May requiring that all new machines have a paper receipt by 2006. This, of course, won't occur until after the 2004 presidential election, but the change has had a deterrent effect on a switch to electronic voting machines. According to Petee Talley, who is chairing the Ohio Voter Protection Coalition, made up of labor, civil rights, voting rights, retiree and community organizations: "Ninety-five percent of Ohio's voters will be voting on the same equipment they did the last time."

So, befitting the state's anachronistic Rust Belt economy, tactics have turned to good old-fashioned voter suppression and intimidation rather than high-tech tampering. In a recent campaign stop in Cleveland, Sen. John Kerry suggested that such intimidation was already underway. His comments came on the heels of Blackwell's backpedaling on his decision to enforce an archaic law requiring that all new registrations be on postcard-weight paper. But it seems Blackwell may have several more tricks up his sleeve.

"What's happening in Ohio," says Talley, "is that the secretary of state has issued a statement saying that provisional ballots should not be issued if voters are in the wrong polling location." With tens of thousands of newly registered voters, confusion about where to go is likely. Withholding provisional ballots -- which the Help America Vote Act, passed in 2002 in the wake of the 2000 election debacle, specifically mentions as an alternative voting method when valid registration is in doubt -- will result in many people simply not voting.

We "sent a letter to the secretary of state saying that it's a violation of the Help America Vote Act," says Talley. Not getting an adequate response, the Ohio Voter Protection Coalition filed a lawsuit on Tuesday. The Ohio Democratic Party has already sued on this issue, and a judge is expected to issue a ruling on that suit by Oct. 15.

Provisional ballots might seem like small potatoes in the scheme of things. But one professor at Case Western Reserve University -- site of the recent vice presidential debate in Cleveland -- has crunched some numbers and he's not at all convinced this issue is of little consequence.

Using data from the 2000 election, the professor, Norman Robbins, calculates conservatively that as many as 13,000 Clevelanders will have to use a provisional ballot as a result of clerical and other errors. The typical discard rate for provisional ballots means that nearly 2,300 of those will be invalidated. But this doesn't include all the people who show up at the wrong polling place and don't get a provisional ballot at all. Multiply this by the eight urban areas around Ohio and the potential for disenfranchisement is high. Considering that Al Gore lost Ohio by 165,000 votes and Ralph Nader (who will not be on the ballot) took 117,857 votes, it could impact the election not just in Ohio, but affect the outcome of the national race.

"Who does this provisional ruling affect most?" asks Robbins. "People who move. Census data shows that low-income people are 90 percent more likely to move. If you're poor, you're twice as likely to have to vote provisionally. On top of that, when they get a provisional ballot, they're likely to encounter [poll workers] who give them unclear information on a complex form. That's already difficult.

"Now, if you're in the wrong precinct, don't bother voting because your provisional ballot is going to be thrown out, even if it was a clerical error that got you into provisional world. These are the people who are most likely going to have two jobs. They're not going to be able to go to another poll. They might have kids in day care. They may have no car. This ruling disproportionately targets one part of the Ohio population." And they are, needless to say, most likely Democratic voters.

Ohio's secretary of state was also sued because 21 counties were wrongly informing ex-felons that they had no right to vote. According to Robbins, the secretary of state's office agreed to inform all ex-felons of their voting rights in time for the registration deadline, but then backed out based on a "distorted" interpretation of the law.

And then there is the specter of hanging chads if the race in Ohio is close enough to trigger a recount. Sixty-eight counties in Ohio (out of 88) will vote using punch card ballots. (In fact, it was little noted at the time, but Cleveland also had its very own butterfly ballot in 2000, and it was as poorly designed as Theresa LePore's in Palm Beach County, Fla.). Again using the 2000 election as a guidepost, Robbins says punch card ballots have nearly a 4 percent error rate. With some 300,000 voters in Cleveland, that's nearly 8,000 lost votes, factoring in the turnout rate. He is critical of Blackwell for doing very little to educate voters about how to use punch card machines, and points to Los Angeles as having undertaken a model educational campaign that greatly reduced the error rate.

"In 2002, the Federal Election Commission said that these error rates were unacceptable," says Robbins. Blackwell "knew the majority of counties would be using punch cards, and he'd done nothing to improve that situation until a week ago. What they're doing now is good, but it's very late in the day and he had to be badgered into it."

Blackwell has defended himself and his office by saying that these criticisms did not surface until recently. But Robbins says the voter coalition he's been working with sent letters to Blackwell on July 29 and again on Sept. 2, pointing out the problems and making suggestions.

Finally, of course, there is the specter of voter intimidation, something that -- until Florida 2000 -- some people didn't believe ever happened in the United States, even though it occurred not only during the civil rights movement but has been going on covertly since Reconstruction after the Civil War.

"As someone who's worked in Democratic politics in Ohio, I've seen these tactics done for years," says Mike Casey, who runs Tigercomm, a media consulting firm in Cleveland, and is working with a newly established group called Citizens Against Un-American Voter Intimidation. "Every election cycle, you hear after the fact about the white sheriffs who sat there for five hour with guns holstered who are there to intimidate. They're there to shave 1 percent off. With all this voter registration activity going on, some people don't want those people to vote."

Given a recent alarming report by the NAACP and People for the American Way, the Ohio Democratic Party's cavalier attitude may be misplaced. Citing intimidation tactics outlined in the report, such as sending security teams to minority polling places, wrongly demanding I.D.'s and taking photos of voters, the New York Times concluded, "The suppression of minority votes is alive and well in 2004, driven by the sharp partisan divide across the nation. Because many minority groups vote heavily Democratic, some Republicans view keeping them from registering and voting as a tactic for victory -- one that has a long history in American politics."

"Basic democratic rights are being tampered with by political thugs," says Casey. "Think about that. It's the most un-American thing you can possibly do, besides spy for al-Qaida. So we're trying to pay heightened, advanced attention to things that rarely surface until Election Day. It's after everything is decided [that] some evidence comes to light, and there's some reporting by an exhausted press corps, but it's already over. If you don't call attention to it beforehand, to hold people accountable, then this activity pays."