Kerry wins on points, but misses the knockout

After a disastrous week, Bush is wobbly but still standing. 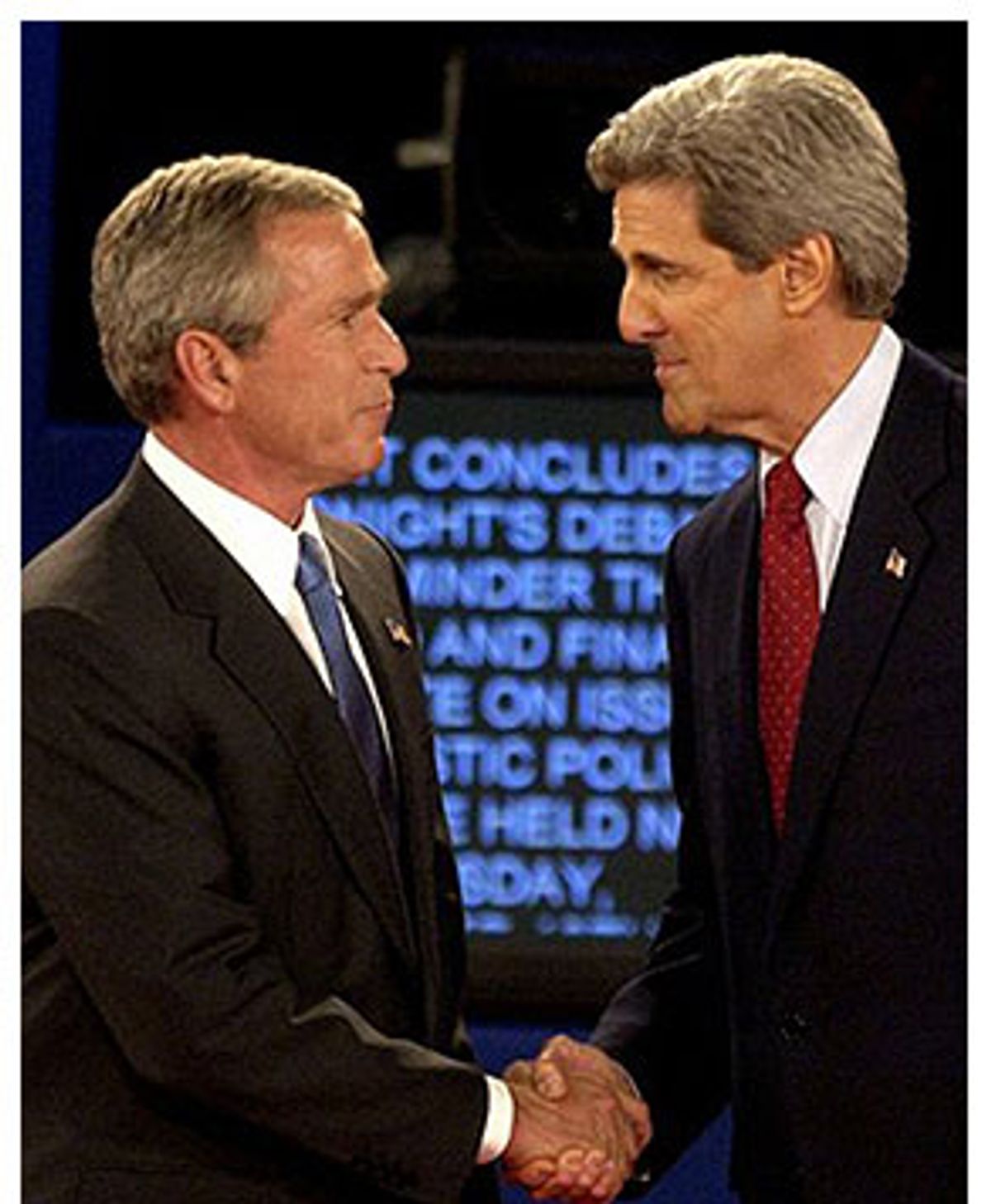 He was in denial on Iraq. His sharpest line of the night might have been false. He winked and he shouted and he stormed around the stage like a house afire, but when a woman asked him to name three mistakes he'd made, he spoke so softly he was almost inaudible, said he'd take responsibility if historians ever find that he made some tactical errors, and then blamed -- without naming names -- some of the people he had appointed.

It wasn't a great night for George W. Bush, but it might have been good enough.

After his stammering and scowling performance in his first debate with John Kerry, Bush might have won the second debate just by getting through it without cussing out an undecided voter. But he did better than that Friday night. He spoke in complete sentences, he offered coherent thoughts, and he survived a week of bad news that might have sunk a man more firmly lashed to reality. Two nights into this thing, Bush is still standing.

John Kerry won Friday night's debate on points -- two network instant polls gave him a slight edge -- but he also let Bush back in. Bush was staggering coming into the second debate, bruised on jobs, bloody on Iraq, but Kerry never found a way to put the boot in. Too often, he fought on Bush's turf, wasting precious time defending himself against the flip-flop charge when he could have been nailing Bush on his record.

Early on, Bush tried to spin his way out of Charles Duelfer's devastating report on Iraq's nonexistent weapons of mass destruction. Bush said Saddam Hussein was a "unique threat" because "he could give weapons of mass destruction to an organization like al-Qaida" -- despite the fact that the Duelfer report establishes, once and for all, that Saddam didn't have any weapons to give. The president then suggested that the report offered an alternative justification for the war: "Saddam Hussein was gaming the oil-for-food program to get rid of sanctions."

Kerry might have hammered him for it: "Mr. President, are you saying we went to war because Saddam Hussein was 'gaming' the oil-for-food program?" Instead, Kerry used the opening to defend himself against the flip-flop charge. "Well, let me tell you straight up," he said. "I've never changed my mind about Iraq. I do believe Saddam Hussein was a threat. I always believed he was a threat."

Score one for Bush. He said something implausible, something laughable, and Kerry not only let him get away with it, he reminded voters of what they don't like about him in the process. Kerry communications director David Ginsberg said the candidate made a conscious choice to attack the flip-flopping "caricature" that the Republicans have drawn of him. It might have been a good strategy for the first debate, where Kerry had to establish himself as presidential, but it's harder to understand in the second debate, when that basic burden suddenly seemed to be on Bush. Kerry came off as presidential in the first debate, and he did it again in the second. But by failing to go harder after Bush Friday, Kerry let the president seem presidential again, too.

That said, while Bush may have gotten himself back over the "presidential" threshold Friday night, he did little to distinguish himself. With bad news coming at him from all directions, the president frequently came off as either oblivious or willfully ignorant. In a week of car bombings in Iraq, dire safety warnings within the Baghdad Green Zone, and another beheading, Bush told the tale of meeting the Iraqi finance minister, who thought everything was going swimmingly in his country until he "turned on the TV and listened to the political rhetoric." Faced with September job numbers that were lower than expected, lower than needed to keep up with population growth and way, way lower than his own Council of Economic Advisors projected just last year, Bush could say only that the country would be better off if the Senate cracked down on trial lawyers and passed Dick Cheney's energy bill. The economy is "growing," Bush said, and "freedom is on the march."

Before the debate began, the Kerry campaign passed out rose-colored glasses to reporters in the media center here. Kerry spokesman Mike McCurry spoke of Bush's "stubbornness" and "arrogance" in refusing to deal with the reality around him, and he said more and more voters are starting to see it. "What's happening now is it's migrating from the base -- which believed that passionately for a long time -- and it's beginning to seep over into less partisan people," McCurry said.

The Bush arrogance was on full display Friday. Late in the town hall-style debate, a voter asked Bush to describe three mistakes he had made as president. Bush couldn't even think of one. He said he was right to go to war, that he was right to cut taxes. He finally confessed that he "made some mistakes in appointing people." Did he mean Donald Rumsfeld and Condi Rice, or did he mean Colin Powell and Paul O'Neill? Or appointees "to boards you never heard of" that Bush mentioned early in his answer? Bush didn't say. He was happy to pass the buck to his underlings, but he wouldn't say who they were.

And the few times Bush did get specific Friday night, he frequently fell into the falsehoods that have marked so much of his reelection campaign. Bush claimed that Kerry would raise taxes on 900,000 small business owners. The charge is false; Bush's calculation assumes -- incorrectly -- that anyone who reports certain kinds of income or losses is a "small business owner." Kerry pointed out Bush's error and explained that Bush's definition of "small business owner" was so broad that it would include the president himself because he owns an interest in a timber company. With a moral clarity that echoed Dick Cheney's insistence that he'd never met John Edwards, Bush said: "I own a timber company? That's news to me." But according to Annenberg's Factcheck.org, Bush held a partial interest in a timber company and made $84 from it in 2001 -- enough to make him a small business owner under his own broad definition of the term.

Bush accused Kerry of voting to raise taxes 98 times, and he insisted: "These aren't made-up figures." Actually, they are. According to the folks at Annenberg, 43 of the 98 "tax increase" votes were actually votes on budget resolutions that did not, in and of themselves, raise taxes. Moreover, the 98 include multiple votes on the same piece of legislation: By Bush's math, Kerry's support for President Clinton's 1993 deficit reduction package as it wound its way through Congress should count as 16 separate votes to raise taxes. Kerry gets dinged six times for a single 1996 budget resolution, seven times for a 1997 budget resolution, and six more times for supporting Sen. John McCain's proposal to raise the cigarette tax.

But it's complicated stuff, the truth, and the kind of voters who haven't decided on a presidential candidate yet probably aren't digging through Bush's tax return or Kerry's voting record to figure out what's what. Bush might have made some progress with those voters Friday night. He was confident and reasonably clear -- at least by his standards -- and he replaced the scowls with slightly more endearing blinks, winks and laughs.

And yet Bush still came off sometimes as a little unmoored. Why was he winking at someone in the audience when Kerry was talking about nuclear proliferation? Why did he giggle when Kerry was pounding on him for rushing to war in Iraq? And what did poor Charlie Gibson do to warrant Bush's going off on him early in the debate?

Except for the giggling, Bush did manage to keep himself composed when Kerry took him to task. Kerry was good at that at times Friday night, especially when he got around to challenging Bush on the Duelfer report. When Bush said that U.N. sanctions weren't working and that the United Nations "was not effective at removing Saddam Hussein," Kerry explained: "The goal of the sanctions was not to remove Saddam Hussein. It was to remove the weapons of mass destruction. And Mr. President, just yesterday the Duelfer report told you and the whole world they worked. He didn't have weapons of mass destruction, Mr. President. That was the objective. And if we'd used smart diplomacy, we could have saved $200 billion and an invasion of Iraq. And right now, Osama bin Laden might be in jail or dead. That's the war against terror."

Later, Kerry made his best case yet for how Bush rushed to war -- and for how he would have done things differently. "The president just arbitrarily brought the hammer down and said, 'Nope. Sorry, time for diplomacy is over. We're going,'" Kerry said. "He rushed to war without a plan to win the peace."

Bush had no response. He changed the subject to Paul Bremer's charge that Bush failed to send enough troops to Iraq. Rather than accept responsibility, Bush blamed "Tommy Franks and the generals on the ground." Kerry shot back: "You rely on good military people to execute the military component of the strategy, but winning the peace is larger than just the military component ... A president's job is to win the peace."

But before Kerry can execute any of his plans, he's got to come up with a plan to overtake George W. Bush. He made huge progress in the first debate, and a week's worth of bad news for Bush has been good news for Kerry. But the bad news won't last forever, and neither will the campaign. Kerry gets his last clear shot at Bush Wednesday night in Arizona. He'd better be ready to take it.