In "The Plot Against America," the great novelist imagines a 1940s America devoured by anti-Semitism -- ignoring the brutal anti-black bigotry that actually existed. 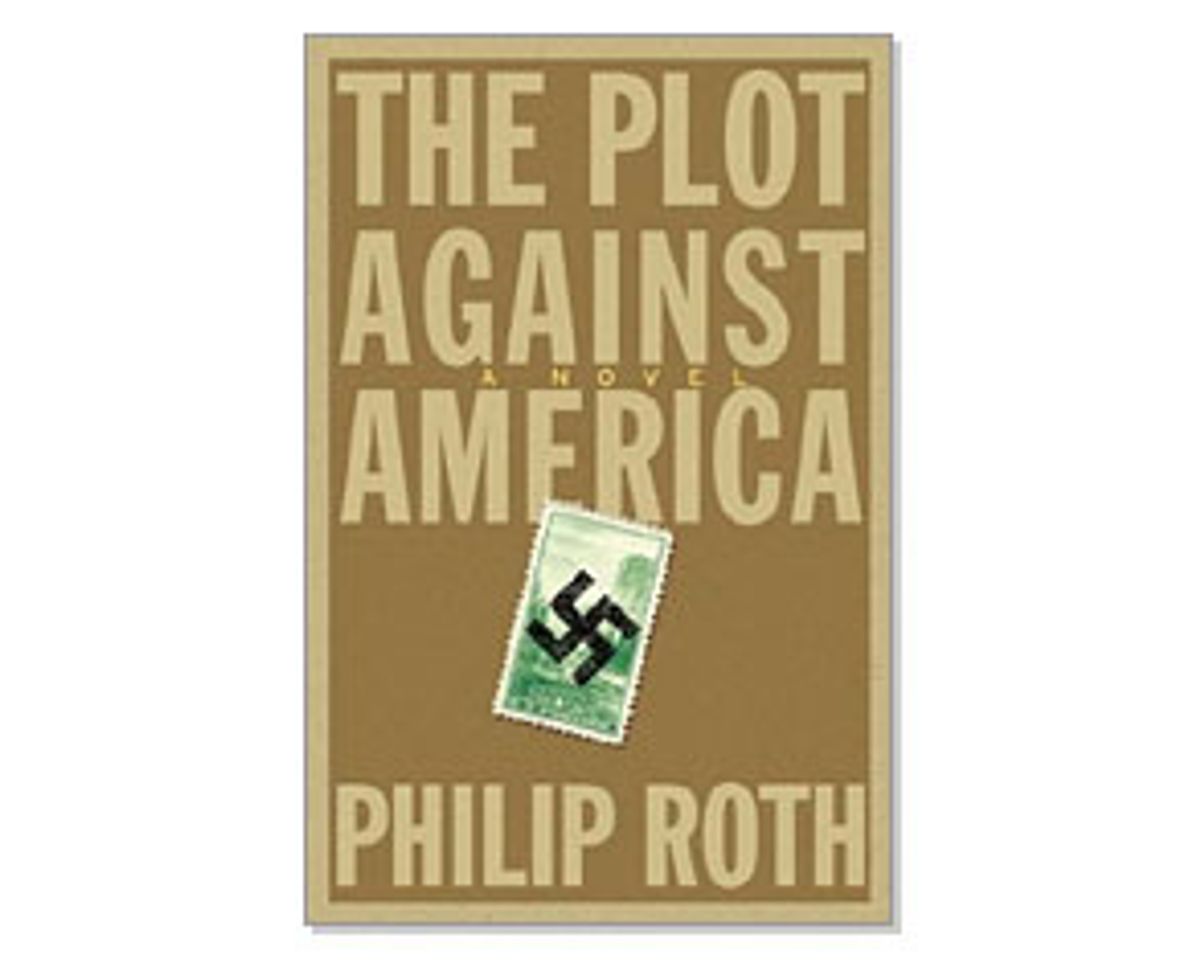 "Both men continued to swear their innocence, but McDaniels ultimately broke down, his screams sending children scurrying to their mothers' sides. Once he'd confessed to the crime he was shot to death. Townes had his eyes gouged out with an ice pick and then was slowly roasted with the torch until he, too, agreed to confess. When he finally uttered the words the mob wanted to hear, he was doused with gasoline and set afire. Souvenir hunters would fight over severed testicles and strips of barbecued flesh."

-- David Levering Lewis, in a 2002 review, quoting Philip Dray from "The Lynching of Black America," where the typical denouement of a double lynching in the Mississippi Delta in 1937 is described.

Great artists can commit great sins of monstrous allegiance, of bigotry, of individual cruelty, but they can commit no greater sin than taking on the mantle of Alzheimer's when addressing major periods in American history. I say that because so much of what has become important in American life since the election of John Kennedy is about deepening the quality of national memory. We search through our files, our documents, our newspapers, our diaries and so on, to somehow know who and what we have been and when we were that repugnant or inspirational or duplicitous or confused. Or whatever. I say that because the subject of this essay is Philip Roth, who has committed a highly celebrated sin against history that would mean nothing if he were not one of our greatest writers, a pure flare of talent out of New Jersey.

Roth has been at war with stereotypes and the limits of assumed good behavior throughout his career. One could accuse him of thrilling at the idea of shocking the bourgeoisie or being responsible for forcing his public to know what happens when the girls slide out of their panties and the men climb out of their pants. He is our most prominent son of James Joyce, but he has also become one of our most adventurous writers in his last few fiction works. Roth is usually obsessed with the limits and the tears hidden by the compartmentalized aspirations of middle-class Jewish life, the rubber demands of the academy, and the disappointments of wealth and fame as experienced by a writer named Nathan Zuckerman, who critics are always sure is actually Roth himself.

Roth is a high-IQ jokester who delivers his punch lines with glass capsules of cyanide. He focuses on tales from below the belt and has always been most interesting, it seems to me, when he has moved into domains other than those in which he grew up or made a living before going on to receive his well-deserved celebration. He has been under attack from the dunderheads of the academy and those who do not have enough literary sense to understand that his politics did not come off the assembly line. Yet he has maintained his integrity by going his own way and taking the lumps that come of maintaining a singular vision. Roth is too intentionally crude for those on the right and too unforgiving of the laughing-gas ideology that those on the left assume should be taken seriously.

So what is Philip Roth's great sin and what does it have to do with the material quoted at the beginning of this piece? Simply this: His new novel moves along as though that bestial level of social bigotry was not a highly visible fact of American life at the time that "The Plot Against America" is imagined to have taken place, between 1940 and 1942. "Boo!" some will automatically say because the book has been so vastly praised, but they would not leap so quickly into that camp if they realized just how much the novel is now part of the ongoing complaint that Ralph Ellison raised to the level of masterpiece in "Invisible Man." Roth expects us to believe that the very deep hostility that white Southerners had toward black Americans, a hostility that had been supported by white Northerners either after the end of Reconstruction in 1877 or soon thereafter, would suddenly dissolve and transform itself into anti-Semitism because Lucky Lindy defeated Franklin Roosevelt in 1940.

This sort of simplemindedness is unacceptable from a man of Roth's gifts. Had any such thing happened, Jews would have first seen the proverbial handwriting on the wall: They would have begun to notice how much worse things were becoming for Negroes, whose communities would almost surely have been turned into actual ghettos that walled off the black population from the white. Negroes would have needed passes to get out and would have been required to return by a certain hour. One Jewish writer friend of mine says that Roth did not want to complicate what he apparently intended as a reiteration of the old song of Jewish suffering thrust in an American key. Not a good enough reason, if true. No serious writer, in the interest of simplicity, can avoid the heat and weight of a time in the past where he chooses to put his story. Another Jewish writer of Roth's generation recalls that there was always talk during those years of the Negro being "a buffer" between Jews and Christians, and that one could gauge the mood of the country by what was happening to them.

Perhaps the most unsettling aspect of Roth's novel is its absurdly reductive vision. By implication, we are given to believe that even if the hysterical racism and violence toward black people had somehow magically disappeared from American life, Negro activists, writers and firebrands such as W.E.B. DuBois, Walter White, Langston Hughes, Richard Wright, Roy Wilkins, Adam Clayton Powell Jr., Thurgood Marshall and Charles Hamilton Houston -- all of whom had repeatedly proved their moral courage by standing up to racism through their words or their actions, or both -- would have shuffled off into silence when anti-Semitism was put into policy. This adds an even grimmer substance of insult to this ethnically self-absorbed book.

The fulsome praising of this Roth novel is also a commentary on the lack of knowledge of American history by those who consider themselves literary people in our time. How could this book pass everyone at Roth's publisher without the unmentioned smell of burning flesh filling room after room until someone raised a question about the stench for which the novel had cut off its nose in order to avoid acknowledging? Let us be even more blunt: Would there be no protest if a great writer or dramatist or filmmaker were to find a marvelous story about Gypsies in German cities during the mid-1930s and create a work in which the Nazis became so hot at the Gypsies that their plight overshadowed an unmentioned anti-Semitism?

There may be an understandable -- however unacceptable! -- reason for this that goes far beyond the limitations of "The Plot Against America." Could it be that because Condoleezza Rice, Colin Powell, the Rev. Al Sharpton, the bad sportsmanship of too many millionaire black athletes, black street-gang violence, the bullshit scholarship of the worst of black studies, and the decadent, dehumanizing minstrelsy of gangster rap have created such quiet animus in our intellectual community that it is preferable to forget the savage racial history of our nation? I raise that question because in the summer of 2001, The New-York Historical Society presented "Without Sanctuary," a showing of lynching photographs that was the talk of the town, much as a similar show was when it was put on in Manhattan by the NAACP during the 1930s (some were so overwhelmed at the time that they fainted when faced with the unfathomable brutality of public murder). In November of 2002, David Levering Lewis assessed recent studies of lynching for the New York Review of Books. So there was plenty of fresh information about that time period, information that it is hard to believe everyone so easily forgot when reading "The Plot Against America."

The most important movement in American fiction, regardless of style, is about moving beyond ethnic provincialism in order to summon a more real and more complex world. In "The Human Stain," Philip Roth hit one out of the park. In this new one, he took to an old American tradition, the segregated baseball team, and became Casey at the Bat.