The short life of a famous drug

What happens to a drug without toxic side effects that halts cancerous growth? Answer: Wall Street doesn't see any money in it, and it disappears. 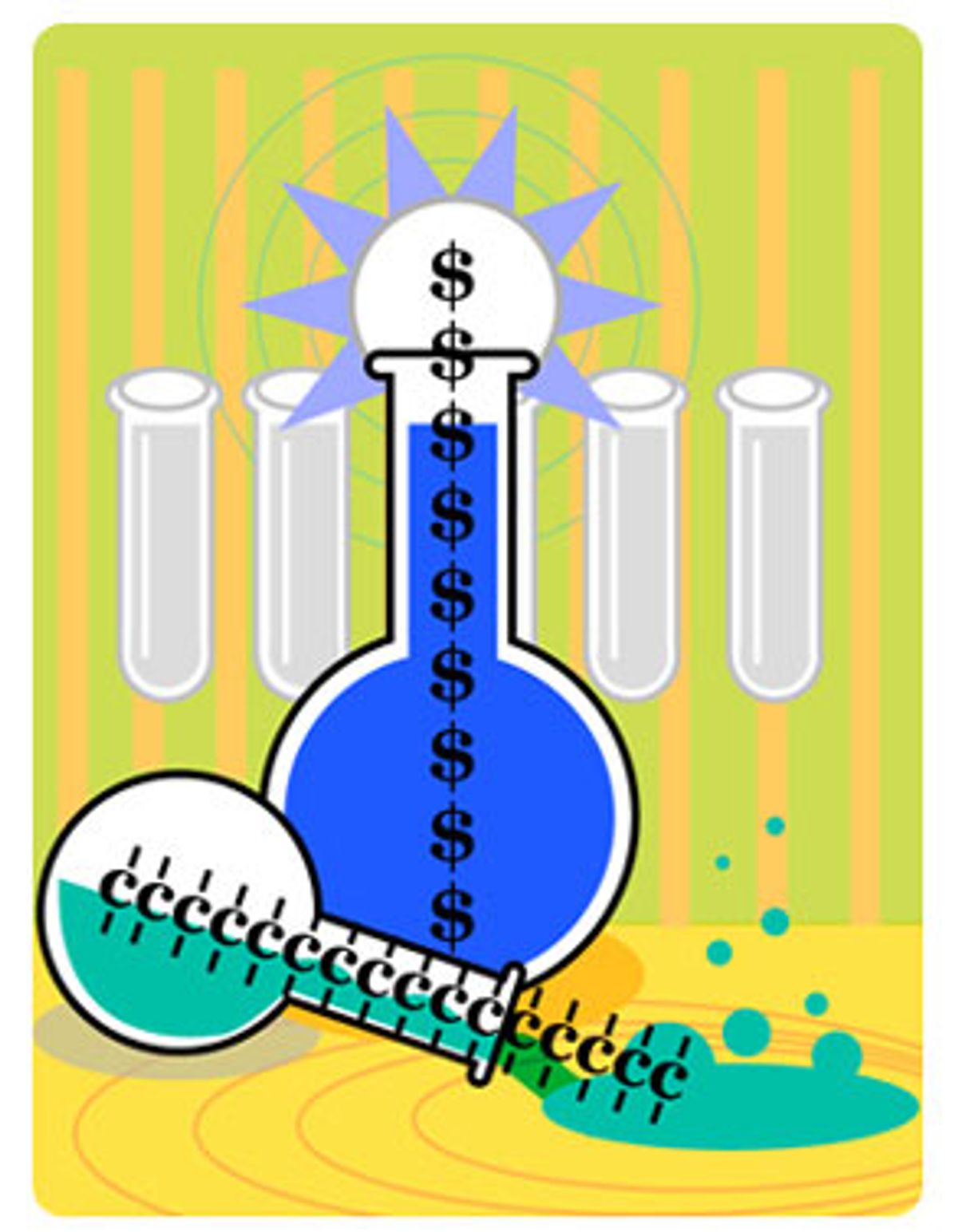 On the winter day when the doctor told Scott Toner he might die sooner rather than later, Toner convened a meeting. His three brothers, his mother, friends and in-laws gathered in the home of Toner's youth. A malignant tumor had metastasized and spread to his pancreas and liver. It was a death sentence, which is why the doctor had summoned him to his office with this advice: "Bring someone with you."

That evening Toner broke the news to his inner circle, quietly and one-by-one as he answered the door at the family house in Cambridge, Mass. There were tears, hugs and a bruised fist from his youngest brother punching a wall. As the night burned, emotions were soothed only by the soft glow of family videos and reminiscing. "It was like my wake," Toner recalls today.

Toner, 35 now, a newlywed and full of life, should not be alive to tell this story. It is one of hope for the 10 million people worldwide who will be diagnosed with cancer this year -- and it's a revealing look at how everyday business decisions determine the course of cancer science.

The experimental drug credited with sparing Toner's life is not being developed today in clinical trials. For reasons that have as much to do with economics as science, there's a limited supply left of the protein-based medicine Endostatin. Toner's daily injections could dry up late next year.

Six years after being teased as a possible cure for cancer on CBS' "60 Minutes" and on CNN and in top magazines and newspapers, Endostatin sits -- at least temporarily -- on medicine's junk heap. Its stalled progress can be traced to many things: a Maryland biotech company tapped for cash; obsolete Food and Drug Administration guidelines; and drug industry executives cowed by the escalating costs of drug research and development.

In 1979 it cost $54 million to take a new drug from discovery to market. By 1991 that figure was up to $231 million, and by 2001 it had skyrocketed to $802 million, according to Boston's nonprofit Tufts Center for the Study of Drug Development. In the 1980s, a new drug could move from the lab bench to the pharmacy shelf in about seven years. On average today it takes from 12 to 15 years.

Before EntreMed Inc. relinquished its rights to Endostatin this year, the small biotech company was spending tens of millions of dollars annually to develop Endostatin and its cousin Angiostatin. The effort nearly bankrupted EntreMed. Maybe it would have benefited from an early peek at a 2004 report from San Francisco life-sciences merchant bank Burrill & Co.'s. In the report, the bank warns about the escalating costs to develop drugs and advises companies to make painful decisions sooner -- to cut losses.

But it is this cost and caution that is sucking the dare out of drug discovery, says Dr. Judah Folkman of Children's Hospital Boston, whose research lab first discovered Endostatin and its potential to relax cancer's grip. "The definition of discovery is that no one else can see it," Folkman says. "Somebody has to see it first."

And in a marketplace where the mandate is to satisfy investors now and worry about everything else later, chasing expensive, elusive cures can be seen as risky business.

"We're reluctant to use the word 'cure' today. We're gun-shy," says Dr. William J. Slichenmyer, vice president of oncology drug development for Pfizer Inc., which has 20 cancer-fighting drugs in development. "Cure is a slippery term ... The only thing I can say is we're doing our best to find anti-cancer medicines."

Industry prudence currently funnels most cancer research toward the problem of localized tumors, where results are more easily proved to the FDA. The metastasized tumor -- a moving target -- claims 90 percent of cancer deaths, yet less than 10 percent of the National Cancer Institute's $800 million budget for basic science is spent on grants studying metastases.

"You can't tackle all the problems at once," says Dinah Singer, National Cancer Institute director of cancer biology. "You start at the fundamentals and build up a base of understanding."

Endostatin is intriguing because it works on both localized and metastasized tumors. It appears to work best on neuroendocrine tumors, like Toner's. The tumor's name refers to a type of cancer cell that can divide and attack anywhere in the body -- the lungs, liver, pancreas. In a test of 42 advanced-stage patients, it stopped the cancer's growth in 26 and shrunk it in two, according to an EntreMed trial overview dated February 2004. It failed, however, in tests on melanomas and sarcomas, Folkman says.

Stopping growth in more than half of the patients isn't good enough for Wall Street, in part because the current metrics by which drug success is judged don't value such a result.

If chemotherapy doesn't reduce a tumor by at least half, which qualifies it for an FDA score of "complete response" or "partial response," it is considered a failure, Folkman says. The tumor will typically adapt and charge back, and most chemotherapy drugs are so toxic that the drugs cannot be physically tolerated indefinitely.

"One has to demonstrate tangible endpoint success by extending life or quality of life," says Dr. Richard Pazdur, the FDA's director of oncology drugs. "In cancer the drug toxicity is such that you want to see something more than 'stable disease.'"

But the irony is, Endostatin is not toxic; it's benign. So it's being judged by the wrong criteria: It does no harm, and it appears to inhibit the growth of some tumors.

When famed Nobel laureate Dr. James Watson proclaimed Endostatin the Holy Grail of cancer research in 1998, the drug was curing cancer only in mice. He couldn't have imagined its subsequent pitfalls. The test results were a public relations dream turned disaster. EntreMed's stock briefly shot from $12 a share to $85 with Watson's praise, but the company posted losses of $20.5 million last year before selling its development rights to Endostatin. Its stock trades for about $1.80 today.

Houston-based Alchemgen Therapeutics Inc. has the Asian rights to market Endostatin, and the Children's Medical Center Corp., in Boston, owns the rights to market it elsewhere. Neither company will discuss its plans to develop it.

Because Endostatin didn't immediately live up to the hype, Folkman says Wall Street has been arbitrarily scared off.

"People keep saying, 'I hear, I hear, I hear it doesn't work,'" says Folkman, 72, a Harvard Medical School professor with no financial ties to Endostatin. "It's all perception."

As a surgeon-scientist in the 1960s, Folkman was the first to say tumors need to recruit blood vessels in order to survive, a belief the cancer-fighting community initially rejected, but now embraces. "I can tell you from my many years of experience," he says, sounding frustrated, "the perceptions of Wall Street have life or death consequences."

But there could be another reason for Endostatin's apparent demise. Endostatin is not the only angiogenesis inhibitor, meaning drugs that attempt to block tumors from developing blood vessels. The drugs are an attack on cancer's supply line. Starve the tumor and it stops growing and turns benign, or so the anti-angiogenesis theory goes.

A newer drug on the block, Avastin, is the first angiogenesis inhibitor approved by the FDA for treating cancer. Used in combination with other drugs, including traditional chemotherapy, it adds a median of five months to the lives of metastatic colorectal cancer patients. So it's possible that one reason for Endostatin's lack of favor is Darwinian -- it was supplanted by a newer, better drug.

"It's not that Endostatin is bad, but are there other compounds and molecules that are better?" says Dr. James Doroshow, the NCI's director of cancer treatment and diagnosis, and a former student of Folkman's at Harvard. "It is our job to bring forward the very best molecules out there. Is Endostatin one of those?"

Toner believes so. He injects himself twice daily with the protein drug. There are also several other patients that Folkman shows off with before-and-after photos, X-rays and PowerPoint slides that chart the shrinking size of their tumors. It takes 44 grams and about $60,000 a year to treat Toner, though Folkman says the expense to manufacture Endostatin could be reduced by newer synthesizing techniques.

He's not, exactly. Bimonthly CAT scans reveal four tumors stretching from the pancreas to the liver. They are, in the vernacular of FDA clinical trials, "stable disease." Simply, they stopped growing.

That's good enough for Toner. Toner lasted nine months on chemotherapy before his body couldn't take it any longer. The tumors started growing again three months into the regimen. Too sick to work, he traveled to Amsterdam, Brussels, Belgium and Bermuda and ran up thousands of dollars on his Visa card, figuring what the heck.

After hearing Folkman speak at a cancer symposium in Boston, Toner enrolled in an Endostatin trial. Within weeks his health returned, he went back to work full time, started dating again, and in September he was married. So far there has been only one side effect.

"You actually have to pay off that credit card bill you ran up when you thought you were going to die," he says, smiling.

If his supply of Endostatin dries up late next year, he'll shop around for another drug that works as well for him as Endostatin. He doesn't sound too concerned.

"I will try whatever I can to prolong my life," he says. "But hopefully somebody on Wall Street jumps in."

Greg Barrett is a national correspondent for Gannett News Service based in the GNS/USA Today bureau in Washington, D.C.