Nader (NAY-dur) n. Low point, as of a celestial body that has declined from an exalted height. 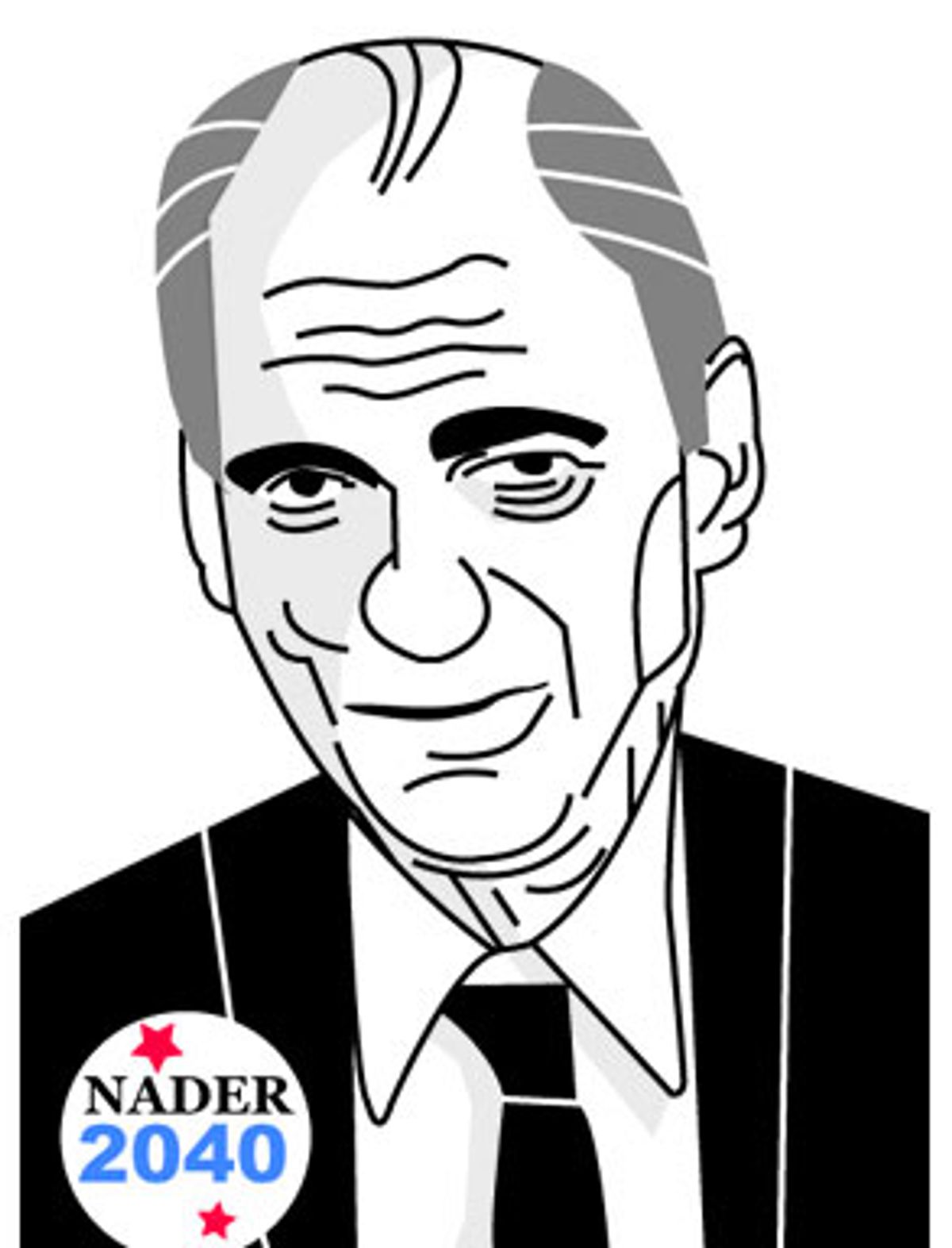 From Late English "nader," derived from the surname of Ralph Nader, a presidential candidate of the 20th and 21st centuries.

Nader first rose to fame in the mid-20th century as an activist and consumer advocate. His impact was vast and, in some respects, long-lasting; it has been estimated that, were it not for his insistence that all automobiles be equipped with seat belts, eight out of 10 Americans would die in highway accidents, rather than the five in 10 who presently do so. (For "highway," a road raised above the water, see Word History 7/45.)

In 1996, Nader ran for president; though unsuccessful, he continued to do so for the next 40 years. After decades of jumping from party to party -- Green, Reform, Libertarian, Grange, BJP (Hindu Nationalist), Free Silver, Forza Italia, Whig, Jacobin and Likud -- Nader finally started his own: the Bull Mouse Party, a wholly owned subsidiary of GOP Studios, itself a division of DIEHARD (Diebold Halliburton Rangers Disney).

In 2036, Nader -- then a spry 102, kept fit by a vegan diet and by (in his words) "running every four years" -- embarked upon what would prove to be his final campaign. His "platform" (the goals a party promulgates in order to make it seem superior to others: see "platform shoes," Word History 3/43) included rolling back the poverty tax (officially known as the Economy Drag Disincentive Program, this was an income-tax surcharge of 20 percent levied against families that failed to spend more than $30,000 a year), protecting the remaining national park (the Mall in Washington, D.C.) from oil exploration, and limiting major foreign wars to months with an "R."

By this time there were fewer people eager to vie for the White House, since the lower floors, like much of the continental United States, were now below sea level. The Democrats nonetheless did manage to field a candidate, Hadassah Lieberman, who, because of changes in campaign-finance laws as well as hydrology, was forced to barnstorm the country in a 32-foot houseboat that also served as headquarters of the Democratic National Committee. ("Houseboats" were houses that, when surrounded by rising waters, were found to be seaworthy, perhaps because of the airtight "WMD shelters" in their basements: see Word History 9/44.)

When the Democrats lost yet again, by 49 to 47 percent in the popular vote, with Nader winning 6 percent (the demand for a recount was rejected by the Supreme Court), there were widespread calls to save on future election costs by adopting a constitutional monarchy. This, however, was roundly rejected by Republicans on the grounds that it would involve returning to the restrictive age of constitutional rule that had preceded the tenure of John Ashcroft, an attorney and five-star general, as the nation's top law-enforcement officer.

Republicans further argued that the United States was still, by any reasonable definition, a democracy, since Barbara Bush II, while genetically of the same family as six of the seven presidents who preceded her, had been a member of Sage and Chalice rather than Skull and Bones while a student at Yale. (Yale Inc. was a leading higher-education and home-security company with the slogan "We Have a Lock on the White House.")

In January 2037, Nader told interviewers he was in despair over the state of his beloved country, which was now mired in debt, excluded from the U.N. as a rogue state, and subject to almost daily attack by terrorists from Syria, Iran, Malaysia, Gabon, Sweden, San Marino and other nations it had "preemptively" invaded (see Word History, 1/43). He had, moreover, seen the reforms in highway safety, healthcare, product safety, the environment, aviation safety, elder care, food safety, corporate responsibility and politics that he had achieved in the first six decades of his life almost entirely reversed in the last four, thanks to the "mulish obstinacy" of the Democratic Party in refusing to adopt an entirely Naderite platform.

Leaving a note in which he castigated that party for failing to detach itself from its "Siamese twin," Nader took his own life by going for a drive on the BosWash Sprawlway in a 1965 Volkswagen Beetle, a small automobile powered by insects of the order Coleoptera. ("Twins" refers to human litters of only two infants; at the time, these were still common in developing countries such as Siam, where high dosages of fertility drugs were not yet in wide use, as well as in impoverished industrial states such as Minnesota.) Within minutes, his car was crushed between two Ford Bradley AUVs (Armored Utility Vehicles) driven by suburban "soccer moms" (see Word History, 8/43). According to the coroner's report, his seat belt was not fastened.

Though the derivation of "nader" given here is widely accepted, some scholars point to attested uses of the word predating the birth of Ralph Nader and involving a slightly different spelling. The likelihood, though, is that these were digitally inserted into the historical record by operatives of the Bull Mouse Party who hoped to protect their leader's legacy.

Ironically, "nader" is one of the last English words in use worldwide -- the world's former lingua franca having, evidently, reached its nader. (Translated from the Icelandic by Ali Halvarsson.)