Richard Gere waltzes his way through a midlife crisis and past Jennifer Lopez and Susan Sarandon. 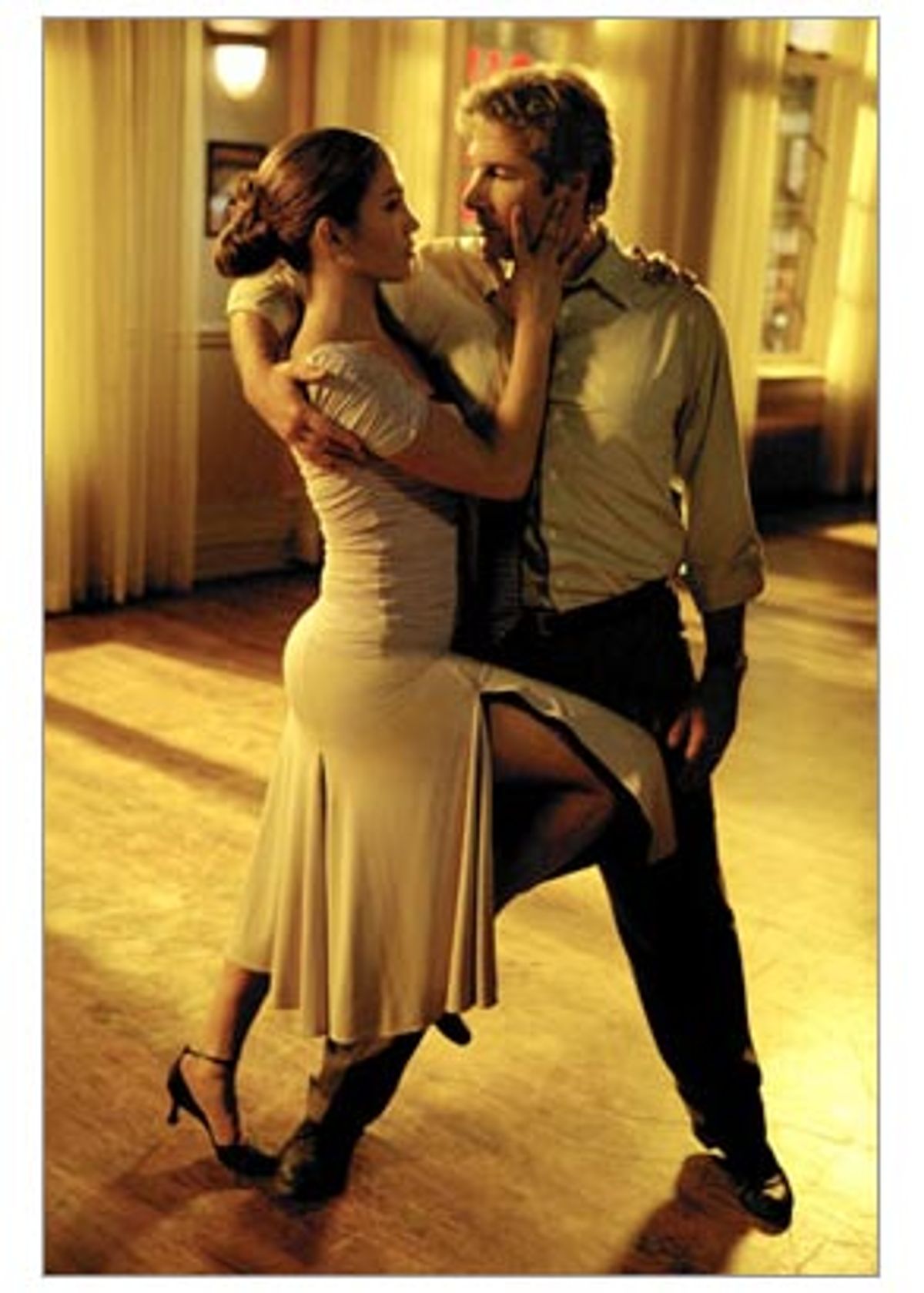 There are so many appealing performers in "Shall We Dance?" that it's a crime the director, Peter Chelsom, and the screenwriter, Audrey Wells, haven't given them more to do.

In this remake of the 1997 Japanese film of the same name, Wells substitutes shtick for character -- an aging dance instructor secretly nips from a flask, a brash blond student wears tight outfits and instructs all the men to stop looking at her ass, and so on. So the flashes of charm we get from performers like Bobby Cannavale, Omar Miller, Richard Jenkins and the R&B singer Mya (whose lips and eyebrows curl like a cartoon kitty-cat's) have to suffice. There's just enough of Stanley Tucci as a lawyer who, with false teeth, flowing toupee and sequined clothes, moonlights as lord of the Latin dance, and too much of Lisa Ann Walter as that blond dance student -- she's abrasive where she intends to be brassy.

Chelsom's approach to plot development is just as slapdash. The movie feels choppy and rhythmless. And he's rather hopeless at dance sequences. Though, frankly, what's so hard? How tough can it be to point a camera at two people gliding around a room, making sure that the shot isn't framed so closely that parts of their bodies are cut off? Chelsom cuts from long shots to medium shots, destroying the rhythm of the dancing, as if we were all suffering from ADD and couldn't watch a three- or four-minute dance sequence (and as if the crowd used to MTV editing would show up at a movie about ballroom dancing, for God's sake).

As a result, we get next to none of the stylized beauty, none of the sublimated longing of ballroom dancing. There's one exception. When Jennifer Lopez, ably partnered by a dancer whose name I cannot discern from the production notes, glides around a wood and brick dance studio to the strains of "Moon River" ... well, if you're immune to the charms of that, you're probably not someone I'd want to have a drink with. But, like most of the movie's other pleasures, it's fleeting. To see how a movie like this should be done, take a look at the modest and pleasurable 1998 musical drama "Dance With Me," starring the stunning Vanessa Williams and the delightful Latin American singer Chayanne.

What keeps "Shall We Dance?" together is Richard Gere, the arc of whose screen career is a testament to the authenticity that can come with age and experience. Gere has gone from being a pretender to the lineage of the movies' Method heroes (Brando, De Niro, Pacino) to an utterly relaxed leading man; with him the audience can luxuriate in the pleasure of watching someone completely comfortable with himself and yet not cocky.

He's playing a Chicago lawyer here, happily married (to Susan Sarandon in a role that mostly requires her to look bewildered) but nagged by the notion that he's missing out on something. He thinks he knows what it is one night when, riding home on the El, he looks up and sees a solitary beauty in the red-neon-bathed window of a dance studio (this is the best image in the movie -- it suggests a cross between Edward Hopper and Reginald Marsh). The young woman is Jennifer Lopez, an instructor at an old-style dance studio. Gere signs up for ballroom lessons and quickly figures out that what he wants isn't Lopez but the lightness of spirit he gets from dancing.

The choice makes sense -- Gere's unhappiness isn't with his marriage (and besides, you'd have to be pretty damn ungrateful to cheat on Susan Sarandon). But the movie's major failure is that, beyond a few perfunctory scenes, it doesn't build a relationship between Gere and Lopez. You want to see them connect as friends in a more sustained manner than the movie allows -- and you sure as hell want to see them dance together a lot more than they do.

Lopez's role doesn't seem to take anything of Lopez the performer into account. We're told that her character has kept to herself after breaking up with the lover who was also her competitive-dancing partner. The role has been conceived to make Lopez's character seem remote, almost icy, instead of heartbroken and self-protective. That doesn't make sense for a star whose screen presence is as warm as Lopez's. I often go to a Jennifer Lopez movie sick of reading about her in the gossip columns and am reminded -- again -- of how enjoyable she is to watch.

Unfortunately, Lopez is a star at a time when gossip is touted as if it were journalism, and it often seems she's being reviewed for her romantic life rather than for her performances. You wouldn't know that she was actually good in "Gigli," since the movie was used by critics as an excuse to make jokes about her and Ben Affleck, or as an inadvertent demonstration that bad buzz can sucker critics just as much as hype. ("Gigli" was bad -- but anyone who thinks it's the worst movie they've ever seen hasn't seen enough to be making those judgments.) Lopez -- finally -- gets to smile in her last scenes with Gere. Why Chelsom wants to deny his movie of that ray of sunshine beforehand is a mystery -- it doesn't do the picture or his star any favors.