The new film by "South Park" creators Matt Stone and Trey Parker starts off strong, but then resorts to lame anti-left jokes that could have been written by Ann Coulter. 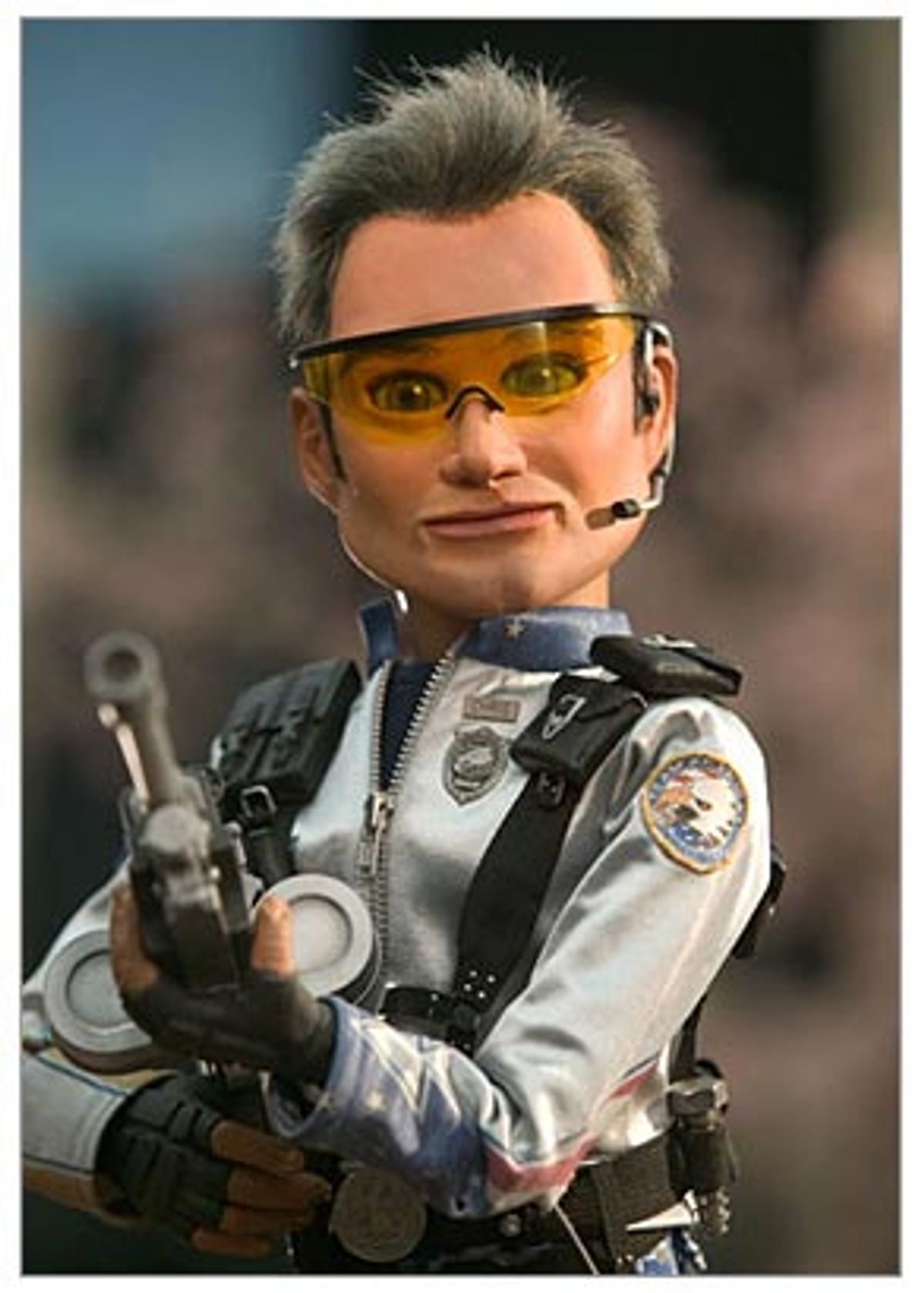 Good satire is nobody's friend -- it shows no mercy and has no agenda. But that's not the same thing as not having a point of view. Ultimately, "Team America: World Police," the new puppet satire from "South Park" creators Trey Parker and Matt Stone, is so determined not to have a point of view that it cancels itself out in the manner of those CNN "debates" where two talking heads from opposing sides gainsay each other for five minutes.

"Team America" takes on America's war on terrorism -- and like good satirists, Parker and Stone have correctly identified the cant on each side. But instead of picking their way through this poop-laden cowfield, they've chosen instead to refuse all claims. And that stands contrary to the incisiveness and intelligence they display week after week on "South Park," which manages to skewer all sorts of hypocrisy without ever giving in to cheap cynicism. "Team America," for all its outrageousness, is the first work from Parker and Stone that I'd describe as a failure of nerve.

The title "Team America: World Police" neatly sums up the way much of the world looks at us right now, as a rah-rah concern that has taken it upon itself to act as neighborhood cop on a global scale. And the opening sections of the movie are everything you hoped they'd be. Stone and Parker and their co-writer Pam Brady have had the brilliant satirical stroke to treat Bush-era foreign policy as if it were an '80s action movie. It's the unholy marriage of Donald Rumsfeld and Jerry Bruckheimer, complete with power ballads.

Team America, a paramilitary group of government-sanctioned operatives working from their headquarters deep inside Mt. Rushmore, jet all over the world fighting the enemies of freedom -- especially those with turbans and hook noses. In the first scenes, men of that description carrying steel briefcases with blinking lights are all set to carry out their nefarious deeds in the heart of Paris. Enter Team America who defeat them handily -- at the cost of destroying the Eiffel Tower, the Arc de Triomphe and the Louvre. It's a reductio ad absurdum demonstration of the "it became necessary to destroy the village in order to save it" mentality, the thing that's playing itself out right now in Iraq.

Part of what's so funny about the first part of "Team America" is that Parker and Stone have managed to satirize movies that, because they were so vulgar and bullying and ludicrous, seemed to be impossible to satirize. They've got the clichés of '80s action movies cold: There's the tragedy haunting one T.A. member; the talented but unsteady rookie who has his own trauma to overcome, which he will inevitably face at a crucial moment; there's the unexplained resentment a team member feels for the new guy; the tangled romantic alliances, and so on.

The mimicry of the technical aspects of those pictures is note-perfect. The cinematography by Bill Pope (who shot the "Matrix" movies) fetishizes the armature and mayhem on display. When Team America planes zoom out of their mountain HQ, a bad '80s-style number "America, Fuck Yeah!" blasts on the soundtrack. (There's even a slow version, the "Bummer Remix" for a more, uh, introspective moment.) And there's a priceless montage shot on location in Washington where Gary, the rookie, accepts his awesome Team America responsibilities by gazing on the Lincoln Memorial and the Capitol building. All the while, a country ballad that goes "What would yew dew for frayh-dom?" plays on the soundtrack. (As "South Park: Bigger, Longer and Uncut" demonstrated, Trey Parker is a whiz at musical parody.)

The movie also has a great Bond-movie evil mastermind, Kim Jong Il (or as Jesse Helms once referred to him in the Senate, "Kim Jong Two"). With his chubby cheeks and beady eyes magnified by huge glasses, his elongated forehead and black pompadour, the North Korean dictator looks like the love child of Mao and Conway Twitty. Parker and Stone have used the hoary old trick of having him confuse his L's and his R's, and if you're above laughing at that, you're a better person than I am. (The highlight of Kim's locutions comes in his ballad about the sadness of being an absolute dictator, "I'm So Ronery.")

In interviews, Parker and Stone have talked about what they called the hell of working with marionettes. Cleverly, they've incorporated some of that clumsiness into the movie, getting laughs out of the bouncing unnatural way their puppets walk. Unfortunately, those jokes don't entirely absolve the basic problem that we're watching physically clumsy movement. That they sustain it for as long as they do is remarkable -- and those creepy "Thunderbirds"-like puppets, their expressions reflecting the blankness the movie is satirizing, works for the film -- but the awkwardness starts taking a toll on the laughs and the timing.

The main problem though is that while Parker and Stone have come up with a satirical idea with which to satirize the gung-ho right, they haven't come up with anything comparably sharp about left-wing Hollywood. It's not as if the left hasn't given satirists anything to seize on. And stars who make public statements as self-righteous as Sean Penn and Tim Robbins have are ripe for satire. They're just begging to be taken down a peg. When a Sean Penn marionette talks about seeing children playing peacefully in chocolate rivers on his trip to Iraq, the movie scores a bull's eye. But most of the anti-left jokes here could have been written by Ann Coulter.

In the movie's scheme, Alec Baldwin heads a coalition of stars who believe themselves smart enough to do a better job running the world. They succeed in finding a sponsor for an international peace conference, Kim Jong Il. Kim plans to gather the world's elite in North Korea and then unleash his weapon's of mass destruction to bring global chaos.

The idea here, that stars who speak out against war are actually aiding the terrorists, is the same one touted by countless right-wing columnists. It's the same argument made by people who ascribe to the "let's kick some ass" patriotism that Stone and Parker are satirizing in the movie's opening sections. As a satirical springboard, it doesn't go far enough. By the time the stars are taking up arms to stop Team America from attacking Kim Jong Il, the picture seems to have lost its satirical grasp.

A letter to the New York Times this week is (unintentionally) a better piece of satire than anything in the last half of "Team America." A woman who watched the second presidential debate with her 8-year-old son so the boy could see an example of wisdom and maturity in John Kerry was "disturbed ... by Mr. Kerry's harsh language about hunting down and killing the terrorists. I would have preferred less barbaric phrasing." She goes on, "I'd rather that [my son] see himself as a citizen of a country that brings enemies to justice, rather than a country where the word 'kill' is necessary to win votes." Isn't what's most appalling about the reaction to terrorism from some sections of the left this idea that terrorists will listen to reason? Wouldn't it have been funnier, and more accurate, not to show the stars killing for peace but being so dedicated to peace they'd be willing to tolerate any atrocity?

For all the epithets that have flown back and forth on "South Park," I've always felt that Parker and Stone could make the distinction between satirizing prejudice and milking it for laughs. But the constant gay jokes in "Team America" left me queasy. The Hollywood stars in the movie represent a group called the Film Actors' Guild, and they're shown with identifying legends like "Alec Baldwin F.A.G." Or we hear them saying that not resorting to violence is "the F.A.G. way." A fellow critic made the argument to me that Stone and Parker are satirizing the macho mindset of action movies. I don't think so. The jokes aren't being put in the mouths of a character in the film (the way anti- Semitism is satirized in "South Park" by putting it in the mouth of Cartman); they're being made by the filmmakers.

Early on there's a brilliant parody of "Rent" (called "Lease") where we see the multicultural cast perform the finale "Everyone Has AIDS," and it's not in the least homophobic. With lyrics like "Come on everybody/We got quilting to do," the number scores points off Broadway self-aggrandizement and the pathetic quality of politics reduced to showy symbols.

When Billie Joe Armstrong of Green Day sings "Maybe I am the faggot America" in the band's new song "American Idiot," he's talking about how the right characterizes people who don't go along with their agenda. I think that same sort of characterization is being practiced in "Team America." At the risk of sounding like one of those killjoys who Parker and Stone satirize, gayness here is constantly associated with weakness and subservience.

In the interview Parker and Stone claimed that, despite what some people think of them, they do care about things. And I don't think anyone who'd ever watched "South Park" would doubt that. In some ways, I think that show is basically decent and goodhearted. But they've deadened that part of themselves in "Team America." This is just about the first time I think Parker and Stone have come off as acting above it all.