Revolt in the ranks in Iraq

The inside story of the Army platoon that refused to carry out a "death sentence" mission. 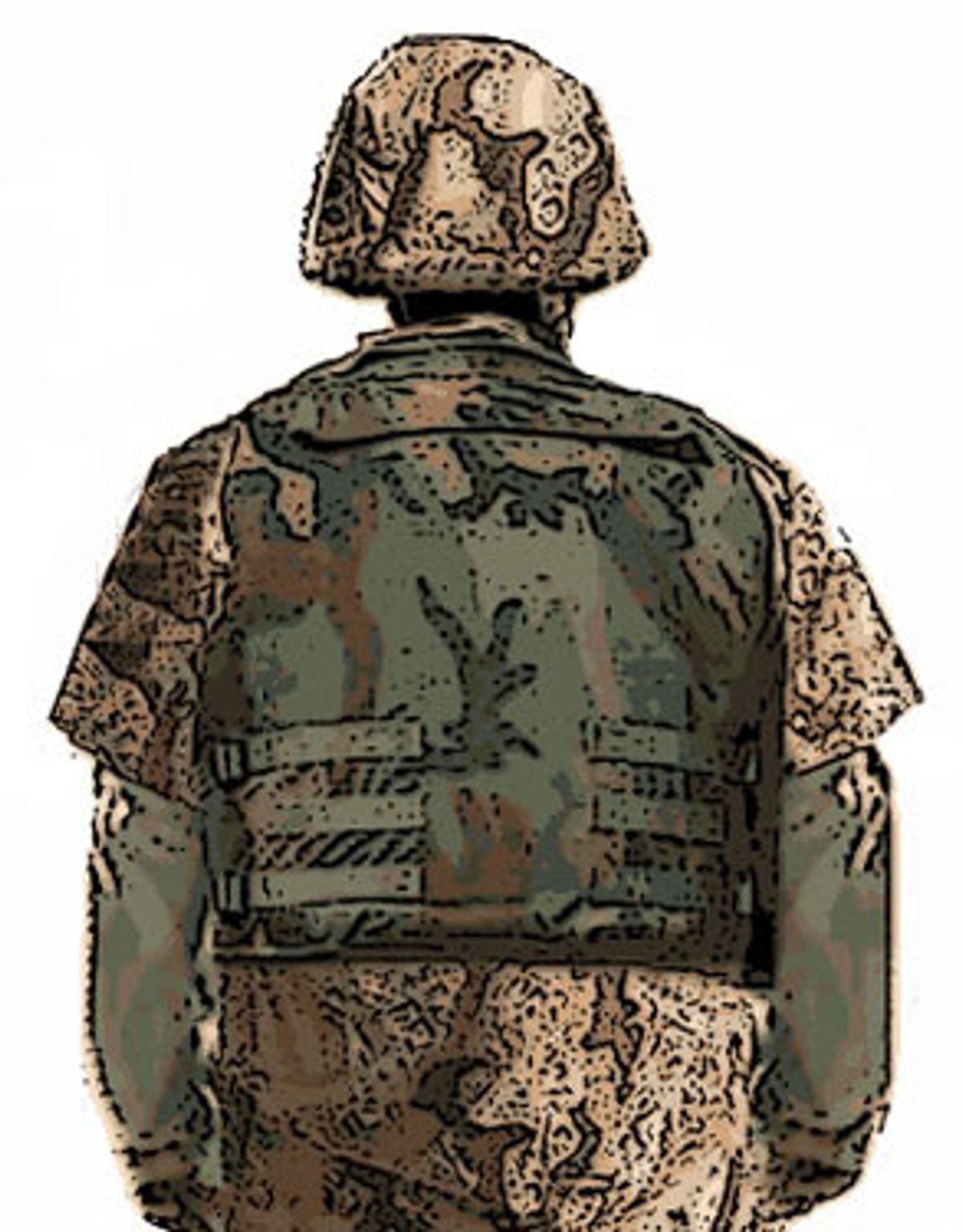 The e-mail arrived Tuesday evening. But Kathy Harris didn't see the urgent plea from her son, Spc. Aaron Gordon, 20, until she arrived at work Wednesday morning. By then, Gordon and 16 other members of his Army Reserve platoon were corralled in a tent in Tallil, Iraq, under armed guard, for refusing to drive a fuel supply convoy in what another of the detained soldiers would later describe as a "death sentence."

"At that point [when her son e-mailed] they hadn't been arrested yet. He was asking my advice about what could happen if they refused an order," Harris told me on Friday by telephone from Mississippi. "He said they had been ordered to take a contaminated load of fuel into a high-danger area. He said that they had already taken this load to one location, and it had been refused, and that they had, in his exact words, a '75 percent chance of being hit' on this new mission. He asked what the potential reprimands were if he disobeyed his commanding officer and, if it came to that point, what would happen to him if he had to get physical."

Harris quickly phoned a friend who is a judge advocate general (JAG) officer and e-mailed her son back. "I told him if he struck an officer he faced potential three years imprisonment and a dishonorable discharge. I said, 'Do not do that.' I told him to talk to his first sergeant and see if he could help. But I doubt he ever got my reply."

Indeed, by the time Kathy Harris replied to her son's e-mail, several other military families had received desperate phone calls from their loved ones in Iraq. There had been some sort of mutiny, it was clear. The details were sketchy, but it appeared that the platoon had refused to deliver a load of fuel to Taji, Iraq, because the soldiers believed their lives were at serious and unnecessary risk. According to the family members' accounts, they were detained at gunpoint by soldiers for more than a day.

But the military denies that the reservists were detained at all. Lt. Col. Dave Rodgers, a spokesman for the 81st Regional Support Readiness Command of the U.S. Army Reserves in Birmingham, Ala., said in an interview Friday that while an investigation into the matter is ongoing, "No soldier has been arrested, charged, confined or detained as a result of this incident."

That would be news to many family members, who say their loved ones told them that they'd been confined in a tent at gunpoint and refused permission to use the bathroom without armed escort.

Spc. Amber McClenny, 21, managed to sneak away Wednesday as the detained soldiers were being taken to the mess hall. She phoned her mother in Dothan, Ala. Her daughter's steady but urgent voice on the answering machine jolted Teresa Hill from sleep. Hill saved the message and played it for me Friday afternoon over the telephone.

"Hey, Mom. This is Amber. Real, real big emergency," McClenny said in the recorded message. "I need you to contact someone. I mean, raise pure hell. We had broken down trucks. No armored vehicles. Get somebody on this. I need you now, Mom. I need you so bad. Just please, please help me. It's urgent. They are holding us against our will. We are now prisoners."

According to family members, the convoy was being asked to go much farther than usual from its southern base -- on a more than 200-mile trip through and around the extremely hostile Baghdad area. The tankers lacked bullet-resistant armor and, lumbering along at 40 miles an hour, would have made an easy target for insurgents lobbing bombs or grenades. The supply trucks are in disrepair and prone to breakdown. Many of the soldiers hadn't had enough sleep. And  astonishingly -- no armed escort or air protection was to be provided, the family members said.

Most absurdly, though, the jet fuel that these members of the 343rd Quartermaster Company were risking life and limb to transport wasn't even usable. It was contaminated with diesel and had already sensibly been rejected by one base and would undoubtedly be rejected again in Taji -- if the convoy managed to make it to its destination at all.

At 5:12 a.m. Wednesday, Patricia McCook, also of Jackson, Miss., was awakened by a "very frantic" phone call from her husband, Sgt. Larry McCook. "He was saying, 'Wake up! Please listen to me! I sneaked out of the back [mess] hall to tell you something. Something's going on. The military wants to sweep it under the rug, but it needs to be out. Get a paper and pen and write this down."

The mother of two teenagers jerked out of bed and began scribbling. Her notes read "disobeying a lawful order," "17 of us," "all of us agreed not to go." Her husband, she said, "was just trying to get out as much information as possible. I had to slow him down to get the names of some of the other people." She managed to get three names before he hung up on her.

Beverly Dobbs of Vandiver, Ala., also received an anguished phone call Wednesday from her son, Spc. Joseph Dobbs. "Momma, we're in a lot of trouble," he said, according to Dobbs. "We had some contaminated fuel. We went out on this mission, and they turned us back, and our captain got mad and was gonna send us out on another mission. We refused to go because our vehicles were in awful shape. The place they wanted to send us was dangerous. We had to go without guns. All of us refused to go. We're not risking our lives like that."

Before he hung up, Joseph Dobbs told his mother: "They had us in this tent, and they had guns pointed all around us, and the guns were loaded. We're not allowed to go nowhere." The M-16 rifles the guards carried were locked and loaded, another detained soldier told his family, and their bathroom trips were made under armed escort.

Joseph Dobbs is 19 years old. Beverly Dobbs told me: "You see why I'm freaking out? My baby is only 19!"

The 343rd Quartermaster Company is based in Rock Hill, S.C., and has been in Iraq since February. From their base in Tallil, about 190 miles southeast of Baghdad, the reservists have run fuel supply convoys from Najaf in the Shiite south to Fallujah in the Sunni triangle, but more recently they have stayed away from those cities in the heart of the burgeoning insurgency.

"When Amber first told me she was doing convoys, she said they would have two or three gun trucks with them, and she was either driving the tanker or driving a gun truck. And they always had air support. But this time, they were ordered to go without," her mother, Teresa Hill, said.

Hill heard nothing more from or about her daughter until Thursday morning. A specialist who was not part of the detained group had managed to squirrel out phone numbers of soldiers' family members back home who needed to be contacted, Hill said. The specialist phoned Hill, and Hill began alerting the other family members.

By Friday morning in the United States -- Friday afternoon in Iraq -- the families began receiving phone calls from their loved ones saying that they had been released. Spc. Desmond Jones, 33, called his wife, Angela, in Charlotte, N.C. "He said that they weren't directly arrested. He said they [the guards] did have guns. But we didn't really get to talk about it, because he said there were others standing in line behind him to use the phone," Angela Jones said. The Joneses have two children.

Pam Sullivan, also of Charlotte, said her husband, Spc. Peter Sullivan, 35, also called Friday morning. "He said they are out of jail. He said if they would have done it [delivered the fuel in creaky trucks without armed escort], it would have been like a death sentence," she said. She added that her husband had told her his request to see a lawyer had been denied. The Sullivans have three daughters. In civilian life, her husband works for an air conditioning company.

In an official statement, the Army said: "The 343rd is an experienced company that has performed honorable service for nearly nine months in Iraq. This was an isolated incident confined to a small group of individuals, and though there was a delay, no mission went un-accomplished as a result."

When I told Lt. Col Rodgers that there appears to be a wide gulf between the families' perceptions that their loved ones had been arrested and the Army's categorical denial that anyone had been detained, he said: "That is true." When pressed to explain, he said, "Well, I don't know where the families got that information from." When told they got it from their detained sons, daughters and husbands, Rodgers said: "I have been in touch with the coalition press information center in Baghdad. I was told the soldiers are not under arrest and they have not been detained."

Responding by e-mail from Iraq to an inquiry from Salon, Maj. Richard Spiegel, a spokesman for the 13th Corps Support Command, said: "The confusion might be because but they were required to remain in the unit area until they provided an initial statement -- this was required from anyone that was involved, witnessed or had knowledge of the situation and is a prudent practice to insure the investigating officer gathers all the facts in a timely manner. Soldiers' rights were insured at all times during this process."

Spiegel did not address in the e-mail a question about whether the convoy was to have been sent off without armed escort or air protection. He wrote that "it would be inappropriate to discuss specific force protection measures and convoy procedures." But, he added, "I can assure you that the 13th Corps Support Command does not permit convoys to move without adequate protections and the ability to respond robustly to any threat or attack."

Spiegel also said no soldiers had been denied requests for lawyers.

In its official statement, the Army said that "soldiers scheduled for the convoy mission raised some valid concerns and the command is addressing them." Yet, an investigation is under way into whether "any offenses to the Uniform Code of Military Justice were committed and if so whether disciplinary measures are warranted," the statement said.

But as of Friday afternoon, it appeared that no military authority had contacted any family member in the United States to offer official notification of the investigation. "If Amber hadn't of snuck out [to make the furtive call home], I wouldn't have known," Teresa Hill said. "They are threatening her with court martial. They were saying eight years in prison."

Amber had once wanted to make her career in the military, her mother said. But after Iraq, Hill doesn't know what her daughter will do. "She was already scared to death of everyone else over there [in Iraq]. And now, she's scared of her own people."