If your mood swings are tied to the daily fluctuations of Electoral-Vote.com -- and you know who you are -- then you need Salon's guide to opinion polling sanity. 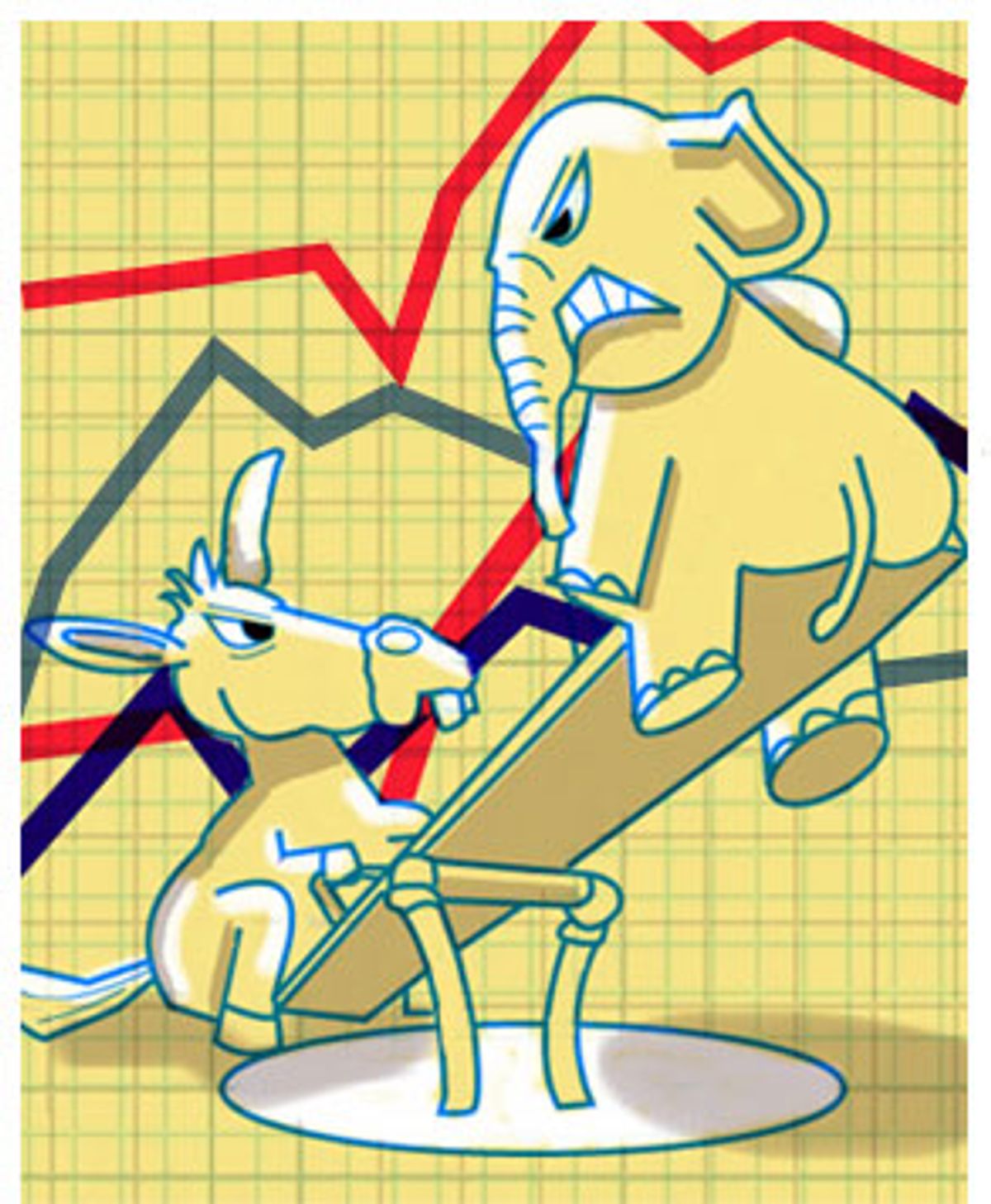 They are the numbers flying by on the TV screen, and if you're living and dying by the presidential race, no amount of Zoloft can even out the highs and the lows they bring. George W. Bush and John Kerry are tied in the brand-new NBC News/Wall Street Journal poll. Kerry is up by 3 in a Democracy Corps poll released Tuesday. He is down by 5 in the Washington Post poll from Tuesday night, tied in the New York Times poll from Tuesday morning, tied in last night's Zogby tracking poll, and down by an alarming 8 in the CNN/USA Today/Gallup poll released over the weekend.

Like a dieter checking the scale each morning, those of us who spend our days hitting the refresh button at PollingReport.com are going crazy over the minute-by-minute back-and-forth of it all. If you know what time the Washington Post puts up its tracking poll each day, you need to admit that you have a problem.

What you need -- what we need -- is a system. We're here to help. Here are four methodical ways to look at the polling -- four ways to clear your head, to keep track of where things are going, and to avoid shouting out wrong-track, right-track numbers when your kids leave their soccer shoes in the middle of the kitchen. The good news if you're a Kerry supporter or just a glutton for unbearable tension: Any way you look at it -- except maybe the way in which Gallup calculates its oddball likely-voter numbers -- the presidential race is extremely close.

Here are some ways to look at it.

Pick your pollsters based on past performance.

George W. Bush won the Electoral College in 2000, but Al Gore won the popular vote, 48.4 to 47.9. No pre-election poll reported those numbers exactly, but some came a lot closer than others to predicting Gore's half-point margin of victory. The best of the bunch: Zogby, CBS, Democracy Corps and Fox/Opinion Dynamics. The final polls from Zogby and CBS had Gore up by 1; Democracy Corp and Fox had the race tied. In other words, each of the four was off by about half a point.

What it gets you: Past performance may not guarantee future results, but let's just assume for a moment that the polls that came closest to getting it right in 2000 are the closest to getting it right today. Last night's Zogby poll had the 2004 race tied at 45-45. Tuesday morning, Democracy Corps had Kerry up by 3 points, 50-47, and the CBS/New York Times poll had the race tied, 46-46. Tuesday afternoon's Fox/Opinion Dynamics poll had Bush up 49-42 among likely voters. Average these top-performing polls from 2000, and you get Bush ahead by a point now.

Most polls report two sets of numbers: one for registered voters, the other for a smaller subset of respondents the pollsters deem to be "likely" voters. The registered-voter numbers are relatively consistent from poll to poll; the likely-voter numbers vary dramatically. Among registered voters, the CBS/New York Times poll has the race tied; ABC/Washington Post and Time have Bush up by 1; and Gallup and Newsweek have Bush up by 2. Differences among those five polls are well within their margins of error. But among likely voters, those same five polls have Bush leads ranging from 1 point (CBS/New York Times) to 8 points (Gallup). Add in Democracy Corps' 3-point lead for Kerry, and you get an 11-point spread in likely-voter numbers.

Ruy Teixeira, a senior fellow at the Century Foundation and the Center for American Progress, advises those who follow his blog : "Focus on the RV data, ignore the LV data." Each poll has its own methodology for identifying likely voters, and the calculations are seldom transparent. The screens and weighting that polls use can end up oversampling either Democrats or Republicans.

The latest Gallup poll projects that more Republicans than Democrats will vote in 2004, the opposite of what happened in 2000. And poll screening frequently excludes new registrants because while they may be highly motivated to vote in this election, they didn't vote in the last one. In the latest Democracy Corps poll, new registrants favor Kerry by a 24-point margin. Finally, in a recent article in Public Opinion Quarterly, New York University political science professor Robert Erikson and two colleagues argue that week-to-week shifts in Gallup's likely-voter results stem not from shifts in voters' views but from changes in the composition of Gallup's likely-voter pool.

Where it gets you: If you average the registered-voter numbers from the latest big polls -- CBS/New York Times, ABC/Washington Post, Time, Newsweek and Gallup -- you get Bush up by about 1.2 points.

There's one thing on which Democratic and Republican strategists agree, at least sometimes: the most important number to watch in a reelection race is the one belonging to the incumbent. The president's number in pre-election polling -- whether it's his percentage of support from respondents or his job-approval rating -- is a good predictor of the percentage of votes the president will receive on Election Day.

That's the point that Bush-Cheney pollster Matthew Dowd made back in March, when he said that "normally, presidents finish roughly the same as their job-approval numbers." And it's the point that Democratic pollster Stanley Greenberg made on a call with reporters Tuesday. "Everybody I know who runs a campaign focuses on that number as where he's likely to end up."

The theory is this: After four years with George W. Bush, people know him and know what they think about him. Barring some catastrophic external event, people who are lined up against Bush now aren't likely to move in his direction on Election Day, and undecided voters are likely to break heavily in favor of Kerry. So Kerry can pick up votes on Election Day -- so many that he can win even if polls accurately show him trailing by a few points the night before the election -- but Bush is stuck with whatever number he's got. Or so the theory goes.

So let's go to the numbers, starting with Bush's job-approval rating. The ABC/Washington Post poll has it at 54; Gallup has it at 51; Time has it at 49; Newsweek and Democracy Corps have it at 47; the CBS/New York Times poll has it at 44. Average them all, and you get 48.7. Now let's look at Bush's share of the vote in the polls. He gets 51 from the ABC/Washington Post poll, 45 from Zogby, 47 from the CBS/New York Times poll, 52 from Gallup, 47 from Democracy Corps, 50 from Newsweek, 48 from Time. That's an average of 48.6 percent. Use Gallup's 49 percent registered-voter number rather than its 52 percent likely-voter number, and the average drops to 48.

Forget the national polls; focus on the Electoral College.

USA Today's battleground state tracker also uses the latest polls, but it seems to refrain from painting a state red or blue until there's a consensus in the polls beyond their margins of error. Thus, while Kerry is up by 4 in the latest Wisconsin poll, USA Today lists it as a toss-up state.

The Washington Post's Electoral College map is a somewhat slower-moving and subjective affair, combining recent polling with analysis from the likes of David Broder. It's more cautious than the others, too: While it acknowledges that most observers have handed Oregon to Kerry, the Post is holding off because, it says, both sides still think the state is in play.

The CBS News electoral vote map is also on the cautious side. But unlike the Post, CBS offers no state-specific information about the polling or analysis that leads to its calls.

There are other ways to look at this thing -- futures trading, first-wife cookie contests, a geography-based test that compares the candidates' names and the names of cities and towns in America. But if you're grasping for those kinds of straws, maybe it would be better to take a break from the whole thing now. In just two weeks, Tim Russert will be on TV with his handheld white board, moving states from red to blue and back again. All will be known then. Or maybe not.

This story has been changed since it was originally published.