Getting out the vote by putting out

Groups like Votergasm.org and FTheVote are appealing to youthful lust to schwing the election. 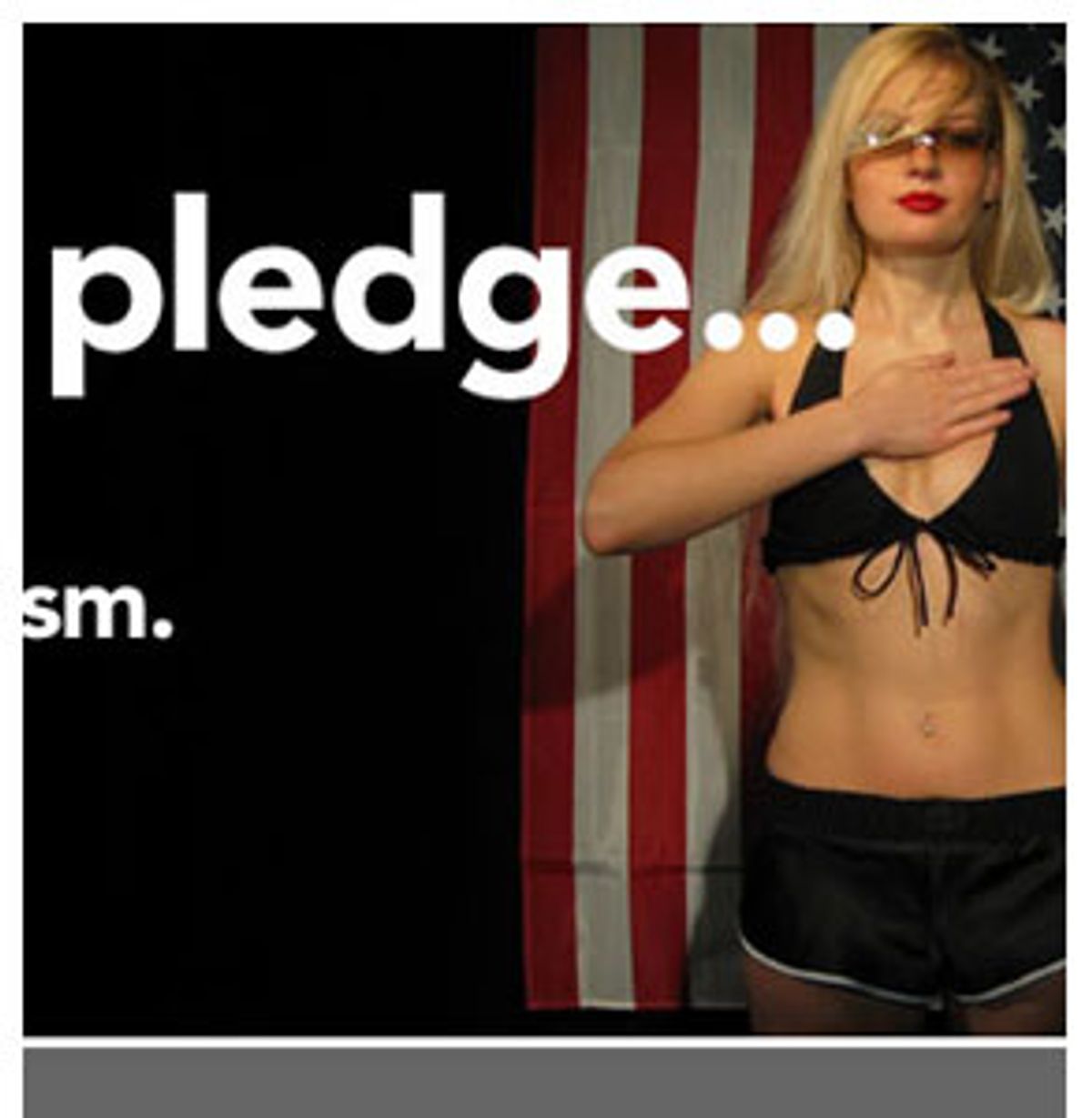 On Oct. 11, four co-founders of a Web-based youth activist group gathered in a small apartment in Manhattan for their weekly meeting. Chairs were pulled into a circle, and iPods and cellphones were dropped onto a wooden trunk-cum-coffee table. The attendants were well-groomed and collegiate looking. Wheat Thins and Oreos were going around. The host of the meeting, a 23-year-old publicity assistant named Julie Binder, sat barefoot on the floor, occasionally tapping out notes on a laptop.

The night's agenda was finding a venue and sponsors for the group's election-night party, and with just over two weeks until Nov. 2, the mood was serious. They considered bars called APT, Piano and Happy Ending. The space would have to be large but cozy, hip but relaxed, and it would need to have a television for watching the election results come in. Also, added Peter Koechley, a 23-year-old Columbia grad, it should be someplace "where it's easy to have sex where no one notices." The others nodded in agreement.

The party in question would be the climax (if you will) of Votergasm.org, a nonpartisan activist group whose Web site encourages "young people everywhere to have sex with voters on Election Night, and to withhold sex from non-voters until the next presidential election." Votergasm also features racy voting-themed photo spreads and a game in which players must guess a voter's party affiliation based solely on the person's head shot. The group's goal, according to the Votergasm home page, is to "send 100,000 first-time 18 to 25 year old voters to polls for the 2004 elections, and to catalyze 250,000 orgasms by the morning of November 3."

A joke, right? Not really, insists the group's 23-year-old publicist, Michelle Collins, a chatty, ponytailed Barnard grad who works as a legal assistant. Collins explained that the group was founded on the belief that young Americans are failing their country in two important respects: They are not voting and not having enough sex. "If there's anything that's really going to speak to America's youth, it's saying that voting is as important as sex, as fun, as American," says Collins. "Take part in both things; you know, be a patriot, be patriotic."

The premise may sound convoluted, but so far the Votergasm plan seems to be working. Since launching on Sept. 4, the site has received more than 516,000 unique visitors (nearly 20,000 unique visitors per day, recently). More than 25,000 people have pledged to vote and have sex on Election Day, and more than 1,000 have clicked on the site's voter registration link. Last month, Votergasm.org was targeted by Rush Limbaugh, who poked fun at the site, and called for his listeners to shut it down by overwhelming the home page with thousands of simultaneous hits. (Hordes of Rush fans succeeded in doing so, but the site was up again in a matter of hours.) "Me and Rush Limbaugh having a back and forth -- I never thought I'd say those words," laughs Collins.

Getting younger voters to the polls is particularly important in this year's neck-and-neck election. A recent Newsweek poll shows the youth vote to be largely up for grabs. MTV has been trying to appeal to this key demographic with its Choose or Lose 2004 campaign and the mission of P. Diddy's Citizen Change: Vote or Die organization is to make voting "hot, sexy and relevant" to Americans aged 18 to 30.

An even more hands-on effort is FTheVote.com, a Web site that encourages "sexy liberals" to seduce and have sex with conservatives in exchange for their partner's promise to vote against Bush. FTheVote.com (not to be confused with Fuck the Vote, which discourages voting in elections altogether and has nothing to do with sex) features photos of volunteer liberal "models" who offer their bodies to would-be Bush voters. "All you need to be armed with are your sexy progressive values, a razor-sharp wit, your genitalia, and a mindset that doesn't mind taking one for the team," the site advises. FTheVote also provides volunteers with a downloadable contract ("I, the undersigned, acknowledge that in exchange for physical affection ... from the cosignee, I will cast my vote for any candidate other than George W. Bush in the upcoming 2004 presidential election"). Since its July 4 launch, FTheVote has received more than 1.8 million unique visitors, and a West Coast branch of the group has formed.

Perhaps the most startling fact about FTheVote is that many people seem to be taking the site's challenge seriously. Martin has received about 100 signed FTheVote contracts, and has heard from more than 200 other sex traders by e-mail. One such volunteer is Chad Vollrath, a 28-year-old English teacher in Pittsburgh. Vollrath says that he was already platonic friends with the Bush-leaning voter he slept with, but the two had long been attracted to one another. "It was a way to, I guess, transgress a boundary in our relationship that hadn't been transgressed at that point," he says. But his interest wasn't only prurient. Vollrath is a fervent Kerry supporter, and wanted to score one more vote for his candidate. He feels confident that the woman -- who now has another boyfriend -- will stick to her promise. "I would probably be somewhat hurt if after the election she said, 'Oh, I voted for Bush.' But I can't see that happening."

Martin of FTheVote says yes. "How could we tarnish a system that's already so tarnished?" he asks. Votergasm's Michelle Collins says that combining sex with American politics is only natural to her generation. "You look at Clinton, you look at Governor McGreevy ... sex does play a humongous role in politics," says Collins. "The only problem ... is that it's always a negative role."

Jennifer Fried is an assistant editor at The American Lawyer.