The Red Sox come back from 3-0 down to beat the Yankees and win the pennant, and everything you've ever known is false. 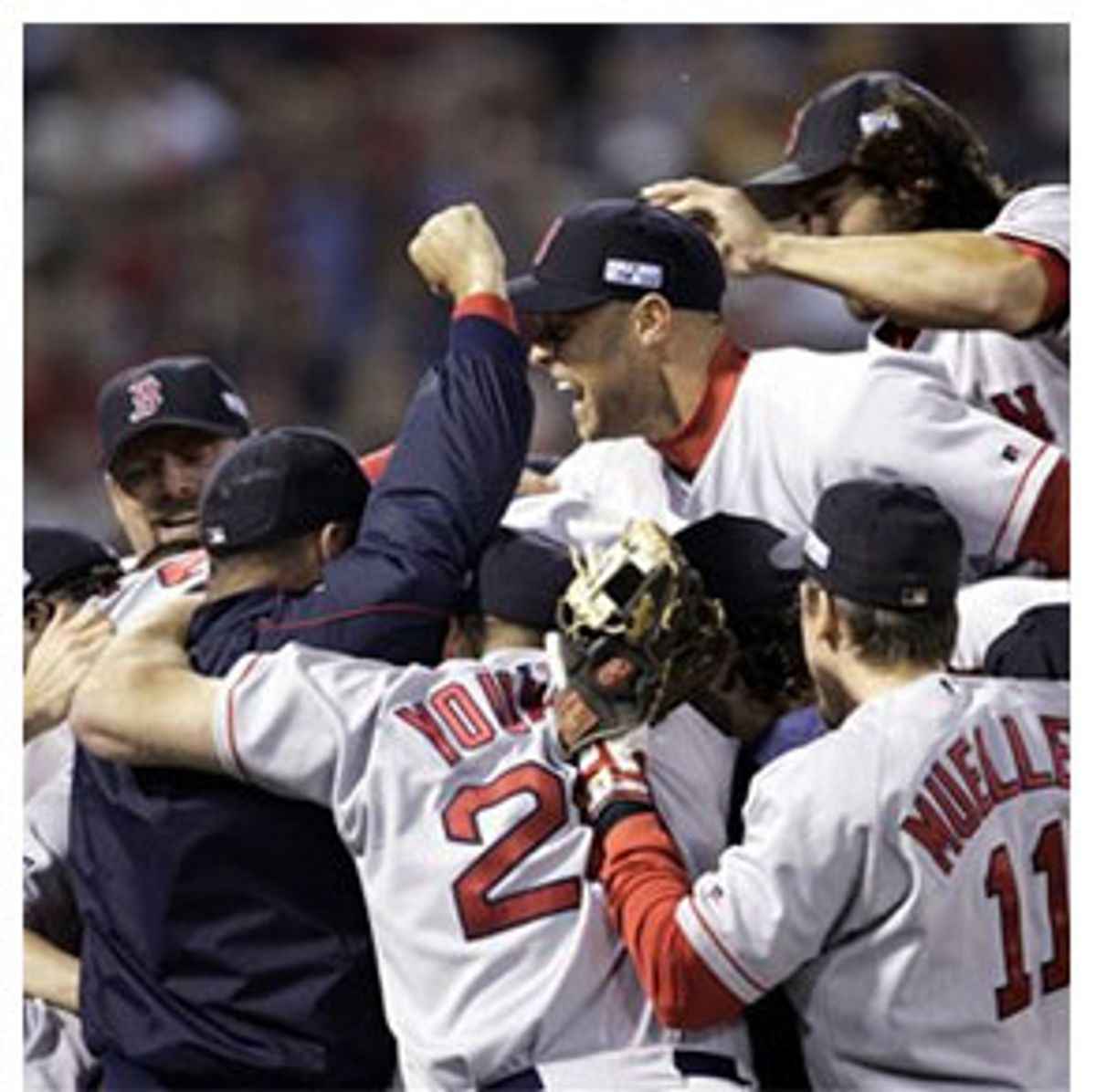 One of the things you grew up simply knowing is true is now false. A baseball team that falls behind 3-0 in a seven-game series can come back and win it after all. It's been done.

And it's been done by the Boston Red Sox, geniuses at finding ways to lose in October. And it's been done to the New York Yankees, who don't suffer epic collapses but cause them, who collect championships like pennies.

Drop a glass of water today and see if the ceiling gets wet. Ask a question to a brick wall and see if you get an answer. Try fighting City Hall.

It's all very simple and rational if you look at it a certain way. The Boston Red Sox won a baseball game over the New York Yankees Wednesday night, something they'd done 897 times before if you count the Yanks' days as the Baltimore Orioles. Derek Lowe, who had won 74 ballgames in his eight-year career with Seattle and Boston, pitched six innings of one-run, one-hit ball to pick up another victory.

The Yankees sent aging, aching, Kevin Brown to the mound and hoped for the best, and the Red Sox scored twice in the first inning on a home run by David Ortiz, who had already homered 44 times this year, playoffs included. Then they loaded the bases in the second inning and the Yankees sent in Javier Vazquez, a starter who had pitched poorly for much of the season.

Vazquez, unused to coming out of the bullpen and needing to throw strikes, threw a fastball over the plate to Johnny Damon, a good hitter who'd been in a terrible slump. Damon figured Vazquez would be looking for Strike 1. Makes perfect sense. He pounced on the pitch and lifted a fly ball down the right-field line. It plopped into the front row 315 feet away. Grand slam, 6-0 Red Sox.

What would have been an out in most parks was a home run because Yankee Stadium has a "short porch" in right, a configuration that favors left-handed sluggers. That's because it was built in 1923, a time when 10,000 was a pretty spiffy crowd, but the Yankees had Babe Ruth, a left-handed slugger whose drawing power made the construction of a 70,000-seater seem like a sharp idea. The Yankees wanted to accentuate the positive.

You may have heard Babe Ruth's name come up in connection with this series. Stop me if you know this but the Red Sox haven't won the championship since 1918, see, the year before they sold Ruth to the Yankees for a mess of pottage or something. This caused a curse to be brought down on the franchise, according to the type of folks who also believe in goblins, fairies, clutch hitting and monsters under the bed.

And now here it was, Game 7 of this most incredible American League Championship Series. Once down 3-0 in the series and trailing in the ninth inning of Game 4, the Red Sox needed one more win to complete an impossible comeback. And the home run that gave Boston a commanding lead and turned the Yankees' faces to ash got an assist from Babe Ruth.

Better check under the bed for monsters. Try teaching an old dog new tricks, fooling all of the people all of the time. Maybe you can get blood from a stone.

The Yankees pushed a run across in the third but another Damon homer in the fourth made it 8-1. The Yankees got two in the seventh against Pedro Martinez, but the magical rally never came. The Yankees, who three nights earlier had been three outs away from their seventh pennant in nine years, their 40th in 83, went quietly. At the end it was the Sox who were scoring. A run in the eighth for 9-3, another in the ninth for 10-3.

Did the Yankees pull a choke job for the ages? It didn't feel that way. They just got beat. After brilliant outings in the first two games by Mike Mussina and Jon Lieber, the Yankees starting pitching was as shaky as everyone figured it would be, and the bullpen wasn't much better. Tom Gordon brought a gas can to the mound. Mariano Rivera left his aura of invincibility in Minneapolis.

Derek Jeter and Jorge Posada didn't hit. Hideki Matsui cooled off -- 9-for-15 with seven runs scored, two homers and 10 RBIs in the first three games, he went 5-for-19 with two runs scored and no RBIs in the last four. The first base tandem of John Olerud and Tony Clark went 5-for-33.

Meanwhile Curt Schilling turned in a Game 6 start on a bum ankle that's already the stuff of October myth. Ortiz, the series MVP, slugged and slugged. The bullpen was righteous. Boston made one error in the last four games.

All that happened is that the Red Sox won four straight, something they'd already done eight times this season. And now they're going to the World Series, which they've done nine times before. It's really nothing more than that.

Well, that and a world turned upside-down.

Carrot Top is funny today. Cats are chasing dogs, kids begging for liver. See if you can pick up a railroad car. Look for the sunset in the east. Ask Beyonce for a date. You just don't know anymore.

Astros vs. Cards gets the spotlight [PERMALINK]

Finally, after six games of a tense, exciting, topsy-turvy series, the Astros and Cardinals get the stage to themselves Thursday. Game 7 of the NLCS is Thursday night in St. Louis, with Roger Clemens trying to pitch his swan-song team into the World Series against his rookie team.

The Cards stopped a three-game skid Wednesday in another humdinger of a game. The Astros were down 4-3 entering the ninth but tied it on a run-scoring single by Jeff Bagwell off St. Louis closer Jason Isringhausen. Astros closer Brad Lidge was a mystery to the Cardinals hitters, as he has been to everyone with a stick in his hand all year.

But Lidge only had three innings in him, the ninth, 10th and 11th. In the 12th it was Dan Miceli, a very different animal. He walked Albert Pujols, got Scott Rolen to foul out, and served up a monster home run to Jim Edmonds. Cards win, 6-4.

The series has stayed on serve from the start, the home team winning every game.

Whoever wins Game 7 will set up story lines galore for the World Series. The Astros coming from mid-August oblivion to win the pennant. The second all-wild card Series in three years. The Cardinals avoiding the colossal upset and continuing what's seemed like an unstoppable championship run since they got hot late in the spring.

And then there are the Red Sox stories. Roger Clemens trying to cap his great career by beating his original team. The Sox 0-for-2 in the Series against the Cardinals, losing in 1946 and 1967, both times in seven games. If the public discourse were as raw in 1946 as it is today, one of the Cardinals' Hall of Famers would be known in Boston as Enos F. Slaughter.