Welcome to the Parade of October Surprises!

Block the vote. A loofah in every shower. One flu over the Cuckoo's Nest. There's no telling what we'll see! 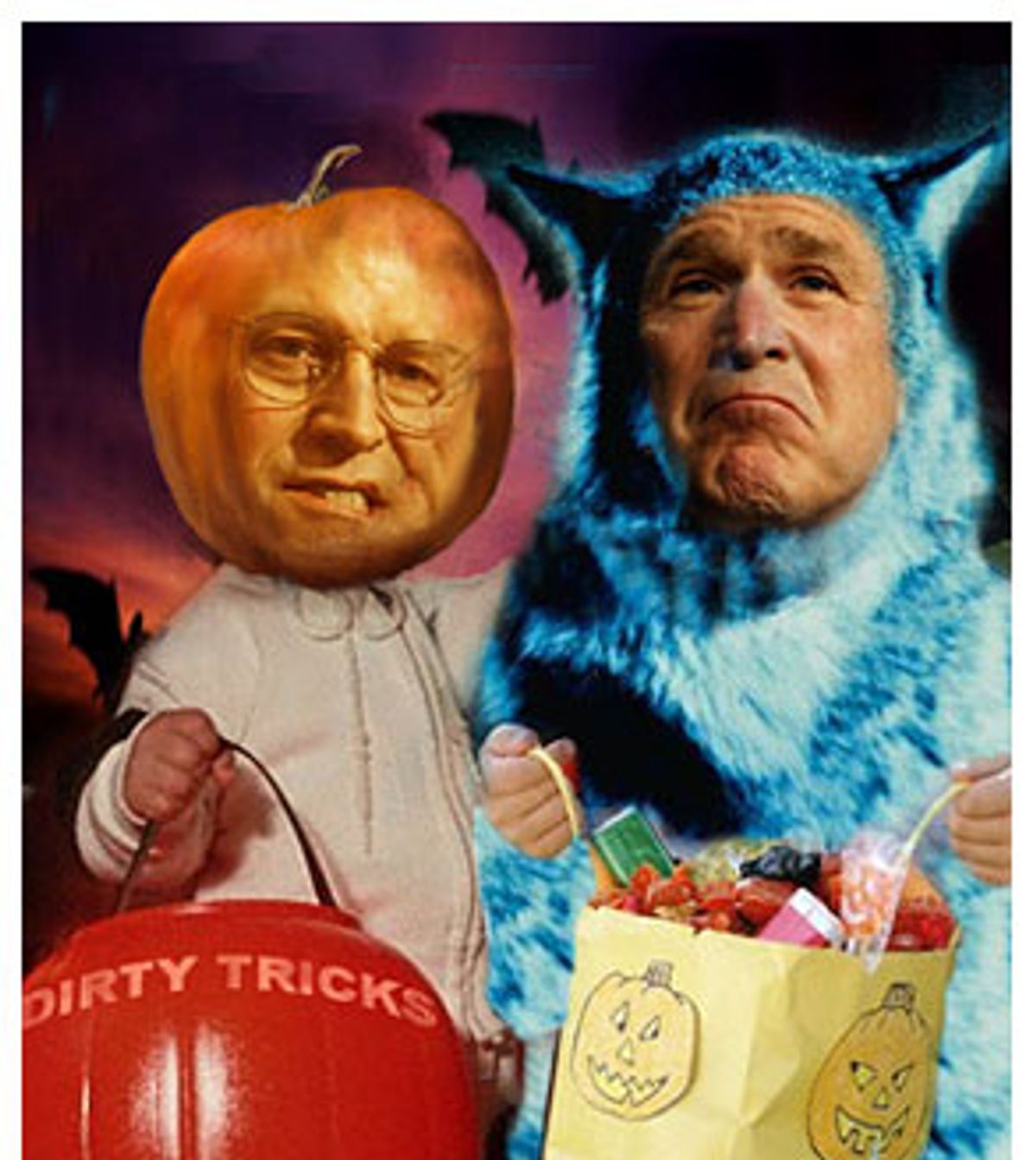 Welcome back to our live coverage of the 2004 Parade of October Surprises! I'm Cutie O'Horan and ...

... I'm Slab Manley coming to you live from Main Street USA Now over to you, Cutie.

Thanks, Slab. Well, we've got gorgeous weather coming at you for today's up-to-the-minute insults to your intelligence. Washington Weatherbird Dick Cheney says the forecast calls for scattered loudness with partial fearing and outbreaks of nuclear bomb attacks at all suburban garage sales.

Tee-riffic! Time to dust off the ol' hip boots, Cutie!

That's right, Slab. Oh, look here comes the next October Surprise. "The Las Vegas Voter-a-Go-Go" is a spectacular piece of work made entirely of shredded voter reg forms, each one painstakingly signed by would-be new Democrats. But now all that boring paperwork has been made over into flashy, trashy trickery that's sure to be all the rage from Toledo to Tampa.

You can do anything, but lay offa mah blue state ruse!

Don't be cruel, Slab, we all know Nevada is a red state!

Well, it is now, Cutie! Ba-da-boom! Say, isn't that the "Freedom Is On The March" Marching Band?

Sure is, Slab! They're Baghdad bound amid new reports that the threat of nuclear proliferation by North Korea and Iran has increased over the past year and will probably get worse.

Freedom isn't free, Cutie! And speaking of freedom -- oh, sorry, what's that? Breaking news from Oregon -- three teachers have been arrested at a Cheney-Rove Reappointment Rally for showing up in T-shirts that displayed the words "Protect our civil liberties."

Oops, sorry, Cutie. I'm used to late night. Thank goodness, Sinclair will bleep it out. And now on to our Special Supreme Court Judges Award, sponsored by "Block the Vote 2000 -- Now with 20 Percent more Voter Suppressant!"

And not to be left behind, Slab, the 2004 Florida "Veto the Vote" Fraud Committee has really outdone themselves this year. Just look at this beauty, a mixed-media panoply of intimidation, coercion, government intervention, criminal negligence, corruption, and improper election record purges. I haven't seen anything so brazen since my cell phone company started offering free loofahs as part of their "Reach Out and Harass Someone" calling plan.

And now for the "I Ran and I Did Hide" Award, which goes to a float inspired by elusive terrorist Abu Musab Zarqawi. Zarqawi is now the center prop on a perpetually spinning float entitled "Carousel of Reasons to Attack Iraq."

Groovy-tunes! So now we're there to catch Zarqawi? Wait a sec, I thought the latest reason we were there is because Saddam Hussein abused the U.N. "oil for food" program.

That's so last week, Cutie. Try to keep up! Of course, the Bush administration had three separate chances to catch Zarqawi before the war.

Well, that's no fun. Anyway, so they ignored a real and growing lethal threat at a cost of thousands of lives while pursuing a personal agenda into unjustified, deficit-draining war with no end in sight. At least they didn't acknowledge Cheney's lesbian daughter.

Right, not even Cheney would do that. Remember when he invited her up onto the stage with the rest of his family after the Republican National Convention?

Exactly. See, the guy has standards. Like he says, he is one angry father -- just ask Sen. Leahy. This Kerry character -- well, put it this way. Do you really want to go to sleep at night knowing that there is absolutely no hypocrisy agenda to put before the American people?

What, no hypocrisy agenda? Slab, stop! This is a family show. Don't listen to him, children.

Relax, we've got all kinds of hypocrisy coming at the American public. Just look at this float.

Entitled "One Flu Over the Cuckoo's Nest," it features nearly 2,000 lawmakers and staffers receiving flu shots from the Capitol's doctors, who urged them to be vaccinated -- even those not in high-risk groups -- because of their routine contact with -- can I say this on the air? -- people.

Ew, gross! I never have contact with people. I just report what I imagine they're talking about. Like yesterday, my nanny takes my nine-year-old, uh, son, daughter, whatever, to a Britney Spears concert and Britney goes, "What Americans really care about is --- " hey, hold on. I just had a news-like thought and I don't want to lose it. Didn't George Bush tell Americans that if they were young and healthy they could ix-nay the u-flay ot-shay?

That is exactly what he said, Cutie. Now follow that to its logical conclusion. Not enough vaccine, 45 million people who've been without insurance so long that the only time they see a doctor is on "General Hospital" -- which, by the way, is a great antidote to suicidal depression over your long term unemployment, folks ...

To quote my favorite PSA, "The more you know!"

That's right, Cutie, but keep that bouffant you call a brain on topic here for a second. See, it turns out nobody really needs health insurance -- well, except rich people. You know, eating disorders, rhinoplasty, that sort of thing.

Phew! I feel so much better about America now. Oh, look at the "Burning Bush and Chatty God" float. That's my favorite! But gee, I can't hear a thing God's saying.

No, only George can hear God. Pat Robertson was just lying his fundamentalist ass off the other day, right, Karen Hughes? Now as we bow our heads in prayer and cut to this commercial about erectile dysfunction, count your blessings that we're not going to have a draft.

We're not? Goodie! Gee, Slab, how do you know all this stuff?

Because George Bush said so, Cutie. Even God didn't have the scoop on that one.

Well, Slab, no wonder we news gals 'n' guys haven't looked into it. The word of George Bush is good enough for me! OK, everybody, coming up in our next segment, the sweetest October surprise of all -- "Terms of Endorsements" a float that brings together Russian democracy defender Vladimir "Who needs elections?" Putin and the head of the security council for Iran, Hasan Rowhani!