The Bushies wrecked my party!

A mean guy named Dick ordered my guests around, some halfwit named George broke everything, and this Karl creep really befouled the air in my bathroom. 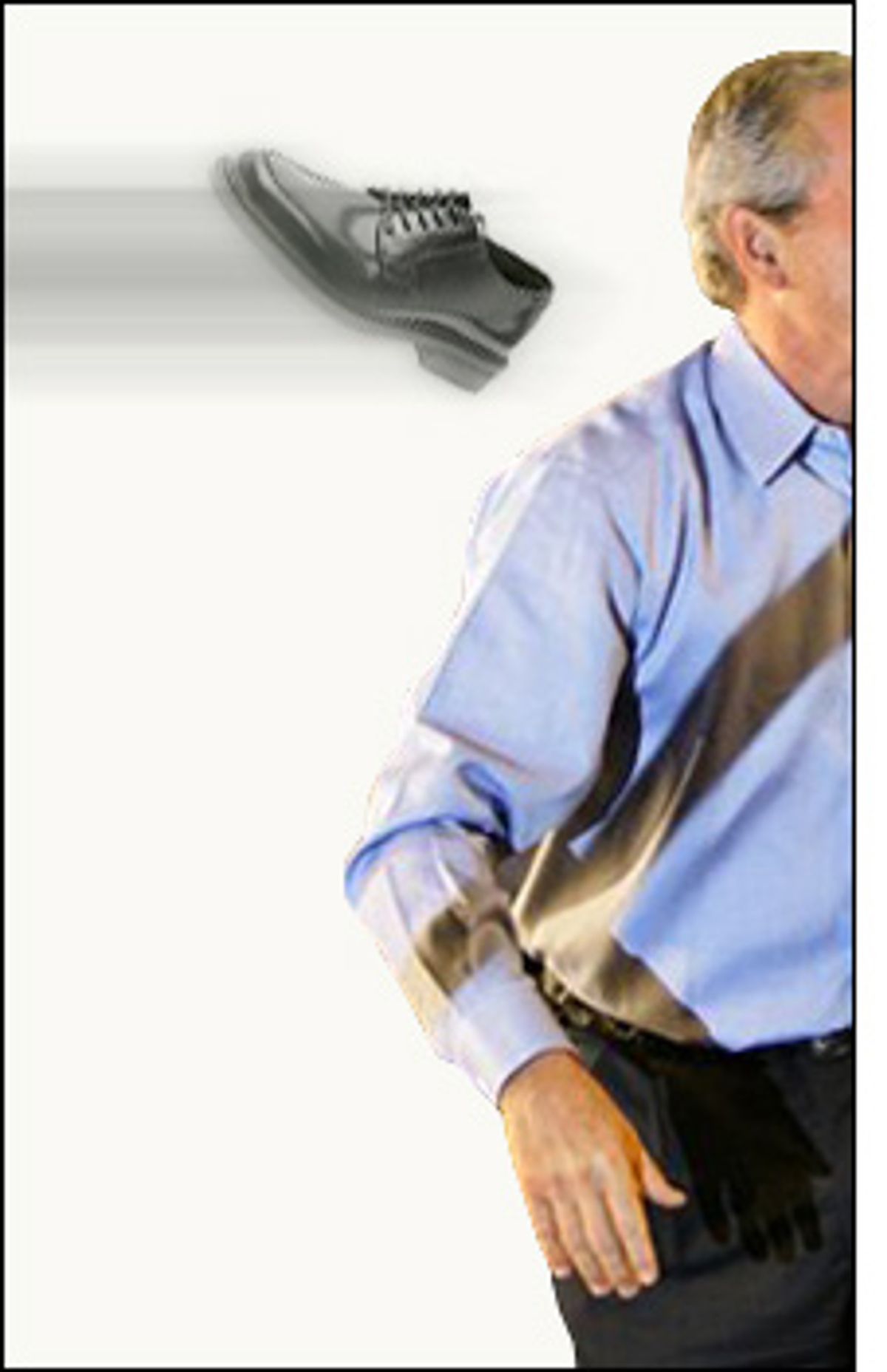 You're the host of a cocktail party. It's for your friends and neighbors, and it's in your house, which has been passed down through generations in your family. You have laid out the food on your grandmother's china and poured the drinks into your great-grandmother's crystal. Guests now sit on your father's leather library chair and perch on the edge of your mother's velvet sofa. They admire the painting by your great-great-grandfather, and coo over the ceramic platter that your great-great-great-grandmother brought with her from Italy. They praise the perfect little hors d'oeuvres that you've spent all day making. You're glad that this has panned out, since your back hurts from crouching over the cutting board for 10 hours. The guests discuss how happy they are to live in this neighborhood: Such a nice place! Such nice people!

The doorbell rings. It's your new neighbor, George, and his friends, whom you warmly welcome. The other guests also stand up to greet them. After the most minimal of niceties, your new neighbor and his colleagues fan out. They gobble up all the hors d'oeuvres without chewing them, and slurp up the wine you've been storing for years. One of them single-handedly polishes off the nicely aged bottle of Bordeaux that your father passed onto you -- rather than drinking it early himself, he'd said, it was more important for someone else to have it when the time was right. Another of George's friends -- Donald? -- drops his full glass of red wine onto your great aunt's Persian carpet; the crystal shatters.

And still another one -- you think he was introduced as Karl -- locks himself in the bathroom for 10 minutes. When he opens the door, the foul smell of digested matter gusts into the living room. He strolls into the kitchen, and you follow him.

"What are you talking about?" he asks.

"No thanks," you say. "I don't need to. It's pretty obvious. Could you light a match at least? I mean, we're in the middle of a party. The matches are on the back of the toilet."

"I don't have the slightest what you're talking about," he says, opening the refrigerator and pulling out the leftover beans and rice you were going to eat for lunch tomorrow.

"Then what were you doing in the bathroom?" you ask.

He chews loudly, but this doesn't stop him from speaking. "I was never in the bathroom," he says. He pats you on the shoulder. "Maybe you should stop drinking so much."

You leave him to your leftovers and return to the living room. It smells like sewage, but people seem to be getting used to it, although they do look a little unhealthy. It's then that you notice that one of the other new guests is taking books off your bookshelf.

He slides the books into his shoulder bag. He does not speak to you, does not even acknowledge you're there. Maybe he's deaf, you think. You hear a crash and spin around. All of the guests are looking into the dining room, where George has knocked your great-great-great-grandmother's ceramic platter onto the hardwood floor, where it has broken into a hundred pieces.

"You should have carpet in here, you know," he says. "It's kind of amazing that someone your age doesn't know that."

"I'm sorry for the way they're all acting," says one of George's friends. Colin, you think his name is. "But there's nothing I can do about them. I'm just going to leave and pretend I didn't see this, OK?" He walks out the door, whistling.

"All right, everyone, please stand up from your seats," says Dick. "This is an important matter." He says it with such a firm voice, with such conviction, that the guests all stand up. As if instinctually, they put down their glasses and plates. No sooner have they done that than George's friends whisk the plates and glasses away.

"I love this pattern," one of them says. He places it into a box. Wait, that's one of your moving boxes! It had been packed away in the basement! How did they find it?

"I'm very experienced and very smart," Dick continues, "and you're not."

As he speaks, you see that George and his friends are taking your furniture! They're carting it outside like movers, bad movers, knocking over heirloom vases and picture frames as they go. You want to cry out, but there are so many things going wrong right now that you don't know where to start. Only the couch remains, because Karl has passed out on it, dribbling enchilada sauce. You end up making a vague noise of distress, something like, "Ehhhhch."

You feel a tap on your shoulder. It's Dick. "We can't find the soup tureen. Where is it?" he asks.

He snorts with exasperation and begins to speak slowly, as though you were a third grader. "If we don't find the soup tureen, we won't have a full set of china. You should be able to grasp that despite your mental deficiencies. Now, where is it?"

You point in the direction of the basement. "And the silver?" he asks.

You come to your senses. "My silver? Why on earth do you want my silver? Why are you taking all my stuff?" you shriek.

Dick again affects the demeanor of an elementary-school teacher, albeit one at her wits' end. "If you have fine china, you have to have silver to go with it," he says. "Duh," he adds.

Something is wrong with you. You find yourself saying, "It's in the basement in a mahogany box, next to the wine rack."

Dick and his cohorts shuffle off to the basement. You're in shock; you know you're in shock. Do something, your brain tells you. Do something. But you don't know where to begin. You glance up and see that the other guests are in a similar fog of dismay. They're standing, looking dully into the middle distance, empty-handed.

For a few moments, you're in a stupor. When you look up again, all of your prized possessions are gone and -- what's more -- George and his buddies are prying up your floorboards. "Need some wood?" George says. "Heh. Don't worry. I saw that you've got some trees out there. It'll grow back. I like to clear brush myself."

You survey the damage. Your floorboards are destroyed; your furniture is gone; your food has been eaten; your books have been stolen. And everything that hasn't been taken is broken.

George comes back inside the house and pats you on the shoulder. "Great party," he says.

"What am I supposed to do?" you ask. "What about my children?"

"Are you kidding? You've got everything going for you," he says. "Just look outside. Big yard. Organic farming. A growing market. Lots of opportuniteries."

Karl wakes up and stretches. He snaps his fingers, and the others come rushing back in to pick up the sofa. One of your friends manages to speak for you. "You can't take that couch! It's not yours!" she says.

George and his friends pause; you think they're going to bring the couch back in. Instead, they turn it upside down and shake it. A couple of quarters and several pennies fall onto the floor. George scoops them up and hands them to you. You stare with horror at the 58 cents in your hand.

"There you go," he says. "Most people wouldn't give you that, you realize. But it's your money and you should have it."

Sarah Rogers is a freelance writer in Iowa City, Iowa.