Tip of the iceberg

As I learned while embedded in Iraq, the highly lethal explosives stolen from Al Qaqaa are just a fraction of the mountain of poorly secured munitions that could be turned against U.S. soldiers and citizens. 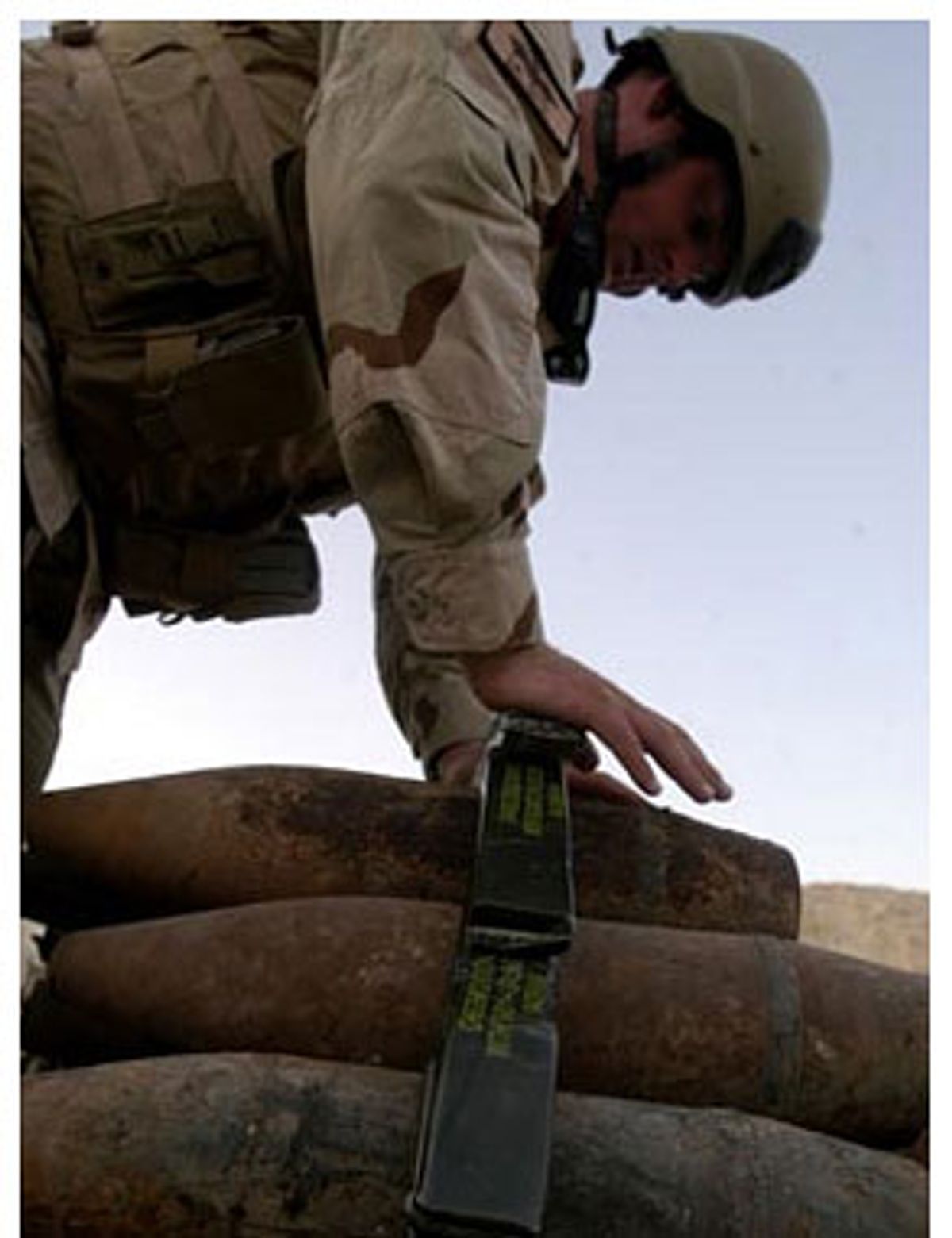 Monday's New York Times contained a front-page story describing the disappearance of nearly 380 tons of high-powered explosives from a sensitive weapons cache outside Baghdad known as Al Qaqaa. "60 Minutes" plans to air a story on the subject Sunday evening, one day and a wake-up call before the election gets underway. Given that the types of explosive materials that have gone missing are essential in the manufacture of nuclear weapons and car bombs and that they were used in several high-profile terrorist bombings -- including the 1988 downing of Pan Am Flight 103 over Lockerbie, Scotland -- this untimely revelation could be the much-prophesied, but so far missing in action October surprise. Hoping to capitalize on the story and sully President Bush's self-styled image as the ultimate enemy of terror, John Kerry described Al Qaqaa as "one of the great blunders of Iraq, one of the great blunders of this administration."

However disturbing this story, what the New York Times and CBS News have overlooked so far is that the missing munitions at Al Qaqaa are only the tip of the iceberg and in all likelihood represent a mere fraction of the illicit explosive material currently circulating in Iraq. Having personally toured weapons caches comparable in scale to Al Qaqaa and seen similar ordnance in the process of being converted into roadside bombs at an insurgent hideout, I believe that the theft and redistribution of conventional explosives and weapons represent the largest long-term threat to American troops in Iraq. Strangely enough, it is likely that dealing with this conventional weapons threat, rather than eradicating the mythical unconventional WMD threat, will be the U.S. legacy in Iraq.

In mid-May, halfway through my brief tenure as an embedded reporter in Iraq, I found myself stuck in what was generally considered to be a dismal backwater of the war, a logistics base far from the action known as Camp Taqaddum, or "TQ" as the Marines call it. Like a fool, I was anxious to get to Fallujah, where I was scheduled to link up with a Marine infantry battalion, and I pressed the media liaison officer to whom I was assigned, a spry female captain named Kristen Lasica, to hook me up with a convoy bound for the fray. Somewhere, anywhere but TQ, I thought.

Sensing an opportunity for some free advertising, Capt. Lasica suggested that I head out to this really bizarre Iraqi weapons stockpile that some of the military engineers were sorting through on the outskirts of the camp. One of her corporals, a Marine combat correspondent, was already heading out that way, so why didn't I just tag along? (I later learned she had been pitching the story to passing journalists for months, but they always seemed preoccupied with the Fallujah problem or Abu Ghraib.)

After some searching, we eventually arrived at the copiously sandbagged headquarters of the U.S. Army's 120th Engineer Battalion, a National Guard unit from Oklahoma that is responsible for the Taqaddum weapons cache, or CEA (captured enemy ammunition) site for short. As I would later learn, the 120th had, for all intents and purposes, become the caretaker of Saddam Hussein's grotesque legacy in western Iraq: a vast, murky labyrinth of bunkers, tunnels and sandpits that contain a staggering menagerie of exotic bombs, bullets, shells, mines, missiles and torpedoes. All told, there are 103 known sites in the 120th's sector, encompassing approximately 100,000 of the estimated 600,000 tons of high-density explosives strewn across Iraq.

The soldiers of the 120th have inspected 64 of these so far and have, as of the last reporting, destroyed 12,000 tons of Iraqi ordnance. Capt. Elmer Bruner Jr., 41, of Bixby, Okla., one of the officers in charge of the disposal effort, described the undertaking as "a multiyear project that I expect to turn over to our replacements in a year's time having only completed a fraction of the work." Later, as I learned more about the scope of the task they faced and considered the similar endeavors I had read about in Afghanistan and Bosnia, I blurted out, "This looks more like a multigenerational job." Bruner glumly nodded his head.

Indeed, the breadth and depth of the problem of captured weapons in Iraq are difficult to definitively assess, let alone describe, and whenever I pressed Bruner for clearer answers, he would simply shrug and say, "There's so many things that we just don't know." About the only thing he could tell me for sure was that the 120th is just taking the first steps in what will be an extremely long process of disarming the Iraqi countryside.

To visit a captured weapons site the likes of which I saw at Taqaddum is to witness the byproducts of unfathomable delusion and malfeasance and to parse the chilling dreams of a lost regime with an unquenchable desire for ever-larger and more grandiose weaponry and death-dealing machinery. Surveying the kaleidoscope of munitions at Taqaddum, I could discern no real rhyme or reason to it at all. There were scores of 6,000-pound anti-ship bombs of Chinese manufacture, for which the Iraqis never possessed aircraft capable of lifting. Strewn throughout the maze of bunkers and sandpits were hundreds of bombs of South African, Chilean, Soviet, West German, Yugoslav, Czech and U.S. origin, almost all of them sitting on wooden pallets, left to the mercy of the elements and the wild dogs that haunt the place.

Much of this ammunition was decades old. Many of the bullets and bombs found at Taqaddum corresponded to weapon systems that have been obsolete for decades. It was as if someone had given their crazy uncle $10 billion and said, "Buy whatever you want, so long as it explodes." The tour guide for this potpourri of death, Capt. Bruner, mentioned that the Russians had probably been dumping untold amounts of obsolete ordnance on the Iraqis for years, exploiting Saddam's compulsive desire for power to obtain cold, hard cash.

The threat posed by stockpiles like those I saw at Taqaddum is disconcerting, but what makes the situation infinitely worse is the realization that of the 103 weapon sites that the United States is aware of in western Iraq, only a handful are ever guarded on a regular basis, which means that insurgents bent on killing Americans have easily accessible and free material with which to make bombs of all sorts. Understandably, Bruner wouldn't give me an exact figure on how many of the sites are monitored at any given time, but it was abundantly clear that he and all of the soldiers of the 120th Engineer Battalion were doing the best they could with the limited resources that they had. (Most of the Marines' engineers have been tasked with locating and defusing roadside bombs that are found by infantrymen operating in the cities, a duty that saves countless American lives but still leaves the lion's share of the work to the 120th.)

The plight of the 120th is emblematic of the U.S. military's larger problem: There simply aren't enough American soldiers in Iraq to guard and dispose of all of the weapons stockpiles we know of, and even if there were they would have to be in place for decades to ensure that the country was picked clean of weapons. This is, arguably, one of the foremost drawbacks of Secretary of Defense Donald Rumsfeld's transformational strategy for conquering Iraq: When the initial combat phase was concluded there weren't enough troops to saturate and pacify the entire country.

Adding to the 120th's woes, many of the caches that were uncovered immediately following the successful conquest of Iraq last year were improperly handled and surveyed; in some cases troops attempted to blow up the munitions where they found them, inadvertently scattering unexploded bomb material in all directions. Cleaning up such sites further complicates an already Byzantine enterprise.

Regarding the general situation of unaccounted-for explosives, physicist and weapons expert Ivan Oelrich, a former consultant for the U.S. Army and now with the Federation of American Scientists, put it this way: "I'll bet if you took all the car bombs that have gone off in Iraq in the past six months and tallied them, [they] would add up to a couple of tons of high explosives. So if they're doing what they're doing with two or three tons, what difference does it make if they have 380 more?"

Without being cavalier about the weapons loss at Al Qaqaa, it is crucial to remember that the cache is just one repository among thousands in Iraq. The real and persistent danger is that America's continued mismanagement of the arms caches across Iraq is arming and equipping the very enemy the United States is dedicated to destroying and providing a key service to the insurgency.

In discussing Iraq, it is easy to overuse Vietnam analogies, but it is nevertheless worth remembering that one of the key developments in the early stages of that war occurred in early 1962 when the Viet Cong began acquiring stolen U.S. small arms through the black market. For a budding insurgency beginning to solidify its movement, there are few things more invigorating than a sudden inrush of weapons and equipment. In the larger context of a shifting battlefield, such a development is oftentimes a catalyst for an even wider and deadlier war.