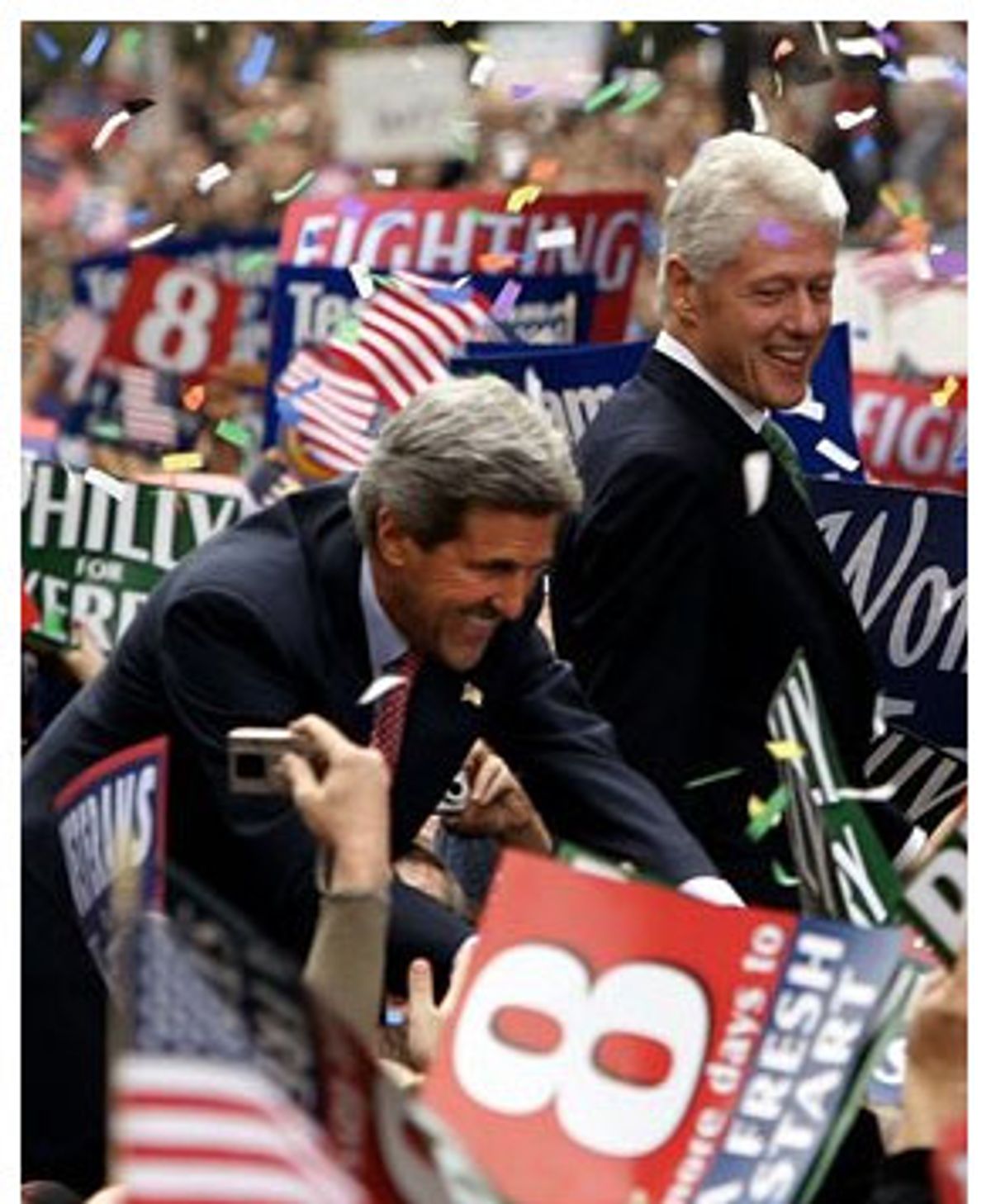 Four years after Al Gore left him sitting on the sidelines and seven weeks after heart troubles left him thinking that his life -- never mind his political life -- might be over, Bill Clinton was back Monday doing what Bill Clinton does best.

The former president and the man who would be the next one appeared together Monday at an outdoor rally estimated at more than 100,000 strong -- so big that it spilled out of Love Park and into the streets of Philadelphia's Center City. Although Clinton was subdued in speech, he was effervescent onstage. As his own campaign theme song blared over the loudspeakers -- will Fleetwood Mac always give Democrats the chills? -- Clinton hugged old friends, laughed that big laugh of his, and looked like there was no place in the world he'd rather be. "If this isn't good for my heart, I don't know what is," he said.

With exactly one week to go in the presidential race, Clinton will have plenty of opportunities to take the cure. He will campaign in Florida Tuesday before heading west to New Mexico and Nevada at the end of the week. He'll make those stops without Kerry. The candidate campaigned Monday night in Michigan and Wisconsin and will travel next to Nevada, New Mexico, Iowa, Minnesota, Ohio and then Wisconsin again before returning for his 26th visit to Florida on Friday.

It's a big map, and it's a far cry from the three-state circuit that many observers thought Kerry and Bush would be running this week. Conventional wisdom said that Ohio, Pennsylvania and Florida were the big three battleground states, and that whoever won two of them would almost certainly win the presidency.

It hasn't turned out that way, at least not yet. From the look of most polls, Kerry has Pennsylvania about as locked up as it's going to get before volunteers start driving people to the polls next week, and the Bush campaign has all but acknowledged that it's going to need to find a way to win without Ohio. That's the good news for the Democrats. The bad news is that Bush is doing well in several states Gore carried in 2000 -- well enough that he might survive the loss of Ohio and Pennsylvania so long as he wins Florida.

That's why Kerry will spend much of this week in what were once second-string battlegrounds. There are no gimmies on the list -- if any of the states were easy wins for Kerry, they wouldn't be on the list. But some of the states present bigger challenges than others. New Mexico is effectively tied. Bush appears to be up a little in Wisconsin, and he is up 1 or 2 or 6 -- depending on which poll you believe -- in Minnesota.

Bush owns Iowa for now, although Kerry made a play for the state Monday when he vowed to call a farm summit in his first 100 days in office. And the Silver State of Nevada seems awfully red, but -- if the resources being thrown at the state are any guide -- the Kerry campaign sees room to make a move there. Clinton sees hope in Arkansas; Kerry spokesman and former Clinton press secretary Mike McCurry said Monday that the former president believes Democrats have an "opportunity" in Arkansas, and he'll campaign there over the weekend in an effort to exploit it.

McCurry denied that the Kerry campaign was using Clinton in a targeted way to avoid offending swing voters who may not share hardcore Democrats' love for Bubba. "There's nothing targeted about a rally with 100,000 people," he shot back when a reporter asked Monday. Still, it's clear that Clinton will be deployed, at a minimum, to bolster the black vote. African-Americans played a highly visible role in Monday's rally -- Carol Moseley Braun and Philadelphia Mayor John Street both spoke, and Patti LaBelle sang the National Anthem -- and Clinton and Kerry put in a call afterward to ministers in predominately black churches around the country.

But don't look for Clinton to offer up Sharpton-style sermons on the trail. Whether it's his health, his temperament -- Clinton said over the weekend that he cares more about policy and a little less about politics than he used to -- or his desire to remain presidential and a little above the partisan fray, Clinton was a relatively quiet campaigner Monday. Al Gore ripped into George W. Bush Monday, saying he dragged the nation into "another Vietnam." By contrast, Clinton said next week's election presents a "clear choice between two strong men with great convictions." Clinton clearly prefers Kerry's convictions, but he was almost emotionless as he said so. He offered up a dry wonky stew of job numbers and healthcare statistics, and he said America could do better -- but not with George Bush. "Their plan is more of the same," Clinton said. "They gave two huge tax cuts to upper-income people like me and to special interests, they've run these big deficits ... and they're saddling it on our children. John Kerry's got a better plan."

Strikingly, Clinton said little if anything about Iraq. Other politicians onstage clapped and cheered when Kerry mentioned the administration's "incompetence" and "arrogance" in the conduct of the war. Clinton kept his hands clasped tightly behind his back, joining in the applause only when Kerry offered up the obligatory tribute to troops in the field.

The contrasts between Clinton and Kerry were clear, but not as clear as they would have been just a few months ago. Kerry was an unimpressive and meandering stump speaker, and Clinton was the impossibly energetic hero of his party's past glory. But all that debate training has sharpened Kerry's game, and quadruple bypass surgery has taken a step away from Clinton's. Kerry will never match Clinton on charisma or style. Whatever Kerry paid for his suit, it suddenly looked a little cheap Monday. And if Clinton was the nation's first black president, Kerry will always be the white guy at the disco; Clinton is a natural onstage, and Kerry's moves -- the thumbs up, the point, the salute that's too long by half -- come off as studied and forced by comparison.

But Kerry is physically stronger than Clinton right now, and his speech Monday was more muscular. As his voice echoed through the streets of Philadelphia, Kerry launched into his double-pronged pitch for the final days: George W. Bush has made a mess he can't see at home and abroad, and the country needs a "fresh start" with an administration that keeps faith with America's values.

To no one's surprise, Kerry focused hard on the news of the day -- the report that the United States has somehow lost track of 380 tons of ammunition that used to be stored at a base south of Baghdad. A pound of it is enough to bring down a jetliner. Kerry said the news was the latest proof that Bush has "failed the test of commander in chief."

"George W. Bush talks tough and brags about making America safer, but once again he has failed," he said. "Today, America has learned that those stockpiles are missing. They're unaccounted for and they could be in the hands of terrorists."

But Kerry's speech was more about hope than fear, a point that he and Clinton made repeatedly. "Now, one of Clinton's laws of politics is this," Clinton said. "If one candidate's trying to scare you, and the other one is trying to get you to think, if one candidate is appealing to your fears and the other one is appealing to your hopes, you better vote for the person who wants you to think and hope." While Dick Cheney travels the country warning of the nuclear threat that awaits if John Kerry is elected, Kerry asked voters to think of better economic times, of healthcare for children and jobs for people who want them. And he brushed away Republican criticism that he and John Edwards have offered "false hope" about the potential of stem cell research. Recalling the development of vaccines for polio and smallpox, Kerry said: "We're not going to take anyone's hope away."

There was a man on the stage who knew exactly what he meant.